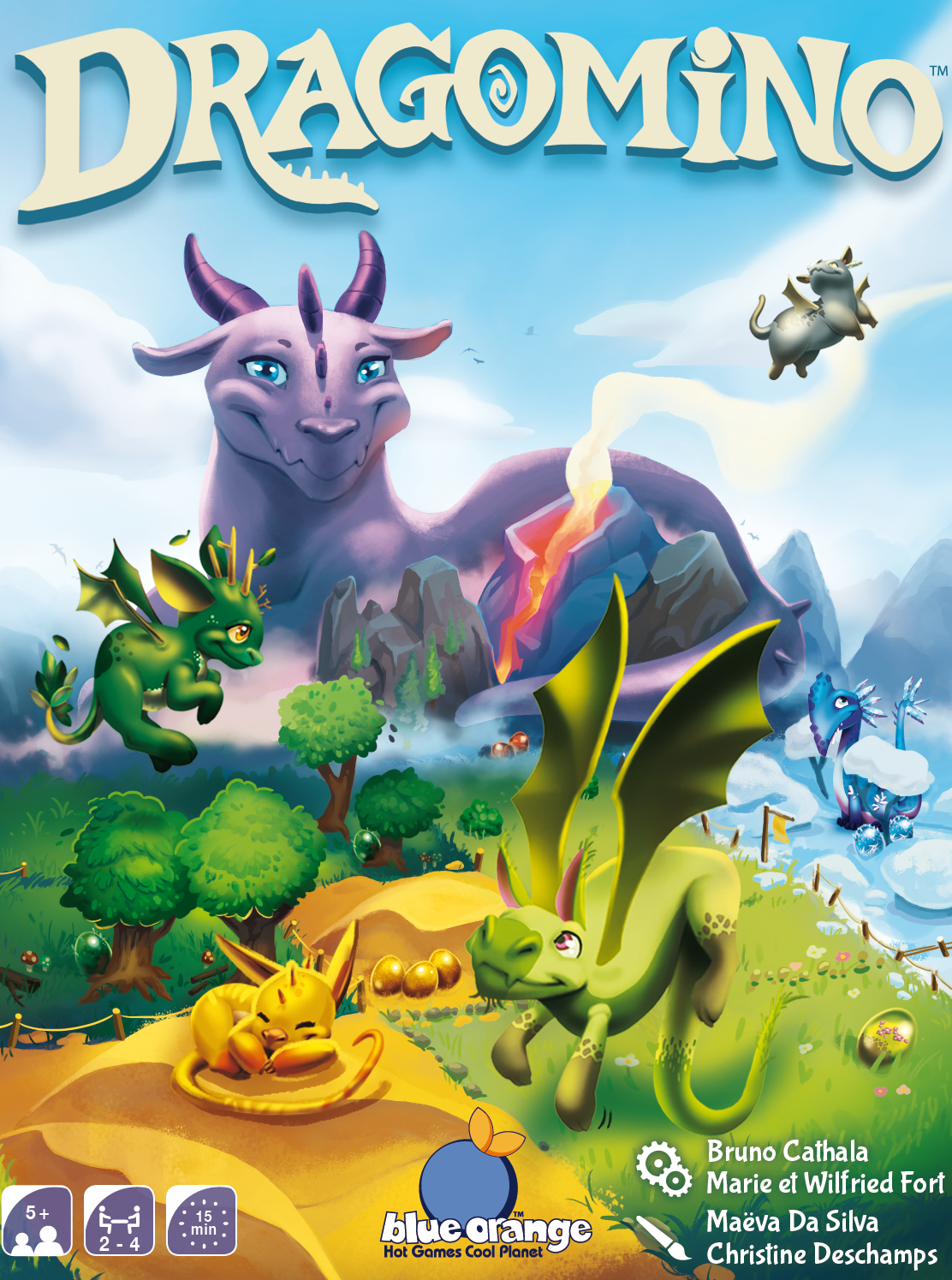 In 2017, Kingdomino deservedly won the Spiel des Jahres, leading to an expansion, an expandalone, and a spinoff. Next in line is the children’s version, not unlike My First Carcassonne or Kids of Catan.  My 6-year-old can play Kingdomino just fine, but the somewhat complex scoring keeps some of the strategy above her head. So, I was quite excited to play a more accessible version with her, and she was quite excited about the “mommy dragon” and baby dragons eggs. How’s it play, though? Let’s look! 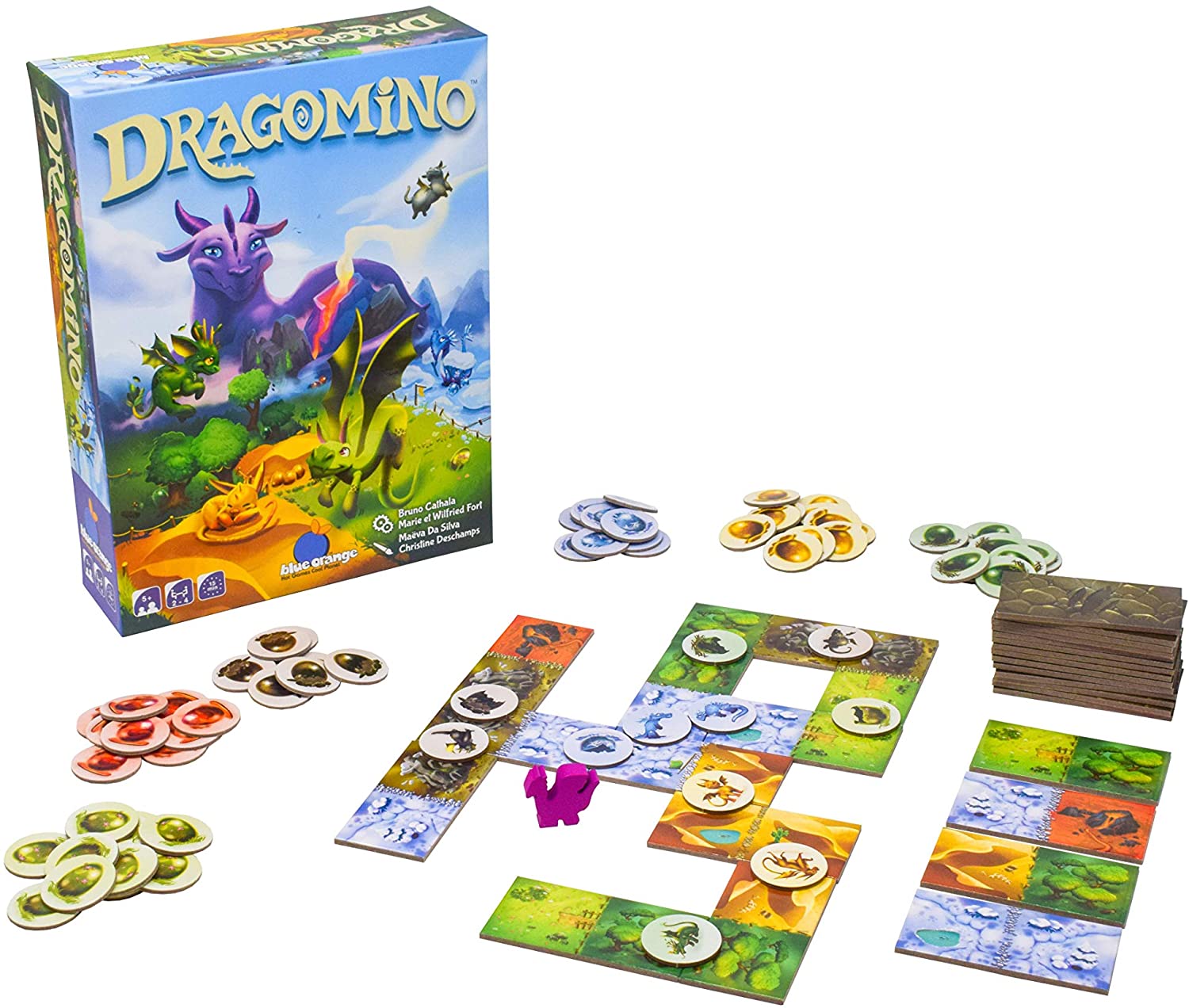 Dragomino is quite easily explained, so I will summarize here. Each player has a starting tile, and drafts new tiles in clockwise order. If you make two landscapes of the same kind meet, you get an egg of the corresponding color. On the back of each egg, you’ll either see a baby dragon (worth points) or an empty cracked shell. While the shells are not worth anything, they give you the “mommy dragon” token, otherwise known as the first player marker. After eveyone has played, a new set of tiles are laid out to be drafted, until the tiles are all gone. Points are scored for baby dragons, as well as for being the last person to have the “mommy dragon” token. That’s really it.

What’s amazing to me is how much of Kingdomino’s DNA is retained in such a simpler game. It is still a matter of matching tiles cleverly, despite the discarded rules about adjacency and 5-by-5 grids. Turn order still matters significantly, even if it is primarily a clockwise action with only the first player moving. Differential landscape valuation is still there by virtue of the dragon tokens, instead of the tile distribution. It really does still feel like Kingdomino. Except cuter.

In fact, that cuteness shows Dragomino’s cleverest trick. I thought that my daughter would be disgruntled the first time she got a dragon egg that was only a cracked shell, but she was absolutely elated to get the “mommy dragon” token. On the other hand, with valuations being centered around the distribution of eggs, we could talk to her about probabilities (not in those terms) and which landscapes she should connect to increase her likelihood of getting baby dragons. But no matter the result, I had a happy kid. And isn’t that kind of the point?

My one complaint about Dragomino is about setup. It’s so minor, but the eggs are a bit of a pain to lay out and put back up, making setup just a hair longer than regular Kingdomino. On the other hand, there’s mid-game less management (e.g. sorting tiles by number), so it’s probably a wash.

I’ve played quite a few children’s games in recent years, and Dragomino is certainly in the upper echelon. There are still some light strategy decisions for the adults, and just enough for children to begin to process their own thoughts on strategy and probability. Meanwhile, the graphic design and theme are undeniably cute, and the game is competitively priced at $19.99. If you already know you like Kingdomino, then this is a great stepping stone for early Elementary School age children.

Dragomino manages to retain much of the spirit of Kingdomino while being entirely accessible to young children.