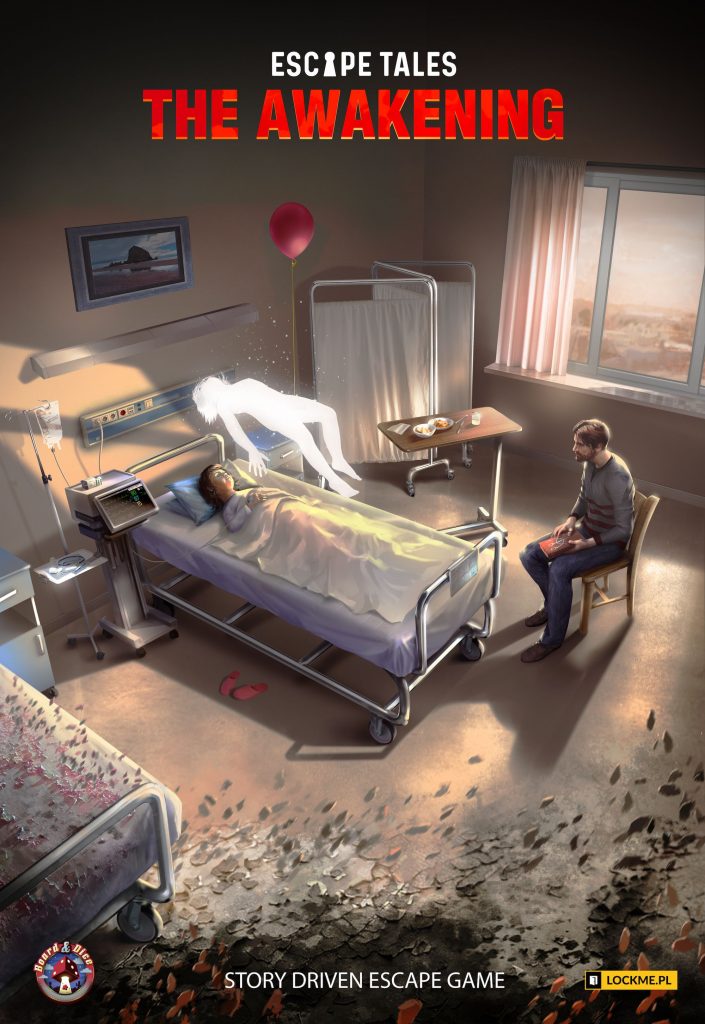 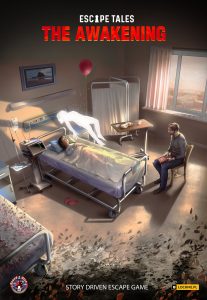 Escape Tales: The Awakening is a tabletop escape room game with an incredibly strong narrative. It follows a father whose daughter has mysteriously fallen comatose, and his quest to save her from her unexplainable condition before she slips away. With multiple possible endings, it offers replay value not always found in this type of game.

There are no two ways about it, this game is dark. It deals with macabre themes like occult rituals, lost souls, and suicide, just to name a few. The box recommends it for ages 16 and up, which seems right to me. This is absolutely not a game for children, and it is important that all players be aware of its potentially sensitive/triggering themes.

There are dozens of escape room games on the market, and for the most part, they tend to emphasize puzzles over narrative. Rarely do they make players feel any kind of personal attachment to the game-world, as if they were “really there.” Instead, players usually act as mere bystanders solving abstract puzzles that are loosely tied into a theme. Escape Tales: The Awakening breaks this mold by offering a highly thematic story that draws players into its world.

Now, as with any escape-room-style game, it’s important that I keep my review as spoiler-free as possible. As such, I will focus less on how the game is played and more on what the experience was like for me and how it made me feel.

As a brief overview of the game system before I give my overall impression, Escape Tales: The Awakening is app-assisted (well, technically, it’s a website, not an actual app), and it uses a book of story encounters and decks of cards that provide items, puzzles, map pieces, etc. The encounter book provides narrative text and instructions that guide players through the game/story. In order to illustrate how an encounter might look, I have shown the very first one below: 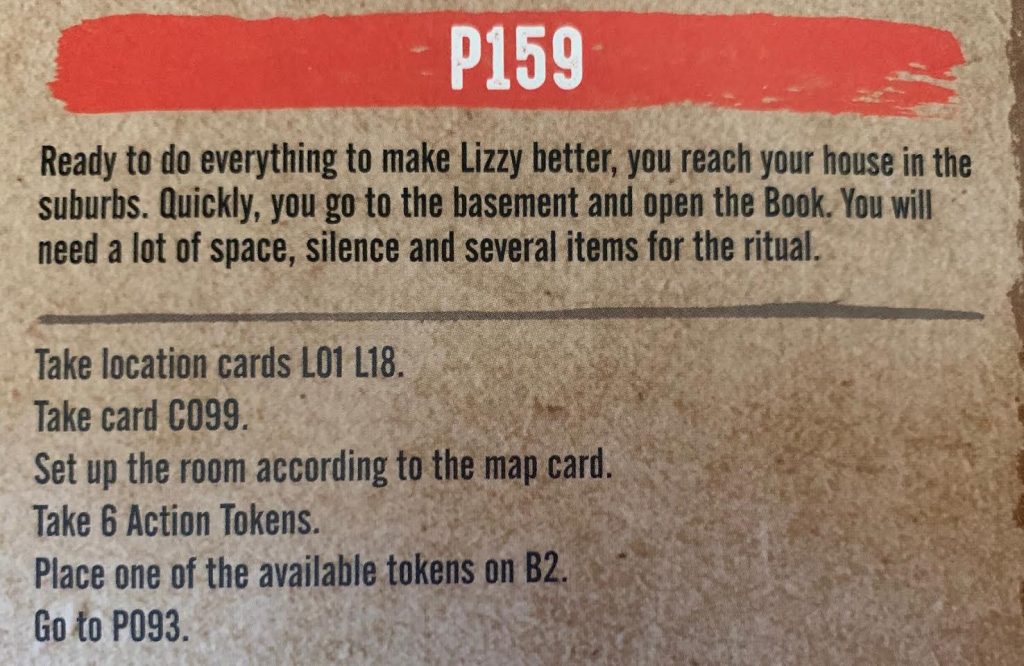 Based on the instructions given below the story text, players then fetch the appropriate components. Once again, I have provided an example below: 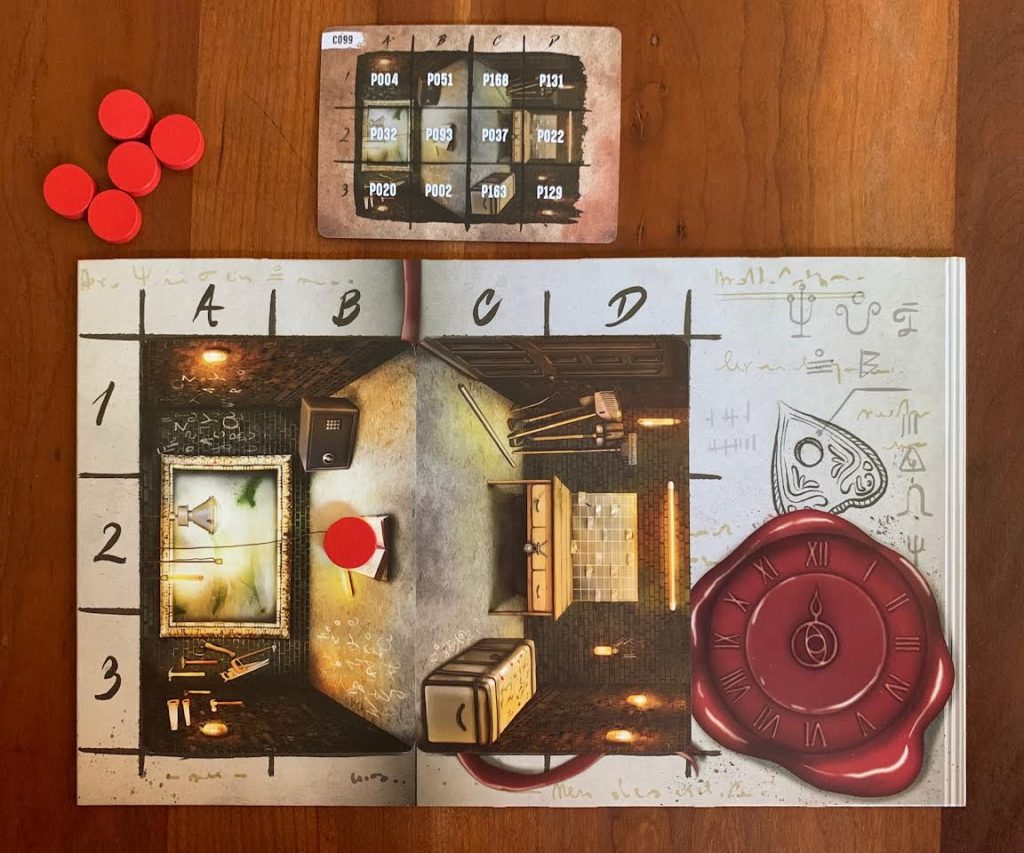 (To keep spoilers at a minimum, these are the only images I am using. The components shown above are also featured on the back of the game box, so I don’t consider them to be much of a spoiler.)

Like most tabletop escape rooms, players explore locations and uncover clues, but this game has a cool timer system that supports the exploration. A pool of action tokens dictates how much time players have to explore a location; if they run out of tokens, they cannot explore anymore… unless they draw a Doom card. Doom cards are bad (obviously), but they may provide players with extra, precious time.

The game offers several different endings, depending upon the choices made during play. This gives it multiple runthroughs’ worth of replay value, and considering that each runthrough could take upwards of four hours, players actually get a lot of bang for their buck.

Escape Tales: The Awakening was a tough pill for me to swallow. As the father of a young daughter myself, this game’s narrative was gut-wrenching for me on a personal level. I couldn’t help but feel the main character’s agony as he desperately fought to save his child’s life; after all, what loving parent wouldn’t move heaven and earth for their child? The unease I felt during the game sat with me long after I put it away, and it continues to linger even as I write this.

Now, I realize this may sound like a negative, but I’m not sure it is. If anything, the storyline of The Awakening was so engaging that it had a deep, emotional impact on me (something I can’t say that about many tabletop games). To use a comparison, it reminded me of watching a really sad movie; the viewer connects with the characters, and the characters’ pain becomes their pain. Even though the theme is difficult, the game is really thematic, and I applaud the designers for that.

Escape Tales: The Awakening is by far the lengthiest escape room game I have played, so it’s good that it includes a “save” feature. The rulebook features a page where players can record their current game-state, in order to pick it up easily at a later date. To be honest, I suggest splitting the game into multiple sessions; trying to play it all in one night would just be exhausting emotionally.

The game experience could most easily be compared, I would argue, to T.I.M.E Stories, but Escape Tales is certainly its own, unique entity. Its components are minimal – mostly just cards and a couple of tokens – but they are good quality nonetheless. The art looks nice, the token system is helpful in keeping track of where players have been, and the encounter system is straightforward and intuitive.

I’m not sure how to make a final recommendation for this game. The experience is gripping, but players need to understand what they are getting into before they begin. Escape Tales: The Awakening is a great choice for players who, like me, crave games with rich narratives. Due to the difficult themes involved in this game, however, I don’t recommend it for everyone. Instead, I suggest it for players who like strong stories and escape-room-style exploration, but don’t mind tackling more adult themes in the process. If that sounds like your style of game, definitely check this one out!

With a strong storyline that is not afraid to explore tough themes, Escape Tales: The Awakening is a bold gaming experience. Not for everyone, but good for those who like rich narrative and don't mind darker tones.