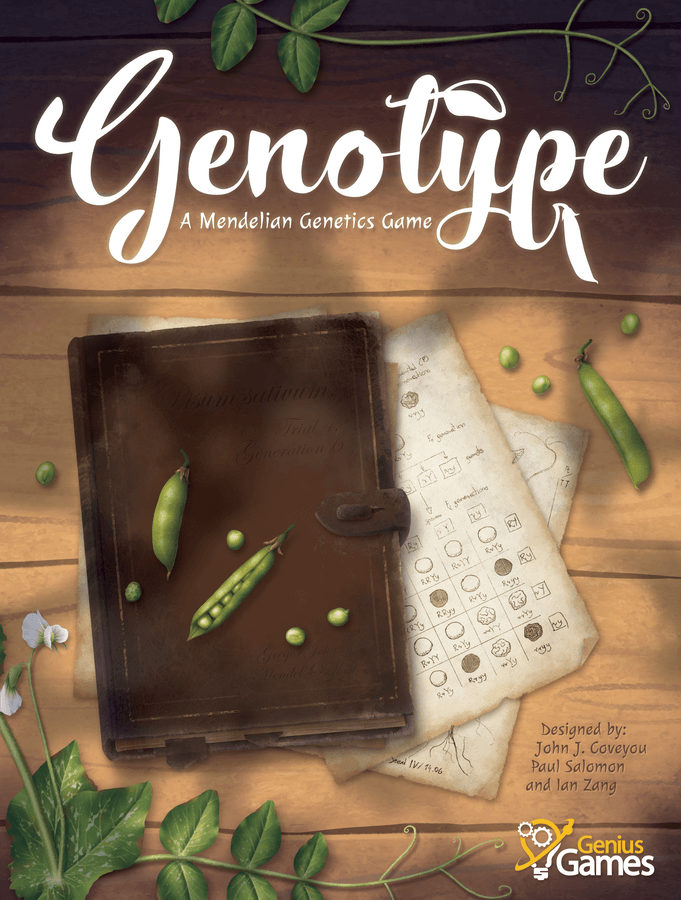 Genotype: A Mendelian Genetics Game is a new release from Genius Games, who specializes in strategy games with strong science themes. Set in the monastery where Gregor Mendel conducted his famous pea plant studies, players take on the roles of scientists studying the plants’ genetic traits and the effects of crossbreeding.

As the curator of a science museum, Genotype really interested me when I first heard about it. Science history is rich and fascinating, and I was delighted to see in being explored in the realm of board games.

Genotype is a worker placement game in which players take turns executing actions, breeding plants, and researching their findings. The goal of the game is to earn the most points. 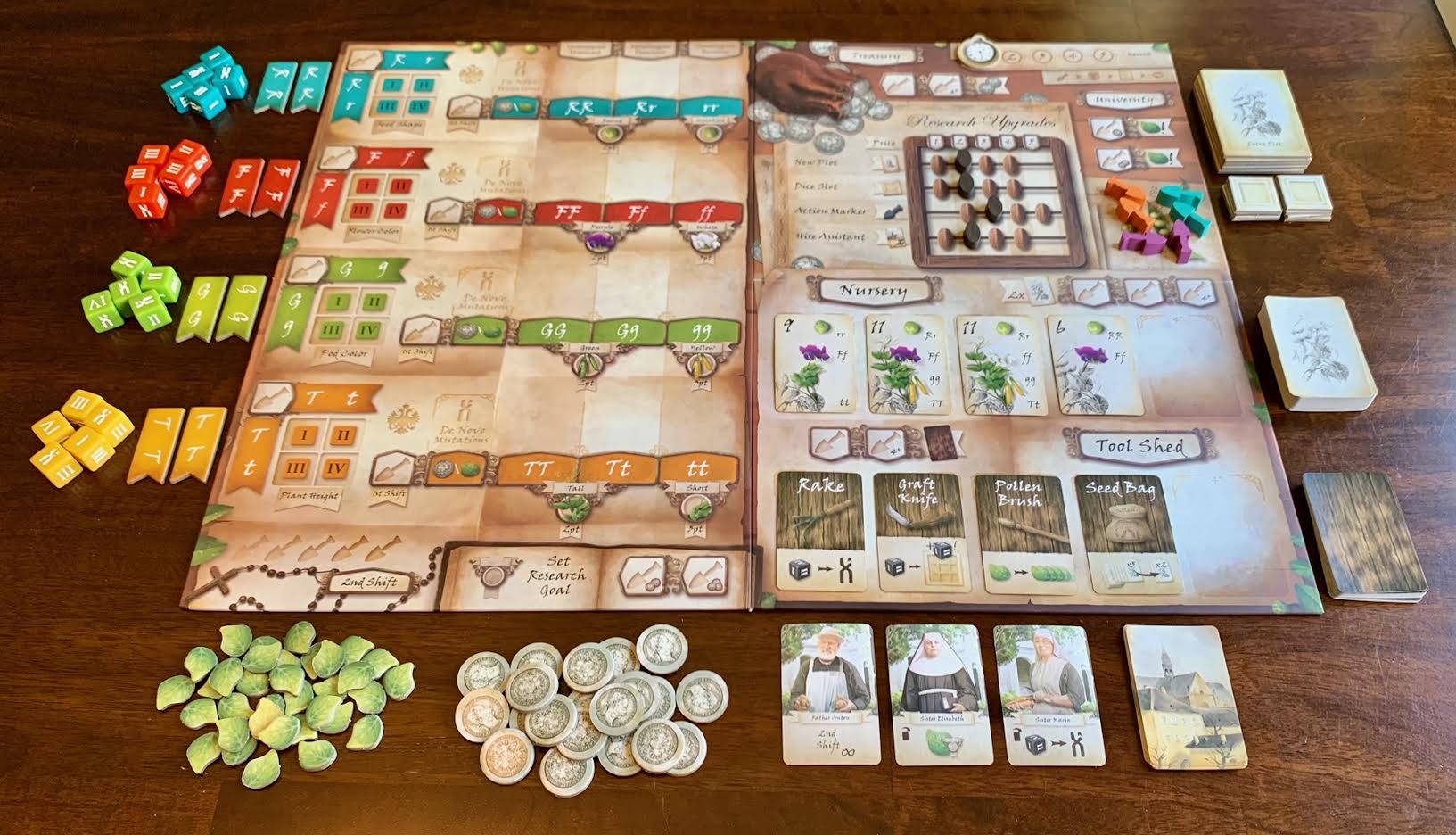 The game is played on a central board, which features Punnett squares, an abacus for tracking the prices of upgrades, a card display, and an area for dice. Each player also keeps an individual tableau. 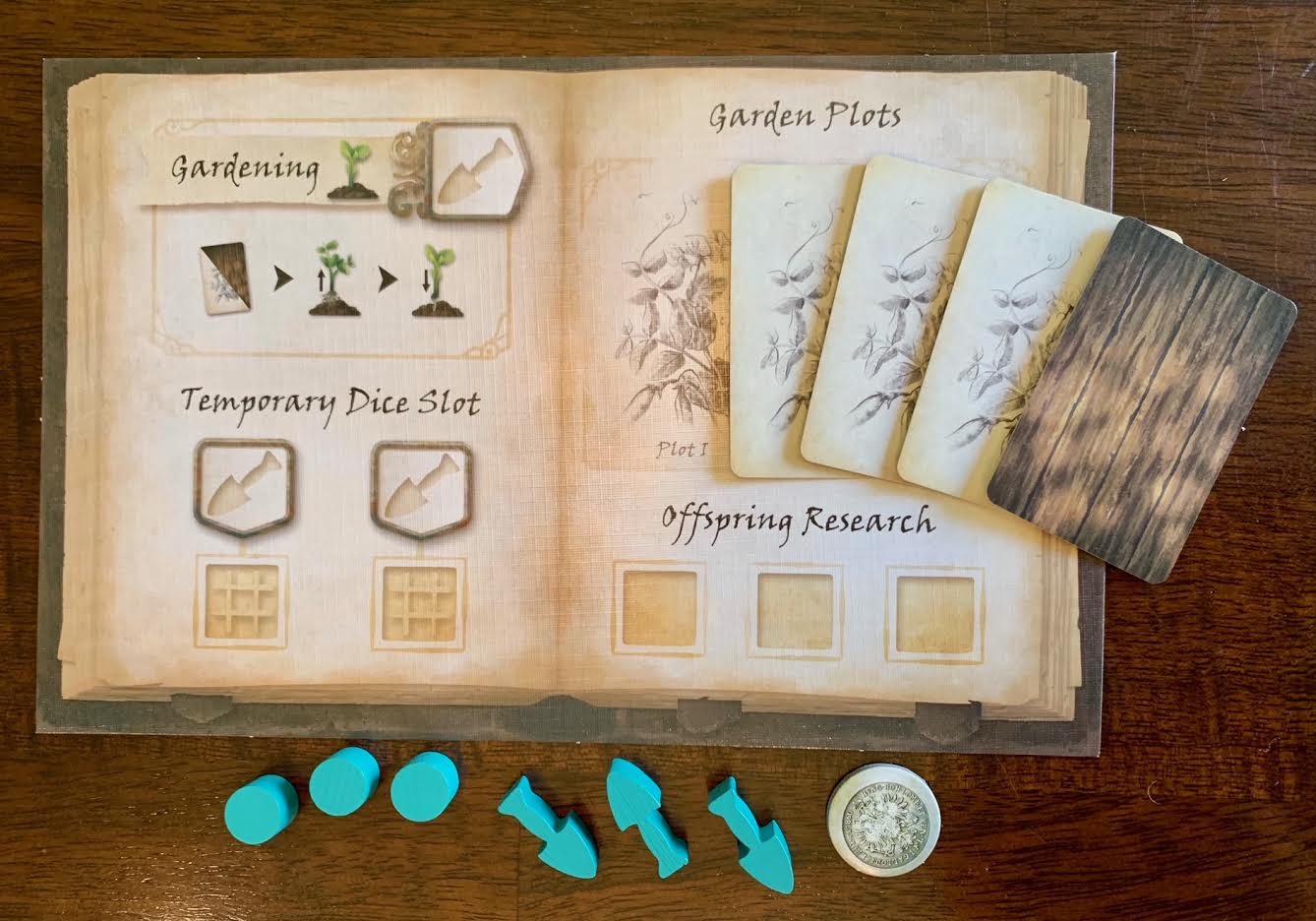 The game takes place over 5 rounds. Each round is divided into 3 phases:

There are several actions players may take with their workers, both on the central board and on their own tableaus. These include: 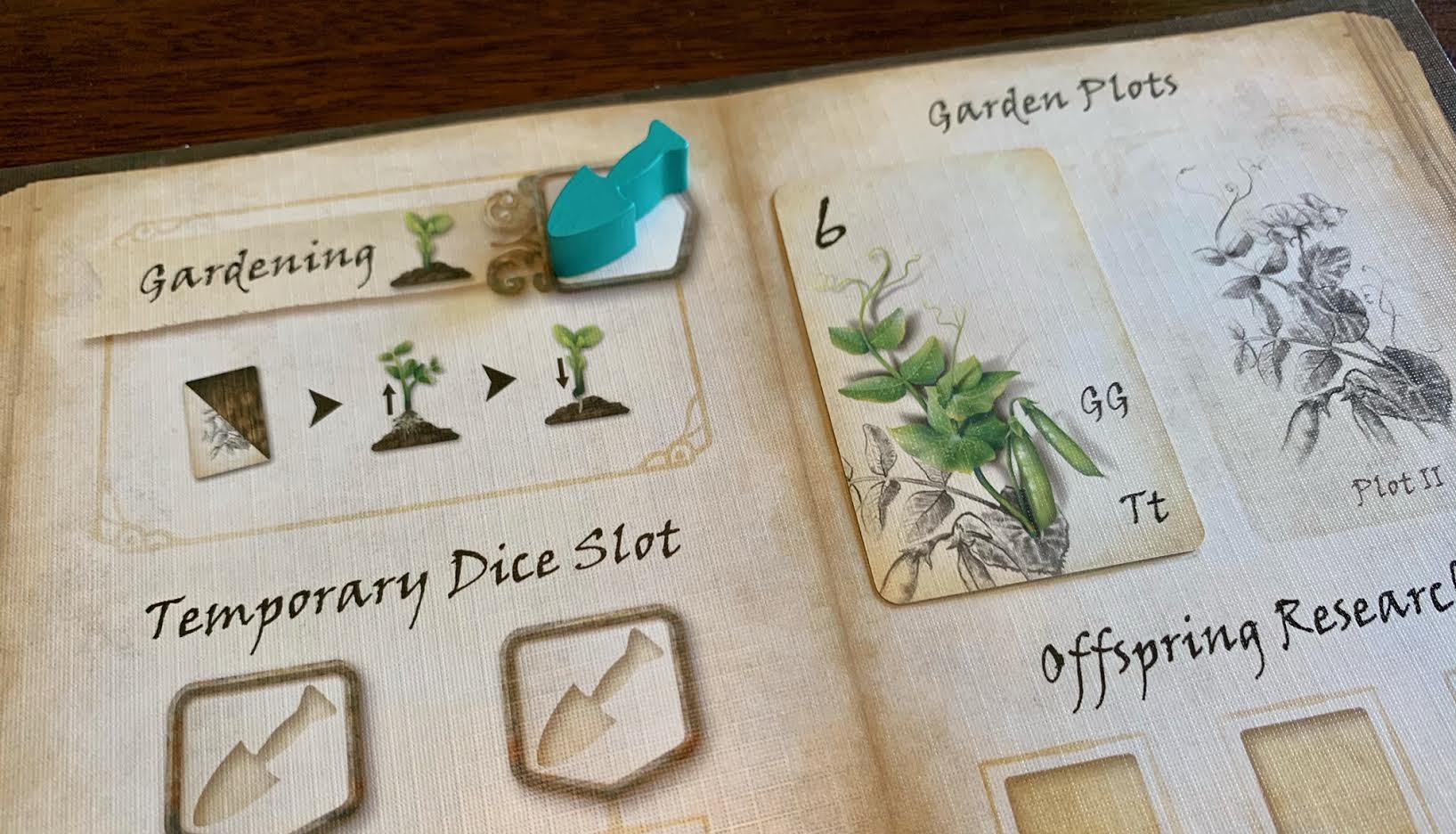 This player took the gardening action, which allowed them to place a pea plant card. Once both of the card’s traits (GG and Tt) have been validated, it will be worth 6 points.

The crux of the game is, of course, about studying pea plants. Plant cards have a number of traits on them, each represented by a genotypic pair of letters (e.g. Ff, gg, TT, etc.). These correspond to the Punnett squares on the main board. 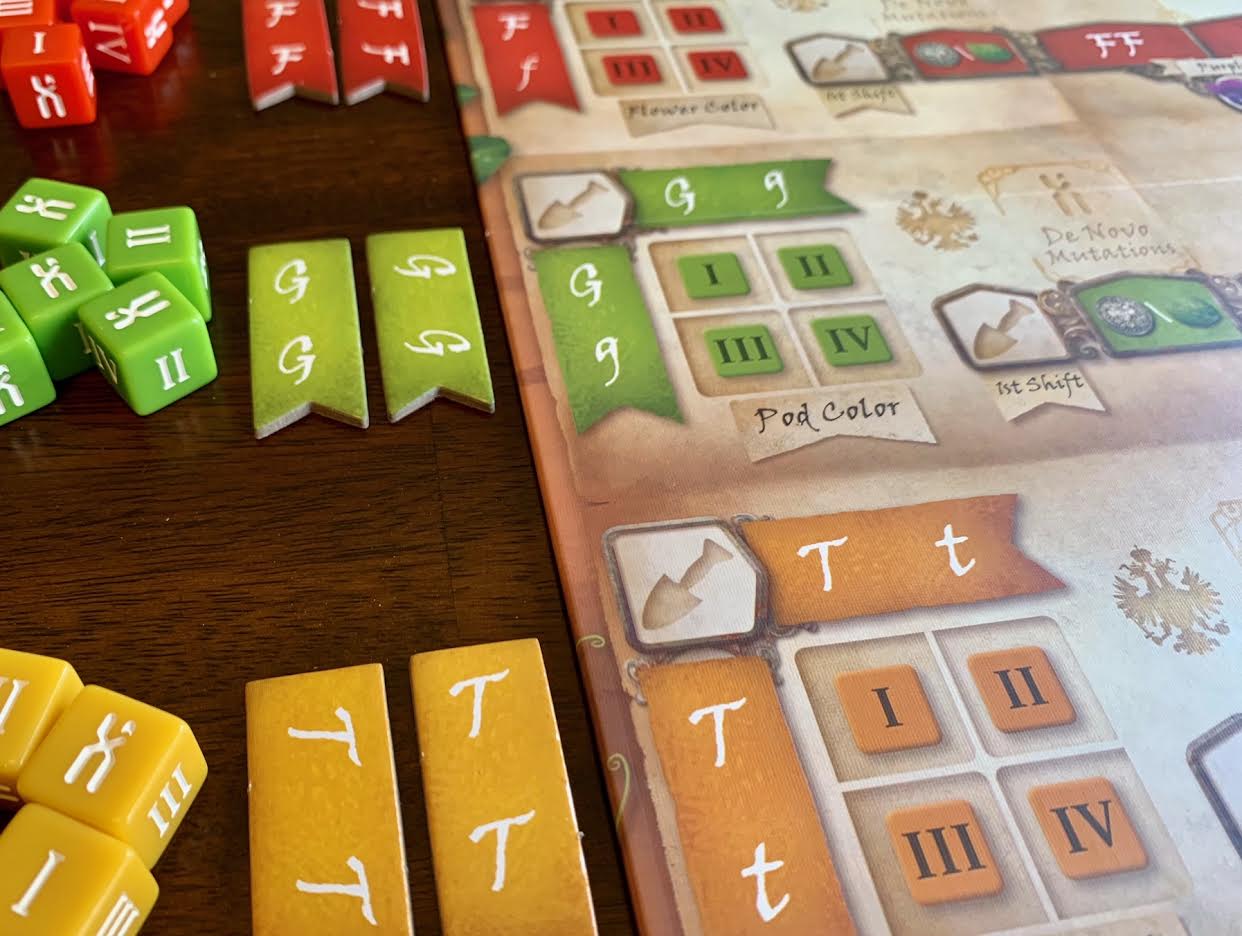 Each round, after all workers have been placed, players can validate genetic traits during the plant breeding phase. To do this, they roll all 20 offspring dice (the dice are lovely, by the way), and sort them based on their results. 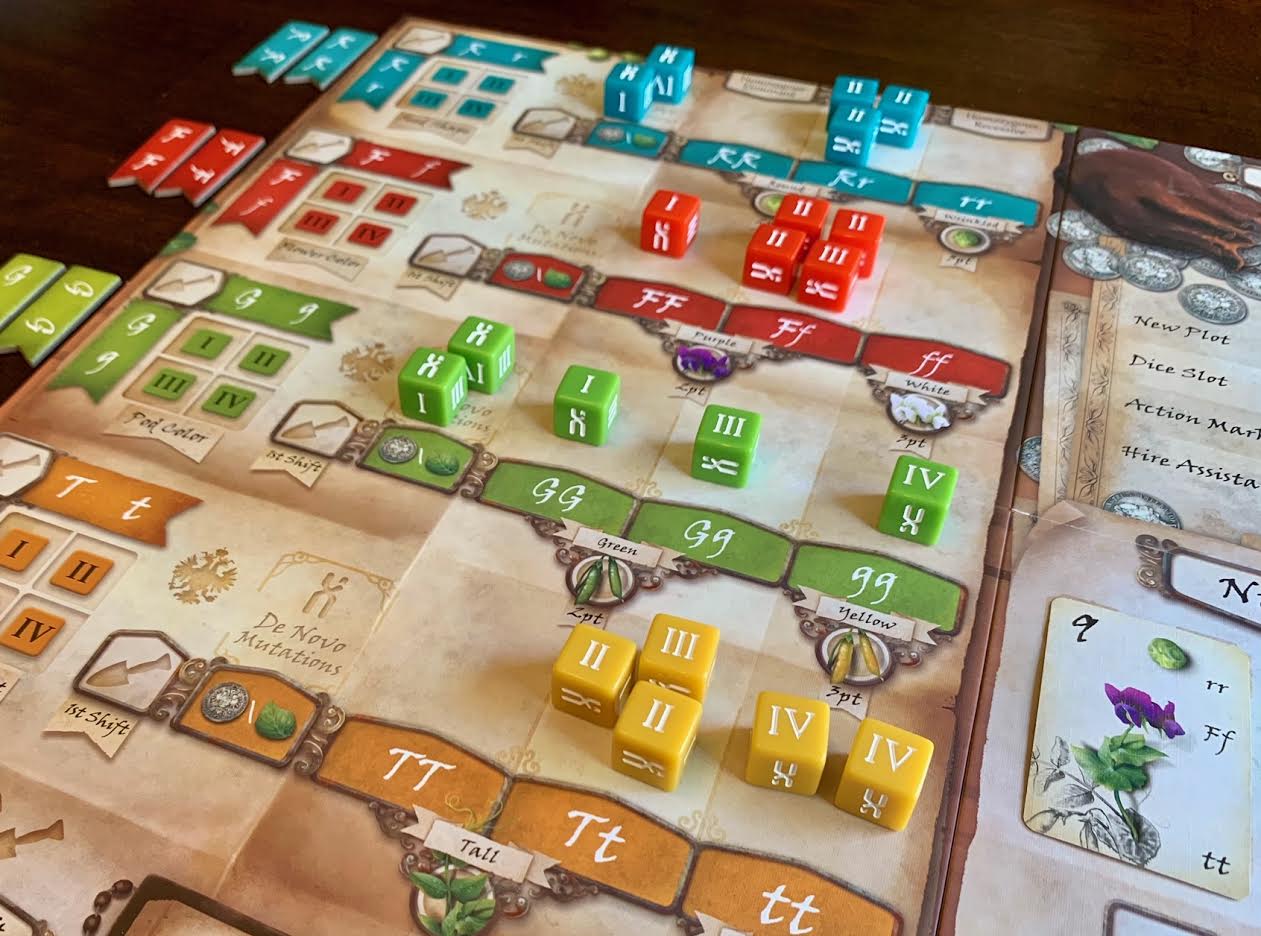 Players then take turns drafting dice from the pool. Whatever die a player drafts, they validate (i.e. cover up) a matching trait on a plant card. When all the traits on a card have been validated, the card can be harvested and set aside to be scored at game end. 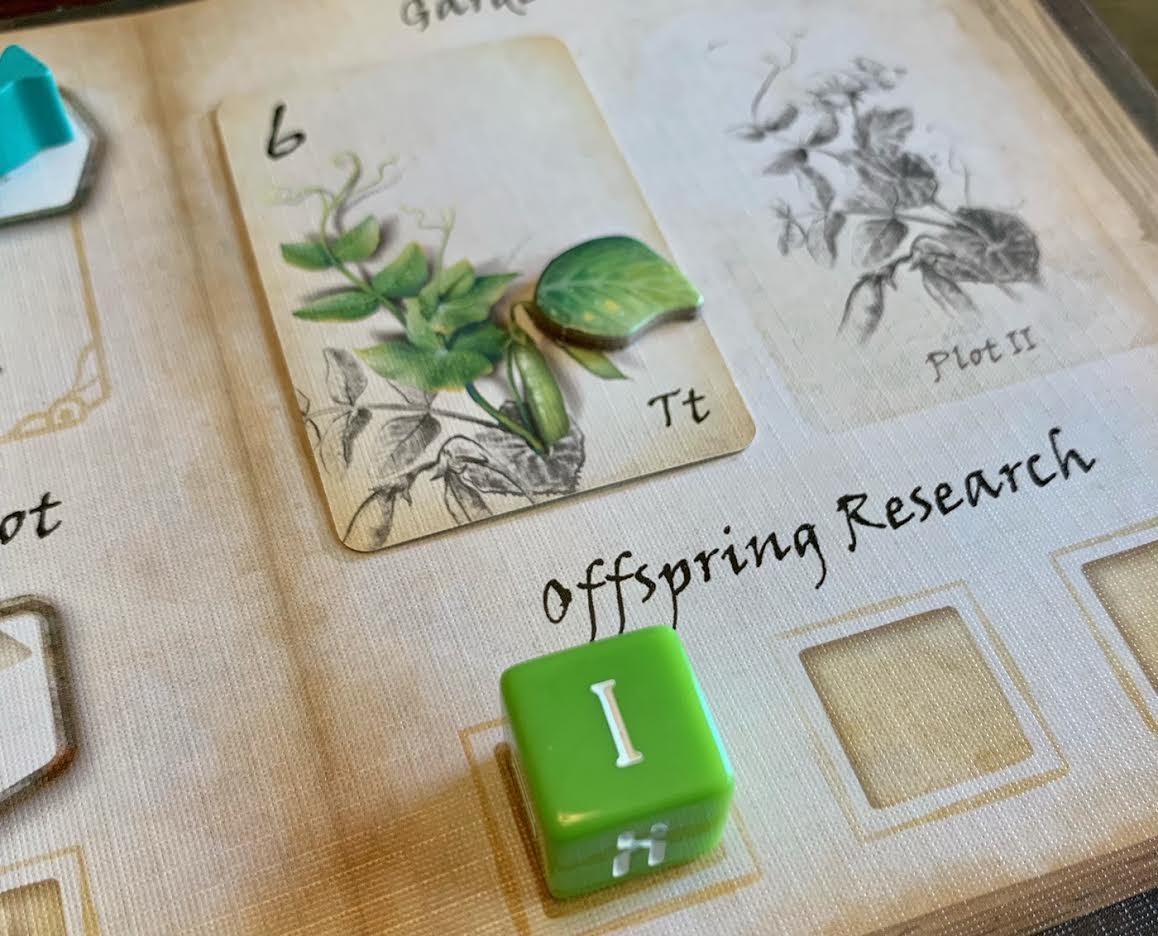 By drafting a green “I” die, the player is able to validate the GG trait on their pea plant card.

Players are limited in the number of dice they can draft – in order to claim a die, a player must have an available dice slot in their tableau. Actions are also available that can modify the draft order, allowing a player to pick a die earlier than normal. Additional dice slots can also be earned, which allow players to validate more traits per round.

Once they have finished drafting dice, players move onto the research upgrade phase. Here, they can purchase helpful upgrades and abilities like extra workers, extra spaces for pea plants, extra dice slots, or assistants. 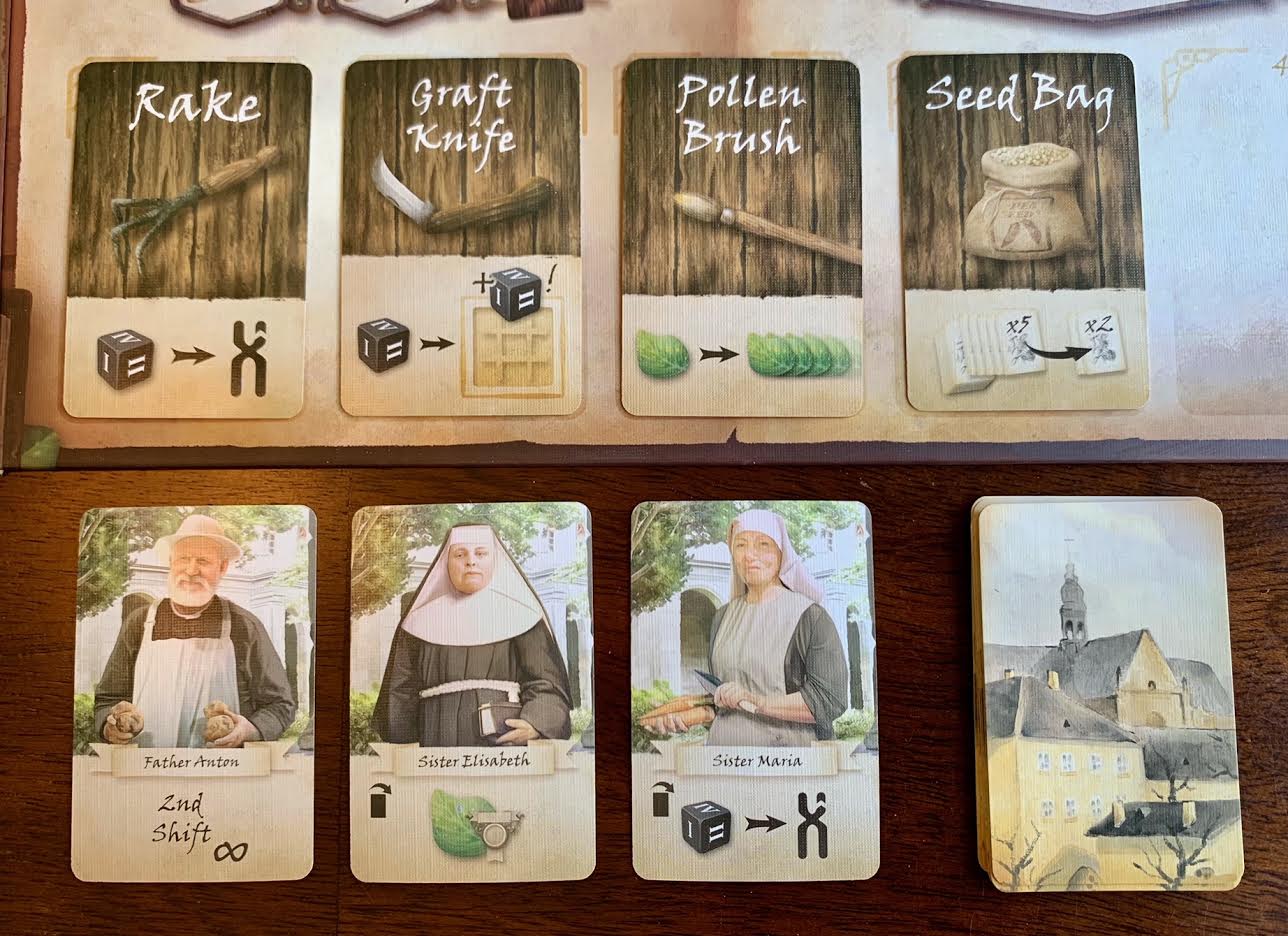 Play continues in this manner for 5 rounds, after which the game ends. Players then total their points, which come from completed pea plant cards, phenotype research goals, incomplete pea plant cards (1 point per validated trait), and remaining coins. The player with the highest score wins!

Once again, Genius Games has managed to craft a product that is fun, strategic, and educational. Just as Cytosis gamifies real-life biology concepts, Genotype gamifies concepts of genetics. This game provides a great abstraction of the way cross-breeding works, even allowing players to modify Punnett squares to change the outcomes. (Doing so also helps to mitigate the dice luck.) The real-science theme is bolstered by the robust gameplay underneath, resulting in an all-around engaging experience.

Production-wise, Genotype looks great, even better (in my opinion) than Cytosis. The cover art is striking, the dice have a pleasing tactile quality, and the game includes a supplemental booklet about the science behind the game. All told, Genotype is a high-quality product that looks and plays well. 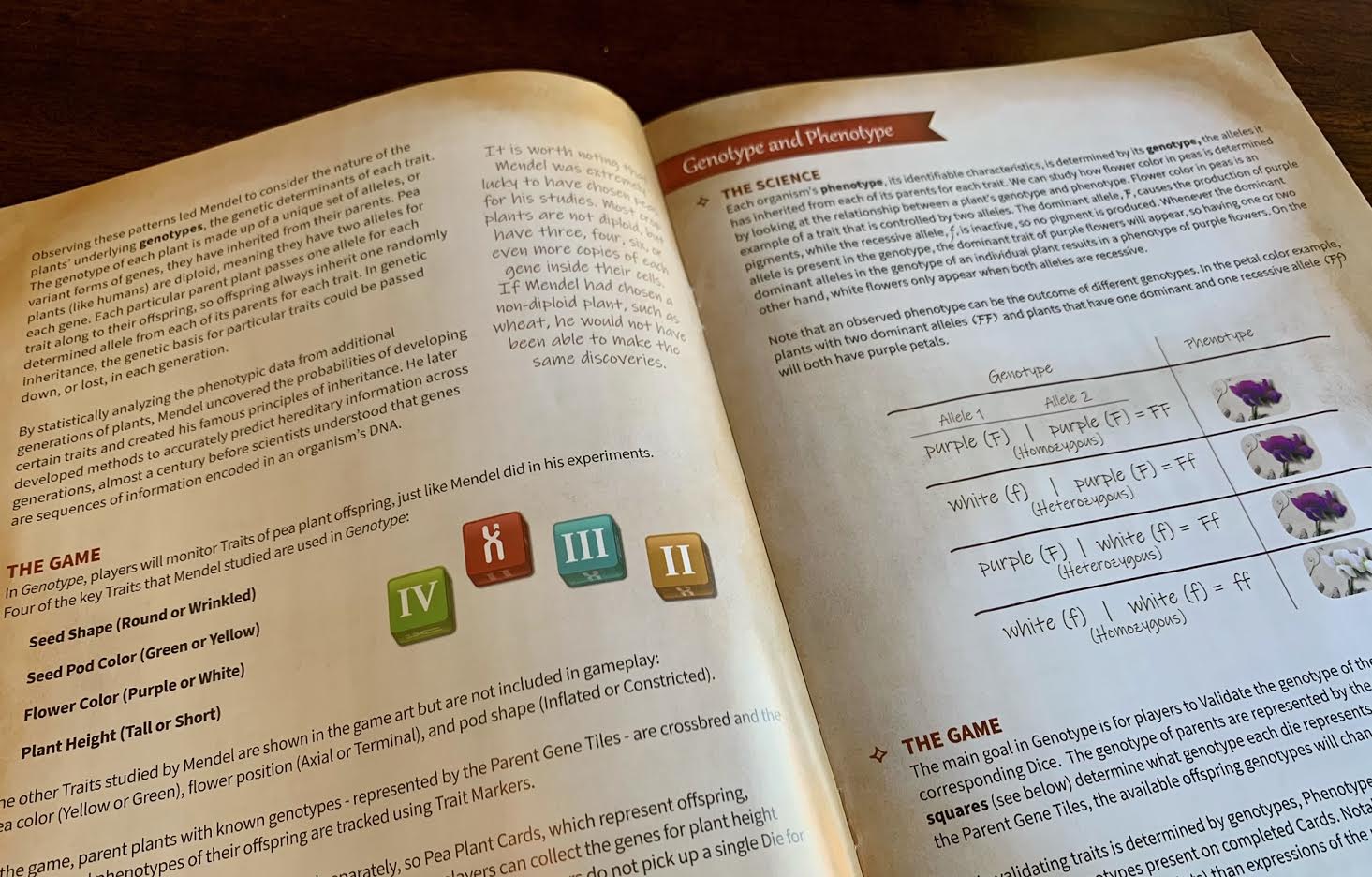 Before reviewing Genotype and Cytosis, I had had very little exposure to Genius Games as a publisher. These games both impressed me enough that they put Genius on my “publishers to watch” list. Genotype: A Mendelian Genetics Game is another strong strategy game that educates players about complex scientific principles. It is definitely worth checking out.

A review copy was provided by Genius Games.

Genotype: A Mendelian Genetics Game is another strong strategy game that educates players about complex scientific principles. It is definitely worth checking out.