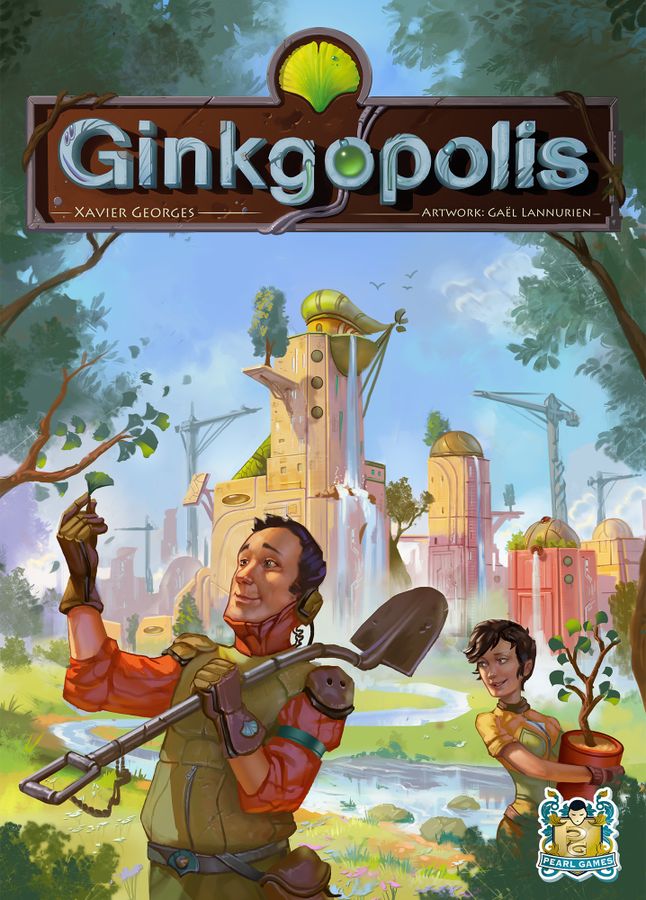 Ginkopolis is a euro-style game of building a futuristic eco-city. With an unusual twist on action selection, this game feels very different than most euros – and most other games in general. How does it work? Read on!

After spending years out of print, the highly-regarded Ginkgopolis is returning to store shelves. In this game, 1-5 players work to earn points by expanding a grid of tiles representing city buildings. Each turn, players select actions to execute; actions always require the playing of a card, and may also involve the playing of a tile.

The central tableau begins as a 3×3 grid of building tiles, numbered 1-3. Around this grid, circular letter tiles mark spaces where additional buildings can be placed. 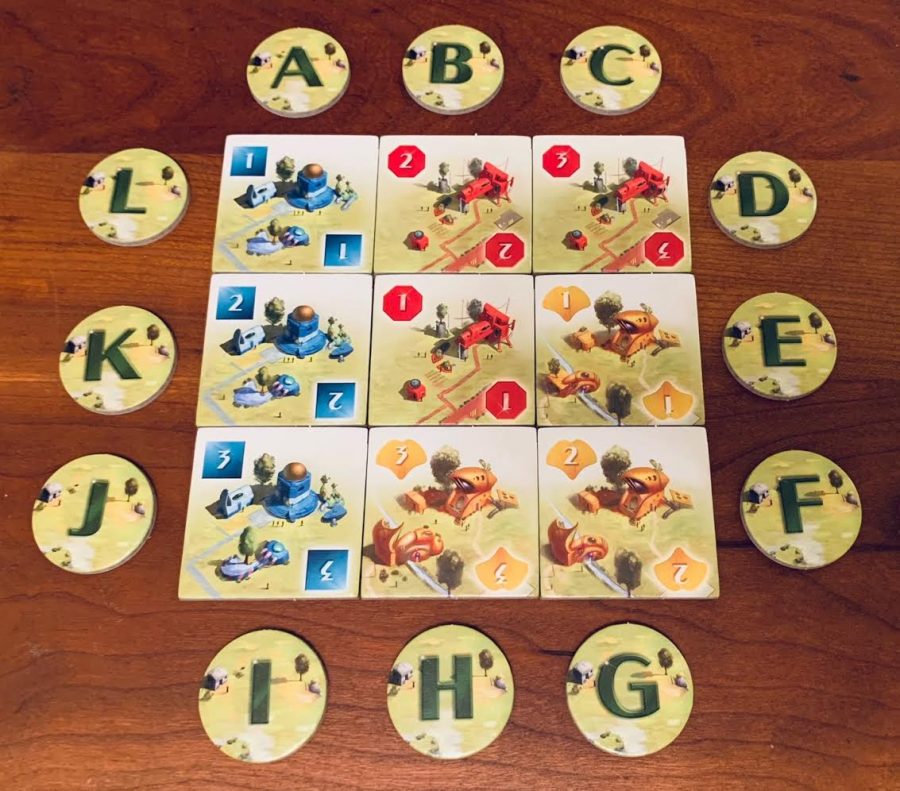 Building tiles come in 3 colors, each numbered 1-20. Red buildings give players additional resources, yellow buildings award points, and blue buildings let players draw more tiles. Throughout the game, players will collect resources and tiles, which they can use to expand the board and claim spaces on it. 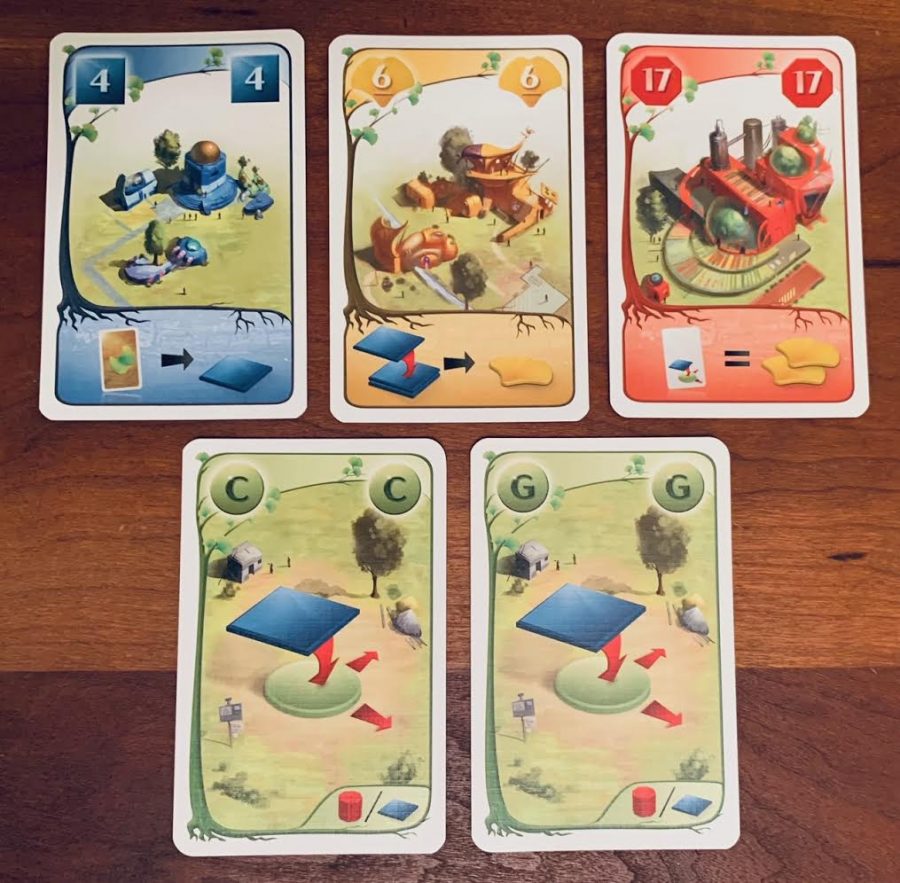 The actions players can take are: 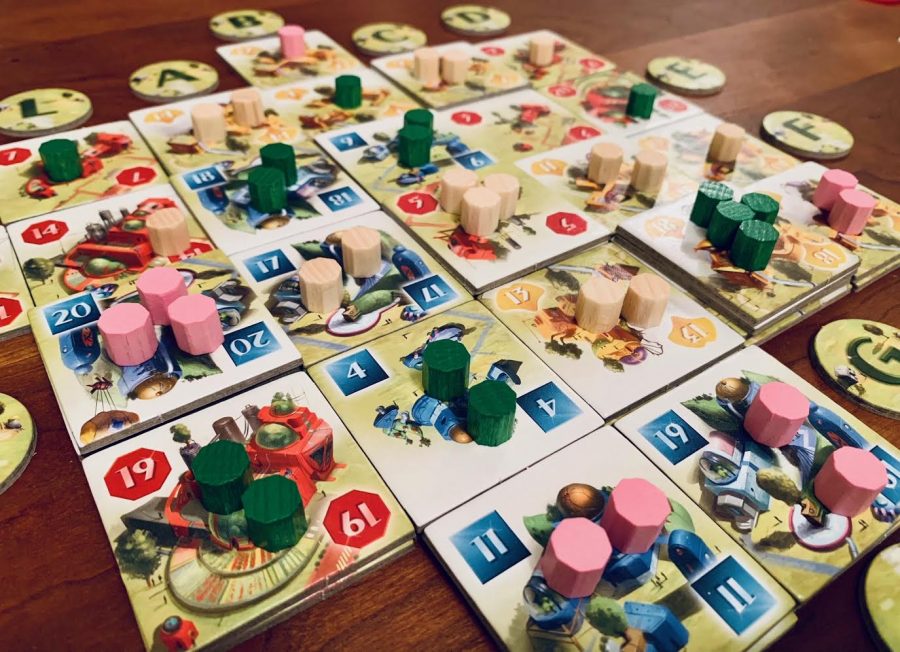 By the end of the game, the grid will look something like this.

In the case of the first 3 actions, the played card is discarded after use. When using the last action, however, the player keeps the card, adding it to their personal tableau. Cards in a player’s possession provide bonuses, either gameplay advantages or endgame points. For instance, a card might grant a free resource any time the player adds a building, or a free tile anytime they play a card by itself. In this way, Ginkgopolis has a slight engine-building flavor.

Play continues like this, with players choosing and executing actions, until either the tile supply is exhausted or until all of a player’s resources are on the board. When either of these things happens, the game ends and points are tallied. Points come from several sources, including cards and area majorities on the board. The player with the most points wins!

Ginkgopolis is one of the weirdest games I have ever played. Despite its rules being only about 5 pages long (including setup) it feels heavy, complex, and strategic. It uses tried-and-true mechanisms like action selection, tile placement, and area majority, but combines them in a way I have never seen before. This is both a positive and negative.

On the one hand, Ginkopolis feels totally unique; there is simply nothing else like it. A far cry from “just another soulless euro,” even experienced strategy gamers will be surprised at how inexplicably different it feels. On the other hand, for this very reason, it can be a bear to teach and understand. Its uniqueness means that nothing about it is intuitive, and players may find themselves stumbling through 30 minutes of gameplay before they even understand what is going on.

However, this is not to say that I dislike Ginkgopolis. On the contrary, I actually found it to be quite engaging and interesting. I just don’t recommend it for new gamers. In order for this game to go over well, it’s important that all players have experience with strategy games and that they all understand that this one has a learning curve.

With this in mind, if you are a fan of euro-style games and want something that feels totally fresh, I suggest checking out Ginkgopolis.

Ginkgopolis blends tried-and-true mechanisms together to create an experience like no other. Its uniqueness is a double-edged sword, but it is a good choice for seasoned gamers looking for a totally-fresh experience.