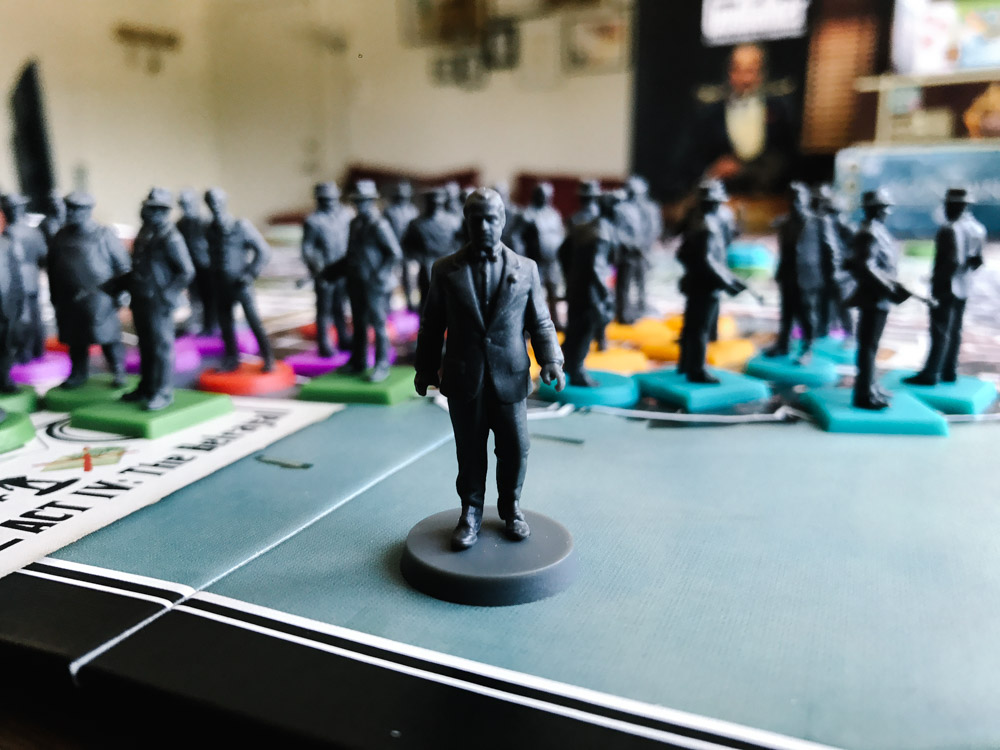 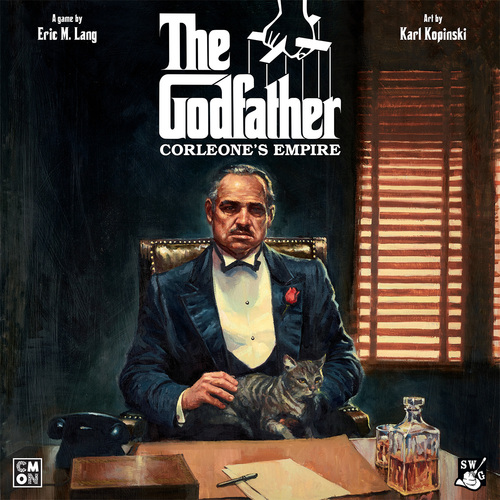 The Godfather: Corleone’s Empire was designed by Eric Lang. Lang is responsible for many popular board games including: Chaos in the Old World, Blood Rage, Arcadia Quest, Bloodborne, and many more. Lang is a full-time director of game design at CMON Limited.

CMON, once Cool Mini or Not, began as a simple website for users to submit various self-painted miniatures for others to rank. In 2011, Cool Mini jumped into board game publishing, releasing Super Dungeon Explorer and Zombiecide in 2012. CMON Limited has published a substantial and well-received list of games, including: Blood Rage, The Grizzled, Ethnos, Potion Explosion, Unfair, and many more, including the upcoming Rising Sun. 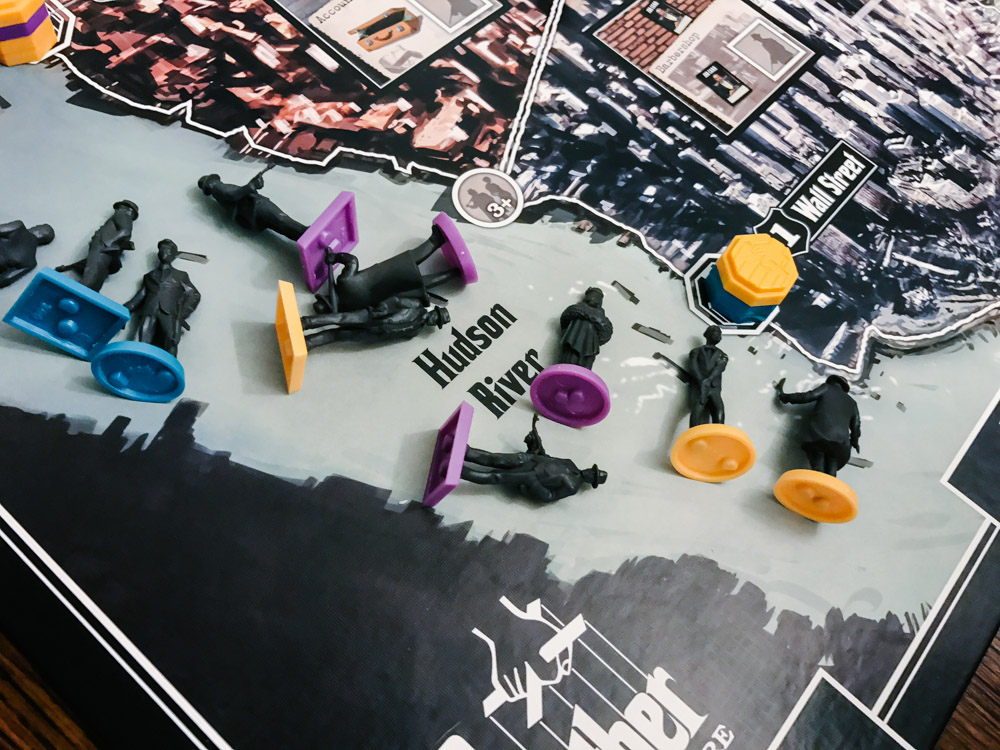 In The Godfather: Corleone’s Empire, players are acting members of mafioso families. Players collect alcohol, drugs, blood money, and guns to carry out meticulous and vicious assaults on other gangs in the city. Players will hide money from Don Corleone and will commit bribery, theft, murder, assault, shakedowns of local businesses, and more.

In short: this game emulates a highly-stylized lifestyle of gangsters bent on city-wide domination at the cost of precious life. For those already familiar with The Godfather film series, expect more of the same, however this violence is less graphic and visceral, and more inferred. You won’t see graphic, bloody artwork, though plastic miniatures will be tossed to their side in the Hudson River.

Those uncomfortable with the theme implicitly expressed through mechanics might consider a different game. In addition, some might also be uncomfortable with the high level of player interactivity. Most turns are spent harming and trying to gain advantage over other players. Conflict is high, and well-prepared players who love direct confrontation and area control will feel right at home here. 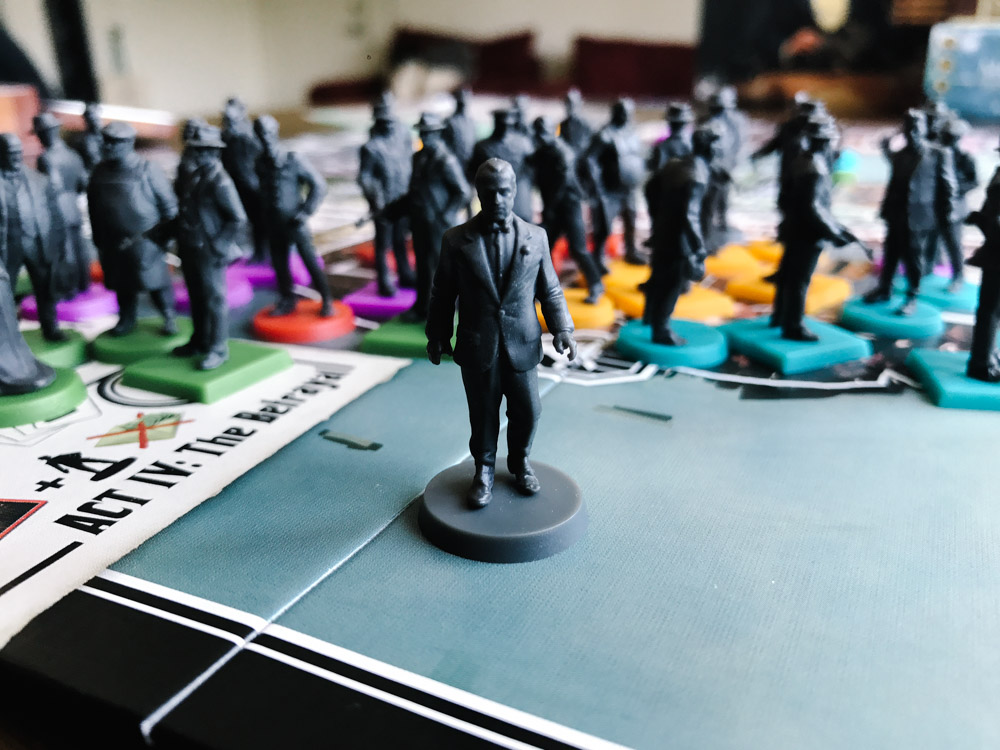 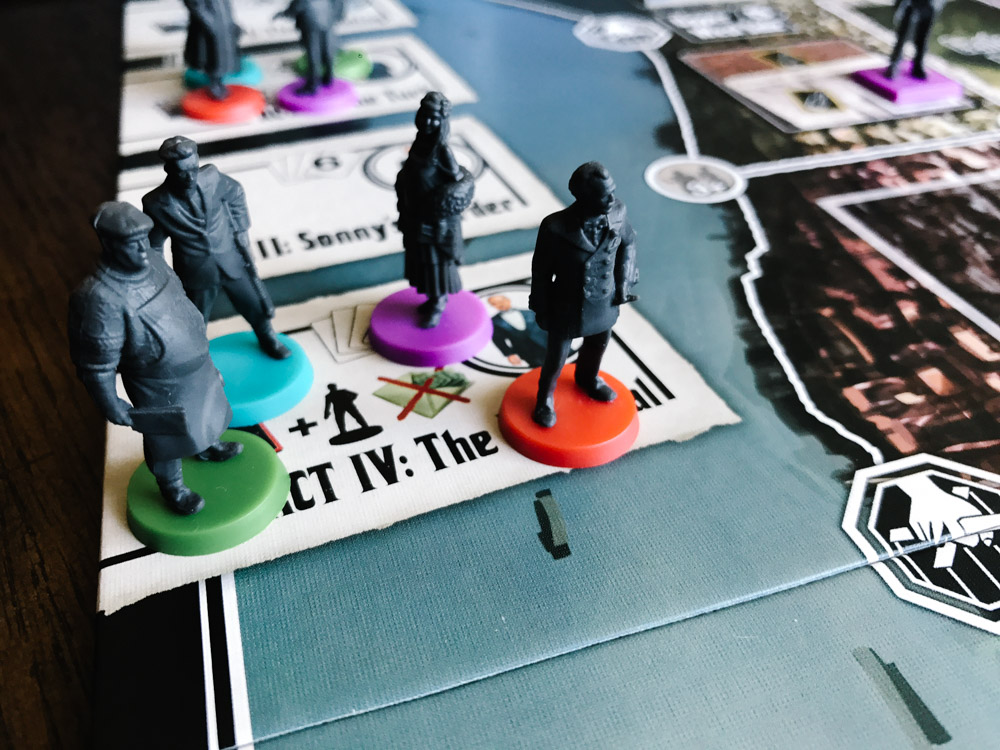 A few of the family members, unlockable as the game progresses.

The Godfather: Corleone’s Empire is one of CMON’s latest games and also arguably their largest IP-based title released to this point. From the mind of Eric Lang, The Godfather channels both immediate payoff via worker placement with conniving and brutal area control mechanisms.

Not actually taking roles of main characters from the film, players instead move and plot as the head of one of five mafia families in New York. Each family is equipped with two types of workers: thugs, and family members.

While both are placed into various areas of New York boroughs, each worker creates options for the player. Thugs go into the fronts of businesses which grants an action sometimes suitcasing money, other times taking resources. Family members provide more sustenance, however. These are placed adjacent to multiple boroughs and relinquish actions by shaking down the backs of all businesses in the areas adjacent to them. In this world, those of prominence indeed take priority. 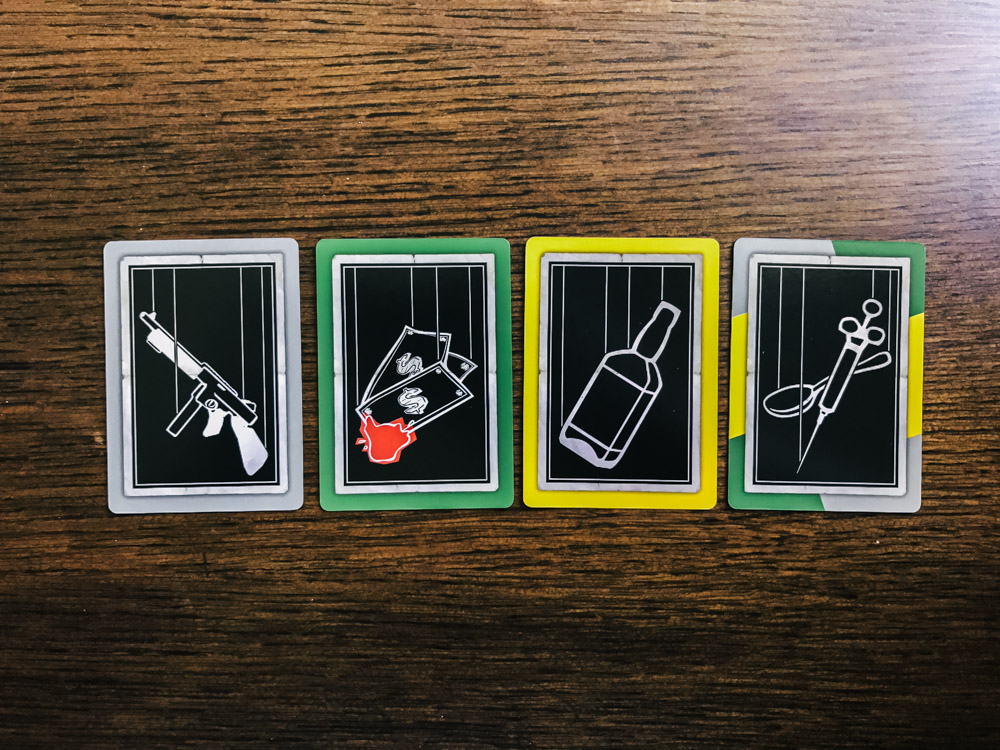 Guns, blood money, alcohol, and narcotics. These are the fuel for city-wide violence and takeover.

Players can spend hard-earned resources to complete jobs in hand, or in more dastardly fashion, one of the available jobs on the board. These nasty cards are the main means by which destruction takes place throughout New York. Some cards detonate a car bomb, killing all enemy figures in an area, while others allow a player to take three cash cards from an opponent’s suitcase. Jobs are critical to the flow of life for family members, and must be planned and executed with wise pacing. These only replenish at the end of rounds, so wise players will snag public jobs before others can.

The Godfather doesn’t leave players with solely worker placement, but instead interweaves other mechanisms to further complicate the gangster paradise. Players unlock additional family members as the game continues, alongside additional businesses of varying strength. The board grows, as do options for players.

Players must suitcase cash because hand sizes are downsized at the end of each round, paying tribute to Don Corleone, of course. The suitcased money is not only needed to achieve victory, but players also will spend it to bribe an ally each round to join their forces. Depending on how long a game has progressed, allies become far more abrasive as time goes on. The corrupt police officer starts off simply moving thugs out of areas, and by the third round will massacre all enemy figures in an area, sending them to the Hudson. 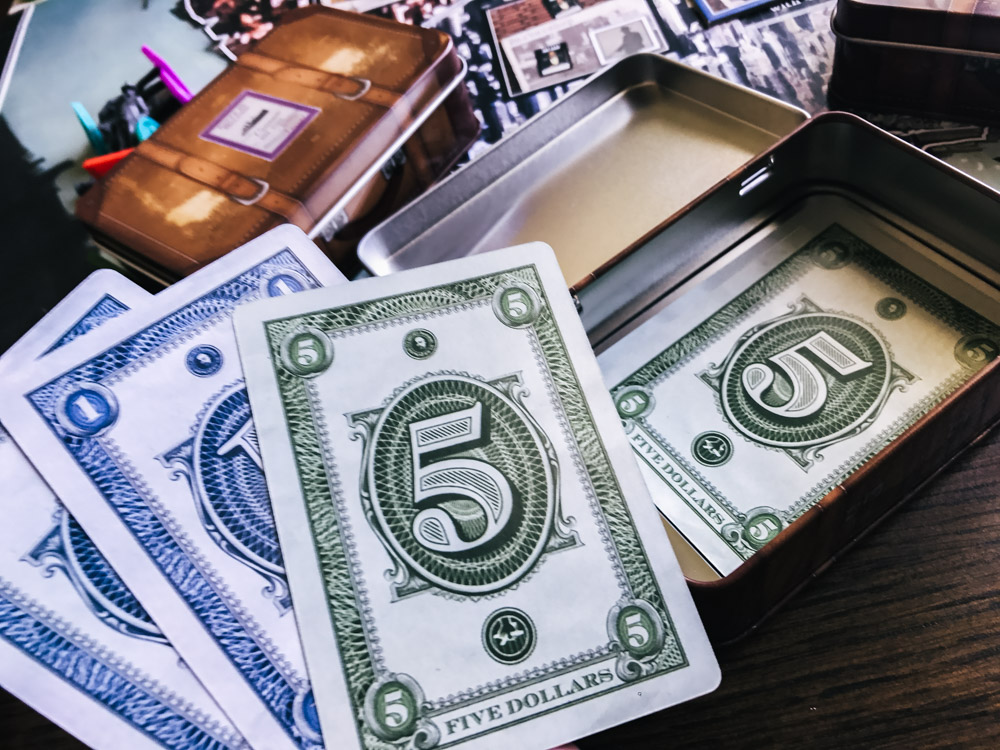 Money goes in the suitcase. Don’t ask, just figure out how to get it there.

Not only will the winning player look to suitcase as much money as possible, but all must be aware of which parts of town they control. Each round, players count up their figures in New York and place a control marker wherever they maintain majority control. At the end of the game, the player with the most tokens in each area gains an additional $5, which adds up. In addition, players tally their jobs of each of the four colors. The players who completed the most job types score more cash as well.

The richest gangster wins. Is this money to front operations against the Corleone family? Is it for bragging rights as the most efficient family in the city? Ultimately, aside from the names of each act, or round, the events of Corleone’s Empire don’t interact much with the film. One might notice a few familiar faces or events on cards that seem similar, but the two are disconnected. This isn’t to the demise of Corleone’s Empire, but instead to showcase the disparity between the two. This approach recognizes the ebb and flow of Puzo and Coppolla’s 1940s crime-filled and undulating New York underbelly, epitomizing the everyday of a mafia-type all in card play and majority control. 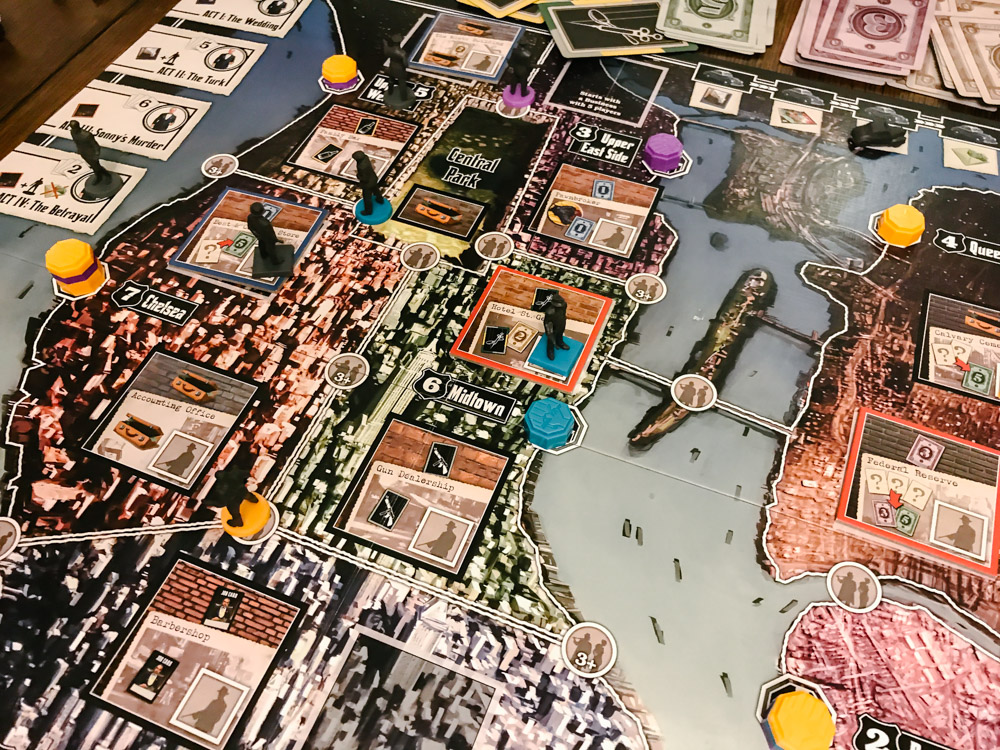 Beautiful works of art on the board. The illustration of New York city is excellent.

Presentation-wise, Corleone’s Empire swings a few times, hitting hard but also missing. Laying out the board reveals an intricate topographical layout of 1940s New York. Cards will lay off the side and have denotations for each card type. Building locations are plentiful and revealing them each turn shows off how increasingly variable the game is. Miniatures gathered by each player have a wisely vibrant-colored base to differentiate gangsters, which otherwise would make for a mess. Where tins make a horrible box to house a board game, simply acting as a vessel to store a player’s cash is brilliant and satisfyingly tactile.

Likely oft-discussed, card art is supremely lacking. Look at any IP title from Upper Deck’s Legendary series, or even artwork from any of Fantasy Flight Games Star Wars IPs (Imperial Assault, Rebellion). Each of those series of games take full advantage of the plethora of available artwork to both photo-realistically replicate, but also to illustrate. Here, resource cards are rather minimal and dated. Each job card showcases the darkened figure of Vito Corleone, again with those irregular-looking resource symbols. 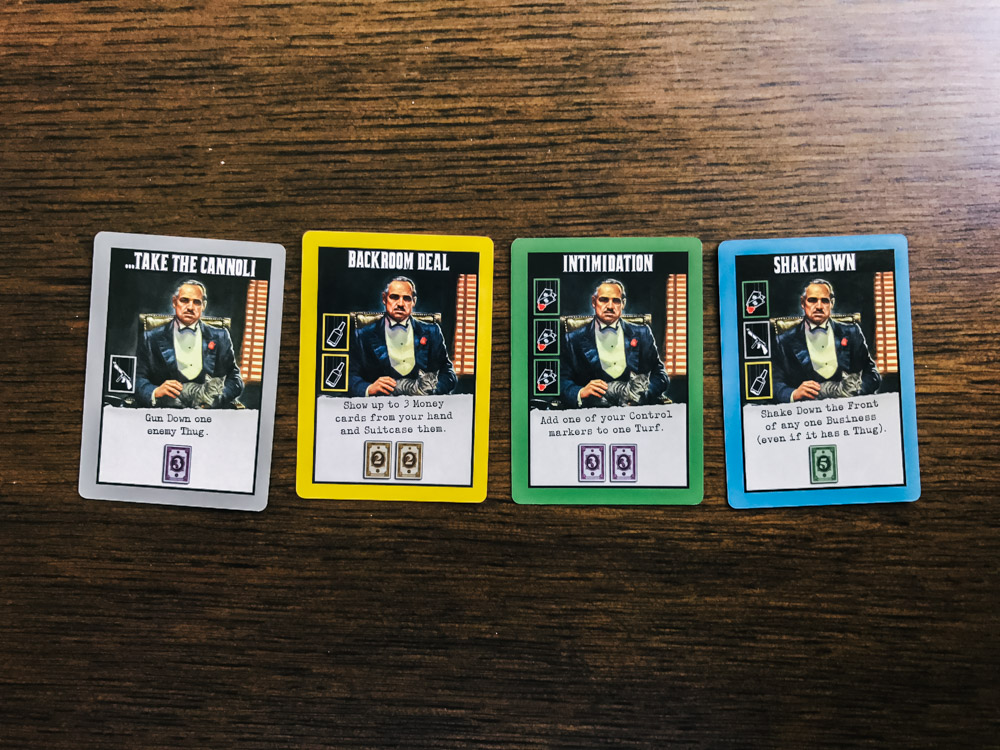 We know the opportunity is missed because both the ally cards and rulebook are smattered with excellent artwork. These illustrate a grimy backdrop featuring a collection of unwholesome characters, bent on greed and vengeance. It’s by far the biggest let down in the experience, because everything else is packaged intentionally. There must have been hardships in the production process I can’t imagine because I simply can’t picture illustrating the detonation of a car bomb to be very difficult.

Players can only plan so far ahead because the mafia life brings well-laid plans to an abrupt halt. One can never feel certain of their control over an area, and like Blood Rage, sometimes it’s best to go last or delay your actions until you have an idea of where other players are focusing their attention. Because figures can vanish even a turn after they’ve been played, everything seems obtainable, but nothing is guaranteed. The best players focus 20% on strategy and 70% on tactical play—Fort Minor wishes to inform you that last 10% is luck. 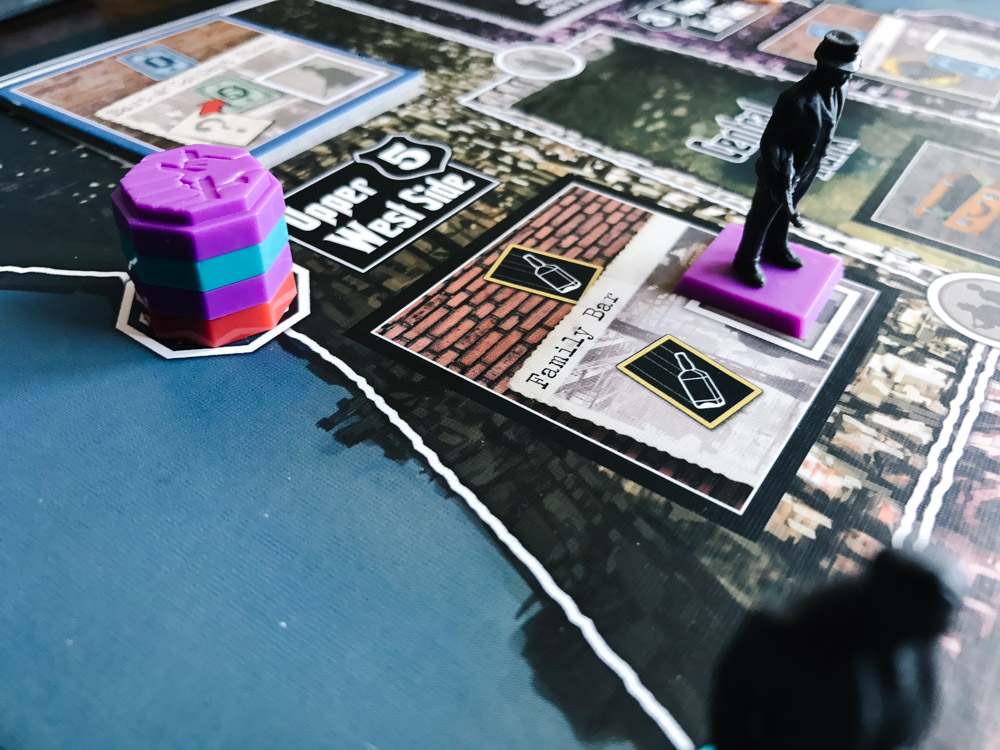 Maintaining control can be pivotal to a game. Learning where to concentrate control is the bigger question.

This isn’t to say Corleone’s Empire is random, though the piles of mass execution say otherwise. Worker placement games are indeed tactical by nature, but turn order usually plays for those in first. Here, I’ve always been okay waiting to be last to place. If someone takes that juicy spot granting two narcotics (wild resource) it’s fine by me because I have a drive-by on the way. Of course, I might eliminate that worker, only to have another player take the same spot. Timing becomes paramount.

Even if one player sneaks in for majority control over a large number of areas, players are limited by their control markers, intentionally so. One might absorb ¾ of the board two rounds in a row, but ultimately will have to remove old control markers if they want to continue dominance in certain areas. It’s therefore impossible to steam roll in Corleone’s Empire. Players must be focused on defined areas, lest they fall to the wayside.

The time bomb for the end of each turn ticks violently as well. Players simply must payout resources for jobs before rounds end or be certain to lose a handful of great options. Vito needs tribute, so players scour their hands, desperately trying to determine which cards are just barely less useful. It’s a constant weighing of what grants the most power, and discarding hard-earned cash is almost never good. In fact, unlike every other game in the world, players are not allowed to exchange values of money cards (i.e. you cannot trade in a $5 to make $2 and $3 for change). 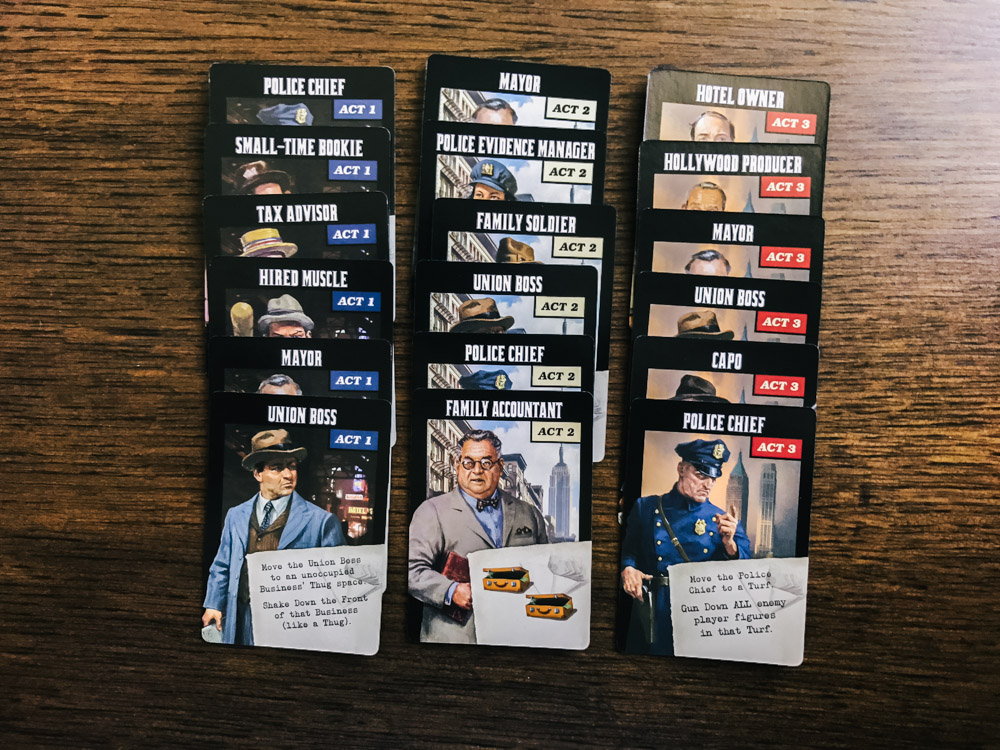 Allies to assist you in the cause for domination.

This is deliberate, as all cards share the same face-down artwork. I cannot decry this choice, because though the job and resource art is bland, never knowing what cards players hide in their hands is paramount to the design. It even evokes theme by the unknowing mystery hidden in the plans each player plots. The intrigue of which money cards hide away and which jobs might be soon fulfilled is stunning and jaw-dropping.

The Godfather: Corleone’s Empire meets the hype. It’s not overly complicated, but beautifully illustrates its theme through gameplay and all the stories friends will share afterward. Lang creates another stroke of genius, and it’s wonderful to see an IP met with such a great end. 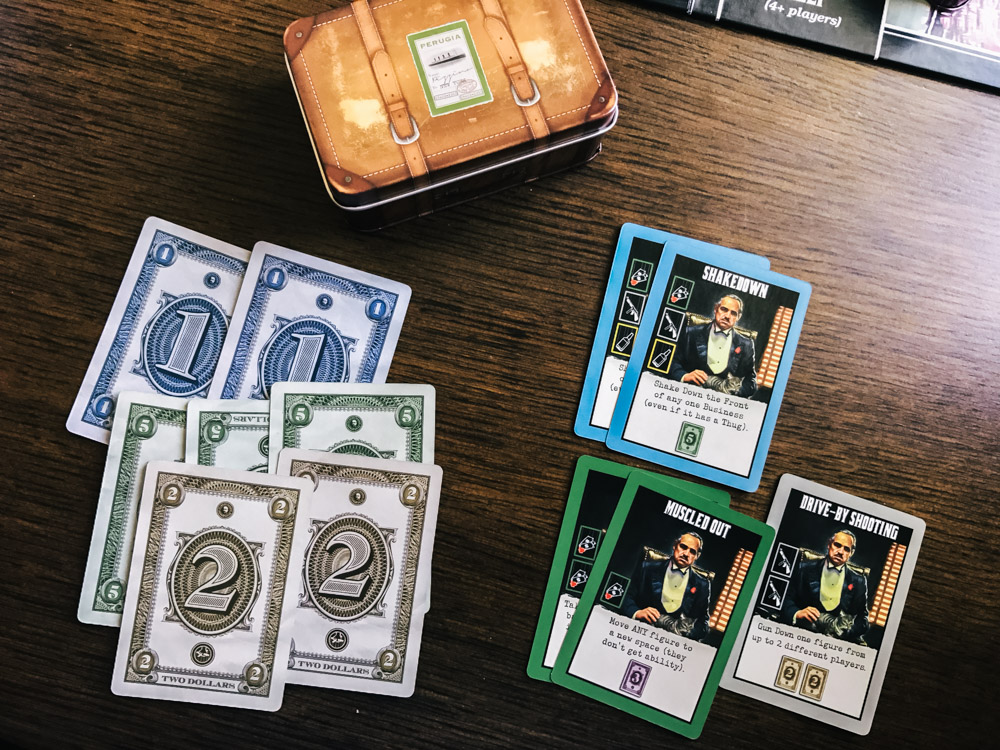 A review copy of The Godfather: Corleone’s Empire was provided by CMON.

The Godfather: Corleone’s Empire is another excellent design from Eric Lang. With overall great presentation, extremely tight tactical play, and a beautiful mix of mechanisms, each game brings excitement, intrigue, and lots of variability.