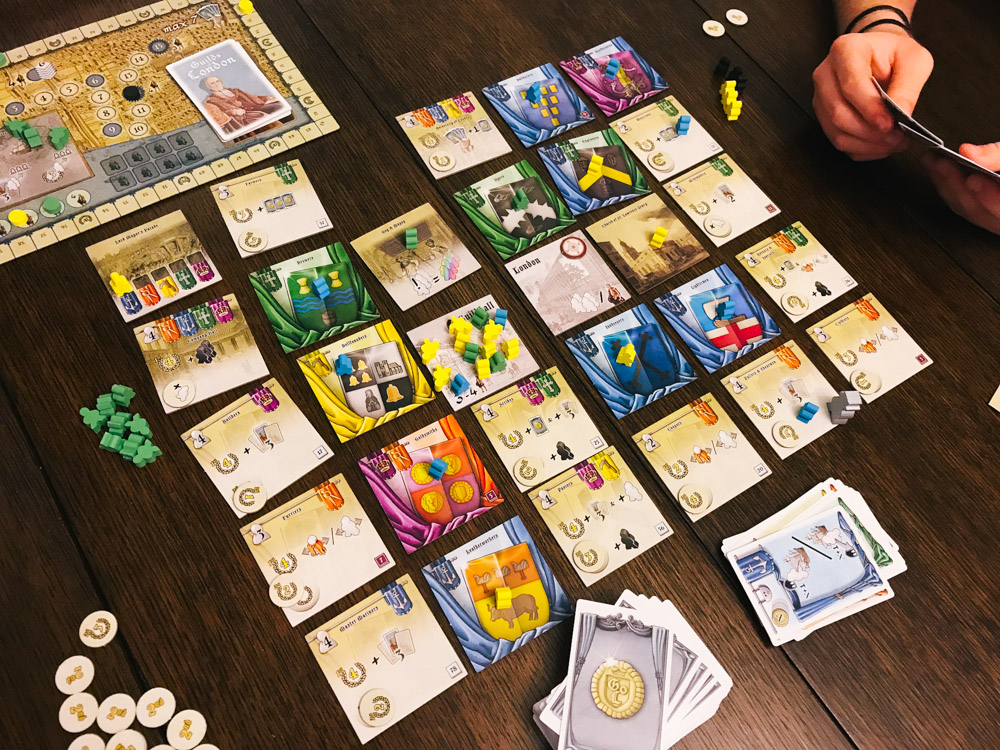 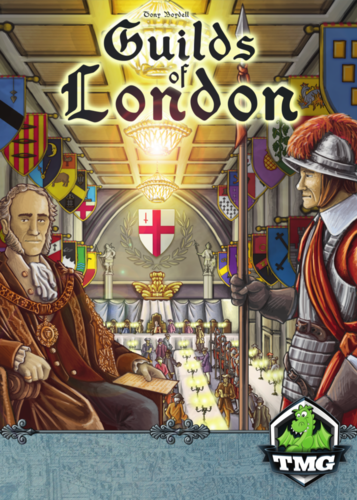 Guilds of London is an area control title featuring the building and growth of the city of London in medieval periods. Guilds of London is designed by Tony Boydell (Snowdonia, Paperclip Railways), and features the art of the famous Klemens Franz (Agricola, Caverna, Le Havre, Isle of Skye).

Tasty Minstrel Games was established by owner Michael Mendes in 2009, where Michael worked with his close friend, Seth Jaffee, to immediately begin publishing games starting with Terra Prime. TMG has reprinted a few old favorites, like Amun-Re, Colosseum, At the Gates of Loyang, Belfort, and others. Other popular titles from TMG include Flip City, Orleans, Scoville, Village, Aquasphere, Cthulhu Realms, Eminent Domain, and more. 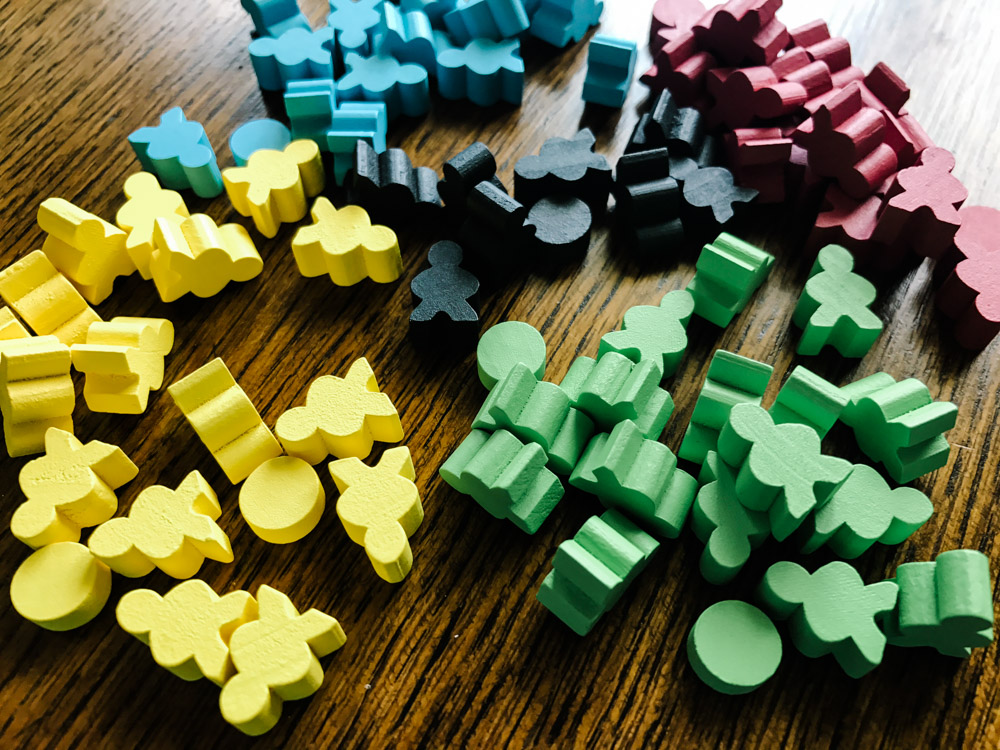 I’ve been playing a number of titles lately that seem to shine with time, read: multiple plays with the same group of friends. Guilds of London is just that. 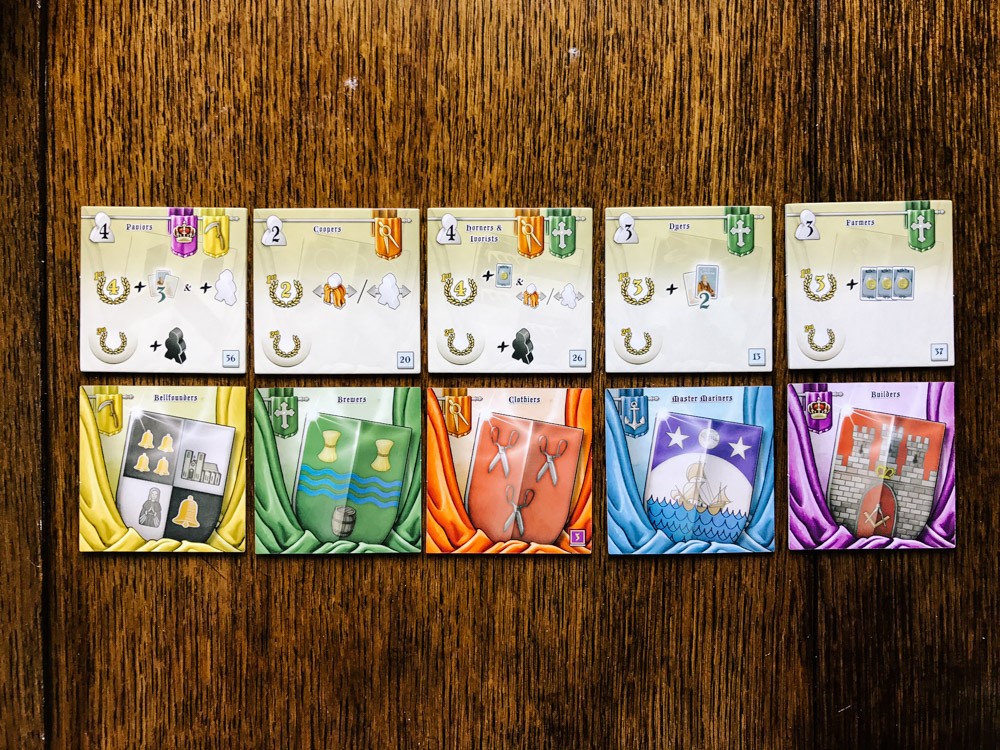 These are a few of the many guild tiles included in the game. Each game is completely unique.

First brought to my attention while watching one of No Pun Included’s early reviews a year ago, Guilds of London has existed in the wild for over a year.

In Guilds of London, players simulate the growth of London by hiring and moving a multitude of gregarious guild members. These fellows are represented by quaint meeples, and through smart cardplay, make their way around the ever-changing board to influence and gain control of various guilds. There’s some needed history, but it can summed up like so: guilds were organized and run by wealthy nobles and were critical in defining the flow of influence, structure, and commerce in medieval London.

Throughout the course of a game a dynamic selection of tiles grows outward from the original base tiles. Over time, more and more tiles are added, which means more guilds, more points, and all the more reasonS for wise, tactical planning. Players can also send guildsmen overseas to lucrative plantations to gain extra prestige and advantage.

Each guild requires a specific number to be met or exceeded in order to burst, a la Smash Up. Once this number of guild members is reached, players can connive their way into upsetting the balance with neutral liverymen, or else first and second place awards are handed out to those present. Players not only pick up rewards, but flip the tile, with first place leaving a meeple, which now becomes the guild master. This can grant end-game points, but also acts as an orthogonal +1 adjacency bonus when deciding majority control on other tiles. This is one of the ways players must plan for long term goals in Guilds of London. It means some areas of the board are not as important early in the game, but might become critical to have ownership of later in the game. Players are constantly weighing the value of locations, not only because of the guild’s rewards, but because placement is king in Guilds of London. 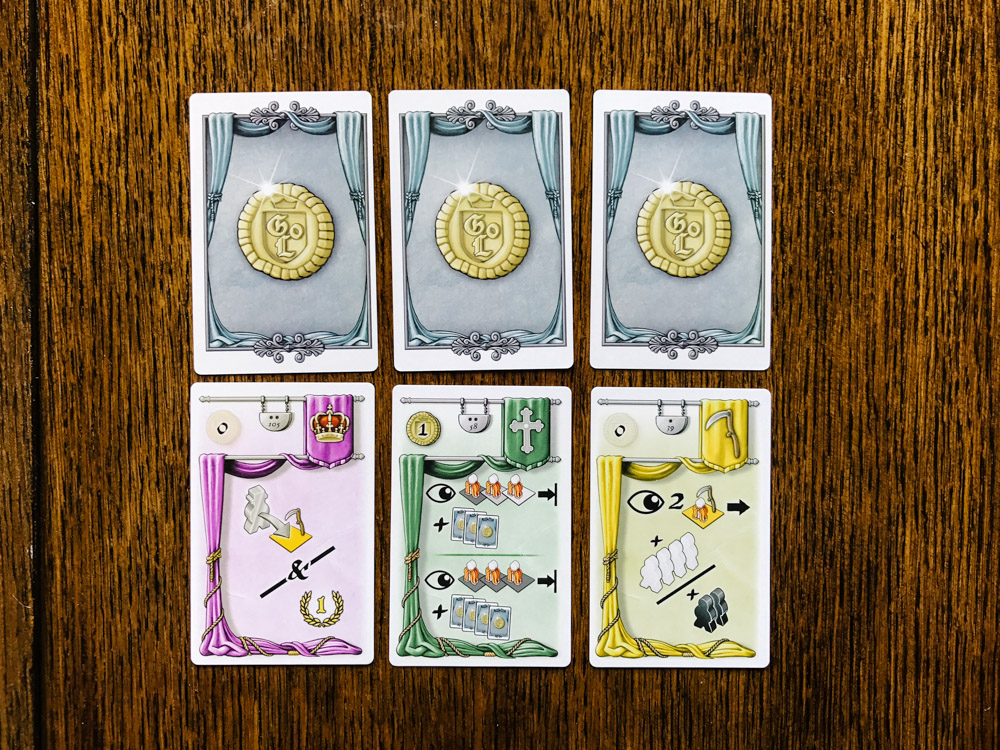 One must learn to love the cards. These are multi-use, and make for exciting combinations to discover.

In both an elegant and frustrating design choice, the entire flow of Guilds of London isn’t through heavy doses of cards of many sizes and backgrounds, but through two types of cards with dozens of icons to learn and memorize. This is excellent because Guilds of London allots for expanding complexity without the need for hundreds of loose components and tedious setup time. This also becomes a potential downfall because learning these icons and strategy of the game becomes the most glaring weakness.

One type of card is granted at the beginning of the game, but also all throughout from various guild tiles, and these are mayoral reward cards. Players vie for control of tiles to grab initial victory points, but Guilds of London prides its players on their abilities to craft end-game goals. When prompted to draw a card, players instead draw three and choose one, allowing for lots of opportunity to jam together a customized slate of end-game goals. Yes, this is fun because each game of Guilds of London will have entirely different end goals. In one game, a player might try to control lower number guild tiles, while in another game focusing on hiring as many guild members as possible—even trying to obtain second place on tiles. This pile of cards is extremely likely to run out, which is fine, because players will pick up free victory points when the deck is empty and prompted to draw a card.

Players must combine their cards with board movement to control guilds for points and favor.

The second type of card is the meat of Guilds of London. These action cards are multi-purpose, a la Race for the Galaxy or San Juan.

These cards have one or more associated guild colors, as well as a smattering of iconography. In fact, there are so many different cards with different actions and icons that the game ships with two oversized reference sheets for players to check periodically. The first time you play Guilds of London, go ahead and make yourself at home, pour a mug of hot rooibos tea, and find your reading glasses because all at the table are going to spend most of the game reading and referencing vs playing. Yes, players can familiarize themselves with some of the symbols, but with something like 40 cards with different effects and no text to assist, players must spend time learning.

This means Guilds of London‘s initial play or two will feel extremely convoluted and over-the-top. It’s going to seem unworthy of putting in the time, but this simply isn’t the case. Once a group is friendly with how cards work and the plethora of abilities, Guilds of London is akin to that frustrating mathematics or philosophy professor who started the school year as a brazen, difficult-to-understand human being. By the end of the year, you might still despise class sessions with him, but you’ve learned the material, and grown to appreciate this person and his care for teaching a room of students. Eh, maybe the analogy is weak, but you get it… hopefully. 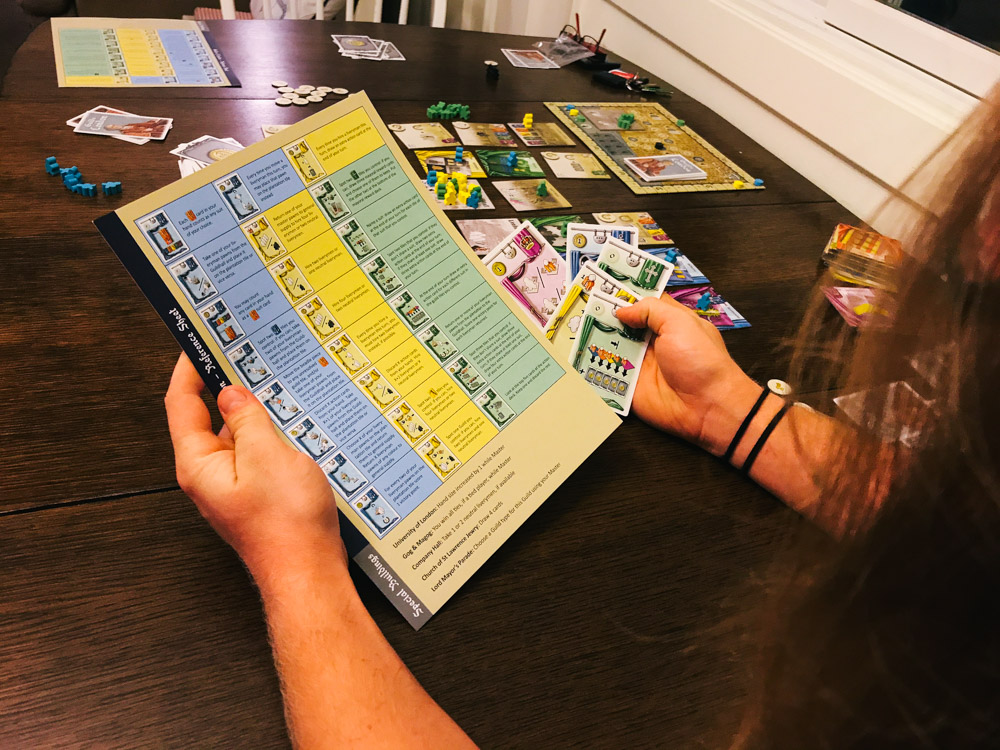 Expect to spend much of your first few games pouring over the front and back of this masterpiece.

Still, genius lies in the cards. Cards can be used to simply hire more guild members, move guild members to the associated colored guild, or spent as gold on a one-to-one ratio to activate one of the abilities on a card. If a player chooses instead to “rest,” he draws extra cards on his turn instead of playing any actions.

While the basic uses of cards are fascinating and fun to get into, learning to chain similar cards together is more of a treat. One can play cards that use a variable number that might increase one’s output of guild members among other things. Playing this card first might amplify the player’s choice of action throughout his turn. Card combinations and chain reactions can be dependent on the board state, but because both of these factors are always different from game to game, there is tons of room to develop unique strategies.

I want to be clear, Guilds of London is a lot of fun. The iconography is complicated, sure, but like Vinhos or other heavier titles, the iconography exists to make the game as clear as possible. The game is almost too much to talk about with brevity because of the many complexities it creates, but finding these timely strategies is a lot of the fun. This initial learning curve is potentially a big turn off, so if you have a group committed to learning a great game, it’s worth the time to put in. It’s also not at all simple to teach. Even reading the rules won’t prepare the rules teacher for leading the game. Guilds of London is best experienced when players jump in head first and learn the game by making tons of mistakes. Expect the first game to be rough, but the second to feel refined. Anything after that and players should begin to love the joys of Guilds of London.

If you are looking for a heavy game with tons of replayability, this might be a great one for you and your group. Considering the extremely reasonable price point, I can’t imagine this not being worth a try. 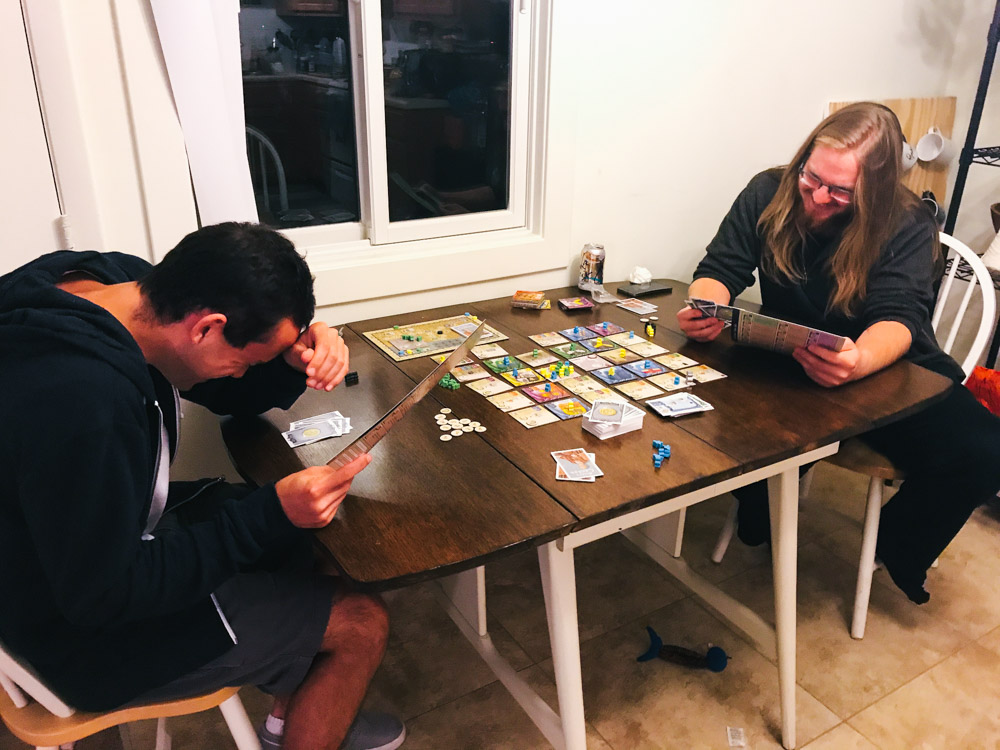 A review copy of Guilds of London was provided by Tasty Minstrel Games.

Guilds of London is an exciting game with a brutal learning curve. If a group commits to it, they are in for a great game with high replayability.