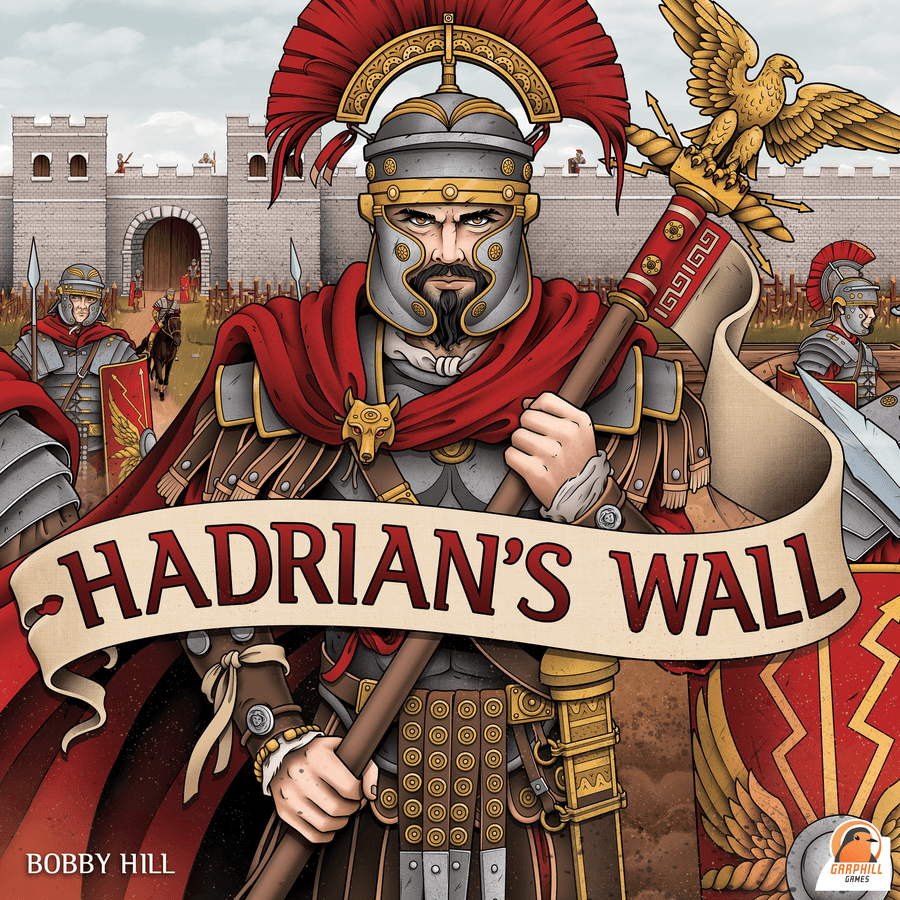 Hadrian’s Wall is a flip-and-write game in the Raiders of Scythia series (which is itself a reworking of the popular Raiders of the North Sea). In this game, players aim to earn the most points by developing their Roman fort, defending its walls, and increasing their attributes. There are a ton of roll/flip-and-write games on the market; how does this one stack up?

Hadrian’s Wall is by far the most intense-looking roll/flip-and-write game I have seen. A quick glance at the game sheets hints at just how much it has going on: 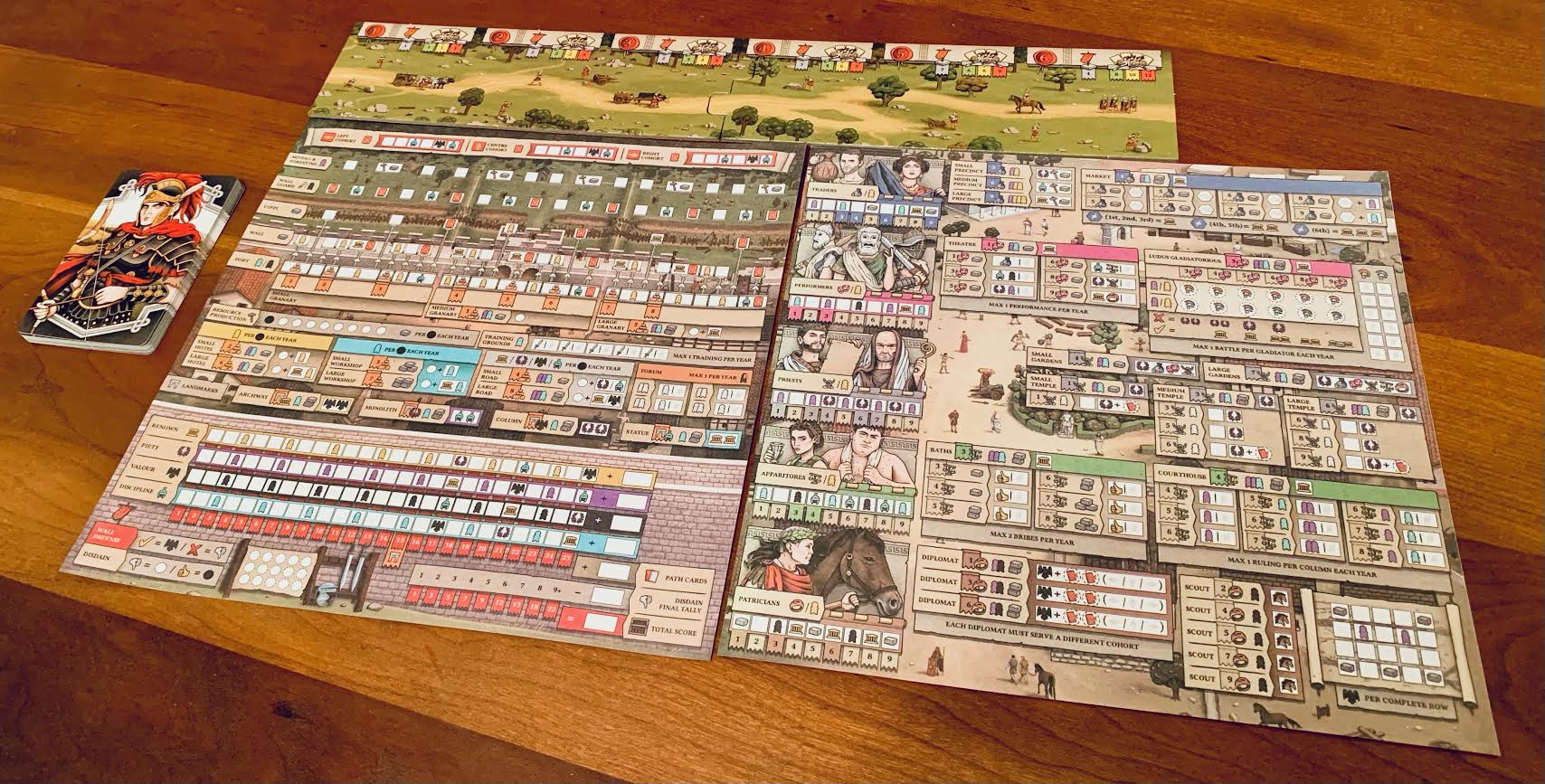 At the start of the game, everyone receives 2 sheets, a player board, and a deck of 12 cards. The game is played over 6 rounds, in which players will gain and spend workers and resources. At the end of each round, the enemy Picts will attack, and players must defend their forts against the onslaught.

To begin a round, a card is revealed which grants workers and resources to all players. As the game progresses and players build their engines, they may earn additional workers/resources, as well. Everyone then draws 2 cards from their personal deck and chooses 1 to use as a “path” and 1 to use as a “prospect.” Paths are tucked underneath the player boards; they provide scoring opportunities. 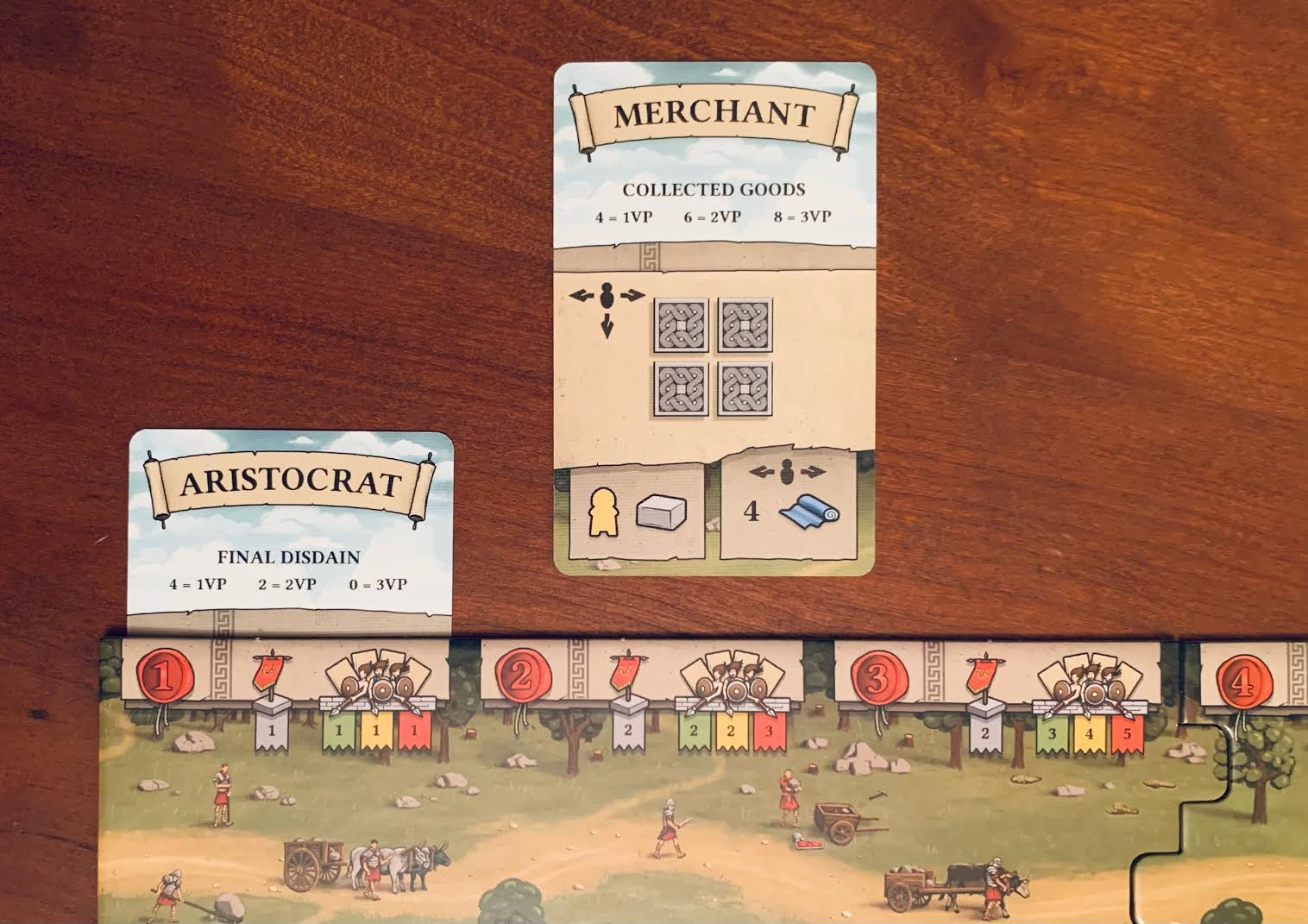 Prospect cards are placed to the side; they provide extra workers and resources. Players then simultaneously choose and execute actions; Hadrian’s Wall does not have a traditional turn order.

Now, for the sake of brevity, I won’t be going into the specific details of each action, as there are far too many to cover and doing so would make this review quite unreadable. Instead, I will try to give a general sense of what players do on the macro-scale.

For starters, many of the actions are incremental, such as tracks which are filled from left to right or buildings/areas which are filled from top to bottom. Some actions have no designated order of resolution, but players must meet listed requirements to advance on them. As for what the actions do, some are defensive, protecting players against the attacking Picts, others help to build an engine, providing resources or increasing start-of-round production, and still others offer immediate and/or ongoing rewards.

Some tracks/buildings are tied in with others, such that advancing on one requires first advancing on the other. For example, common buildings require that a certain level of infrastructure has been reached before they can be constructed; infrastructure comes from advancing on the Fort track. The Cippi and Wall tracks likewise rely on the Fort track, which itself relies on developing larger Granaries. And of course, everything requires resources/workers, meaning that everything is interconnected.

Put simply, Hadrian’s Wall is one of those games in which players want to do everything but have neither the time nor the resources to do so. The game lasts a mere 6 rounds, so players have to think carefully about how they want to approach the strategy. Should they choose 1 or 2 areas to focus on, or should they try to do a little bit of everything? The game is tightly designed, so it’s up to players to make the most of each action.

At the end of the 6th round, points are scored. The majority of the points come from Attributes, which players gain as they build out their tableaus. The player with the most points wins.

As I said before, this review is a very broad look at Hadrian’s Wall. There is a lot of minutiae to this game, particularly in the way that the different parts of the tableau play off of each other, but the thoughtful iconography helps it to feel intuitive. 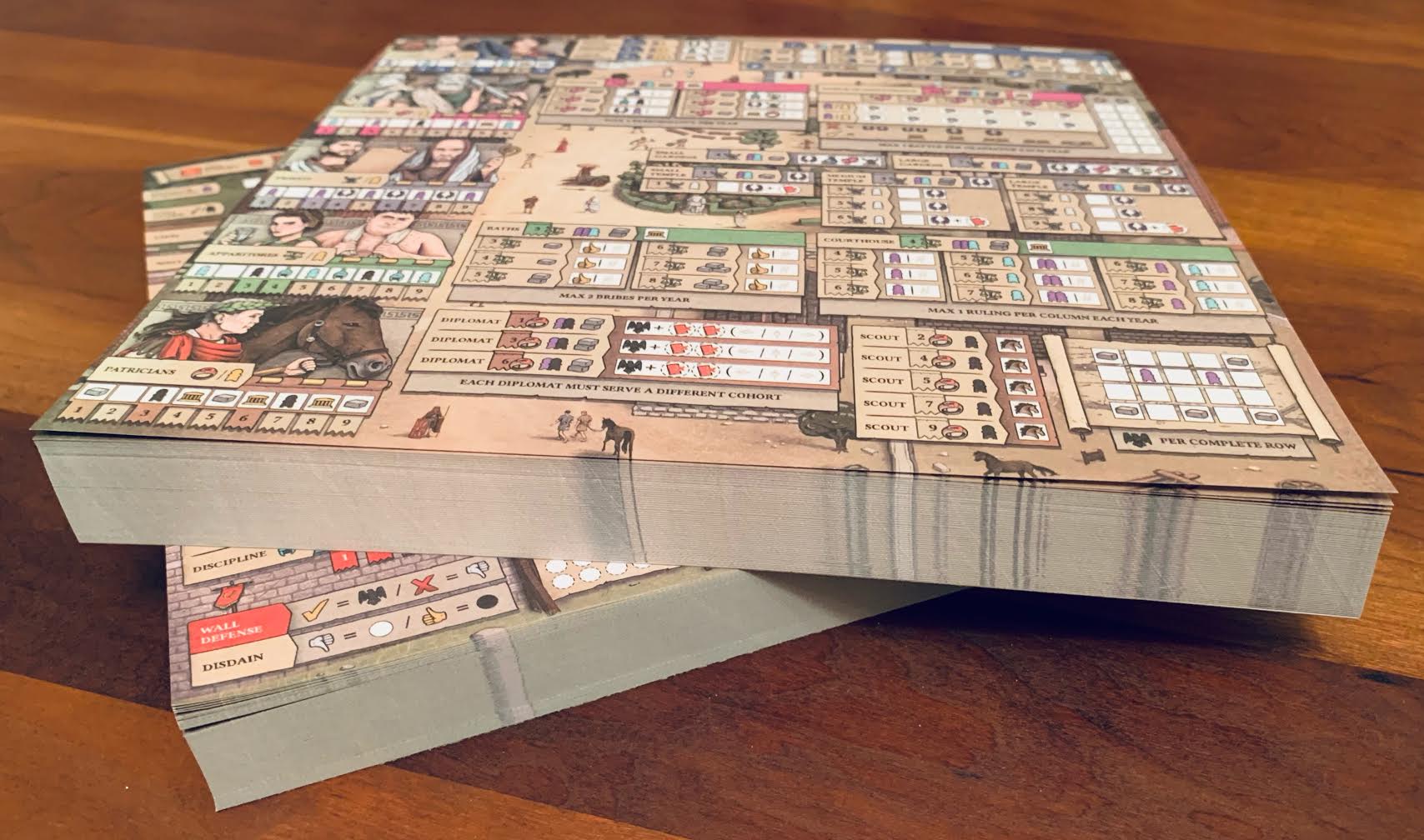 The sheets are not double-sided, but there are a TON of them.

I typically associate roll/flip-and-writes with super-light gameplay, so I was surprised at the level of strategy in this game. Make no mistake, Hadrian’s Wall is a meaty game full of interesting decisions. It fits well alongside the other Raiders/Architects titles, though it feels more like “multiplayer solitaire” than those games since it does not have a shared board. It is not totally devoid of interaction – the scouting action, for instance, allows players to use a neighbor’s prospect card – but on the whole, players mostly focus on their own tableaus without worrying about what opponents are doing. As such, I think I prefer this game as a solitaire experience.

The production of Hadrian’s Wall is nice, with lots of workers and resource bits. Most importantly, the sheets are laid out very well. At first glance, they look overwhelming, but the symbols and design choices help players understand how everything works together.

As for who would like this game, I recommend it (unsurprisingly) to fans of the other Raiders/Architects games. Its nature as a flip-and-write makes it feel different than those, but it provides a similar strategic “flavor.” I also recommend for it for folks who are looking for a deeper experience than most roll/flip-and-writes provide. If either of these sound like you, check this one out.

Hadrian's Wall is easily the most strategic roll/flip-and-write game I have ever played. Its complexity gives it a steep learning curve, but seasoned euro gamers will probably find a lot to like.