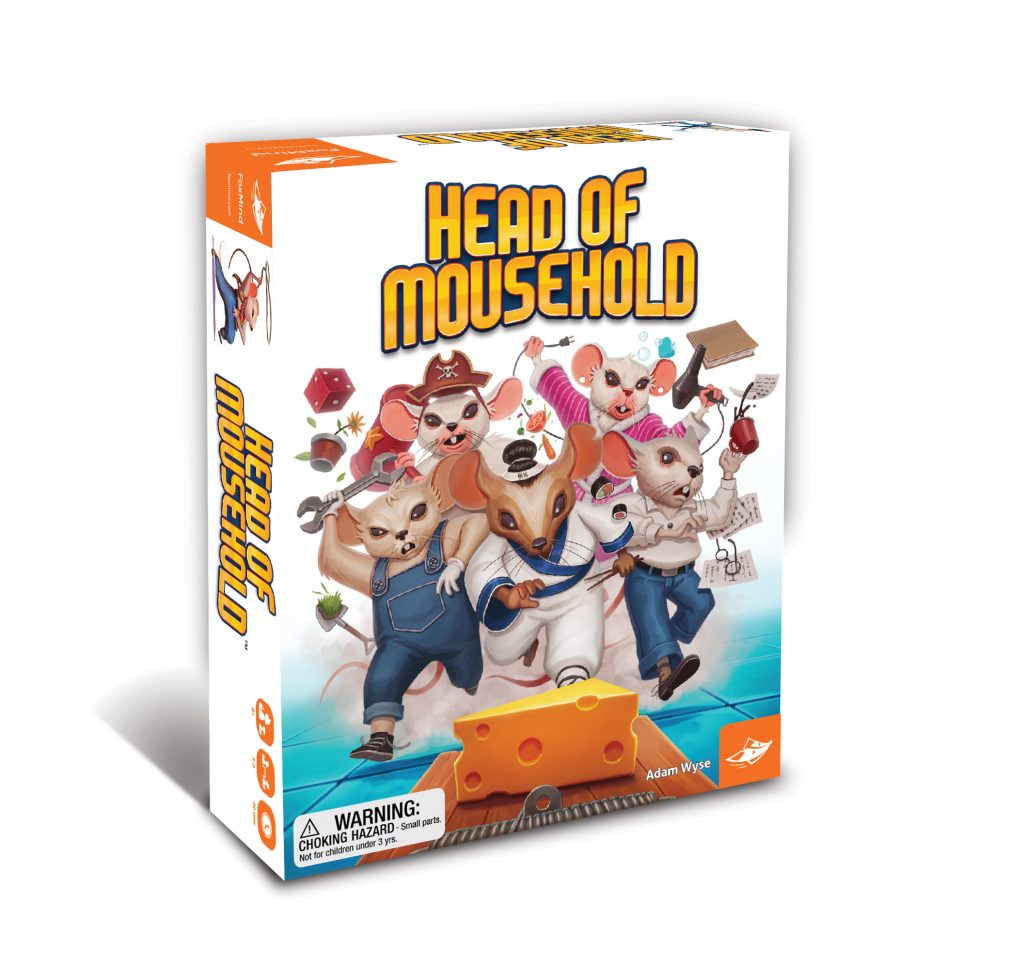 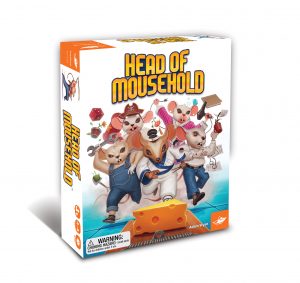 In recent years, FoxMind Games has moved its focus away from educational games towards games focused on gamers and families, but still light and quick. Head of Mousehold is a great example of this—there’s plenty to think about it here, but the game wraps up very quickly and has simple, fast turns. In Head of Mousehold, players are trying to be the second (or sometimes third) mouse to get to the cheese, because the first mouse gets caught by the mousetrap! Is it just a cute theme, or is there gameplay to back it up? Let’s find out!

The game has a pretty innocent theme: sending mice to get cheese. However, many of the mice die from the mousetraps or the house cat, so it may be a bit morbid for very young children. Nothing here should be offensive to adults.

Every once in awhile, I read a mechanism in a rulebook that I can’t tell if it’s there just for “cute” reasons to make the theme work, or if it actually adds to the gameplay. Two of the central rules in Head of Mousehold made me feel this way. The first, and perhaps most important rule of the whole game, is that when cards in front of a mousetrap are arranged by their speed (some mice are faster than others!), the first one dies by the mousetrap, and the second gets the cheese. The second, equally ridiculous rule is that some mice are “squeakers”—and if such a mouse was killed by the mousetrap, it makes a bunch of noise, and the second mouse is also killed—by the housecat—and the third mouse gets the cheese. Cheese, of course, is what victory points are made of. To my surprise, both rules work extremely well.

Each round in Head of Mousehold, players take turns playing three mice cards in front of mousetraps, hoping that their mice are the ones who get the corresponding cheese tokens. Every rule along the way guides this process, making sure that players end up with equal parts deduction and bluffing. Right off the bat, you have to pick your cards and telegraph to your opponents (using colored mice meeples) which colors you are using. Then, cards played in front of each trap alternate between face-up and face-down, leaving a fair amount of simple-but-uncertain factors at play throughout the round. Players can occasionally, but rarely, exactly deduce the current situation—most often, you can narrow it down to two things your opponent might have done, and then you have to go with your gut and your understanding of your opponent to decide the best course of action, as with most great bluffing games.

Overall, this system works, and works well. There are definitely tough decisions to be made throughout each round. However, overall there’s not a lot of variability. Each round, you are simply playing three colored cards, and there’s no escalation or engine-building from one round to the next. While the speed of each color mouse is mixed up each round, and the value of each mousetrap changes as tokens are added, there is nothing completely “new,” like going through new cards available for purchasing in a deck-builder or an engine-builder like Splendor or Spice Road. The advanced variant uses Event cards each round, but there aren’t that many of them, and they can occasionally be frustrating or awkward since they are revealed after playings have already picked their mice. They can also lead to rules confusion in an otherwise straightforward game—for example, one promo card Event lets you play an additional mouse card, but since Events come after card selection, I’m not exactly sure how that works.

I find that the variability is not that much an issue in your first few games, although occasionally rounds have ended with a player’s last card being useless, or we’ve deduced that it will give the exact same result regardless of where the player puts it. The issue is more with replayability. The first few games actually have Head of Mousehold opening up more and more as you see clever ways to play your cards, but there are only finitely many ways to do that when you’re only playing three cards a round. In particular, you lose a lot of agency with high player counts; this is probably best at three players. Once you’ve seen most of the tricks, this might be a game you bring out less often.

However, this is a game that is clean and simple to explain, and the mechanisms not only work well but are tightly aligned with the game’s theme, making learning the game that much smoother. It offers a smattering of bluffing for people who don’t like “lying” games like The Resistance, and it plays fast enough that it’s easily played twice in a lunch hour once people know the game. And I can’t really hold its lack of variability too heavily against it: we played Euchre day after day for two years in high school, even though the game is mostly a pointless exercise. Head of Mousehold is a much stronger game than that, and there very well could be a group of mice-lovers eager to enjoy this game to its fullest.

Thank you to FoxMind for providing a review copy of Head of Mousehold.

Head of Mousehold's cute theme and clever antics make for a great lunch time game, but the game doesn't quite have the legs to be a perennial favorite.