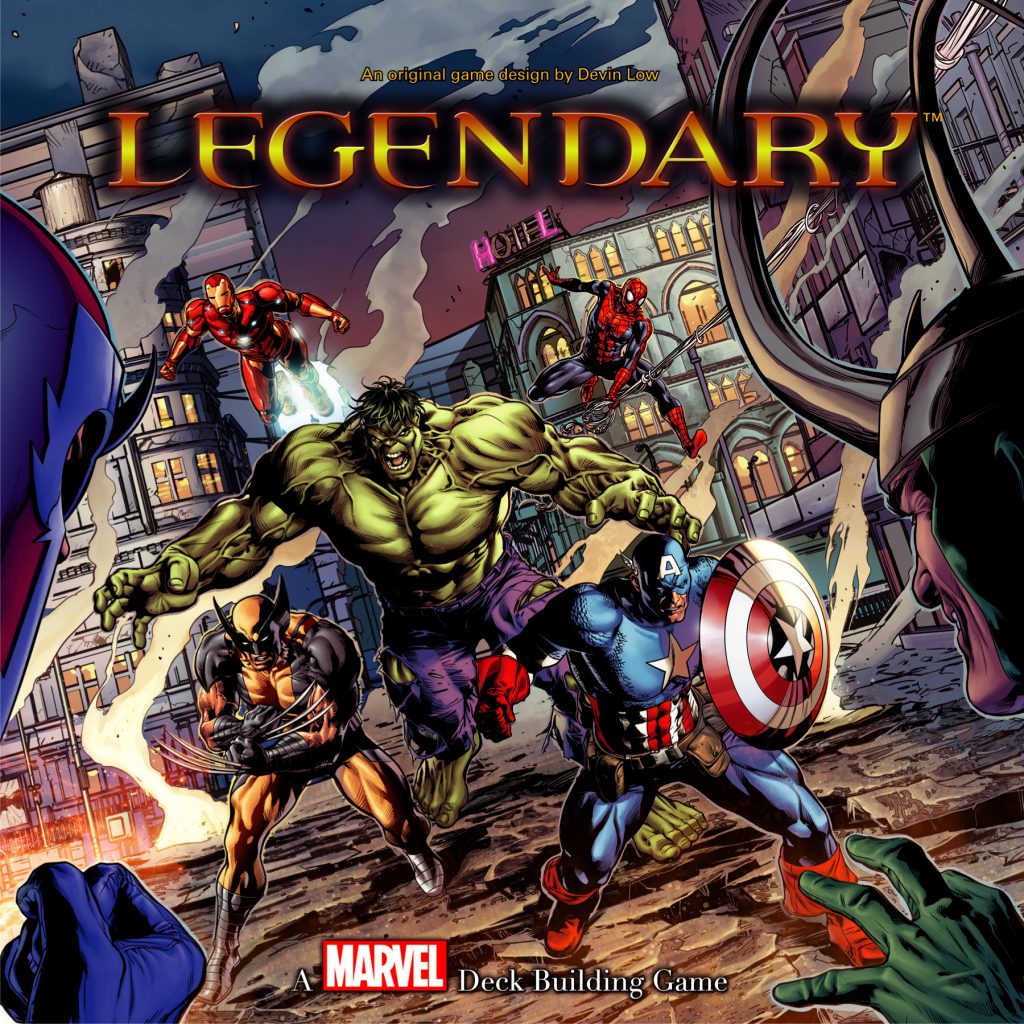 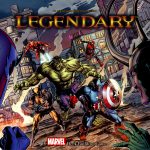 Everywhere you look anymore, there are superheroes everywhere in pop-culture. Their immersion into our culture is deeply embedded for many reasons, but in recent years, one comic-book company turned multimedia force seems to command the most attention: Marvel.

The “house that Stan Lee” built continues to this day because we can’t get enough of those empowered to battle against villainy, injustice, and oppression. To illustrate the ubiquity of the property, one need only show the youngest of children images of popular heroes like Captain America, Spider-Man, Iron Man, or the Hulk. The excitement and recognition these images stir up speaks more than I ever could here. Whatever the context, most everyone has some association with Marvel, be that slight or deeply rooted. With that in mind, it’s no wonder that Upper Deck and the designers behind Legendary utilized the ample history and pure recognition factor of Marvel’s many decades of comic lore to serve as the core of their game.

Still, let’s get down to it: is Legendary worth your time (and money)? While the game has been out now for several years and is supplemented by a robust selection of multiple expansions, as well as “reskins” and “reinterpretations” of the original core game using other properties under the Legendary Encounters label, does that base experience released in 2013 have enough going for it to justify purchasing it, even for tabletop fans who aren’t all that crazy about Marvel? 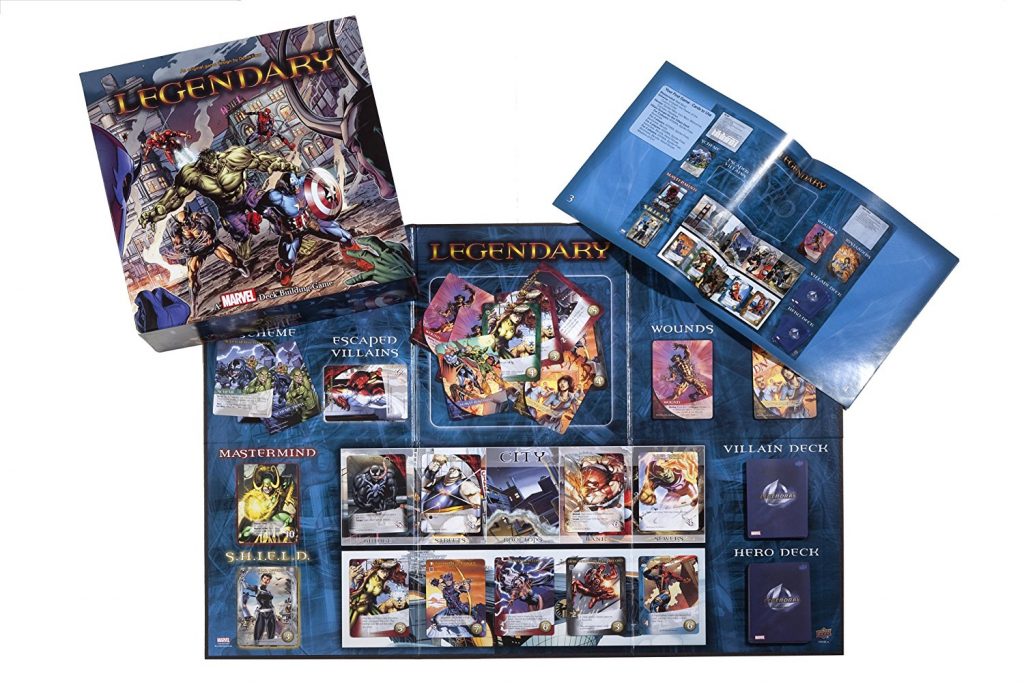 All set up, it’s quite an experience.

Spiritual Content: Some Marvel heroes and villains are magic-based; magic power or otherwise, the villains are obviously up to no good. Expansions add more arcane abilities and characters than the base game, but if Marvel Comics in a general sense offends your sensibilities, then you will likely take issue. If not, then you won’t.

Violence: The game is focuses on villain encounters, and while there are no gory depictions on the cards, the “fights” between cards might be perceived as violent.

Language/Crude Humor: In this base game, there was never anything I came across that would fit this description.

Other Negative Themes: The game is built on attacks. While struggle and battles are known worldwide, there are many who might prefer a less “aggressive” game. Nothing struck me as a reviewer and longtime comics fan as inappropriate, but there may be some who take issue.

While there are many videos and guides for how to play Legendary all over the internet, players begin the game by choosing a “Mastermind” villain to face in the game; whether it be Red Skull, Dr. Doom, Loki, or Magneto, these villainous leaders carry effects throughout the game through their attack cards, as they carry out a “scheme” (also with effects) and command a villain deck filled with various henchmen that make their way down a lane each turn; sometimes, those villains bring along bystanders that need rescuing, as well. While the base game may seem limited in only four “masterminds”, the henchmen combinations keep games unique; obviously, expansions increase this exponentially, but there are plenty of unique sessions that can emerge from just the base box. 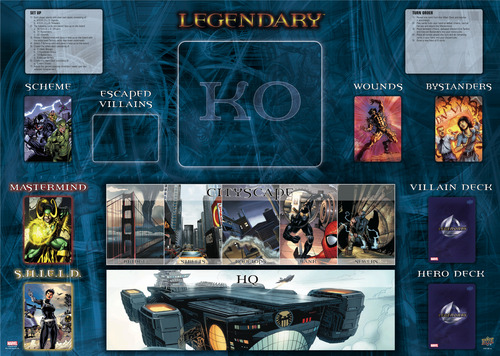 With all cards removed, you can still get a good feel for how the game plays.

Alongside the villains, players choose particular heroes from fifteen included hero decks, that are then shuffled and placed in a lane for purchase by players (called “recruitment” in the game). Starting the game, each player has a hand of low-cost and low-powered S.H.I.E.L.D. hero cards, which are used to obtain more capable superheroes for their hand. If point values are too much for a superhero, there are low-cost S.H.I.E.L.D. heroes for sale throughout, as well. Each turn, a card is played from the villain deck, which pushes the other cards down the lane; unless each villain is dispatched by players, they can escape, which can cause problems for players. Wound cards, in particular, bloat decks by being useless filler, so if dealt one, players can do their best to rid themselves of them. Particular heroes and villains have unique abilities that come up in play, and when villains are dispatched by each player, they are collected as points for the end-game. At the end of each turn, each player discards their hand, draws more from their draw pile, and reshuffles when empty. The main thrust of the game is acquiring better hands through enlisting more heroes, dealing with villains and attacks as they come, and, ultimately, stopping the Mastermind from carrying out his schemes. If players can’t do this, collectively, they all lose; if they are successful, points are tabulated from the villains defeated and bystanders rescued to score each player to crown the match’s ultimate winner.

Admittedly, attacks don’t carry the heft that some deck-builders can have (at least in my playthroughs). The license carries with it a meeting of heroes and familiar foes, but as far as mechanics go, turns mainly consist of dealing with enemies as they come down the line. I’ve heard it said that letting villains escape doesn’t often amount to anything except victory points not gained by any player, and in most playthroughs, that assessment is correct. Still, working alongside to ensure enemies are dealt with is a constant thing throughout any game. Because of this, the base game is an interesting hybrid of sorts between a purely competitive deck-builder and a cooperative experience. This allows it up to five players, but in the end, someone will win, unless all players lose. Whether it be single-player or with multiples, the amount of cards used can change, but the core experience is the same. The “fun” suffers slightly when playing by oneself, but that isn’t a drawback unique to this title.

Setup for the game can be cumbersome, especially for Marvel fans who are completely new to tabletop. I would suggest organizing cards and labeling dividers to keep things at the ready for game sessions. For those who play often and like to leave the choices of who to battle and which heroes to utilize up to chance, there are several different randomizer apps out there that do a great job of making unique matches that you might not have otherwise thought of.

In discussing components, you get a large box and instructions, unlabeled divider cards, and, of course, cards…many, many cards. At 500 cards, it’s a lot inside… and a lot to sleeve, if you’re so inclined. With decades of art to draw from, I have to mention that the art in the base game is slightly underwhelming.

A major criticism of the base game is that each hero card for a particular hero, regardless of the ability for it, has the exact same image on each card. I hate to say it, but this makes the entire game have a somewhat bland feel, especially when compared to other deck-builders. This is a problem that Upper Deck responded to in expansions, diversifying the art style, but now, having been several years out from the original release, I would think that they should have did a second edition to correct this issue. It slows down play when each card must be read, rather than recognized, plus there is a wealth of great art ready to be utilized in the back-catalogs of comic book issues or to be eagerly supplied by artist who know the characters the world over.

My first game ever of Legendary, I played with two other players, and we had the entire gamut of expansions at our disposal. While I am solely reviewing the base game, I can say that this is a title where expansions do increase the experience quite a bit. The core set is good by itself, and it can provide some mileage for those casually interested; still, if a player wants to play often, planning out expansion purchases based on their personal affinity for characters and the unique experiences each set brings is something I would advise looking into. Of course, one could plan to purchase all, and they wouldn’t be alone in that pursuit.

In the way of game strategy, at least in the base game, I never felt particularly challenged in the game by any session I’ve played; while it might seem like it, that’s not entirely a bad thing. When it comes to card games, there is always an unpredictable nature to it all; call it luck or otherwise, it’s always there. Still, the flow of the game keeps things clipping along, whatever card is played, and considering the amount of decks on the board, that’s saying something. The best sessions I’ve had focused on the cooperative aspect above the competitive side. It may just be my circle of friends, but we enjoy playing together more than against. That said, there is a feeling of teamwork that comes from this game naturally, and it pairs brilliantly with the theme in a way that doesn’t ring false in any way.

When I play Legendary, fun happens, and what else should we expect from a tabletop session besides that? Granted, I’m a lifelong fan of all things Marvel, but I’ve played some terrible games before. This isn’t one of them. Good design flows with a theme, not against it; saying that, I believe the core gameplay is brilliant here, and I’m sure there are many, many players who would agree. Having played with deck-building novices and dedicated players, I’ve been surprised to see that everyone I know that has played it enjoys it, be it kids or adults.

While other deck-builders can hold hidden layers of nuance, Legendary lays it all out on the table with fairly simplistic, unabashed fun. In film terms, some are complex films, whereas, not too far diverged from its roots, Legendary is a crowd-pleasing popcorn flick. Legendary is quite a title for a game, but I believe that even with its faults, this game truly earns it.

Colby Bryant currently serves as the Music/Youth Minister of Oak Grove Baptist Church in Hugo, Oklahoma, and he served as Pastor of Archey Baptist Church in Soper, Oklahoma for several years prior. He and his wife, Stephanie, have three children. He enjoys adding to his extensive knowledge and collection of movies and TV by watching and collecting as many as he can, and he gets in as much video game and tabletop playtime as his schedule will allow. *** John 14:6 - Jesus said to him, "I am The Way, The Truth, and The Life. NO ONE comes to the Father except through me." ***