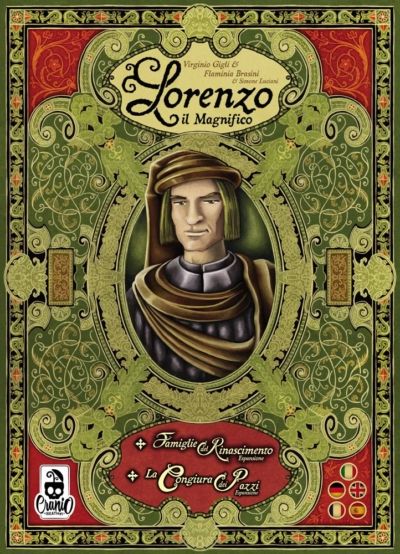 A few years ago, I would have pointed out a group of French designers as the standouts in collaborative game design: Antoine Bauza, Bruno Cathala, Serge Laget, Ludovic Maublanc, and a few others. But recently a group of Italian designers has had hit over hit: the three designers of Lorenzo il Magnifico are partially responsible in various ways for Tzolk’in: The Mayan Calendar, The Voyages of Marco Polo, Grand Austria Hotel, Coimbra, and many more. Those last two together with Lorenzo il Magnifico are sometimes called the “dice trilogy”, despite not sharing the exact same set of designers. Lorenzo did very well when it came out in 2016, and it still sits within the BoardGameGeek Top 100. Now it’s back with a new edition containing all of the prior expansions as well as the base game – but is the game still good, five years later? Let’s find out! 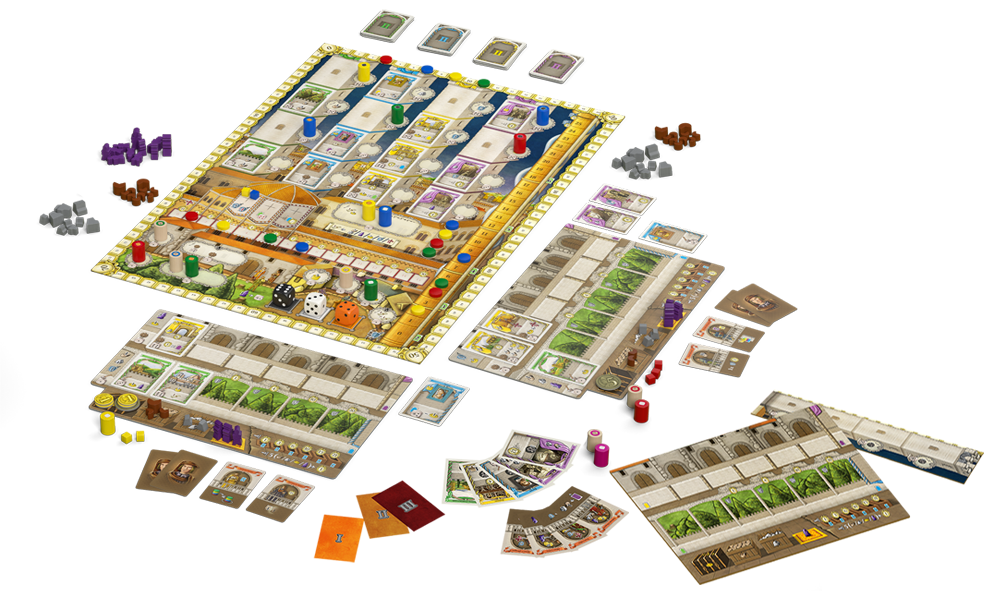 First off, don’t be fooled. While BoardGameGeek erroneously bills this as the “big box,” it is not a big box. It includes a ton of content, more than your money’s worth, but it’s the same size box. No insert is included (it couldn’t possibly fit anyway) and it’s incredibly tight to try and put everything back in the box, especially with sleeved cards. I would have vastly preferred a typical 12x12x3 (Ticket to Ride) style box with an insert and specific places to store things. I could even see that with a slightly higher MSRP. But as it is, you’re getting quite a bit of bang for your buck, even if it’s disorganized.

Of course, in this era of big boxes and all-in Kickstarters and five expansions before a game is even released… Do I need all of that extra stuff? Well, not right away. Lorenzo il Magnifico is quite a beast on its own, although this is more of a medium-weight game (think Kennerspiel des Jahres winners like Wingspan or Istanbul) than a three-hour monstrosity. As part of the “dice trilogy” by various subgroups of these Italian designers, it is about the same complexity as Grand Austria Hotel and Coimbra. However, Lorenzo il Magnifico gets away with something that the other two do not.

In Coimbra and Grand Austria Hotel, the designers have set up extremely clever and complex dice systems to tantalize the heavy strategy player. And for the most part they work, but with both titles I occasionally found myself too entangled in the rules systems to clearly and cleverly think about actually playing the game strategically; I was too focused on figuring out what I can do to focus on what I should do. Lorenzo does things entirely differently. It is a “traditional” worker placement game, except the worker spots require different values of dice. At the beginning of a round, three dice are rolled to set the values of the workers, and that’s it. It’s so simple, it’s suspicious.

Of course, from that beginning concept comes the rest of the game: different card types, a neutral “0” worker, resources to adjust your dice, engine-building elements with certain card types, and so on. But the dice system is so basic that I found myself thinking that it surely wouldn’t work. Yet, because it’s so simple, I found it to be the best game of the trilogy. Rolling the dice each round leads to an incredible amount of tension and forces a lot of tactical thinking when the dice don’t land how you wanted. But, because I’m not mired in complex systems, I have the brain space to focus on the interactions on the board and between players.

The game keeps that delicious tension flowing in other ways too, such as the risk-reward faith track, and the worker placement itself. While the board may at first seem like it has too many spots for workers, many are costly and players often want the same thing, or feel that they should “hate draft” certain cards. The worker placement is actually quite competitive, and I remember several shouts of “Nooo!” in our games. (In a good way!)

The hard part of Lorenzo is learning the iconography, but it’s nowhere near the level of something like Race for the Galaxy, and it’s fairly easy to remember after the initial effort to learn it. It helps that a lot of the icons are consistent across several games by this group. But once you’ve memorized the icons you might have also memorized the card decks as well. The same set of cards comes out every single game, so you can “count” on any particular card to show up eventually. For some players, this might be a little underwhelming after a while. Fortunately, the “big box” comes with all of the current expansion content for Lorenzo. This includes many additional rules like Leaders, a fifth column of cards, and so on. But the main thing for me is that simply upping the card variety on later games is enough to keep the game interesting for a long time.

Lorenzo il Magnifico really is a masterpiece of game design. I wish the theme was something more unique or at least interesting, and the box really is too small. But if you’re interested in this game, my guess is that you’ve long since put theme aside to focus on juicy, delicious gameplay. And for the time and rules investment, you can’t do much better than this one.

Thank you to Cranio Creations for providing a review copy of Lorenzo il Magnifico: Big Box.

Lorenzo il Magnifico is an excellent strategy game, and this is the best version of it.