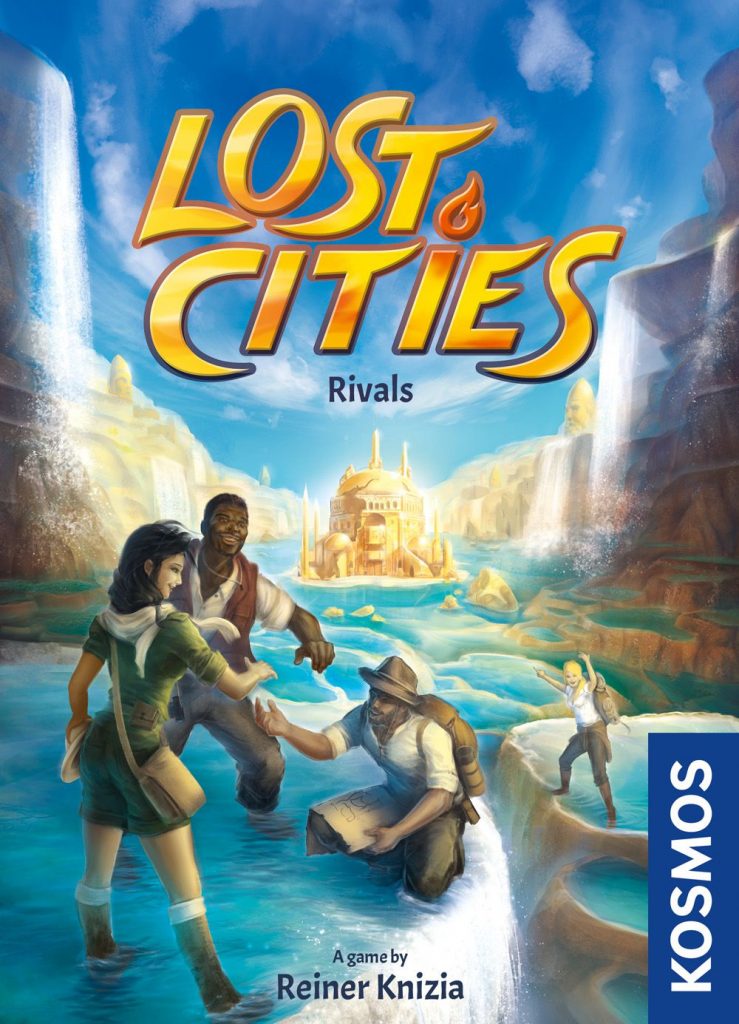 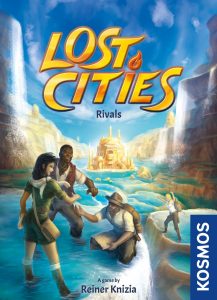 Like many others, Lost Cities was one of the first modern board and card games that I played. It’s been reworked into a board game—which itself was reworked into a dice game, another board game, and another card game—and now, here we are yet again with a card game focused on auctions. Is the well dry yet? Let’s find out!

This is a card game about colors and numbers, and the artwork consists of different landscapes. Nothing offensive here, unless you hate nature. 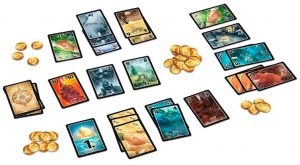 In all the iterations of Lost Cities, the fundamental tension comes from a simple concept: you must play your cards in sequential order, and skipping numbers that might appear later forces you to make calculated risks. My favorites in the series are the versions that allow you to adjust for those risks with special abilities and combos (Keltis: Neue Wege, Neue Ziele and Keltis: Das Orakel). In Lost Cities: Rivals, players are, instead, calculating their risks in an entirely different way: with money.

Rather than the typical, and somewhat mundane, Lost Cities approach of drawing one card and playing one card, Rivals has players bidding on piles of cards—even allowing for some damage control by letting players “destroy” an undesired card in a won lot. To me, this feels sort of the opposite of the aforementioned comborific games. Rather than letting players undo past mistakes (e.g. removing a card that was a bad idea from the end of a column), Rivals doubles down on the risk management up front, as players can be punished not only by making bad columns, but also by running out of money far too soon. Fortunately, the game has a mechanism for redistributing spent wealth every so often, which also leads to interesting tactical decisions as those moments approach. But overall, I think this is one of the more punishing versions of Lost Cities. 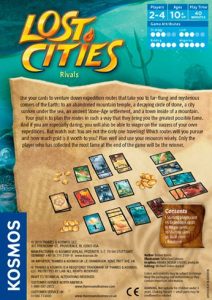 Because of the punishing nature, this is one of the tighter, more cerebral editions of Lost Cities. That’s not really that surprising, since auction games tend to lean that way anyways. And looking at it from the perspective of auction games instead of the Lost Cities legacy, this is one of the simpler auction games serving as a great introduction to the genre. It’s much less punishing than something like Steam that players might eventually step up to from here. My suspicion, based on the branding of the game, is that people are usually coming at this from the Lost Cities angle, not the auction angle.

It does fine, but it doesn’t really shine. It’s tightly designed, it works, it’s quick and efficient, but it’s lacking that extra something. Flashier versions of Keltis made their appeal with comborific special abilities, but Lost Cities itself managed to become as popular as it is through its simplicity—through that primary tension of “should I, or shouldn’t I take that risk?” But the drama that unfolds in Lost Cities is more enjoyable because the risks are much clearer for the player. Here, a failed risk can come across more frustratingly, and less “ohhhhh man, what did I just do to myself!”

Overall, while the game plays four and has a lot of the same roots as the other Lost Cities / Keltis games, it doesn’t grow into something as great as its legacy.

Thank you to Thames and Kosmos for providing a review copy of Lost Cities: Rivals.

Lost Cities: Rivals is well designed, but it doesn't have the je ne sais quoi of the original.