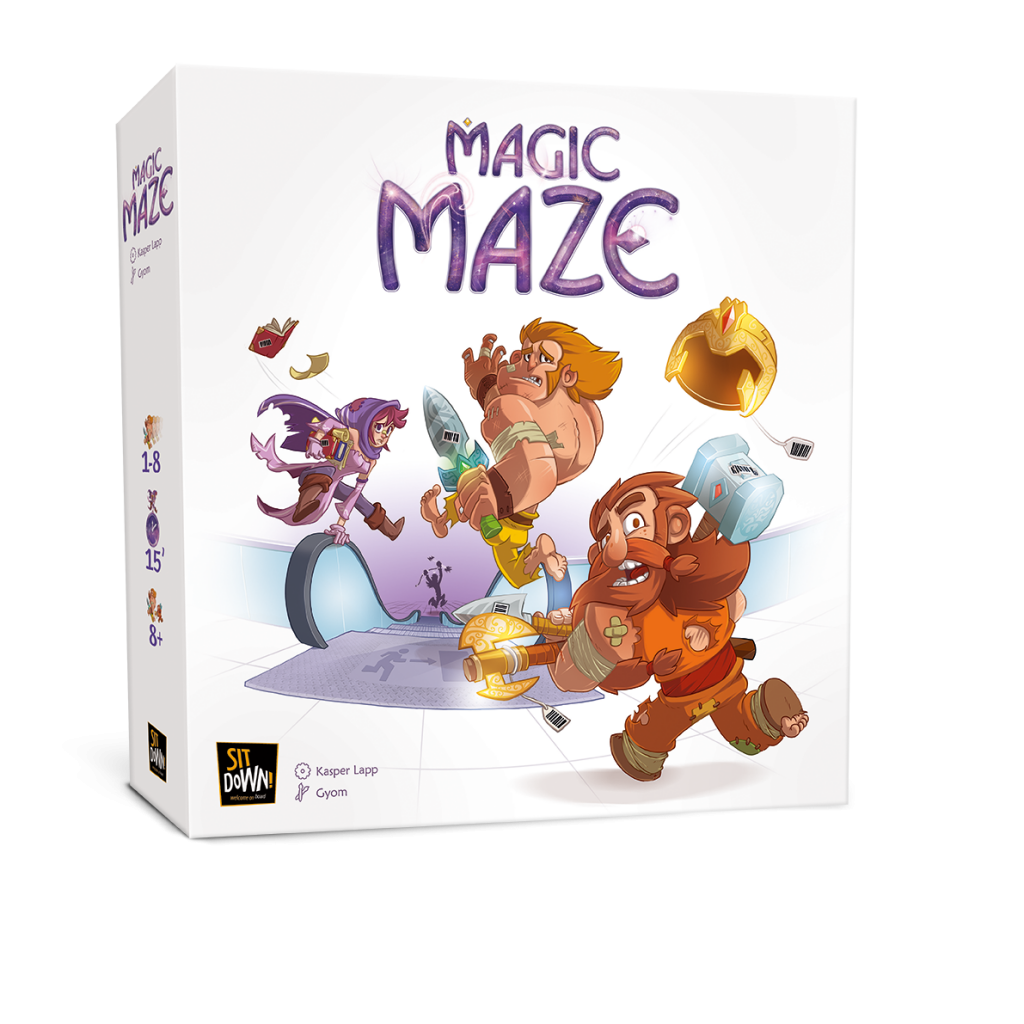 Every year when the nominees come out for the Spiel des Jahres (Family Game of the Year in Germany), there’s always a title I can’t get to playing before the winner is announced. This year it was Magic Maze, a real-time cooperative game from a publisher (Sit Down! / Dude Games) and designer (Kasper Lapp) I knew nothing about.  In Magic Maze, players play as medieval adventurers robbing a shopping mall for new equipment. However, each player controls only a few actions for all of the characters, and most of the game is actually spent in silence. Do these unique twists make Magic Maze worthy of the award? Let’s find out!

This game is cartoony and extremely humorous, but the basic premise is that players are medieval adventurers robbing a shopping mall for new equipment. Stealing is obviously bad. It’s inoffensive and silly otherwise. It’s also a game where it’s really, really easy to “cheat,” which could be an important point of discussion with younger kids. 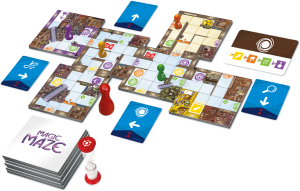 As the resident game addict and reviewer in my gaming group, I’m almost always the one teaching games. And I skip over the theme nearly every time, and my friends make fun of me for it. “You want the most victory points, you get them by acquiring cards, you get cards by…” and so on. Yet, with Magic Maze, I had no choice but to change my style. “We are adventurers who lost all our equipment, so we’re going to rob a shopping mall.” You know, because that’s where wizards and barbarians and rangers get their stuff. Not only is it a ridiculous premise—it explains the actions the players are taking. It doesn’t quite explain how players move the pawns, though, which is the other completely ridiculous aspect of the game.

In Magic Maze, players are running around in real-time, trying to find equipment and simultaneously steal it all and get out of the mall. However, each player controls part of all the pawns. For example, maybe only I can move the pawns north—any of them—and another player moves everyone east, while another player controls the escalators, and so on. Furthermore, for most of the game, players can’t talk. Why? I don’t know. The theme broke down pretty fast. Perhaps we’re all spirits guiding them on their journey, but if we talk too much they’ll realize they have no free will—whatever helps you sleep at night. These unconventional approaches to cooperative play have such high payoffs, that I’m perfectly fine with this.

First off, while I enjoy the crazy loud insanity of something like Escape: the Curse of the Temple, Magic Maze comes off with a completely different sense of humor. The fact that players can’t talk, yet are constantly needing other players to do things—yelling at someone to “DO SOMETHING!” is what the big red pawn is for—makes the game a constant bout of giggling. Fortunately, the game knows when to let it out and reel it in, so players can talk when they use spaces to flip the timer, but the timer keeps going while they talk until someone starts making moves again. This works incredibly well. It’s very tempting to “cheat” and talk, and we definitely cheated a few times by tapping specific places on the board, but overall the schtick is so amusing that it actually prompted us to keep to the rules.

And the main reason we stick to the rules is because they’re incredibly fun. This is a fast, high-intensity game for 10 or 15 minutes, and everyone is engaged the entire time. Even my friends who hated Escape: the Curse of the Temple enjoyed this, primarily because of the completely different noise level. In Escape, there’s twenty or so dice being rolled constantly, people shouting, and a soundtrack, while most of this game is played in silence. The constant engagement means there’s no downtime, but it can be exhausting for some people, so it’s still not for everyone, but it has broad appeal. It also looks great, and I’m amazed at how great the tiles function—both in terms of art design and understanding what goes where, but also mathematically how the passages always work out. My only complaint is that I wish the character pawns were uniquely shaped meeples.

Now that I’ve hopefully convinced you to play, let’s talk about where to start. While it’s awesome the game has 18 (!) scenarios, I don’t quite like how they’re laid out. Our first play of Magic Maze was with four players, and the first couple of scenarios. Don’t do that. Start on Scenario 3, because passing the action tiles to the left is a huge part of the charm of the game. It’s not silly enough or difficult enough otherwise. The other issue is that this is the kind of game that needs 5-8 people and it’s one that you’ll be constantly teaching new players, so the likelihood that you’ll ever make it through the campaigns is next to zero. If I’m going to sit down with the same friends for 90 minutes to go all the way through the campaigns, it’s more likely we’re just going to play a heavier game that demands such a large time slot instead. When I do play this with repeat players, I’ll probably be introducing new rules, two scenarios at a time, and I would never start again before scenario 3 with newbies. Regarding player count, this works fine with four, but I wouldn’t play with less than that. It’s weirdly hilarious that this game has a solo mode, given how much communication is a core part of the gameplay.

Minor gripes aside, Magic Maze is an excellent game at the very top of its genre. Its unique theme and silly rules make for immediate buy-in, it’s fast and furious and incredibly funny. I’ve never sat down and played just one game of this, and all the ten or so players I’ve introduced it to have enjoyed it. That’s the kind of game you nominate for the Spiel des Jahres, and brave to the jury for doing so.

Thank you to Dude Games for providing a review copy of Magic Maze.

Magic Maze is a unique game that generates instant interest, and it's simple, fast, and fun. It's no surprise that it was nominated for the Spiel des Jahres.