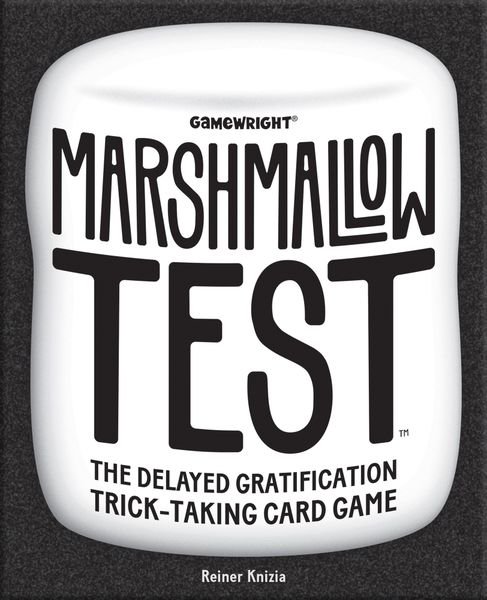 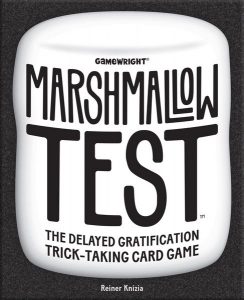 Marshmallow Test is a trick-taking game from Dr. Reiner Knizia. This new release adds a clever wrinkle to the standard trick-taking structure: players can “go out” by winning a certain number of tricks and exit the round. When a player goes out, he/she earns points based on the number of tricks won by the other players, but the last player out earns nothing! It is a quick-playing game for all ages.

The thing I love most about Reiner Knizia’s games is that they always have that one rule, that small, clever twist that completely makes the experience. Without that “Knizian rule,” most of his games would feel completely bland and generic. In true RK fashion, Marshmallow Test takes what would otherwise be a derivative game and makes it cool. 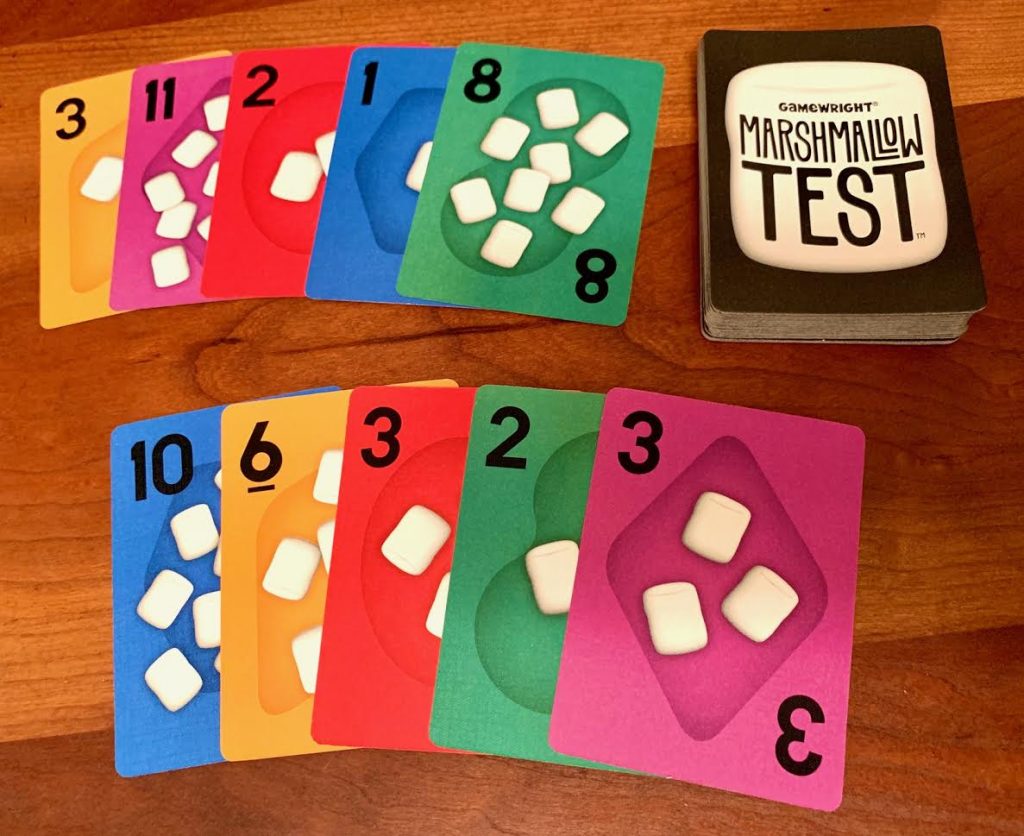 Marshmallow Test works like most trick-taking games: during each “trick,” one player lays down a card from his/her hand, and all the other players play a card in turn. The first card played sets the suit for the trick, and all subsequent cards must follow suit, if possible. In other words, if the first player played a green card, all other players must also play a green, if they are able. Only if a player has no cards of the led suit can he/she play a different suit. Once everyone has played a card, the player who played the highest card of the led suit wins the trick and starts the next one. 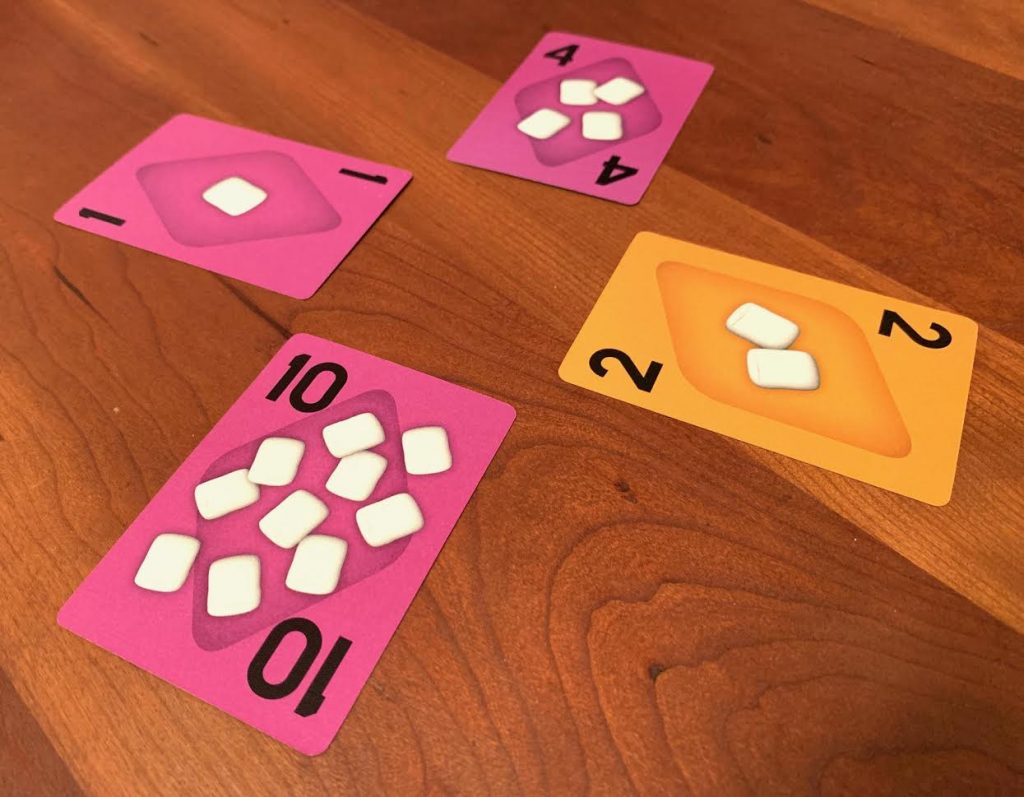 In this example, the purple 10 was led. The next two players both had purple cards, so they had to follow suit. The last player did not have a purple card, so she played a yellow 2. The purple 10 was the highest card played of the led suit, so this player wins the trick.

Like many trick-taking games, Marshmallow Test uses a trump suit, but in a break from the norm, it is not introduced until part-way through the game. After the first round of tricks is complete, whenever players are dealt a new hand of cards, the dealer selects a color to be the trump suit for that round. As usual, the trump suit can only be played if a player cannot otherwise follow the led suit, but any trump card beats any non-trump card.

The real twist in this game – the Knizian rule that makes it interesting – involves the way players score points. When a player wins a certain number of tricks (scaled according to the number of players), he/she “goes out” and exits the round. At this time, he/she scores points equal to the number of tricks that all other players have won so far this round.

As an example, suppose a player has just gone out, and her opponents have won 2, 2, and 3 tricks, respectively. She would earn 7 points, the sum of their current scores. Points are represented by squishy foam marshmallows, in values of 1 and 5. 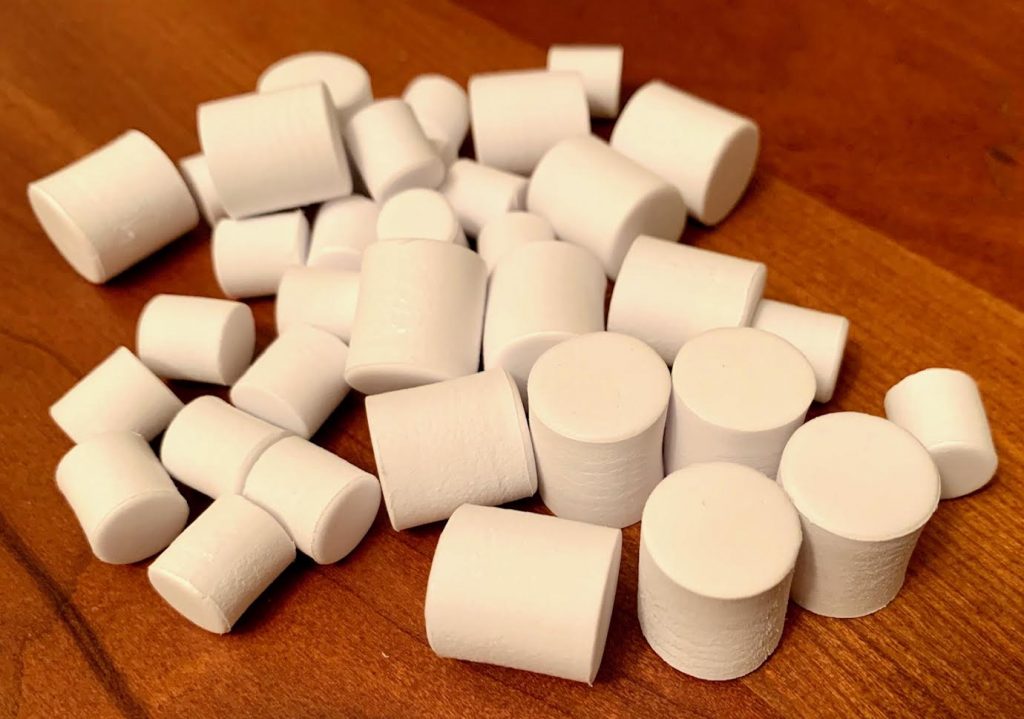 (I learned the hard way that they don’t taste good.)

However, in true Knizian fashion, there is a catch. When the second-to-last player goes out, leaving only one player in the round, the round ends and the remaining player earns nothing. This means players want to wait as long as they can to go out to maximize the number of points they will receive, but not so long that they wind up with nothing. It’s a clever push-and-pull.

When a player earns 20 points, the game immediately ends and that player wins!

Marshmallow Test is classic Reiner Knizia; it takes a simple, recognizable game system and adds a single twist that differentiates it from the rest. The notion of scoring based on what other people have fits right alongside other “Knizian rules” like the highest-lowest score (as in Tigris & Euphrates and Ingenious) or scoring based on cards that were not played (as in Bucket Brigade). I have never seen a trick-taking game in which players can exit the round, and I find that whole notion clever and interesting.

This game looks great. The marshmallows steal the show; they are simply delightful. They could have easily been cardboard tokens, but the fact that they look and feel like actual marshmallows makes them ten times more fun. I guarantee players will want to squish them.

There is one slight component issue, however. Though the card colors are incredibly easy for most to differentiate, they do not have their colors written out on them to accommodate color-blind players. This seems like a missed opportunity, as it would have been easy to include a single word on each card, and it would not have raised the production cost.

That said, I enjoyed this game. Trick-taking games like Wizard, The Dwarf King, and The Crew: The Quest for Planet Nine build on the standard trick-taking formula, and each produces a unique and fun experience. Marshmallow Test does this once again. The twist of wanting to wait to go out – but not waiting too long – almost gives it a push-your-luck feel. Since each trick a player doesn’t win is essentially one potential point for when he/she goes out, there is an interesting meta-game at play. For example, when a player is close to going out, he/she might intentionally lose a few tricks to sock away extra points. It’s interesting.

This is a cool game. Fans of trick-taking (like myself), as well as fans of Reiner Knizia (also like myself) will definitely want to check it out.

Marshmallow Test is perfectly Knizian - a simple game with a single twist that completely makes the experience. Good fun, with an interesting meta-game. Recommended especially for fans of Reiner Knizia and/or trick-taking.