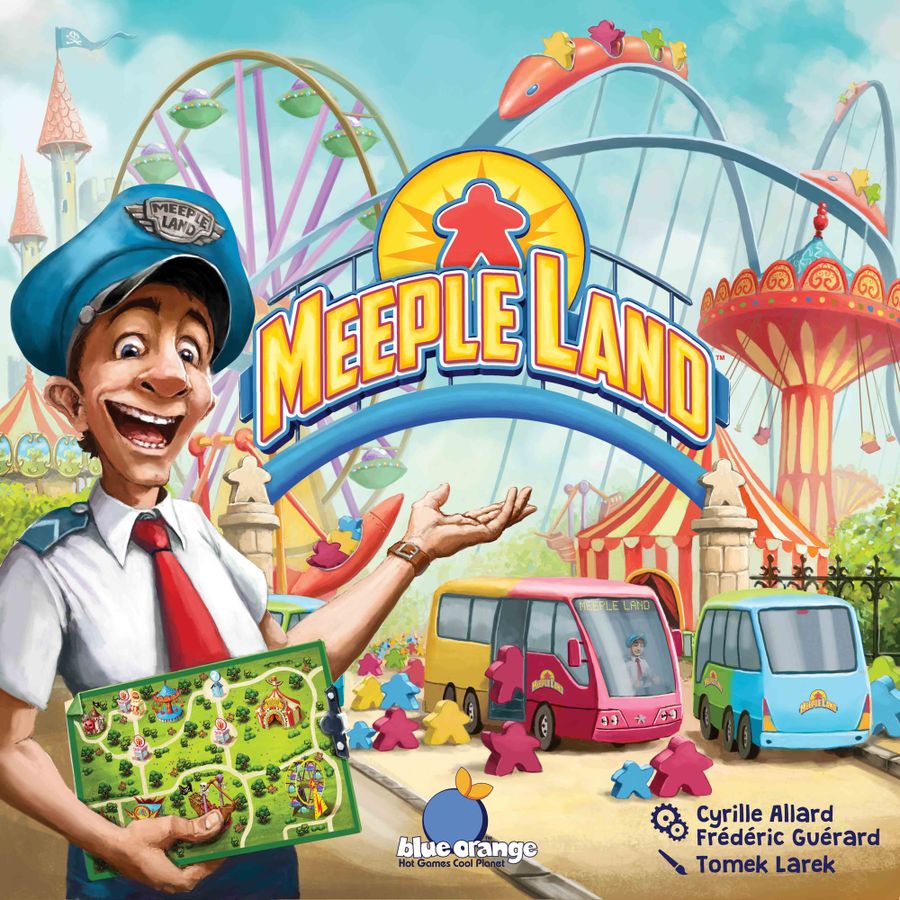 Meeple Land is one of Blue Orange Games’ big releases for 2020 (a would-be Gen Con release, if I’m not mistaken). In this game, 2-4 players compete to build the most awesome amusement park by purchasing tiles, placing them strategically, and getting patrons to come visit. It is simple enough that groups of mixed ages and experience levels can play together, but it has enough strategy to keep gamers interested as well.

In Meeple Land, each player begins with an empty plot of land which they try to turn into the best (read: most profitable) amusement park. The game is played over 4 rounds, and at the end of the 4th round, the player with the most points wins. 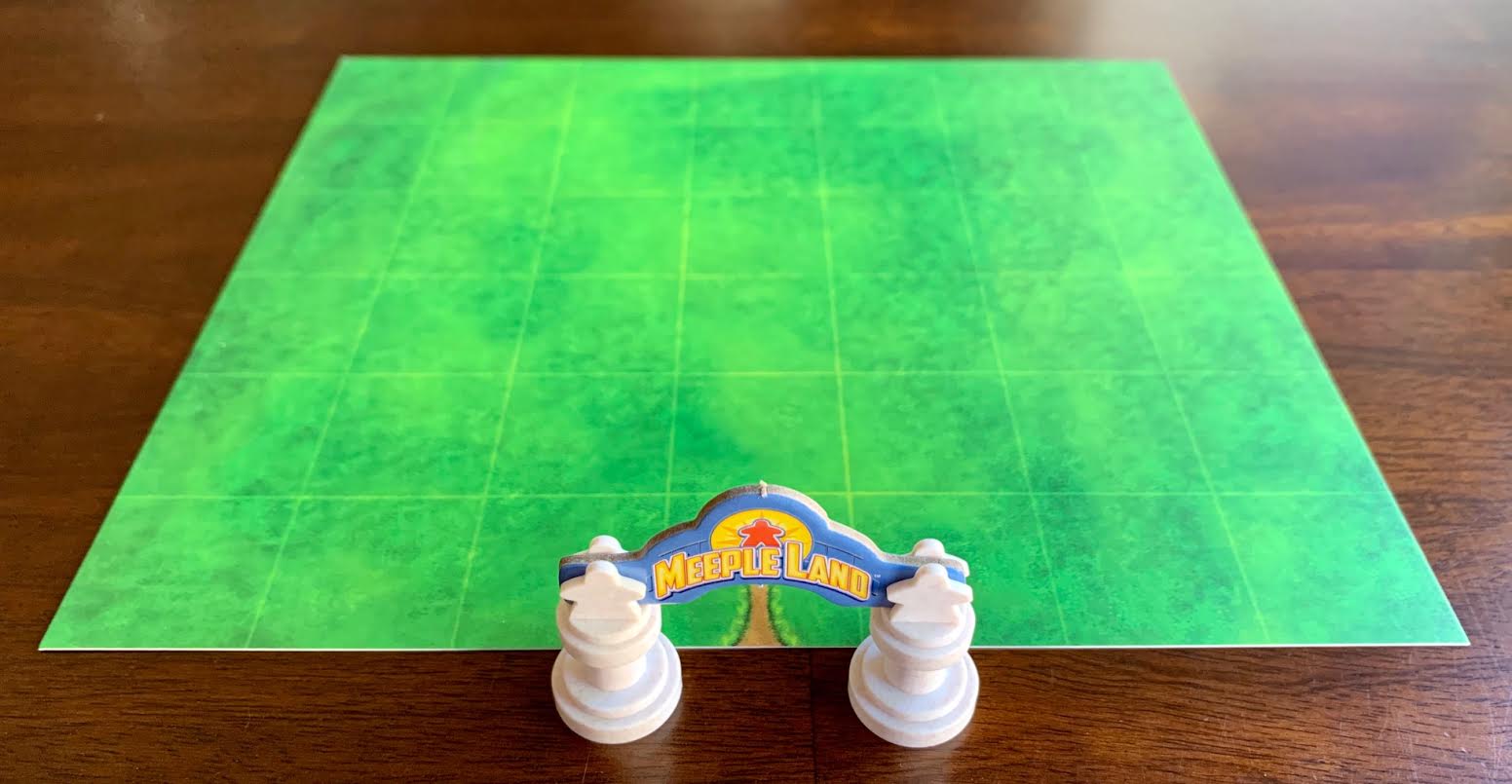 The entrance archway is a nice touch.

At the start of each round, players receive income. Then, they take turns performing actions until everyone has passed. Actions involve purchasing tiles, which come in 3 sizes, and are splayed out in a central market. 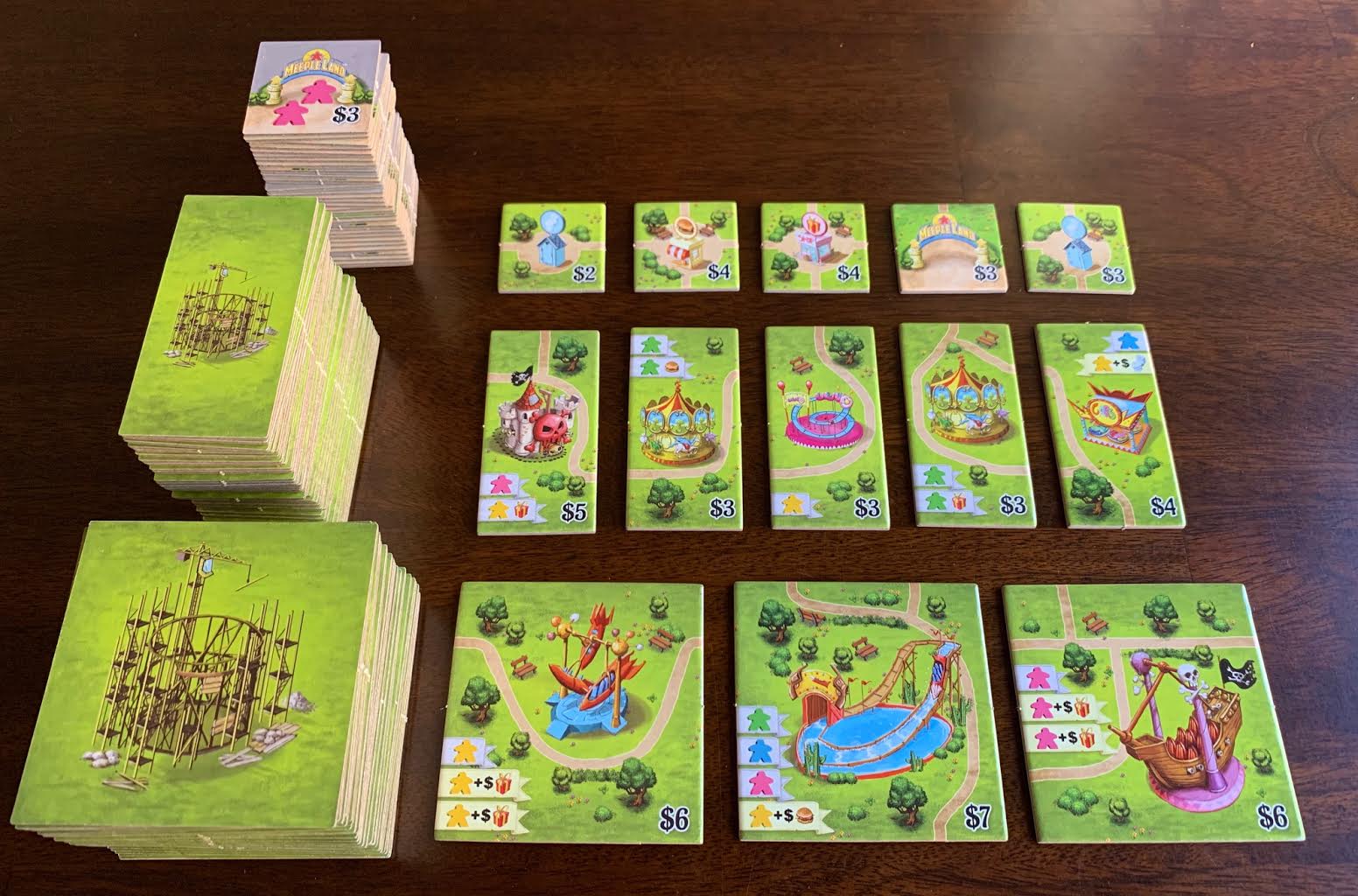 This game has a ton of tiles.

Tiles show park features like rides and services, and each one has a listed cost to purchase. Ride tiles attract visitors (more on this later) and services help to boost the profitability of rides.

When placing a new tile, it must connect to at least 1 other tile, and at least 1 of its paths has to line up. Other paths may come to dead ends, but each one that does reduces its owner’s end-game score. 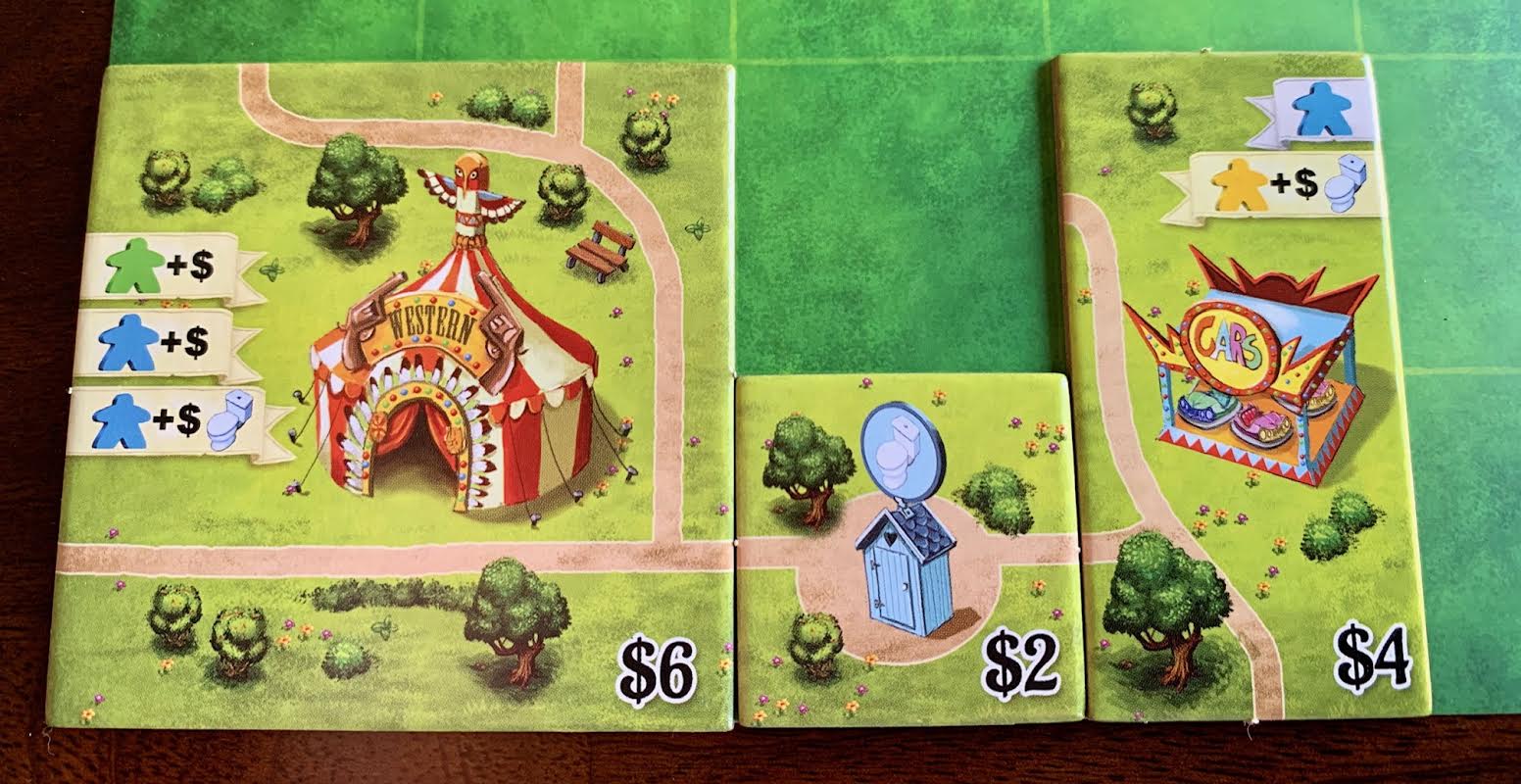 Notice that the two larger tiles each show a restroom icon on their lower banner. This means that they are more valuable if directly connected to a restroom (which, in this example, they both are). Other rides might want to connect to a restaurant or gift shop, instead.

This brings up the topic of visitors. When a player decides to pass, he/she sits out the remainder of the round and immediately takes a bus card from the central tableau. 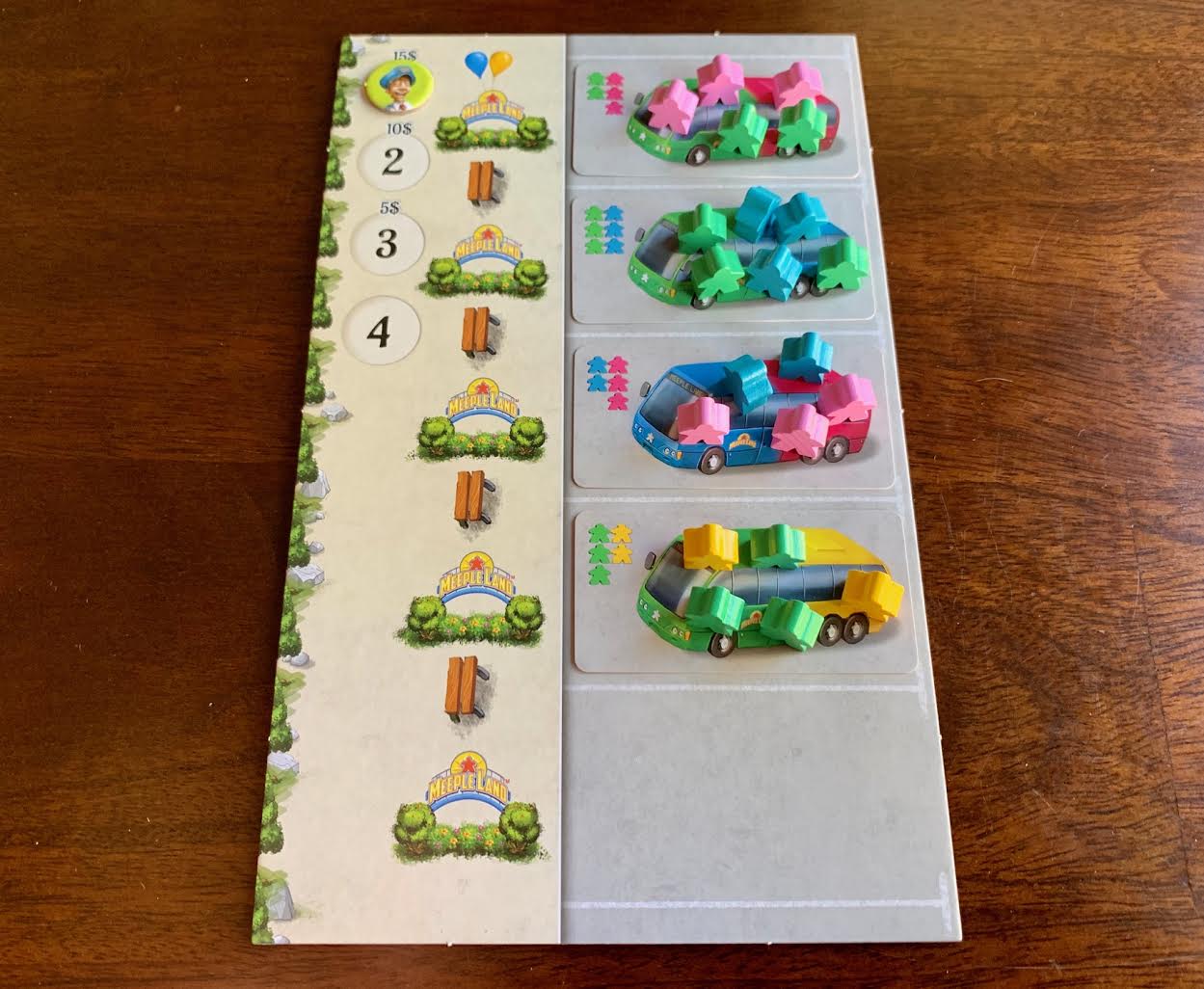 Every bus comes with a group of meeples in 2 colors. When a player claims a bus, the meeples onboard enter the player’s park if they are able. Each ride shows certain meeples that it attracts, and players may place matching pieces on those rides. Sometimes, a meeple will only visit a ride if a particular service is connected (such as the restroom in the earlier example). If it is, the meeple can go there and the player will earn an extra monetary bonus. 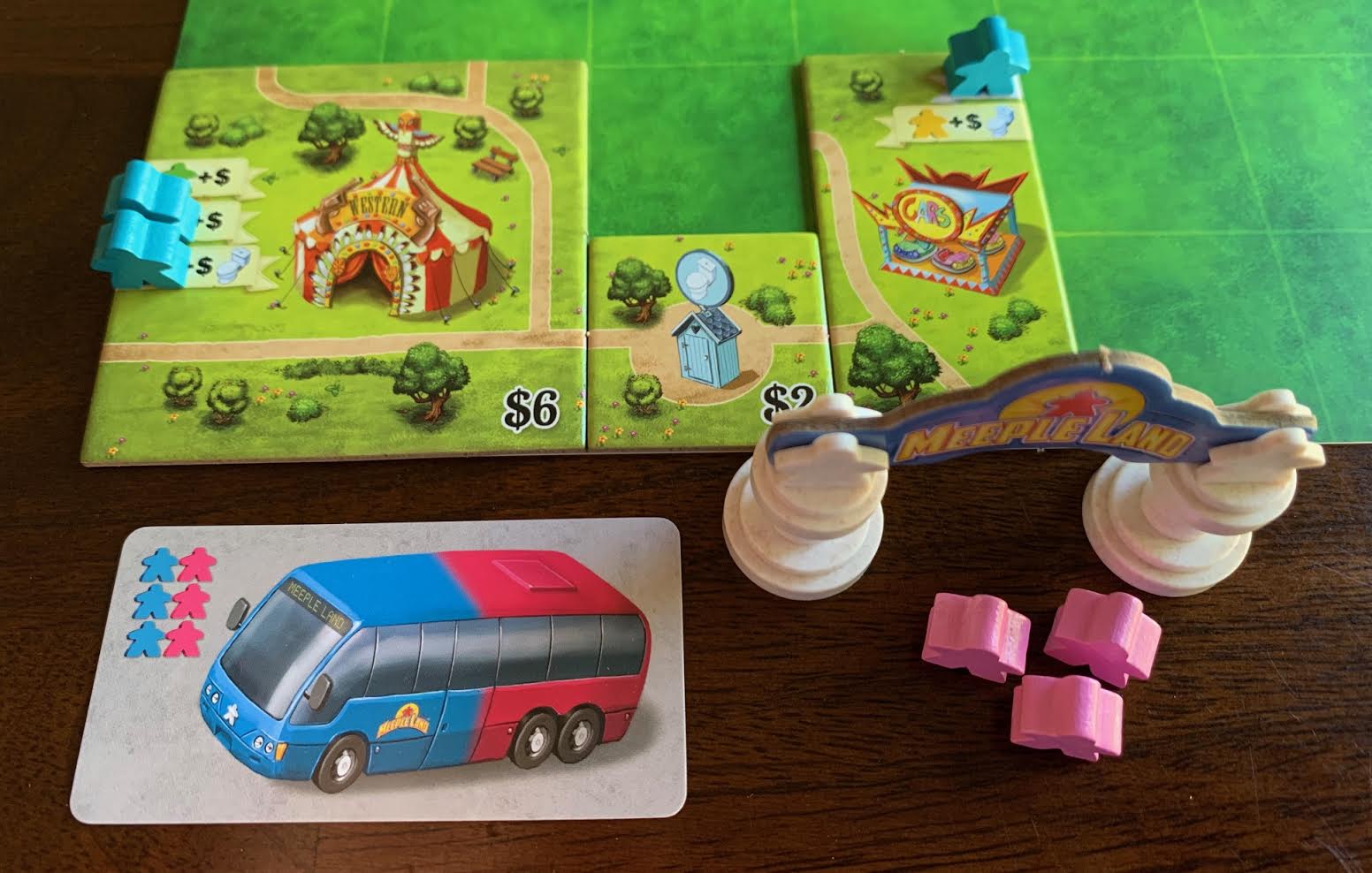 This player has no spots for pink meeples, so the visitors have to wait at the gate until pink spots become available.

Instead of adding a tile to their tableau, a player may instead advertise. To do this, they take the top tile from the 1×1 stack (without flipping it over), pay its cost, and place the indicated meeples either in their park or at the entrance. 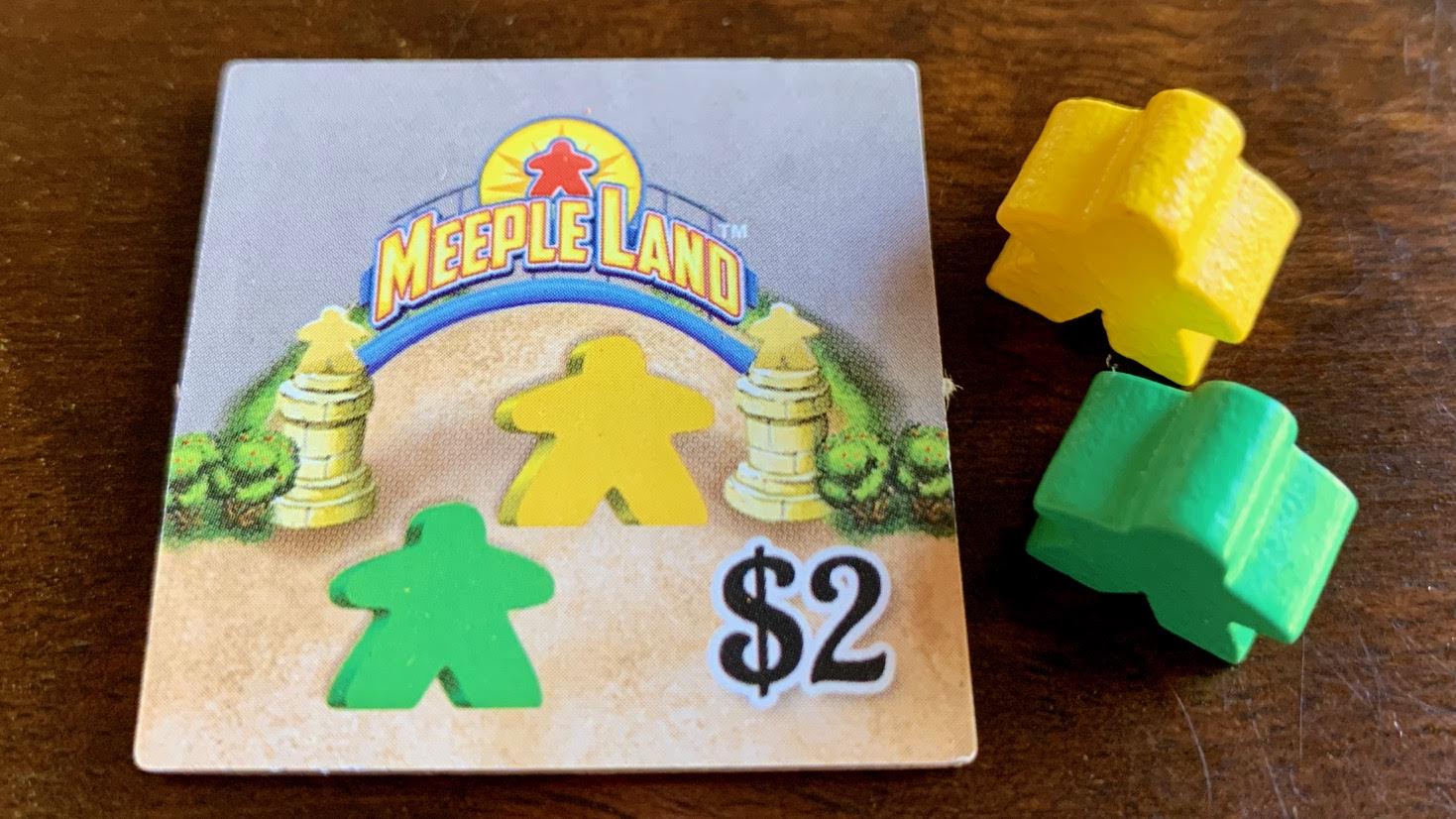 At the end of each round, players receive $1 per meeple in their park, plus $1 extra for each occupied space with a required service connected.

The game ends after 4 rounds. At that time, players count up the different types of attractions in their parks; the more unique rides a player has, the more points they will score. Additionally, each meeple in the park scores 1 or 2 points, depending upon its color. Any dead ends in the park or meeples left at the entrance subtract from the player’s overall score. The player with the most points wins!

I was pleasantly surprised when I tried Meeple Land. It is yet another strong family game offering from Blue Orange, following in the footsteps of Kingdomino, Photosynthesis, and Cloud City. While the title and goofy-looking box cover character do not inspire confidence, this game is actually an enjoyable experience with echoes of Barenpark and Roller Coaster Tycoon.

The tile-laying puzzle is not brain-burning, but it asks players to plan ahead spatially. It has an interesting give-and-take in which players want to stay in the round as long as it takes to maximize their productivity, but not so long that they fail to get a bus with the meeples they need. Again, the decision space is not terribly deep, but it is enough to make players stop and think about what they’re doing. (Also, I didn’t mention this before, but players can purchase a smaller, secondary board to extend their park.)

The game looks nice on the table, with vibrant colors and fun pictures. The only issue I have with the production quality is the box insert – it holds the components, but not in any logical way. It would have been nice to have had designated slots for the different tiles, archway pieces, etc.

Overall, though, Meeple Land is another fun offering from Blue Orange. It’s a good choice for families, but it has enough “oomph” to keep gamers engaged, as well.

Meeple Land is another fun offering from Blue Orange. It's a good choice for families, but it has enough "oomph" to keep gamers interested, as well.