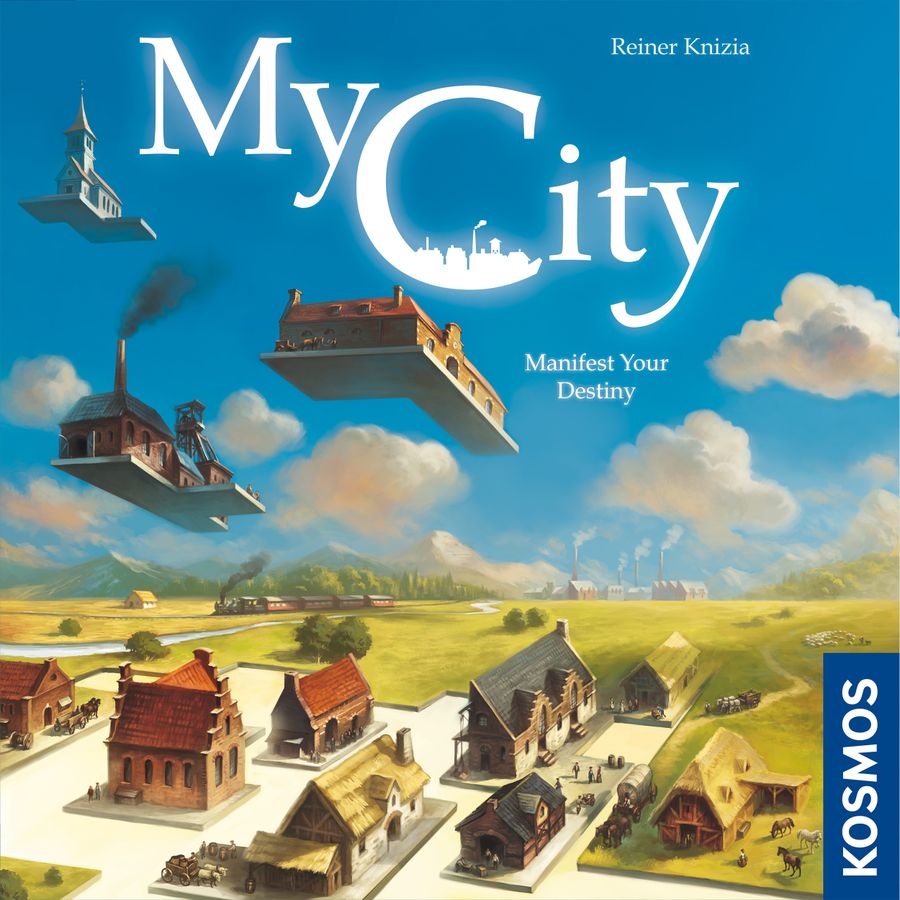 My City is a legacy game from the renowned Dr. Reiner Knizia, whose design credits include such classics as Ra, Lost Cities, The Quest for El Dorado, Through the Desert, and about ten thousand other games. Like many legacy-style titles, My City uses a simple formula (in this case, a polyominoes tile-laying system), and progressively builds on it over an entire campaign.

My City caught my attention for a number of reasons. First, it is a Reiner Knizia design; second, it is a legacy game, something Knizia has not yet tried; and third, it was nominated for this year’s Spiel des Jahres award. With all this in mind, I couldn’t wait to dig into it.

My City is played over 8 rounds of 3 games each, a total of 24 “episodes.” A single episode usually lasts about a half hour, so it is easy to blast through several in an evening.

The goal of each game is to earn the most points, something players accomplish by strategically placing their building tiles to maximize their score. As with any legacy game, the rules change over time. I want to avoid spoilers if possible, so I am going to limit my discussion mostly to the first episode. However, as anyone who has played a legacy game would expect, there is much more to be discovered throughout the campaign.

In this game, each player has their own set of polyomino building tiles and a personal tableau board. In the central play area is a deck of cards corresponding to the building tiles.

Turns are taken simultaneously. Each turn, the top card is revealed, and all players may place the matching tile on their board. The first building played must be placed alongside the river, and every successive building must touch an existing building. Tiles may not be placed on mountain or forest spaces, but must instead be placed on the light green “field” spaces that make up the majority of the board. 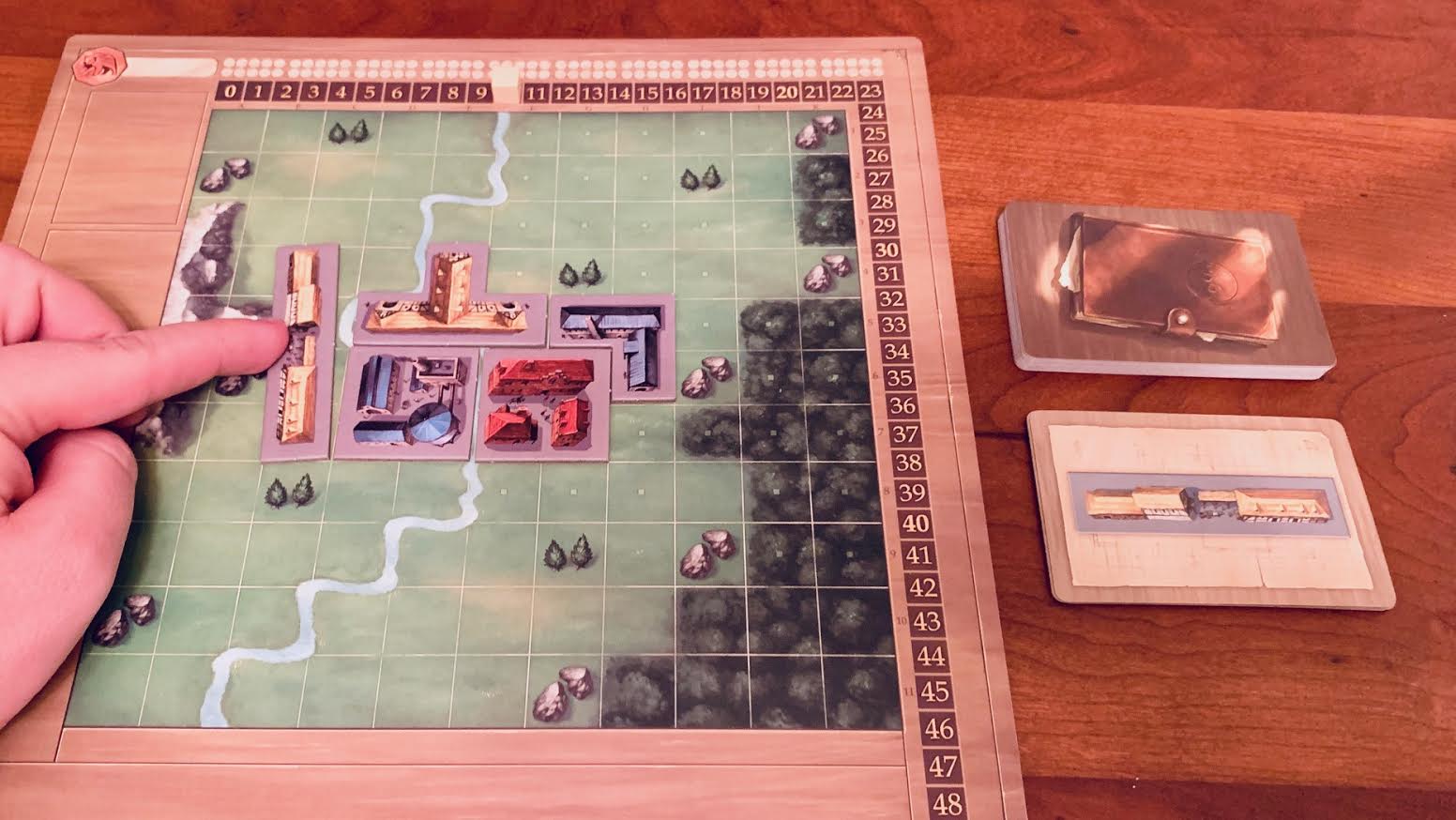 After a few turns, players’ tableaus will look something like this.

Sometimes it will happen that a player cannot or does not wish to place a tile. When this occurs, the player may pass for that turn, discarding the tile and moving 1 point back on the scoring track. (Each player’s score begins at 10, by the way.) If, prior to the deck being depleted, a player is satisfied with their tableau and wishes to stop building altogether, they may choose to exit the round, suffering no further penalties.

When either all players have exited the round or the deck has been exhausted, the game ends and scores are tallied. Each tree showing on a field space earns its owner 1 point, and each rock or empty green space deducts 1 point. This means that during the game, players want to try to cover rocks and empty spaces, but leave trees visible. (This might sound easy, but in practice it can be quite challenging.)

Depending upon the number of players, 1 or 2 people will earn “progress” marks for having the most or second most points. Progress is tracked using the blank circles at the top of each board; filling in these circles is really the ultimate goal of the entire campaign. At the end of the final episode, the person who has filled in the most progress circles is considered the overall winner of My City. Additionally, at the end of each episode, players may earn stickers that are used to modify their boards for future games. 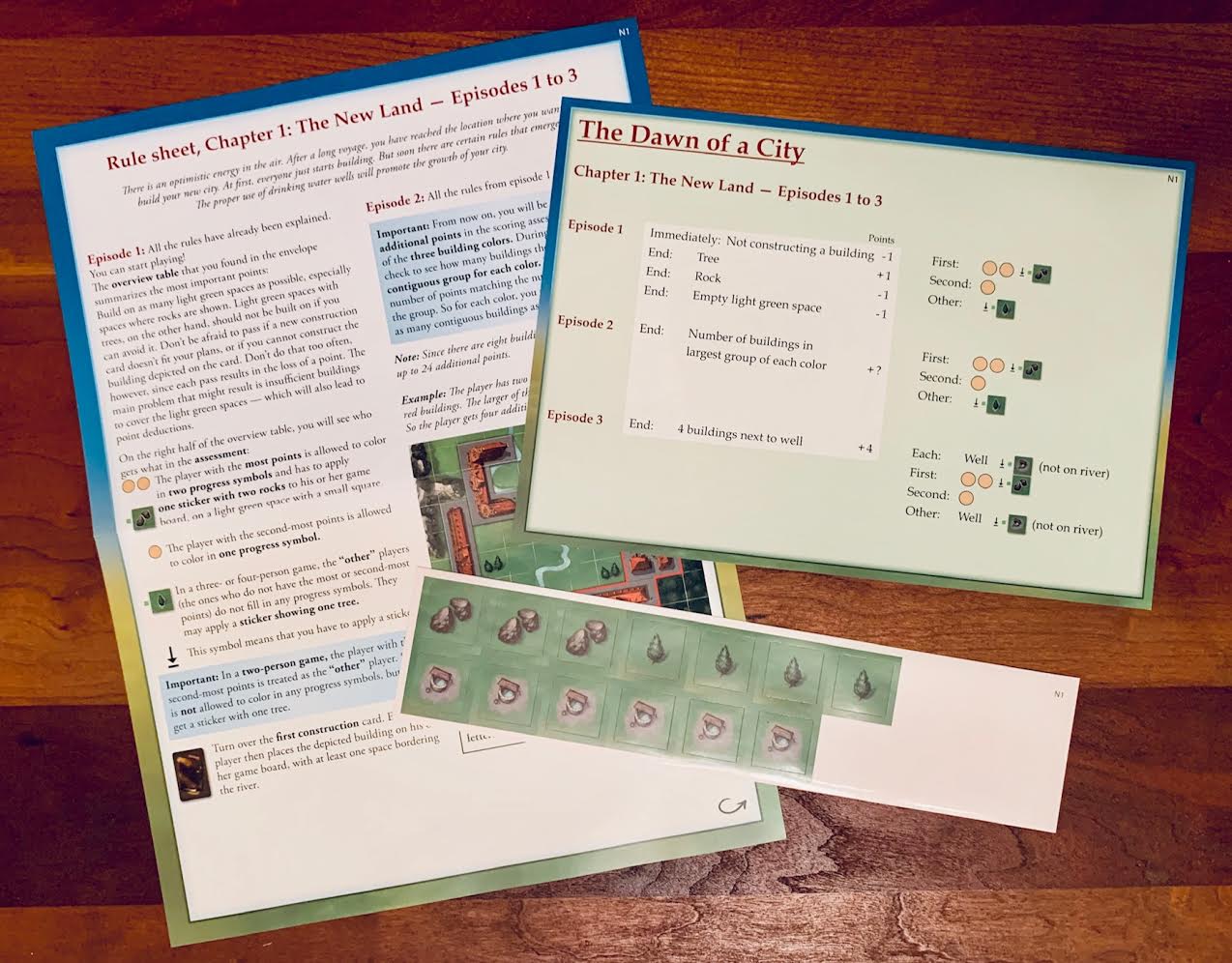 Showing the contents of the first envelope is as spoiler-y as I’m going to get. (As a side note, to make sure all the stickers were in this photo, I took it before I began the campaign.)

Long before My City was released, I wondered what a hypothetical Reiner Knizia legacy game would be like. How would his trademark style of classic simplicity fare in a new-age genre based on emergent gameplay?

As it turns out, very well.

My City is quite simple to play, especially compared to other legacy games. Its entire system is built on the mechanism of “flip a card, place a building,” which feels perfectly Knizian. Sometimes, legacy games get bogged down by a plethora of changes, and trying to keep track of a bunch of added rules can feel frustrating. Happily, this is not the case with My City. Of course, new rules do get added to this game as time goes on, but the experience always maintains its core simplicity. (I should also note that the rulebook includes directions for post-campaign play using the reverse side of the boards.)

Admittedly, the simplicity of this game comes at the cost of a strong narrative. In terms of storyline, My City is a far cry from grandiose epics like Gloomhaven and Pandemic Legacy, but it isn’t remotely trying to be like those games. Reiner Knizia’s fame did not come from games with intense thematic immersion – the very notion of a thematic Knizia game almost makes me laugh. Rather, his fame came from tightly designed games that do a lot with a little, and that’s exactly what My City is.

This game is definitely worth checking out.

Reiner Knizia has managed to combine his classic design style with the emergent gameplay of the legacy genre. My City is definitely worth checking out.