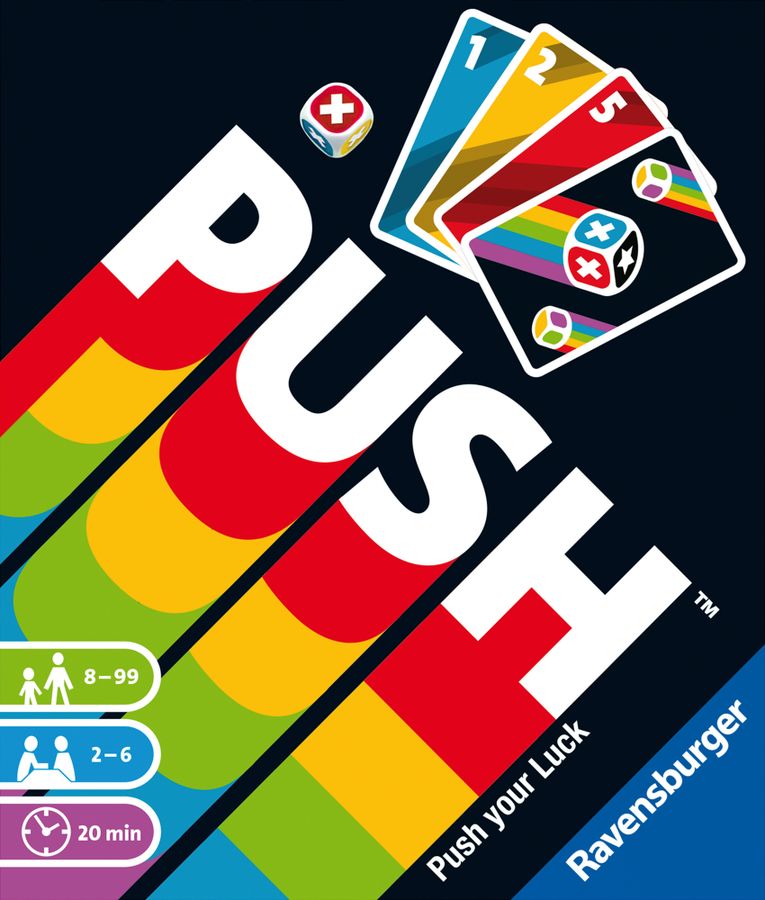 PUSH is a small card game of risk-taking. In this game, players flip cards from a deck and place them into 3 columns. They may continue flipping cards as long as they wish, but if they are ever unable to place a card, they bust and lose their progress! With a simple ruleset and a quick playtime, it is a good choice for all ages.

As its name suggests, PUSH is a push-your-luck game, a game where players can perform an action as many times as they wish, but every time they do, their risk increases.

The goal of the game is to earn the most points – players earn points by collecting numbered cards. The components are fairly minimal, just a single deck and a single die. 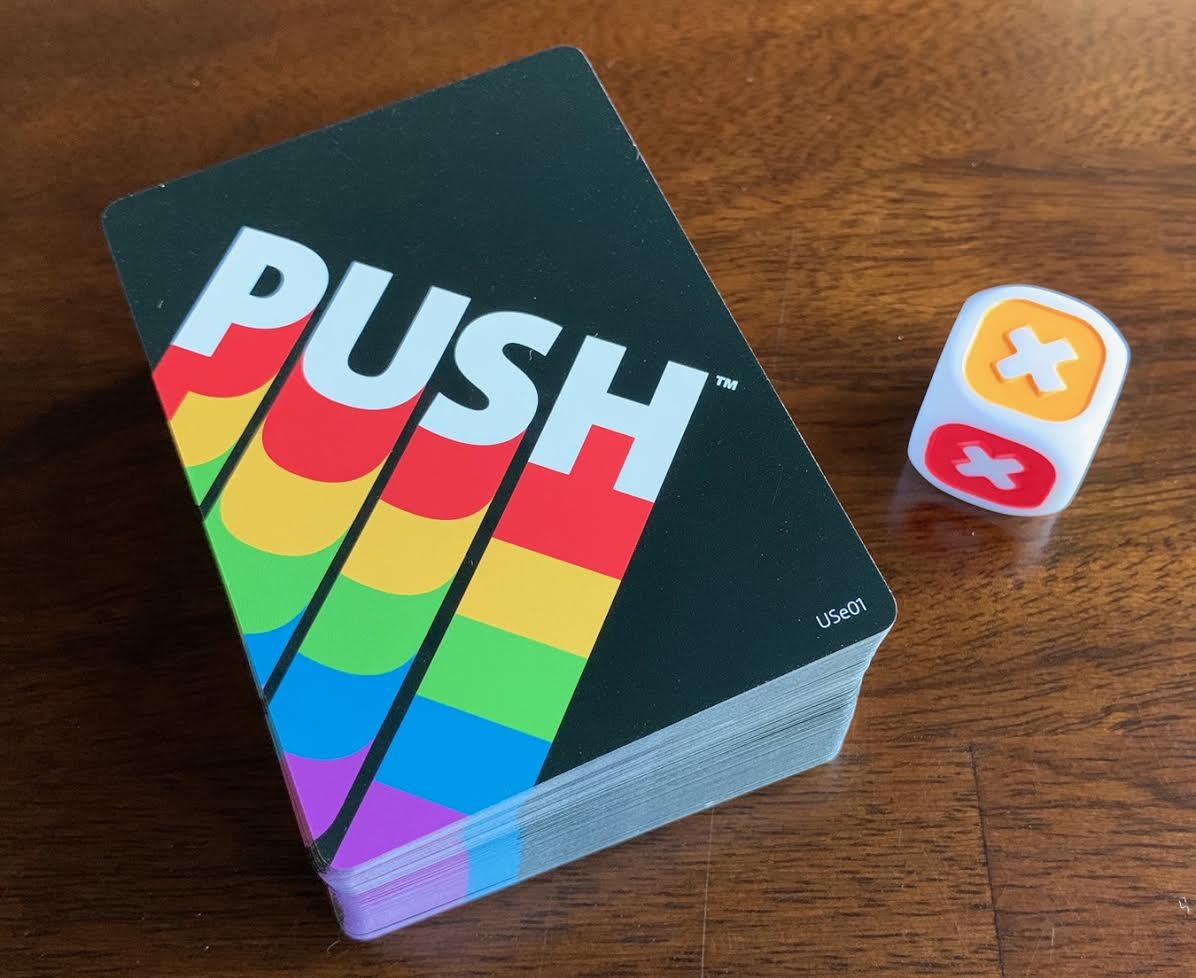 Each turn, the active player reveals the top card of the deck and places it in the center, beginning a column of cards. The player may then reveal another card, then another, and continue revealing cards as long as they like.

As cards are revealed, they are placed in up to 3 columns. 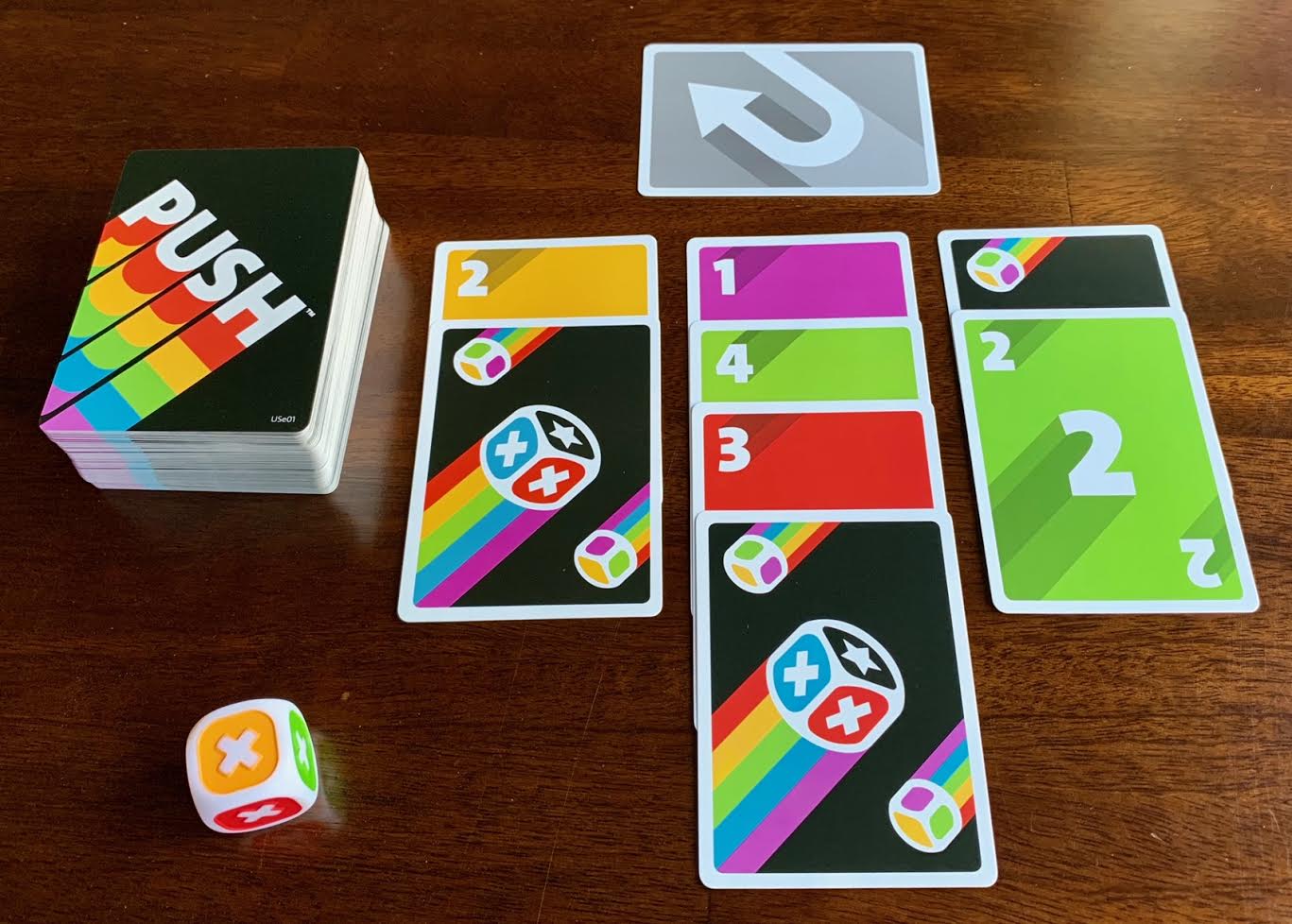 No column may have a repeated color or number. That means that in this situation… 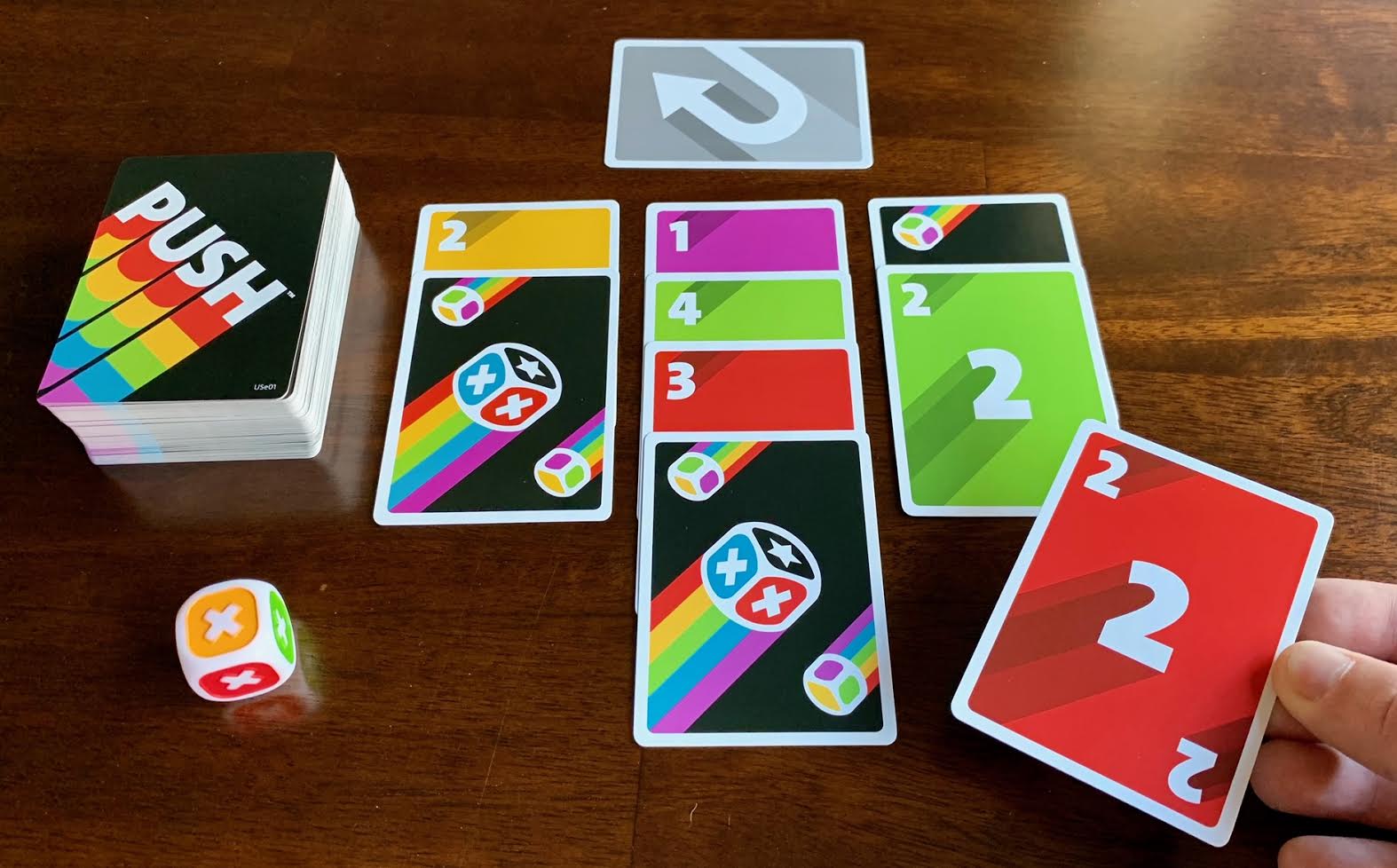 …the player would bust and their turn would end. Whether the player stopped or busted, the 3 columns of cards get divvied out among players. If the active player stopped without busting, they take the column of their choice and place the cards into their “bench” area. Then, one of their neighbors gets to choose a stack, and then one of that player’s neighbors chooses the last stack. The drafting direction – right or left – depends upon any “reverse” cards that were drawn.

An example of a player’s bench.

Though cards in a player’s bench are in their possession, they can still be lost. Anytime a player either busts or collects a card showing the die icon, that player rolls the die and loses all cards of the resulting color from their bench (e.g. Lose all green cards on a roll of green). The die has 1 “safe” side, which causes no loss.

To permanently bank cards and secure their points, a player may skip their turn to flip an entire column from their bench face-down. These cards are then locked and can no longer be lost.

The game continues in this fashion until the deck runs out. At that time, players add up the values of all the cards in their bank and bench; this total is their final score. The player with the highest score wins!

PUSH does just what it sets out to do: provide a rules-light experience that tests players’ willpower and hubris. As is the case with many push-your-luck titles, the fun of this game comes from goading other players on, saying “Come on, draw another card, I dare you!” (If you’ve played games like Incan Gold or Can’t Stop, you’ll understand.)

This game has a very “mass-market” look to it, which in this case works in its favor. It actually looks quite a lot like UNO, with number/color cards and reverse cards; heck, even the game logo looks like the old-school UNO logo. Given how accessible its gameplay is, I think this helps to establish PUSH as a game for all.

There isn’t much to say about the component quality of PUSH since it’s just cards and a die, but it does have one significant issue: the hard-plastic clamshell it comes in. It is very poorly designed and it falls open easily, so a rubber band is necessary to prevent cards from exploding everywhere. A sliding lid would have been much better.

Overall, though, PUSH is a fun time. It’s not quite on the level of Can’t Stop and Incan Gold, but it’s still worth a try.

PUSH isn't quite on the level of classics like Can't Stop and Incan Gold, but it's a fun time nonetheless.