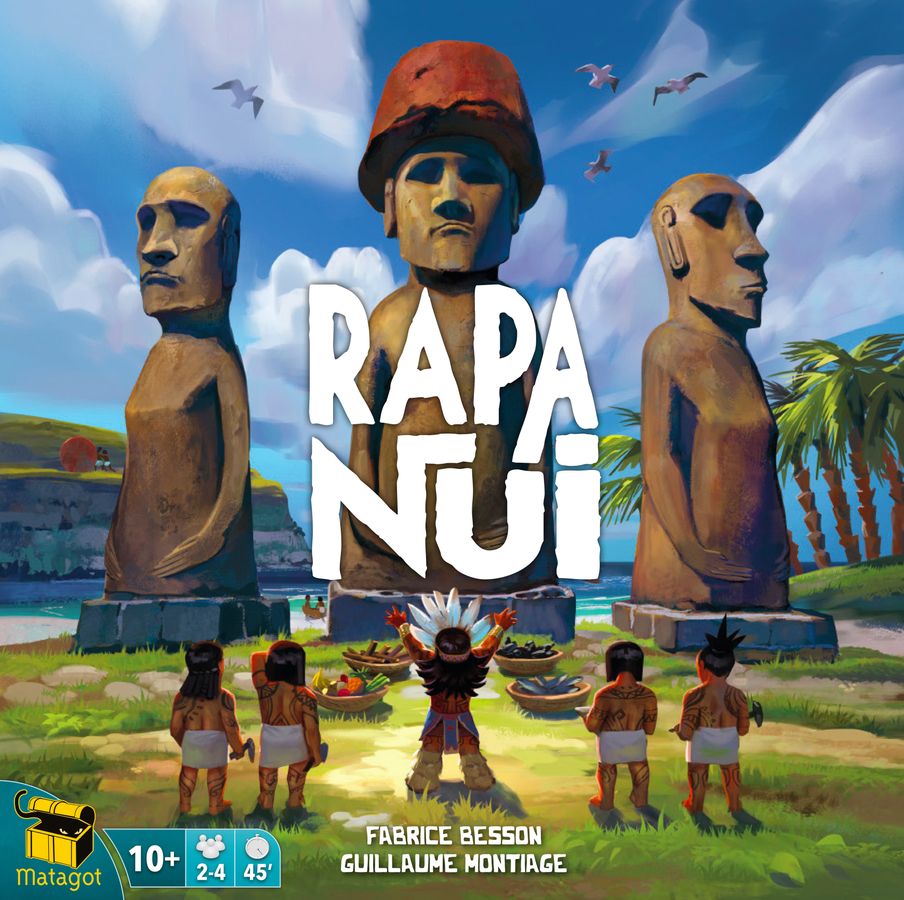 Rapa Nui is a reworking of the 2008 game Giants, a fairly obscure title that never generated much buzz. 13 years after its original release, this game is returning in a brand-new version. How does the design hold up today? Read on!

I had the chance to play Giants waaaay back in 2011, a time when Asmodee was a small publisher and Kickstarting games was a brand-new concept. Though I only played it a handful of times, I always remembered enjoying the experience. (I also remembered the production quality being off the charts.)

Given how Giants never left an impression on the collective gamer consciousness, I was pleasantly surprised to see it returning as Rapa Nui and excited to revisit it after a decade.

In Rapa Nui, players are Polynesian artisans crafting the famous Moai figures. The game is played on a central board representing the island of Rapa Nui. 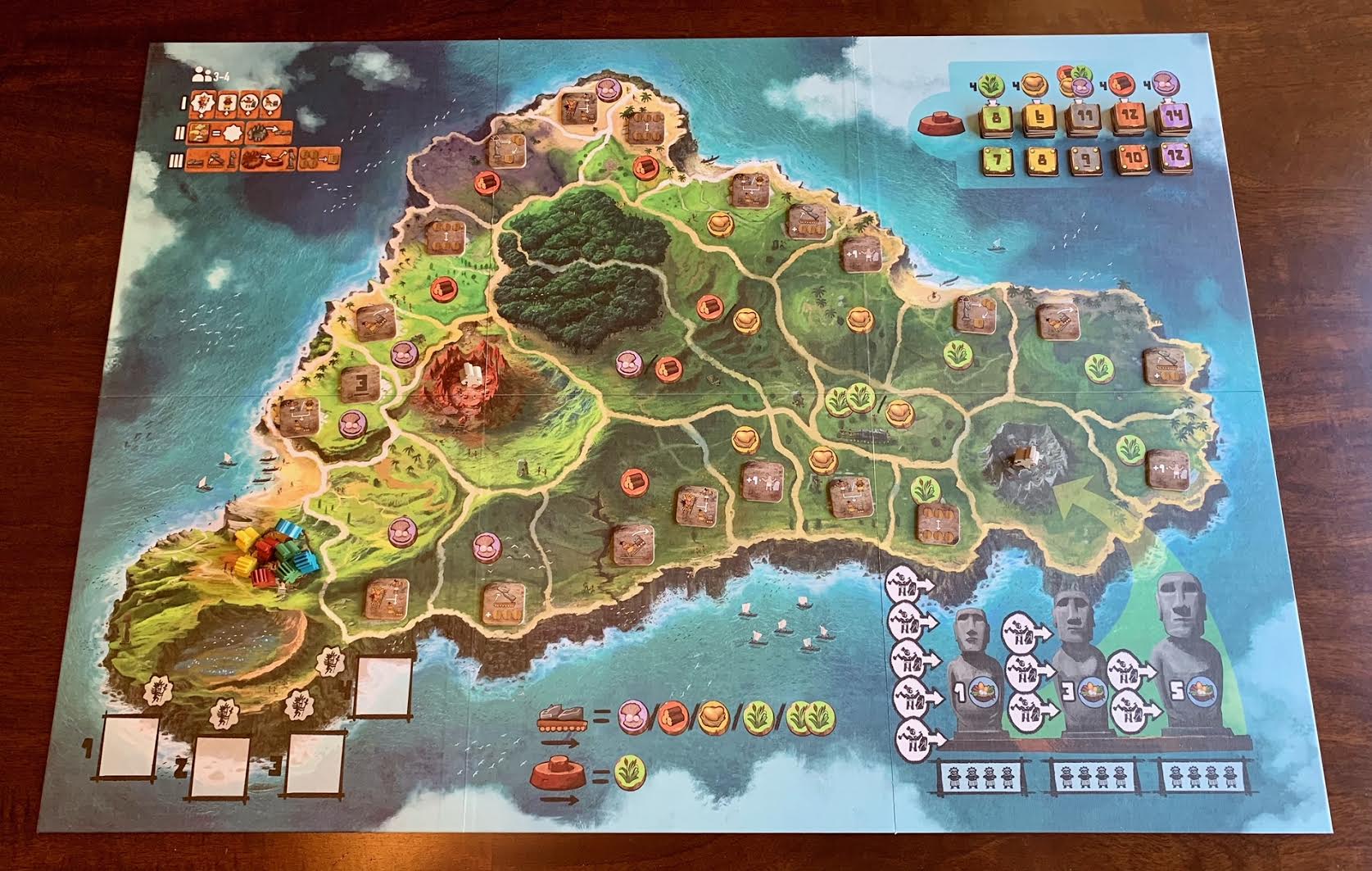 Aside from this main board, each player also manages a personal tableau which tracks their resources. 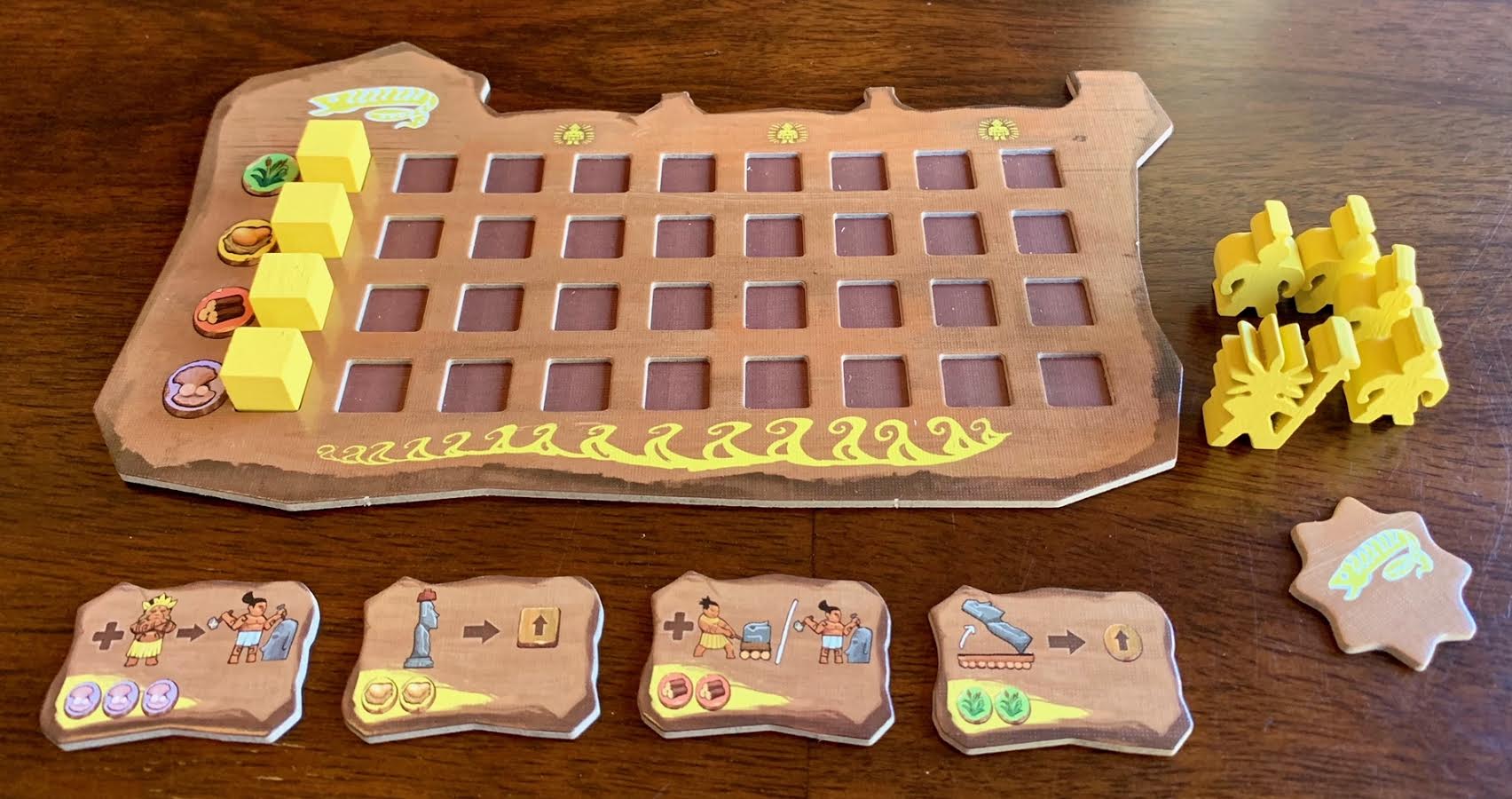 The goal of the game is to earn the most points. The round structure is divided into 3 phases:

During the first phase, players place their workers on the Moai quarry and/or the island spaces. The Moai come in 3 sizes; the larger they are, the more workers they cost to construct (1, 2, or 3 for small, medium, or large, Moai, respectively). 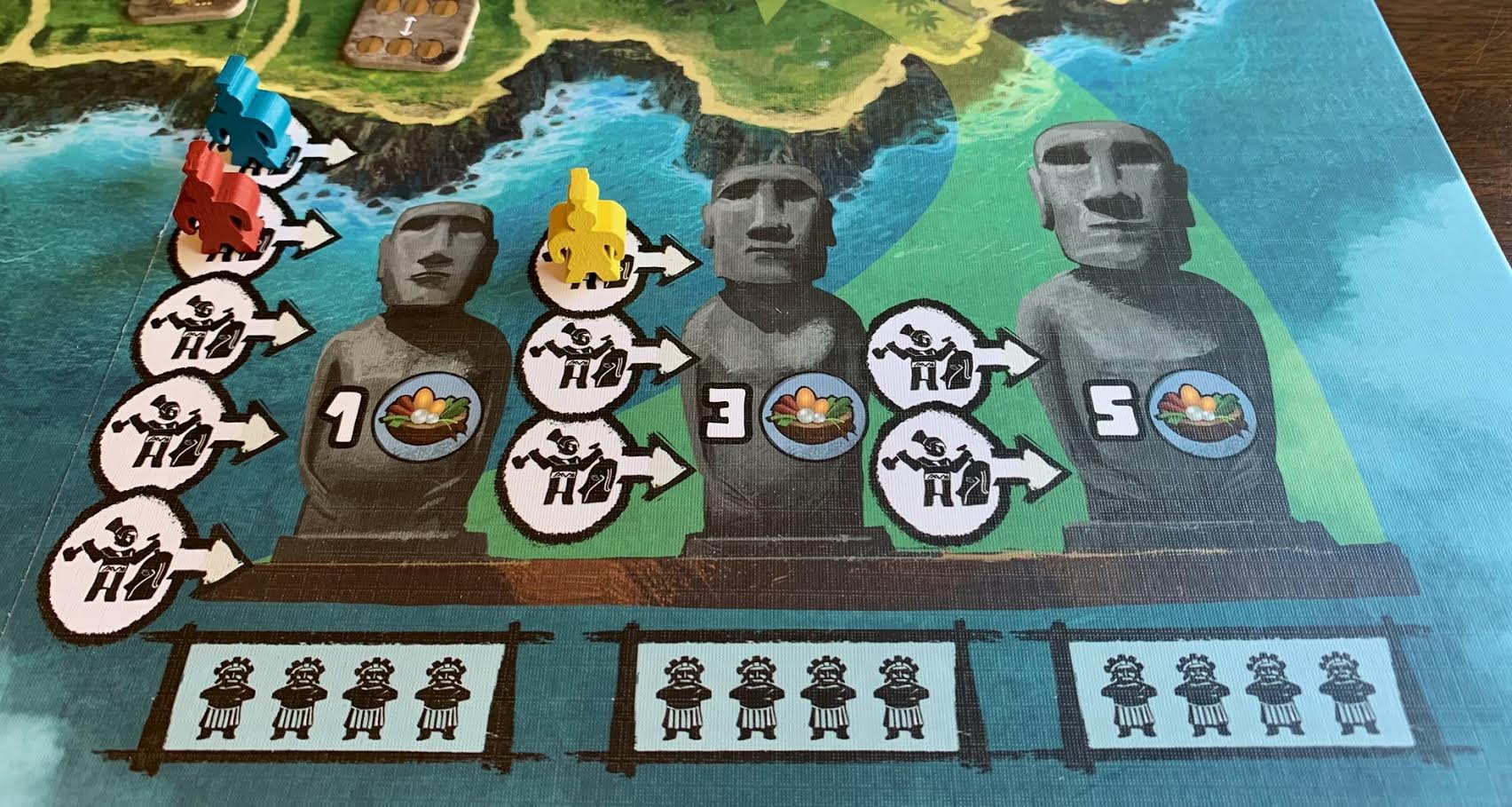 Workers added to the island spaces are used to transport the completed Moai and Pukao to their destinations around the edge of the island. In order to move a Moai/Pukao, there must be a continuous line of workers between the space where the piece originates (the Quarry or Crater) and its final resting place. It does not matter who owns the workers in this line, but opposing players receive a bonus when their workers are used. 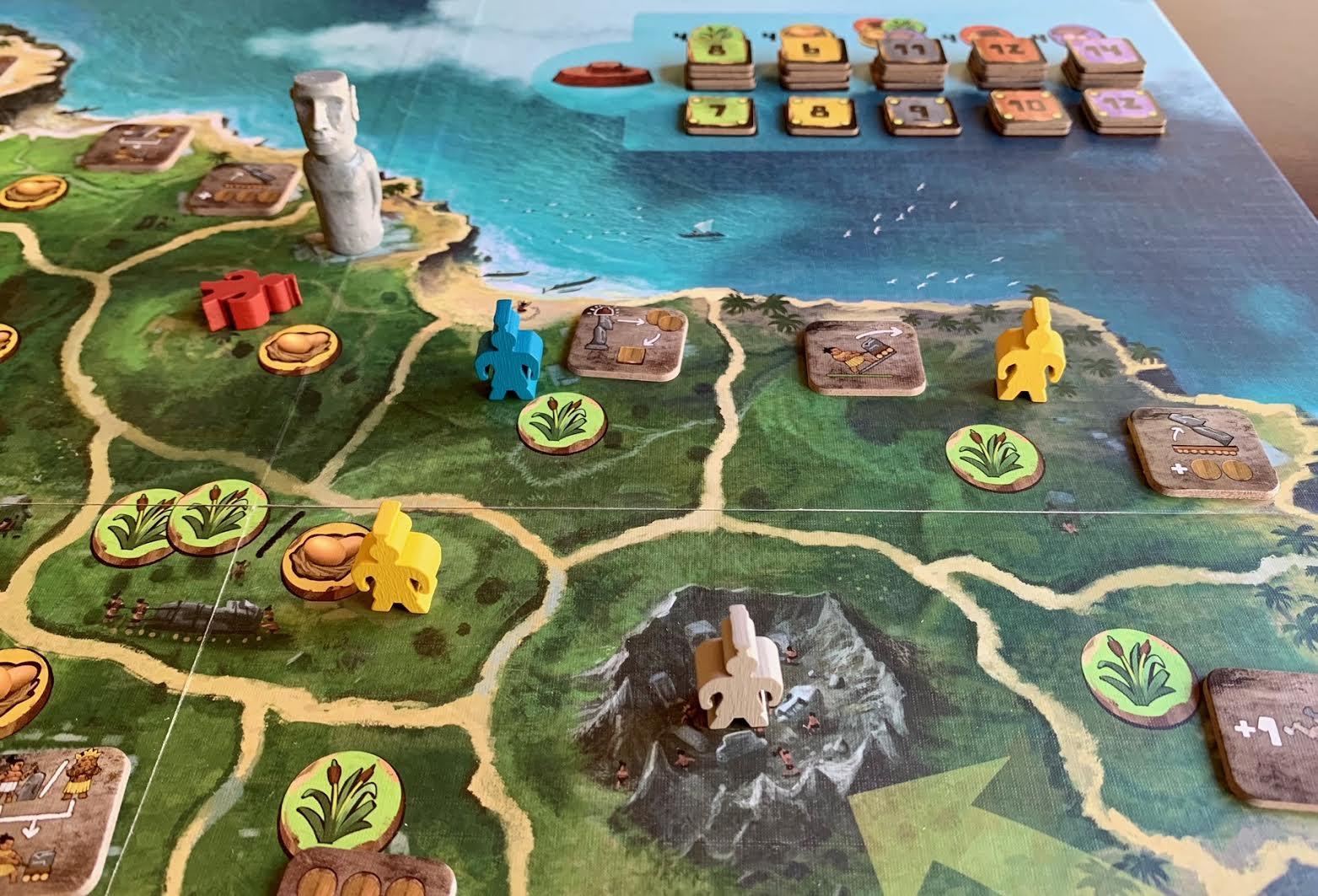 In this example, the yellow and blue players can both place a Moai using only their own workers, since they can draw a direct line from the Crater to an edge space. The red player (who has already placed a Moai this round and is therefore fatigued) had to enlist an opponent’s help to move the Moai to his space.

Each player also has a special worker whose only use is determining turn order. Like the other workers, this piece is placed during the first phase of the round, and it determines the player order for the second and third phases. It is up to players to determine when to place these special workers: either early to secure a good turn position, or later to claim optimal spots on the island/quarry. 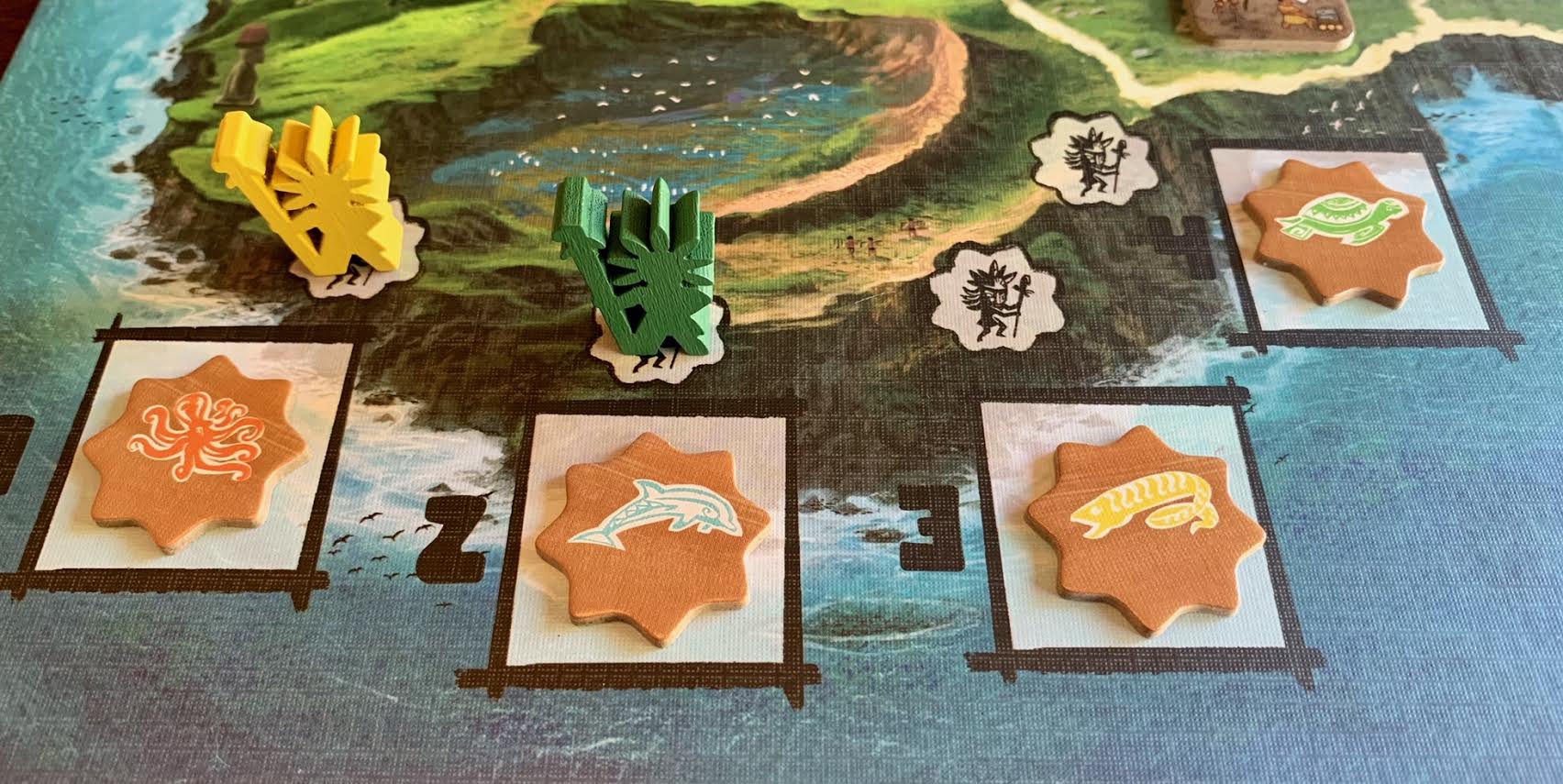 Yellow will be first in turn order and green will be second. Red and blue have not yet placed their workers.

In the later phases, players take the Moai they have built and transport them, as described above. If opponents’ workers are used to move a Moai, those opponents receive a resource bonus. The last figure in the line – the worker who actually puts the Moai in place – must belong to the active player. This worker then becomes “fatigued” and may not place another Moai, though it may help move additional ones. When a Moai is placed, the player who built it earns 1, 3, or 5 resources according to its size.

When a Pukao is placed atop a Moai, the player who placed it may spend resources to purchase an Offering tile. Offerings award points at the end of the game. There are a couple of other ways to earn points as well, but Offerings are the main method, and they make up the bulk of players’ overall scores. 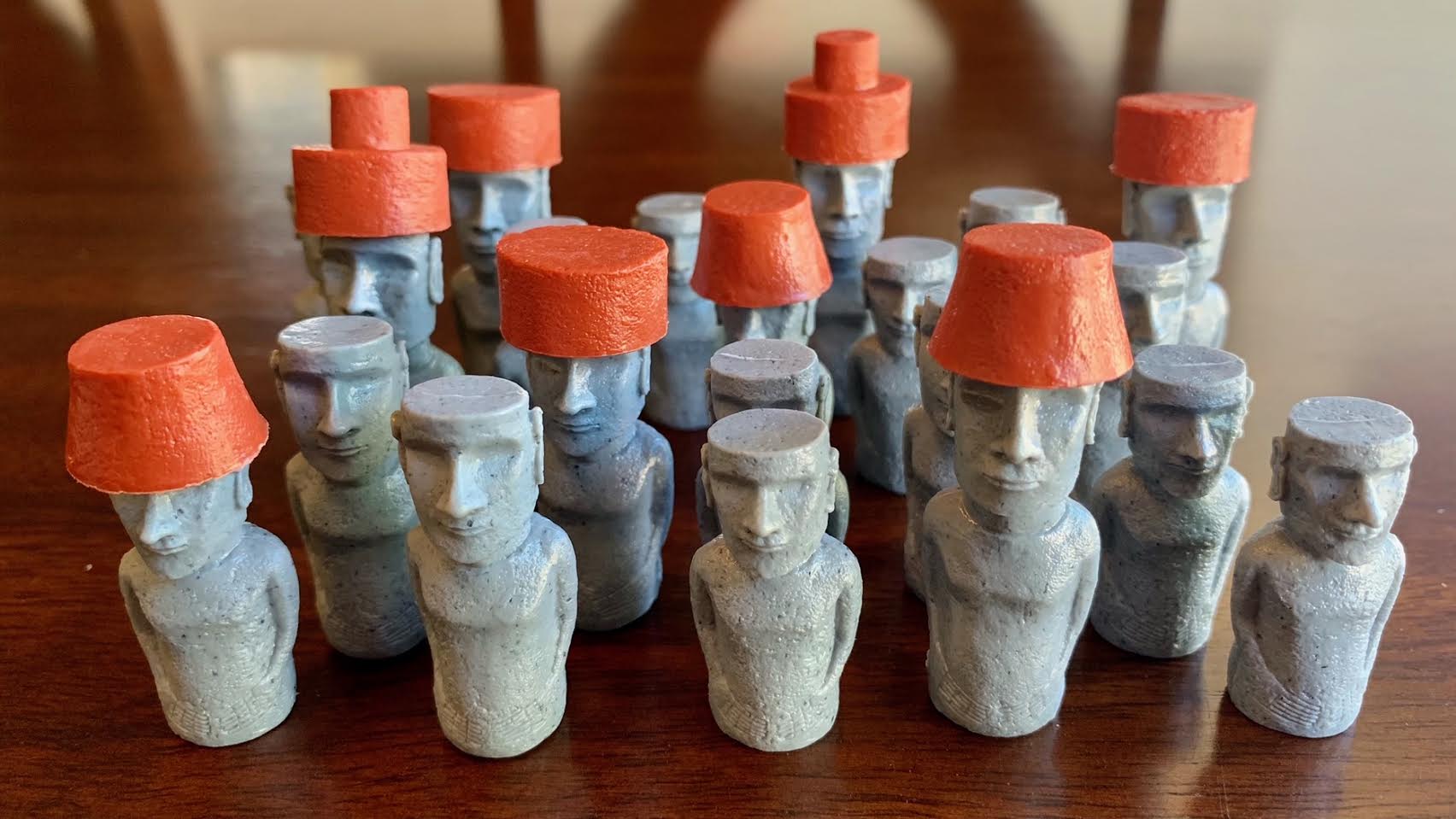 The game ends when there are only 2, 3, or 4 empty Moai spaces remaining, depending upon the number of players. At that time, the player with the most points wins!

I enjoyed Giants when I played it 10 years ago, and I enjoy Rapa Nui today. The tabletop hobby has changed drastically since Giants was released, but the design of this game still holds up today. (It’s worth noting that Rapa Nui is not a direct reprint of Giants, but it’s sort of a streamlined reworking.)

Rapa Nui‘s classic simplicity gives it a broad appeal; this is a game that both new and experienced gamers can enjoy. It isn’t worker placement in the modern sense (these days, “worker placement” usually means “action drafting”), but it feels like a predecessor to it. Playing this game, one can see the evolution of the worker placement genre.

The production of Rapa Nui is very nice, though not quite as nice as I remember the original Giants being. The board is beautifully illustrated and the components are all vibrant and inviting. The stars of the show are, of course, the Moai figures, but unfortunately their 3 sizes are much too close in height to distinguish at a glance. It’s a fairly significant issue that could have easily been avoided by making the different sizes different colors, as Giants did. Other than that, though, everything looks great.

Sadly, the original Giants never made a splash, but was instead quickly relegated to the “old, obscure games” category. I’m delighted that it is being given a second chance in a streamlined version, and I hope that this reworking will finally give it the recognition it deserves. Check this one out!

Though it is based on a 13-year old design, Rapa Nui still holds up today. It is definitely worth checking out.