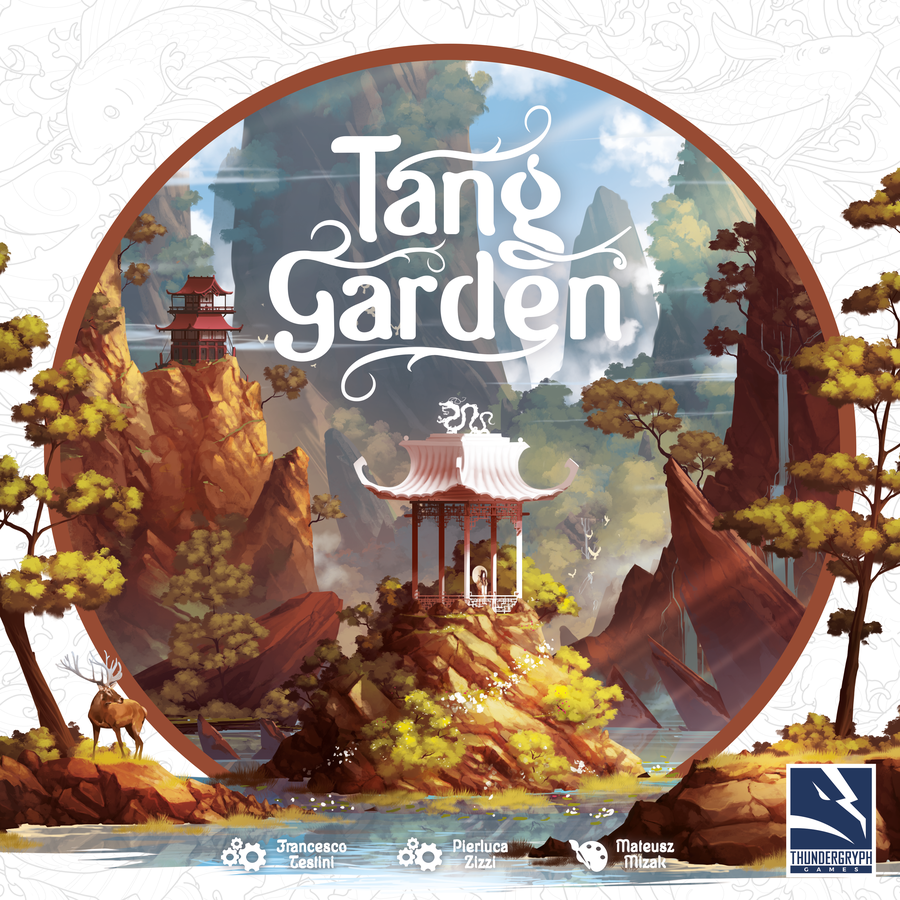 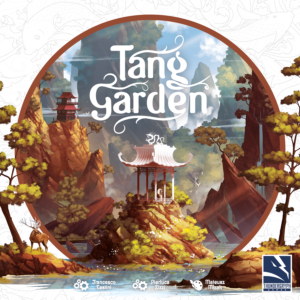 Tang Garden is an artistic tile-laying game of building an ancient Chinese zen garden. Starting with a stark, plain board, tiles, decorations, and landscape pieces are added to bring the garden to life. The game has some odd issues that keep it from being great, but the experience is still enjoyable as a next-step game.

The introduction to the rulebook gives some historical background, and mentions that Emperor Xuanzong lived with ” his famous concubine, Yang Guifei.”

Tang Garden is eye-catching, to say the least. In this game, 1-4 players collectively build the titular garden and try to earn the most points in the process.

The game begins with a single tile in the center of the board. Throughout the game, players place additional tiles to extend the garden. The tiles show 3 types of landscapes: forest, rock, and water. When a tile is placed, it must “fit,” such that it matches all adjacent tiles, per standard rules of the genre. The only exception is that some pieces feature a red wall, which can match with any terrain. 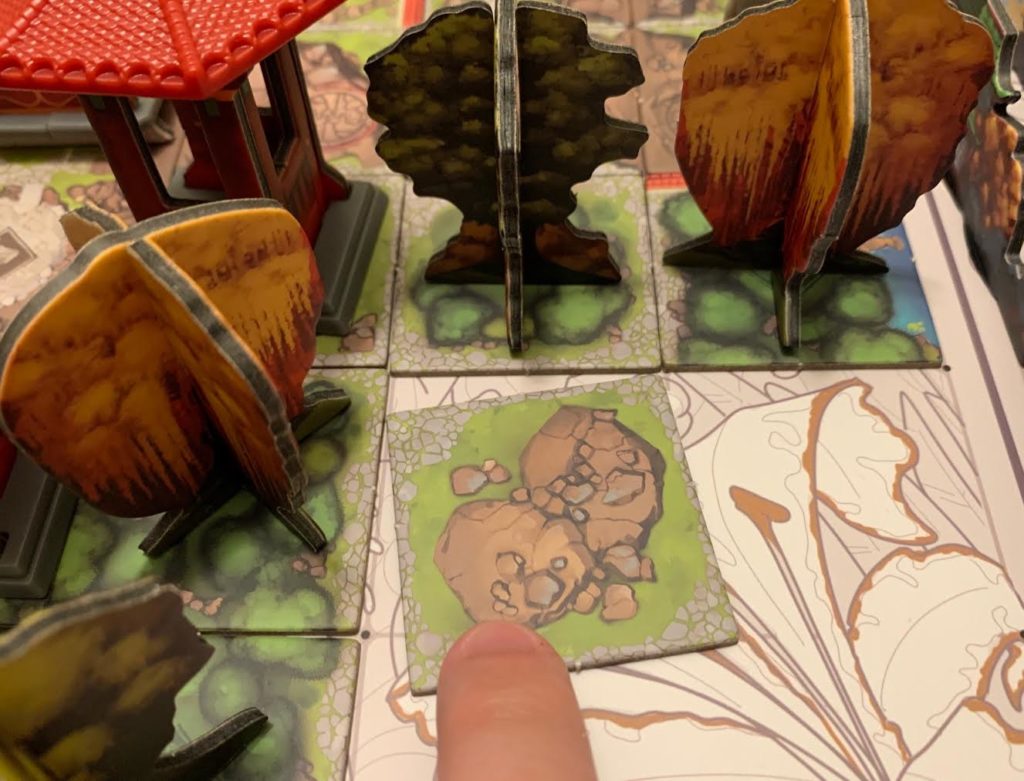 Each player also has a personal tableau, with a track corresponding to each terrain type. For every terrain match a player makes, he can advance the appropriate cube up 1 space on his tableau. Additionally, if a player “completes” a terrain area, such that it cannot expand anymore, he advances the appropriate cube.

In the example above, the tile has a self-contained rock formation, so the player advances his yellow cube for completing a rock area (that was easy!). Notice that the player has also matched a stone footpath. If a player does this once, he earns 1 coin. If he does it twice – as shown above – he can either take 2 coins, or move any cube up 1 space on his tableau. 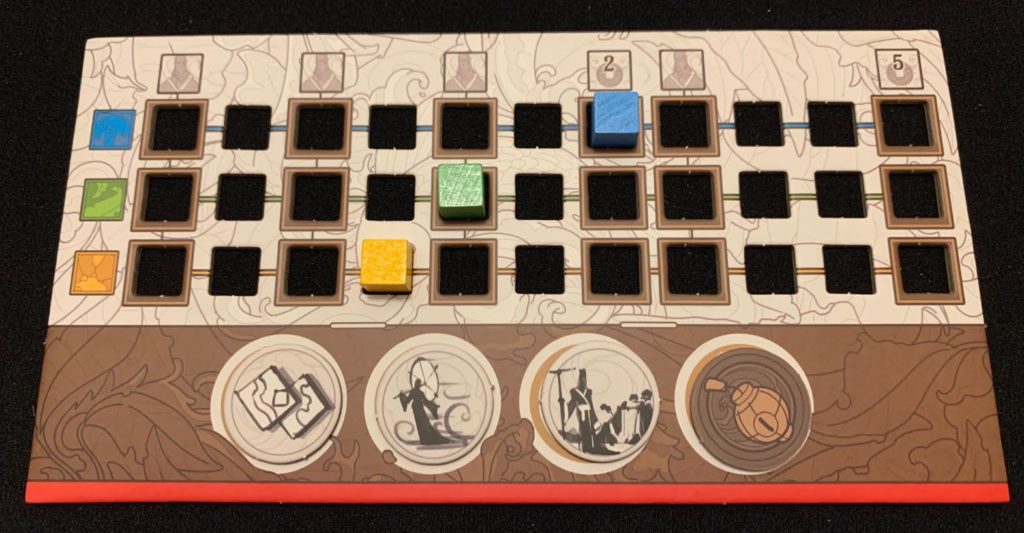 Instead of placing a tile, a player can add a decoration. To do this, he draws a number of decoration cards, chooses 1 to use, and places the indicated object on the board. At the end of the game, decoration cards are worth points, so players’ are incentivized to beautify the garden. 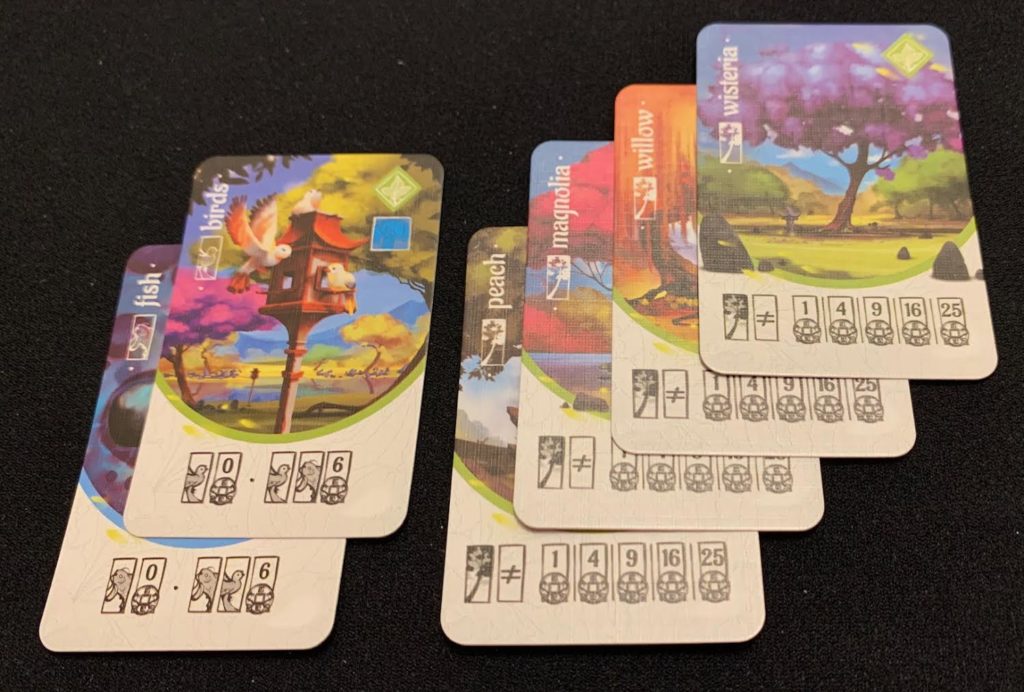 As examples, a fish and a bird card together are worth 6 points at the end of the game, and the tree cards use a set-collection system; the more unique trees a player has, the more they are worth.

As players move their cubes along their tableau boards, they will periodically be allowed the perform the free “Influence a Character” action. To do this, they select an available character card and place one of their character figures on the board, such that it is “looking” at a particular edge.

Characters earn points if they can “see” specific features of the garden, either the tiles in their line of sight, or the upright landscape pieces at the edge of the board. Thus, players want to position their figures to maximize how much they score at the end of the game.

Play continues with players adding tiles and decorations until either a) 1 of the 4 tile stacks runs out, or b) the tile grid reaches a certain size. At this time, the game end is triggered. Players earn points for characters and decoration cards, and the player with the most points wins!

Simpy put, Tang Garden is the most beautiful game I have ever seen. Playing this game feels like being immersed in a work of art. The board begins as a stark, bare grid of squares, but quickly evolves into a lush scene for players to get lost in.

The decision space in Tang Garden is fairly simple – either place a tile or place a decoration – but it still provides room for strategy. Players need to continually advance their cubes, while also making sure to collect lots of decoration cards, position their characters to score points, etc. 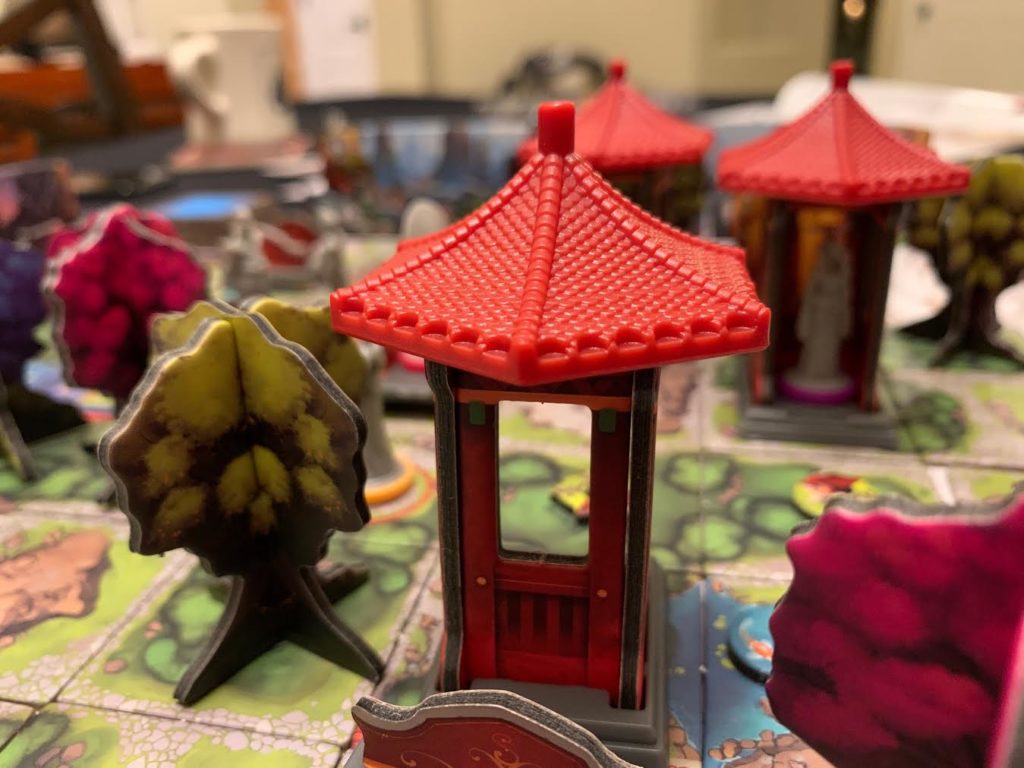 FYI, the coffee cup in the background does not come with the game.

Unfortunately, this game has some significant production issues that weigh it down. Most notably, its iconography is incredibly small, such that players need eagle eyes to distinguish one symbol from another. This problem is then exacerbated since players often have to see icons that might be 3 feet from them. Trying to make them out feels like trying to see the details on a dime from a yard away.

To be fair, the icons are color-coded, which is good; if they weren’t, the game would be unplayable. However, there are so many colors used in the game that even the colors themselves can be difficult to distinguish. What’s more, it can be tough to see at a glance which direction a character figure is facing. It would have been helpful if the figures’ bases had some sort of directional arrow, but alas, they do not.

Were it not for these issues, Tang Garden might have been a great game. As it is, however, it’s only a good game. Definitely worth a try, but bogged down by easily-preventable issues.

Tang Garden is the most beautiful game I have ever seen. Unfortunately, several significant production issues weigh it down, keeping it from being a great game. As it is, it's only a good game.