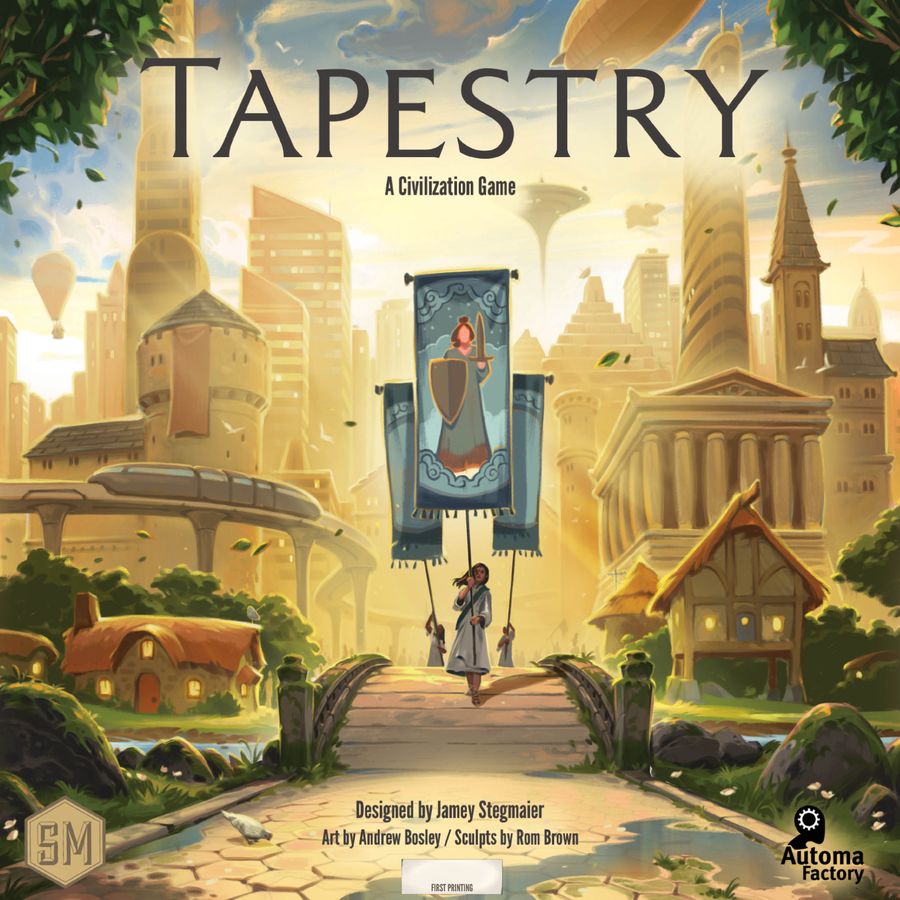 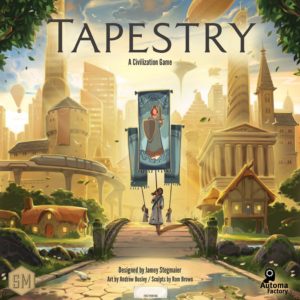 Tapestry is a civilization-building game in which players progress through – and in fact write – history. Starting at the dawn of mankind with the discovery of fire, they explore the land, gather resources, develop cities, and make notable breakthroughs as they work toward a variety of objectives. It is an enjoyable, mid-weight euro game with a gorgeous production quality.

Even though euro games are generally not my thing, I always take notice of Stonemaier releases. Tapestry is their newest game, and right out of the gate, it looks cool, with 18 gorgeous, prepainted landmark miniatures.

A sampling of them; everything from an apothecary to a space shuttle launchpad.

In this civilization-building game, 1-5 players journey through time, creating their own histories. The primary action takes place on a central board, but each player also has an individual tableau which tracks their resources, technologies, and capital city. 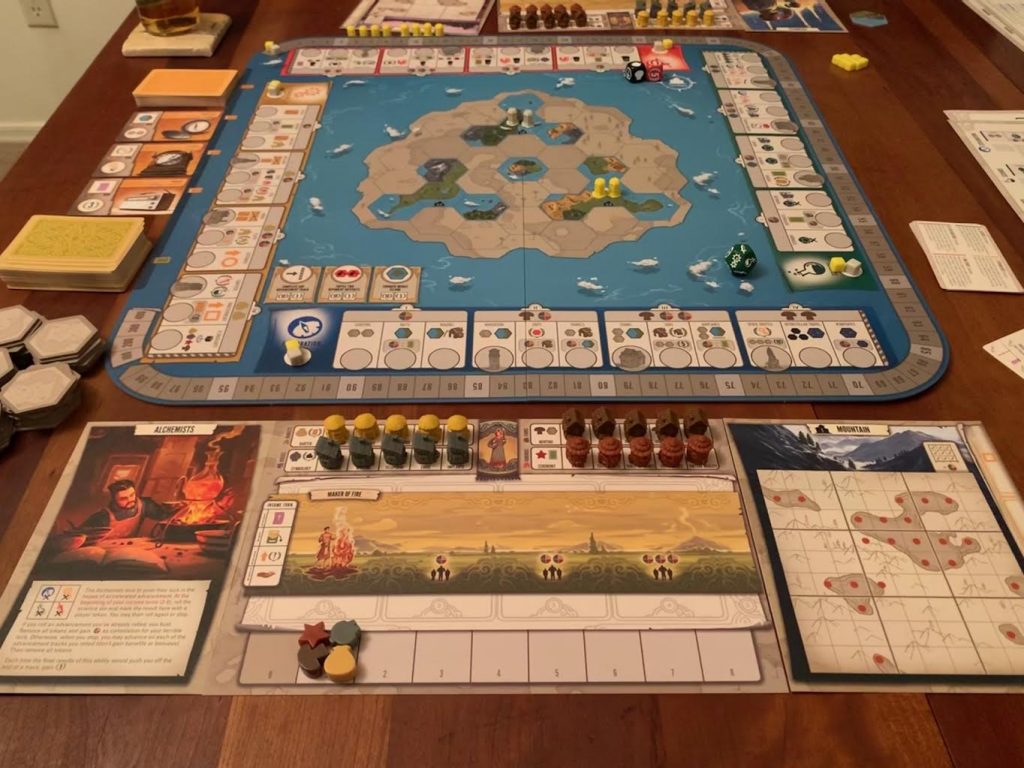 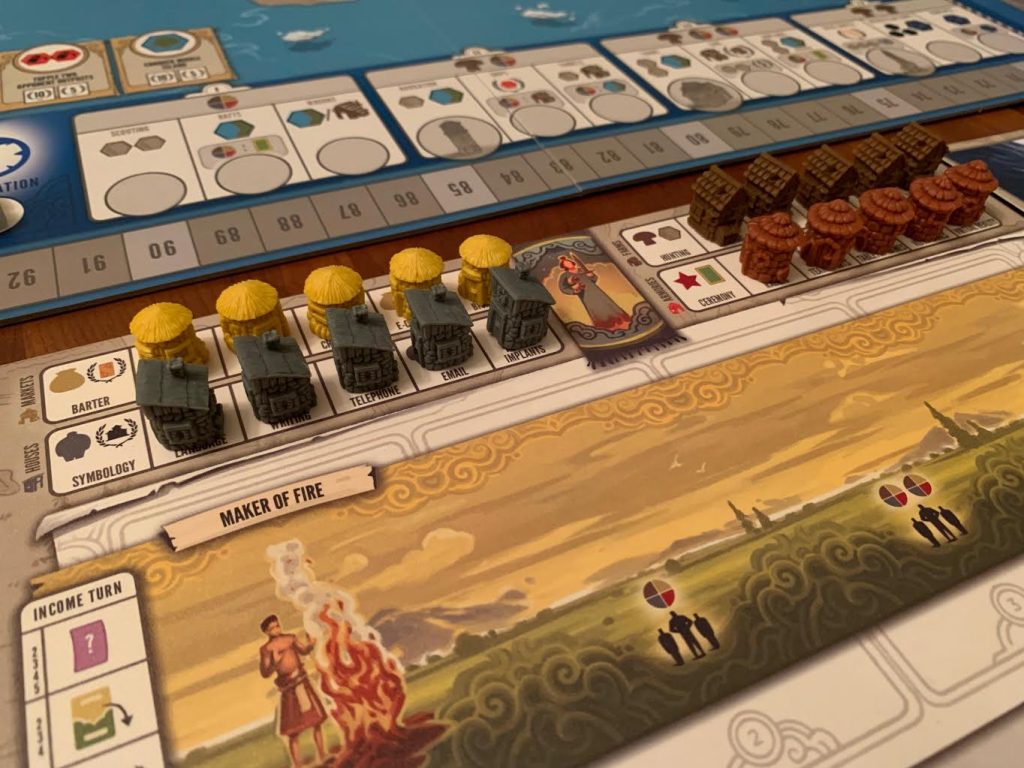 Tapestry cards can do all sorts of things, such as provide instant abilities or bonuses that last an entire era. (An example is shown below.) In the first era, players do not play them, because their first major event is the discovery of fire, but they will likely use them in each successive round. Resources are gained based on what spaces are uncovered at the top of a player’s tableau – the more buildings they are able to construct, the more spaces they will uncover and thus, the more resources they will earn going forward. 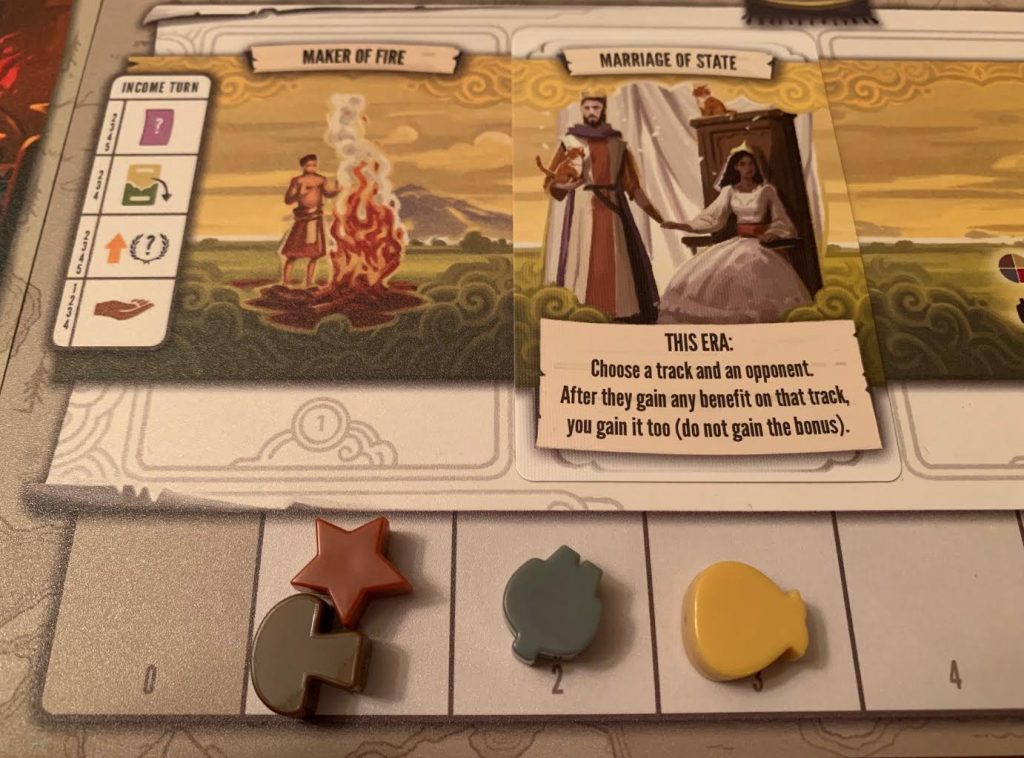 Resources are tracked at the bottom of the tableau.

Most often, however, players will spend their turns advancing along the tracks on the main board. This action is as simple as 1) pay the listed resource cost, 2) move the player marker to the next space, and 3) do what the new space says. 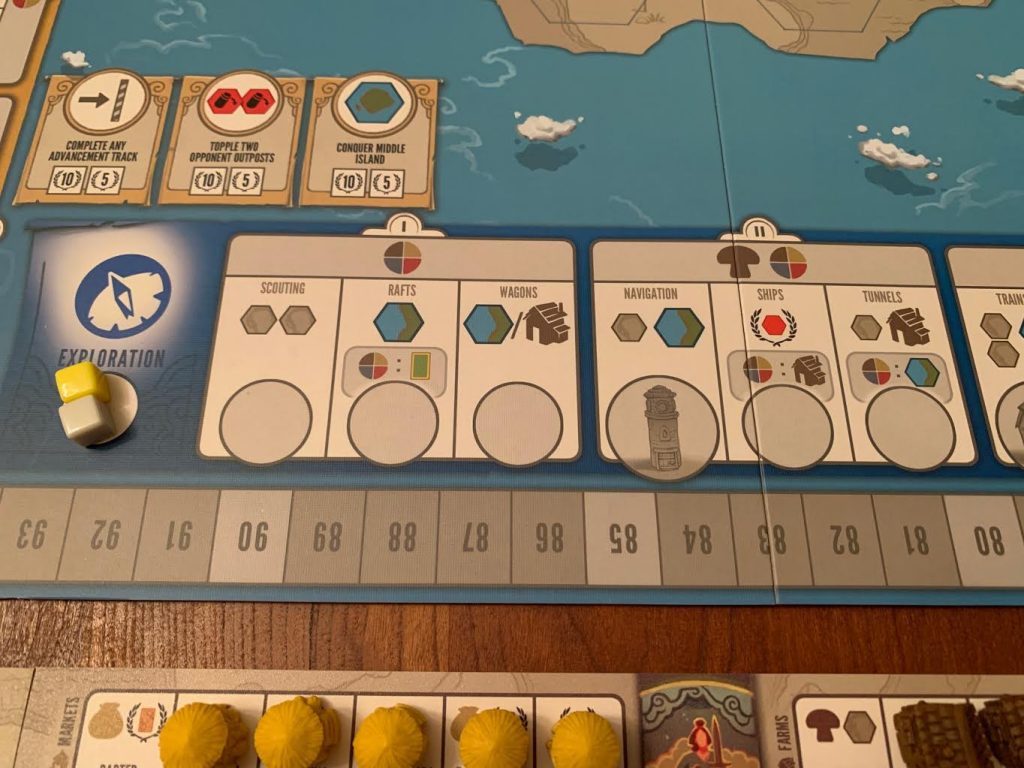 Each track is broken into sections, and every section has a resource cost. On the Exploration track, for example, the first 3 spaces require any single resource to use, as noted in the gray bar above them. Once a player has moved his/her marker through this first set of spaces, the next set will cost a food and another resource, and so on.

Now, I should pause here to say that there is a great deal of iconography in Tapestry, but it is handled very well. First, the symbols are quite intuitive, and second, the game includes reference sheets which are very helpful and user-friendly.

Certain spaces bear the image of a building on them (such as the Lighthouse on the “Navigation” space above). The first time a player lands on such a space, he/she may be able to add the matching building to his/her capital city board. 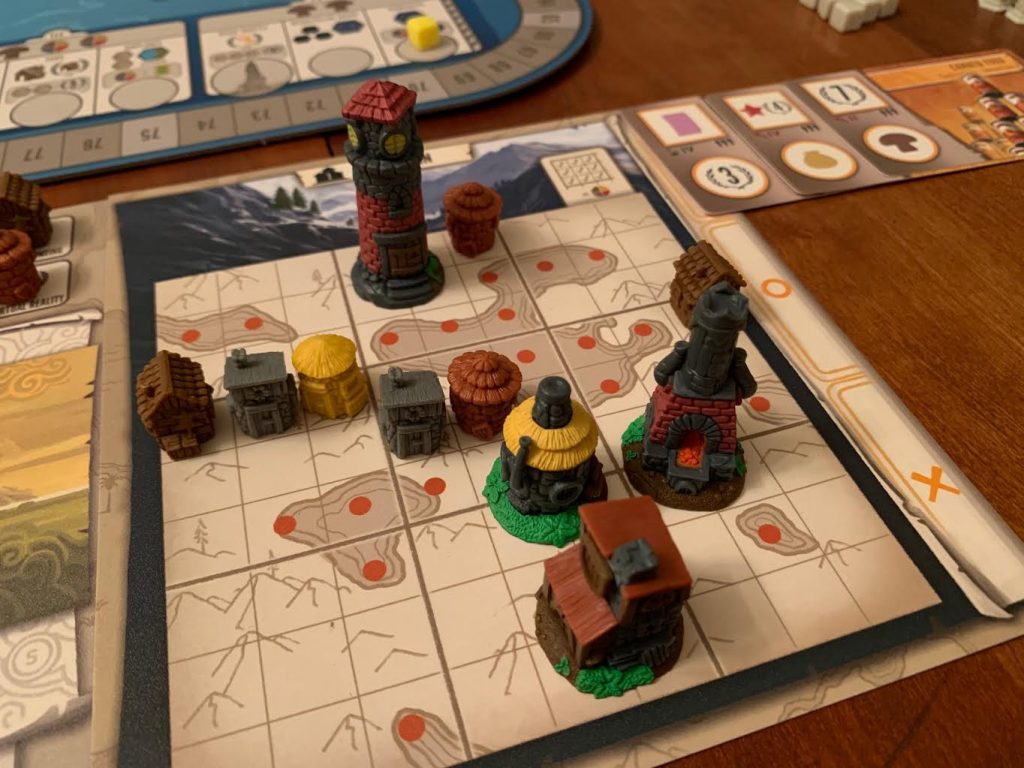 Players can earn points and/or resources by filling out their boards, and landmark buildings like the ones shown here are very helpful, simply because of their size. They take up multiple spaces in the capital city, so they are desirable for the sake of filling it up. (Not to mention, they just look amazing!)

Usually, a era will end for a player when he/she has run out of resources. The game arc of Tapestry involves players getting better and better in each successive era, so the whole experience has a sort of efficiency-puzzle vibe to it.

There are a number of other aspects to the game, including exploring the map… 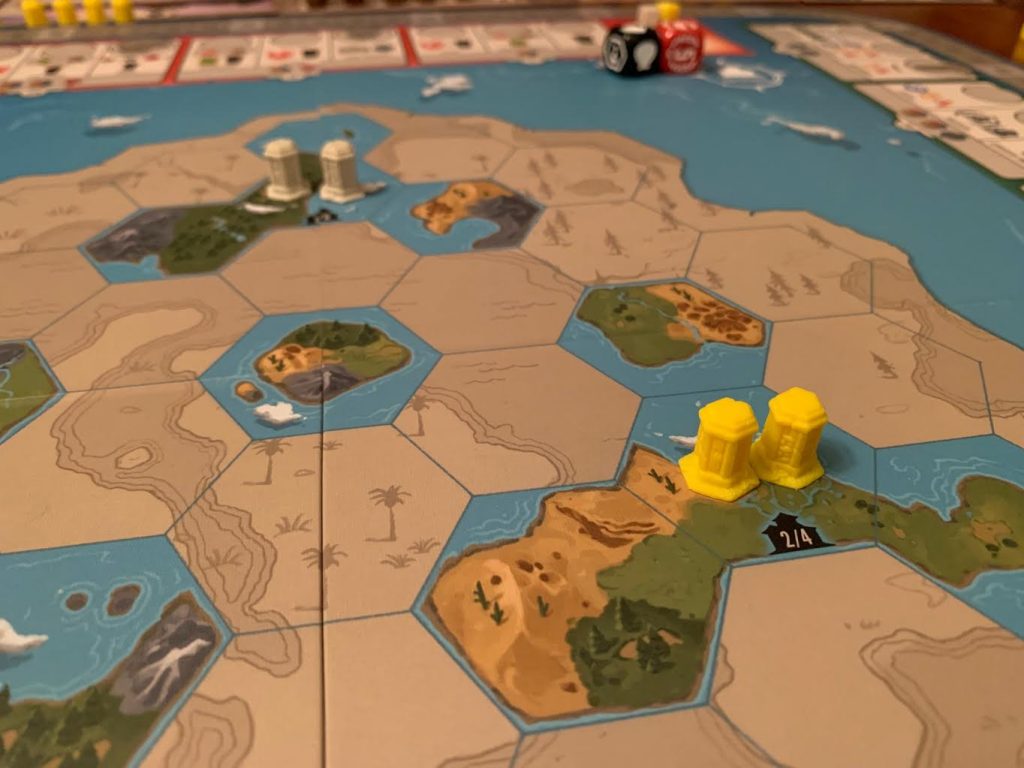 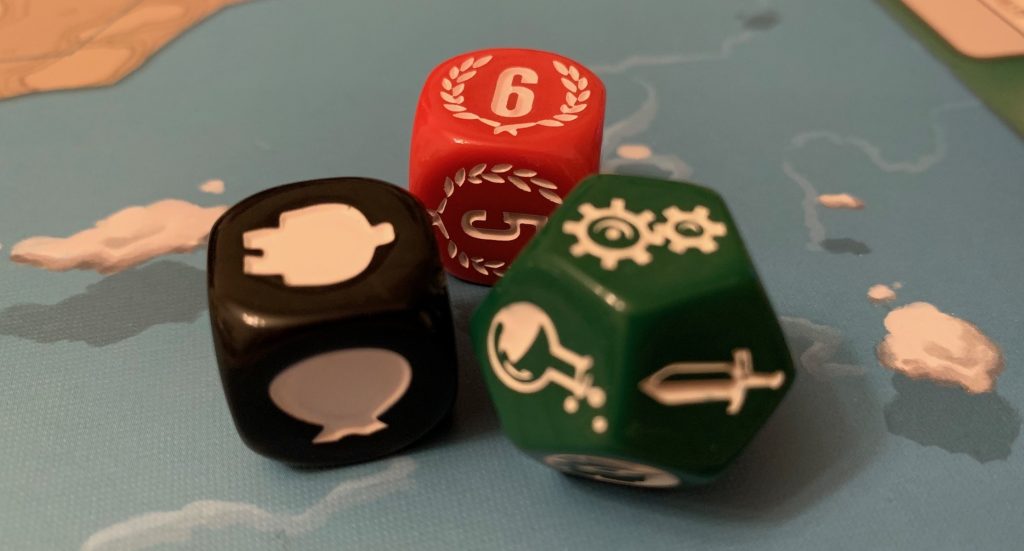 … and possibly venturing into space (!)…

… but really, everything comes back to the 4 tracks on the game board. For being as strategic as it is, Tapestry is surprisingly streamlined. (Its rulebook is only 4 pages!)

The game may end at different times for different players, depending upon how far they can make their resources go. When all players have finished their last era, the player with the most points wins.

I wouldn’t call Tapestry a simple game – there is a fair amount that players need to understand in order to get started – but once the game gets underway, it flows very smoothly.

As expected from Stonemaier Games, the production is out of this world. The landmark miniatures are the showstoppers, of course, but even the rulebook and player mats are beautifully textured, with lovely, tactile finishes on them. The entire package is gorgeously crafted, and it feels like a high-quality product.

Tapestry is still quite new, but already, there has been much discussion in the community about balance issues between the various factions. I am not one to be swayed by popular opinion, but in this case, I believe the population is correct – the powers do not all seem appropriately weighted. However, I understand that as of this writing, errata have been released to correct some of these issues, so it seems the publisher is taking action to address them. 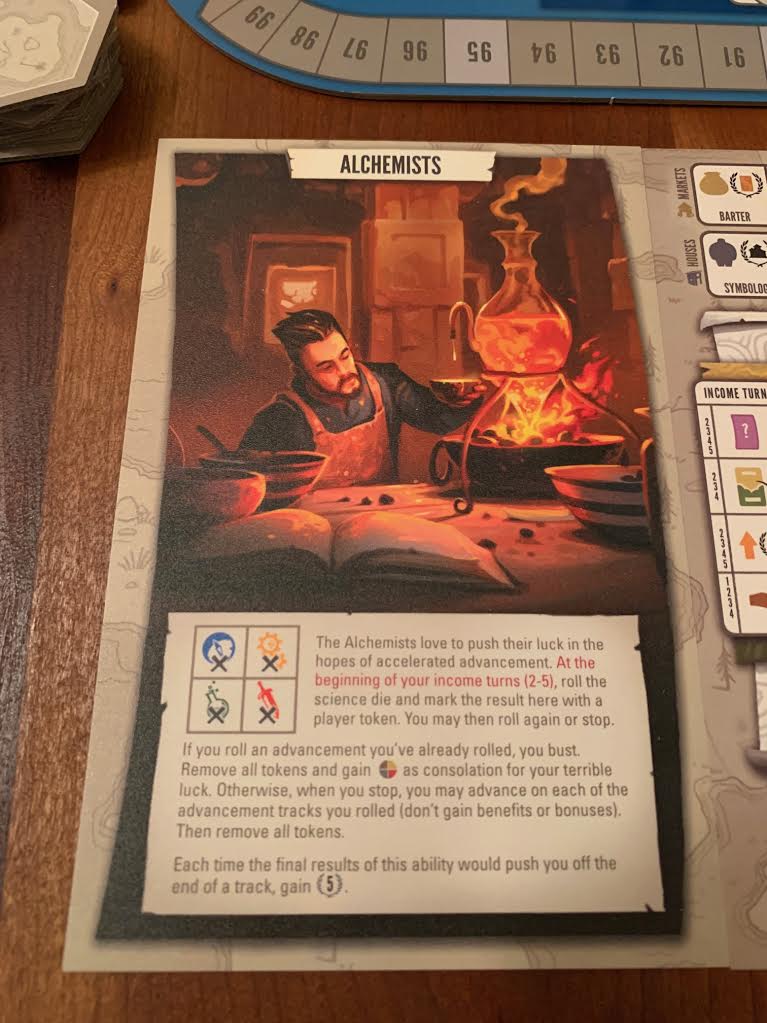 All in all, I found the game to be an interesting strategic exercise. Tapestry will definitely appeal to the euro fan, so it’s worth checking out if that is your cup of tea. It’s not my favorite Stonemaier game (that title still belongs to Viticulture), but it has unique ideas and stands as a solid game in its own right.

A discounted copy was provided by Stonemaier Games.

Though it is not my favorite Stonemaier release to date, Tapestry is still a solid euro in its own right. Definitely worth a try; just be sure to check publisher errata!