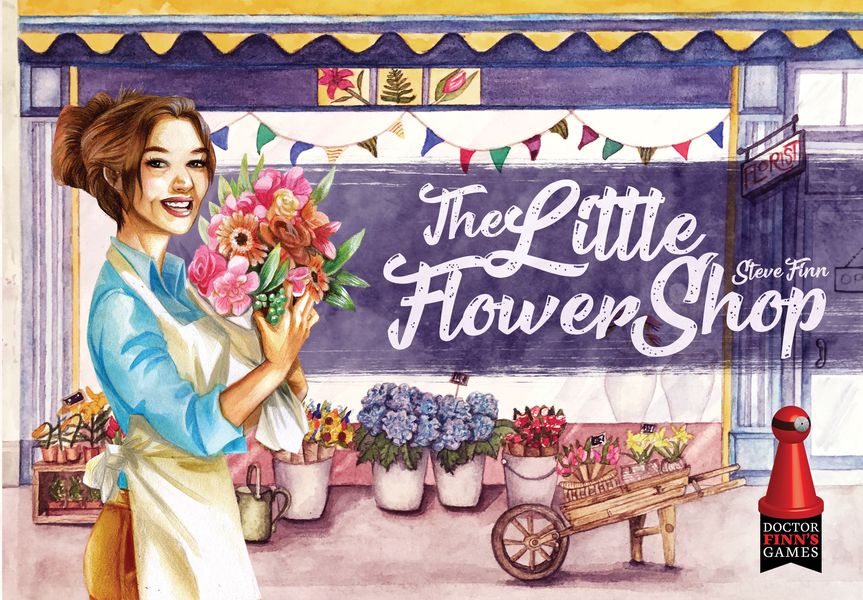 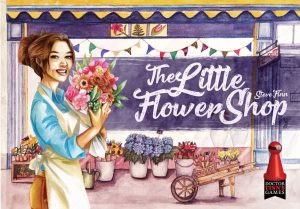 The Little Flower Shop is a lovely-looking drafting game with a delightful theme. In this game, players are florists, competing to design the best-looking shop window. Each turn, they select cards that can be used to sell bouquets, beautify their tableaus, and more. In addition to its beautiful aesthetic, it is a great, lightweight game for all ages.

It’s so easy for a game’s theme to feel derivative and uninspired. The Little Flower Shop is a breath of fresh air amidst an overcrowded field of zombie, Cthulhu, and trading-in-the-Mediterranean games. This pick-and-pass game features stunning visuals on top of a solid drafting system.

To begin, each player receives a board in their color, representing their store window. The windows have room for eight vases – six on the sill and two on the hanging shelves – as well as three hanging baskets. A trio of starting vases begins on each board. 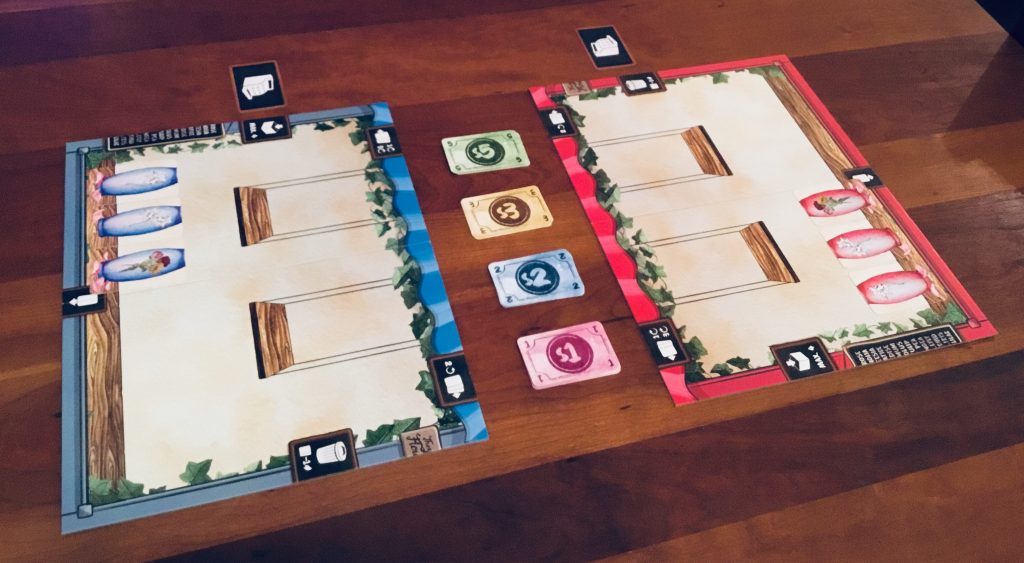 The game lasts three rounds. In each round, players receive a hand of cards, from which they choose one to play and pass the rest to their neighbor. This pick-and-pass action is repeated until all cards have been played. (Anyone familiar with Sushi Go or 7 Wonders will immediately recognize this drafting system.) 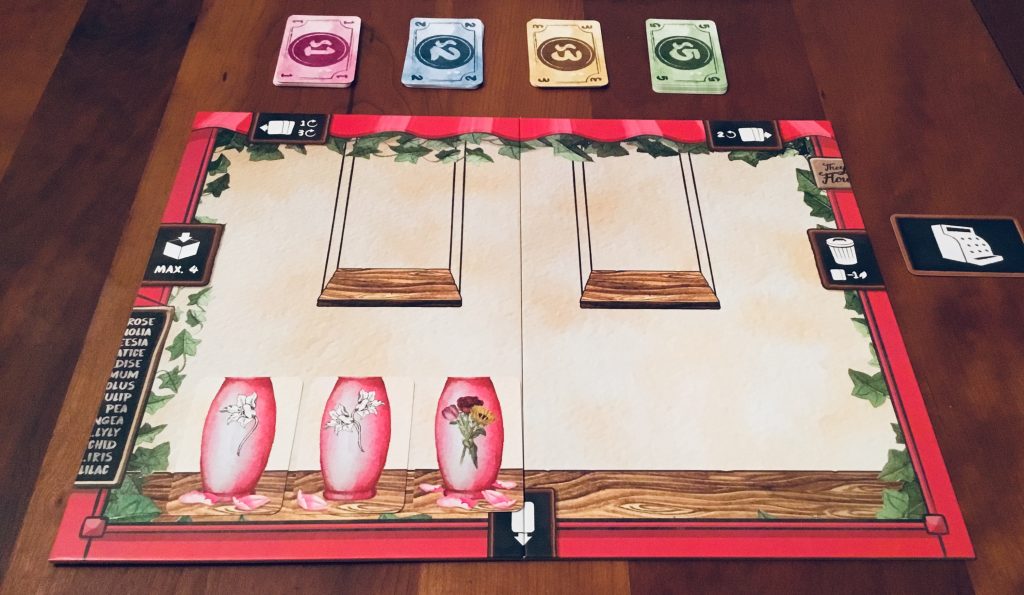 The cards players can draft include: 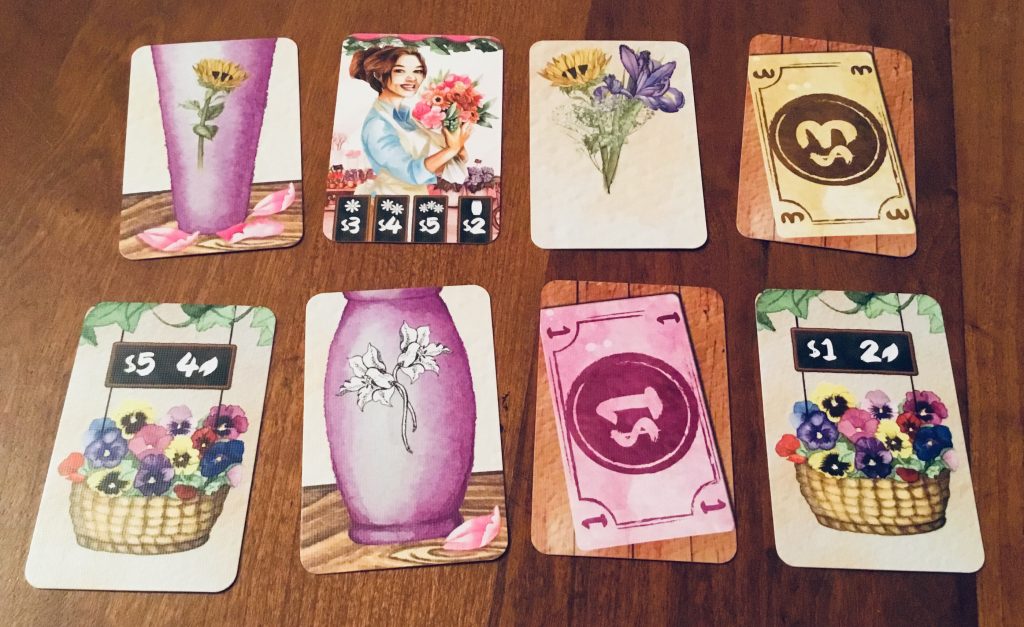 As players take cards, they will start to build up their tableaus. During the last pass each round, when players receive a hand containing only one card, they may choose to either play it, or spend $2 to discard it and draw a random card instead. This is a fairly minor detail of the game, but I really like it because it gives players a decision to make when they otherwise would not have one. 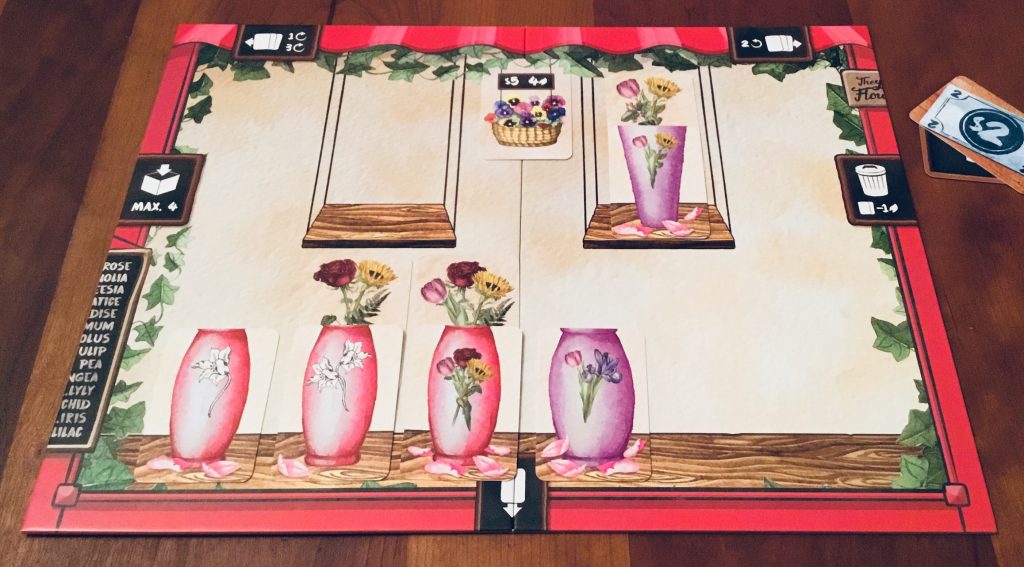 On the left and right sides of the player boards are the “storage” and “trash” areas, respectively. Storage is used to hold cards that players acquire, but might not be ready to play immediately. This could be, for example, a hanging basket that a player cannot yet afford to purchase, or a flower for which he/she does not have the appropriate vase. At any time, players can reorganize cards in their windows and storage areas, but each storage area can only hold four cards. If a player takes a card that cannot be used or stored, it must be placed in the trash; trashed cards subtract from a player’s overall score. (At the end of the game, empty vases and cards still in storage are also trashed.)

When a player wishes to sell flowers, he/she may sell a single flower card, a flower/vase set, or an empty vase by itself. (The latter can be a good choice near the end of the game, since empty vases are bad.) The more flowers that are shown on a card, the more money it is worth when sold. At the end of the game, players earn an extra point for every $5 still in their possession.

When the third round is complete, players total their scores and the person with the highest score wins!

The Little Flower Shop is an enjoyable pick-and-pass game. It is lightning-quick to play, and it has a strikingly beautiful aesthetic. Admittedly, the theme of this game could have been anything at all, but I really, really like the chosen theme. It‘s not the only “flower” game out there – I can think of a couple of others – but it is certainly the most thematic that I have played.

Though it fits squarely into the family game category, The Little Flower Shop has subtleties that keep it engaging for experienced gamers. For example, the vases have point values ranging from one to four, and since they can be sold for money or saved for points, players have to decide how best to use them. On the one hand, points ultimately decide the outcome of the game, but on the other, money helps players do things like purchase hanging baskets, which can be quite significant. Out of this push-and-pull, interesting decisions arise.

The rules are very simple, making this game highly accessible to a variety of ages and experience levels. The theme and artwork also help the experience feel intuitive; it stands to reason that a flower card should be put “in” a vase card, and that money should be placed on the cash register. Some of the core game concepts will be immediately obvious, even to someone who has no idea how to play.

All told, I enjoyed The Little Flower Shop. It checks a lot of boxes for me: it is simple to learn, quick to play, lovely to look at, and has a great theme to boot. Fans of drafting games and/or family games will definitely want to check it out.

A review copy was provided by Dr. Finn’s Games.

I enjoyed The Little Flower Shop. It uses a tried-and-true mechanism well, and the experience is elevated by a great theme and presentation.