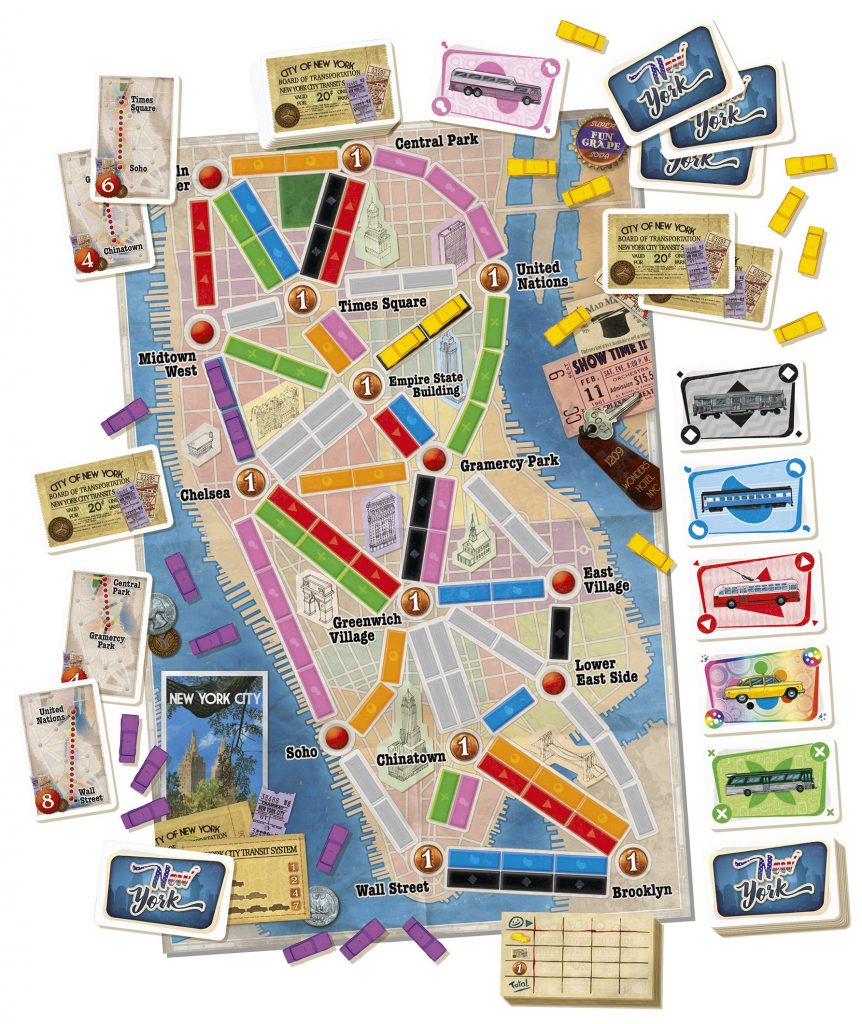 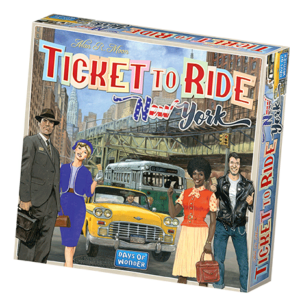 Since Love Letter in 2012, micro-games—board and card games with small components, lasting around 15 minutes or less—have skyrocketed in popularity. (The last month of my daughter’s Happy Meals from McDonald’s have even included tiny, tiny versions of Hasbro games like Connect Four and Mouse Trap.) It’s only natural to see established franchises want a piece of that pie, and now we have the micro-game version of Ticket to Ride. Ticket to Ride: New York plays in about 15 minutes, and comes in a (relatively) small package. But does it maintain the fun of the original? Let’s find out!

The game is primarily just pictures of taxis and actual little plastic taxis, and a map of New York in the early 1960s. There are no characters, other than the cover. However, Ticket to Ride games can lend themselves to particularly mean moves, even sometimes unintentionally, so it could lead to frustration and anger for some players. 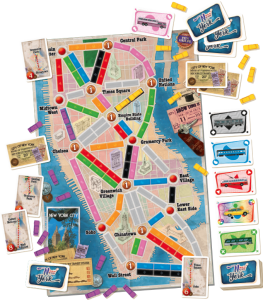 I have to admit that when I heard a micro-game version of Ticket to Ride was coming, I expected there to be a lot of rules changes. In a way, this was already tried a long time ago with Ticket to Ride: the Card Game. However, Ticket to Ride: New York really is a straight “compactification” of the original: there are fewer trains, fewer colors, fewer cards, fewer tickets… but the rules, by and large, remain the same. The only new rule is that Longest Route has been replaced with certain cities giving a 1-point bonus for connecting to them.

Not only are the rules unchanged; so are the production values. Everything looks great, and while the plastic taxis are a little flimsy, there are 60 of them (and a few spares) in a game with a $20 price tag. I’m incredibly impressed with the value for the price; many strictly card games run $20!

So, the question is simply whether a well-produced, tiny version of Ticket to Ride can maintain the charm and fun of the original. I think it succeeds, but you have to have the right frame of mind. The people who found the game disappointing come in two types. The first type is the person who feels like Ticket to Ride needs bells and whistles like the expansion maps and doesn’t enjoy the original USA map. The second type is the person who expects a 15-minute version to have the same level of depth and decision-making as the full game, which is impossible.

You can’t compare this game, fairly, to Ticket to Ride. Compare it to Love Letter instead. In my opinion, there are still plenty of decisions to be made in this game. If and when to divide for tickets, when to grab that much-needed route or grab more cards while the colors you want are present, and so on—all the standard conundrums of Ticket to Ride are there, there are just fewer of them. Even the decisions are much more interesting and engaging than deciding between two cards in Love Letter. And if you feel like one game was a little out of your control, just play again—you could play this game 3 or 4 times in one lunch hour. Some of the changes I even wish were part o the standard game, like fewer total colors for routes, resulting in much less clogging of unwanted colors. Personally, my only complaint is that the game isn’t as portable as other micro-games, but it’s still plenty small—it just doesn’t fit in your pocket. I guess I never really expected it to, but it just means that sometimes it’s easier to reach for an even more portable micro-game.

For me, this is the definitive travel edition / lunchtime version of Ticket to Ride. It never overstays its welcome. It’s a great introduction to the series for new players, and it’s a great snack for gamers who don’t have time for the full meal.

Thank you to Asmodee for providing a review copy of Ticket to Ride: New York.

Ticket to Ride: New York won't change anyone's mind about Ticket to Ride, but for fans of the original, it's a wonderful, inexpensive travel edition.