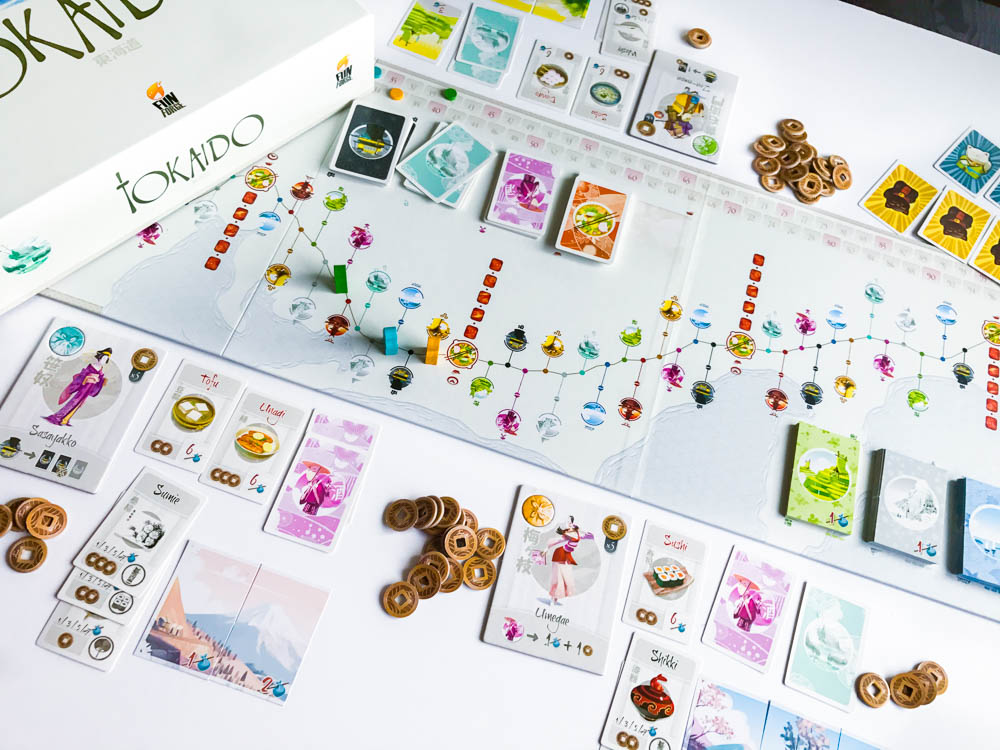 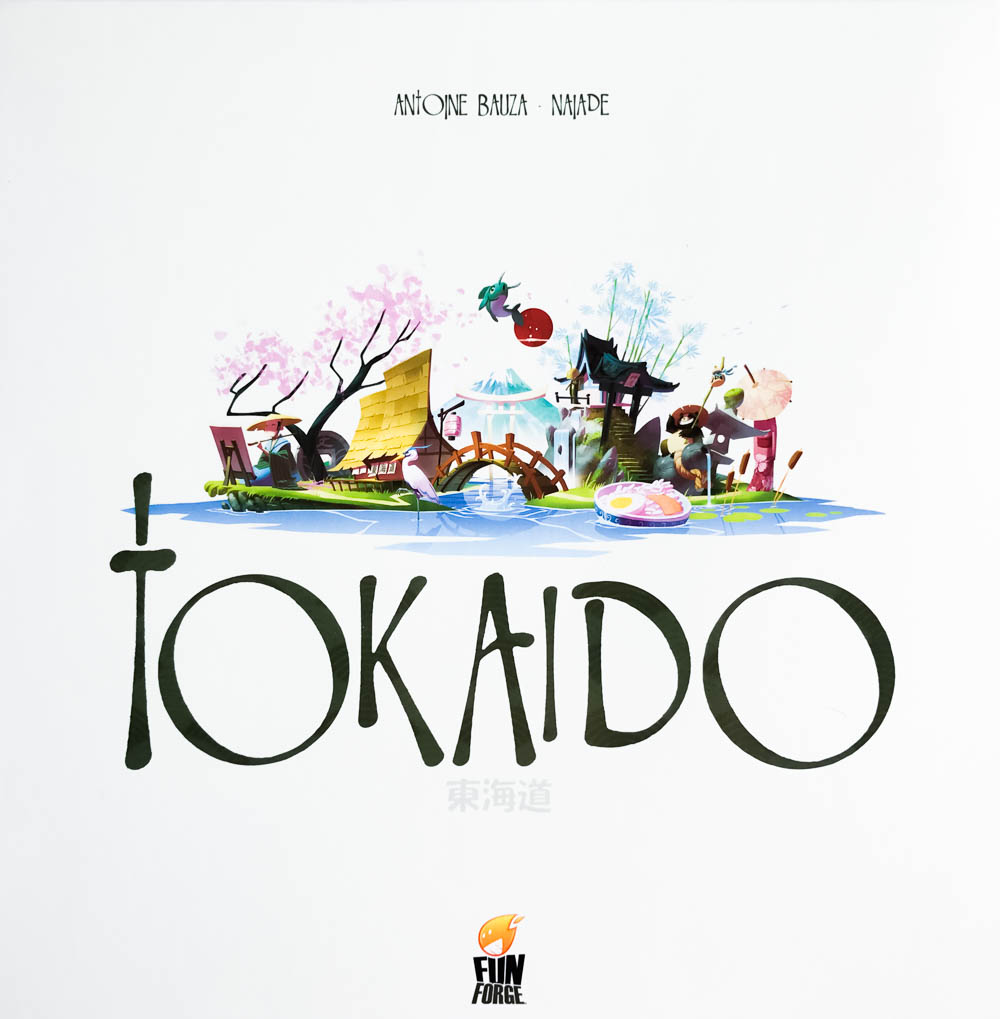 Running 303 miles long, the ancient and historic Tokaido road stretches from Tokyo (Edo) to Osaka and Kyoto. Parallel to the Pacific, and located on the southern coast of Honshu, Tokaido was responsible for travel from Kyoto to central Honshu. The Tokaido was one of five integral roads in old Japan, strengthening the control of the shogun over the country.

The road, first traveled near 1600 AD, was famous for 53 post stations, which provided inns, food, and many other opportunities for travelers. Wheeled vehicles were unusual, as most on the road were pedestrians, as well as small horses. Many artists traveled these roads, with the most famous being Hiroshige. Hiroshige painted wonderful prints on woodcuts of his journey, each detailing every station found on the voyage from one end of the road to the other.

Tokaido is also a board game from the brilliant Antoine Bauza, which recreates the experience of leisurely travel on the road. Players will meet other eccentric walkers, visit breathtaking locations and gather food, souvenirs, and experiences they will never forget. 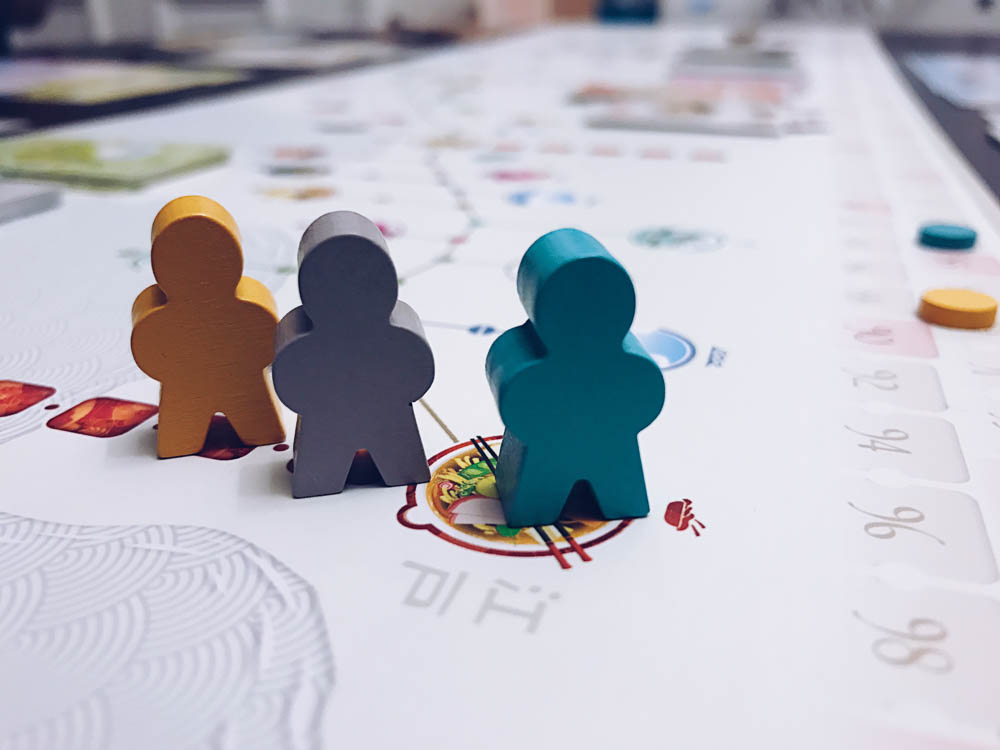 Players will have the option to visit Buddhist temples and donate their gold to support temples through tithing. This gains victory points, as well as celebrates the player who gave the most. If this is concerning to you, either avoid the game, or avoid the temples. 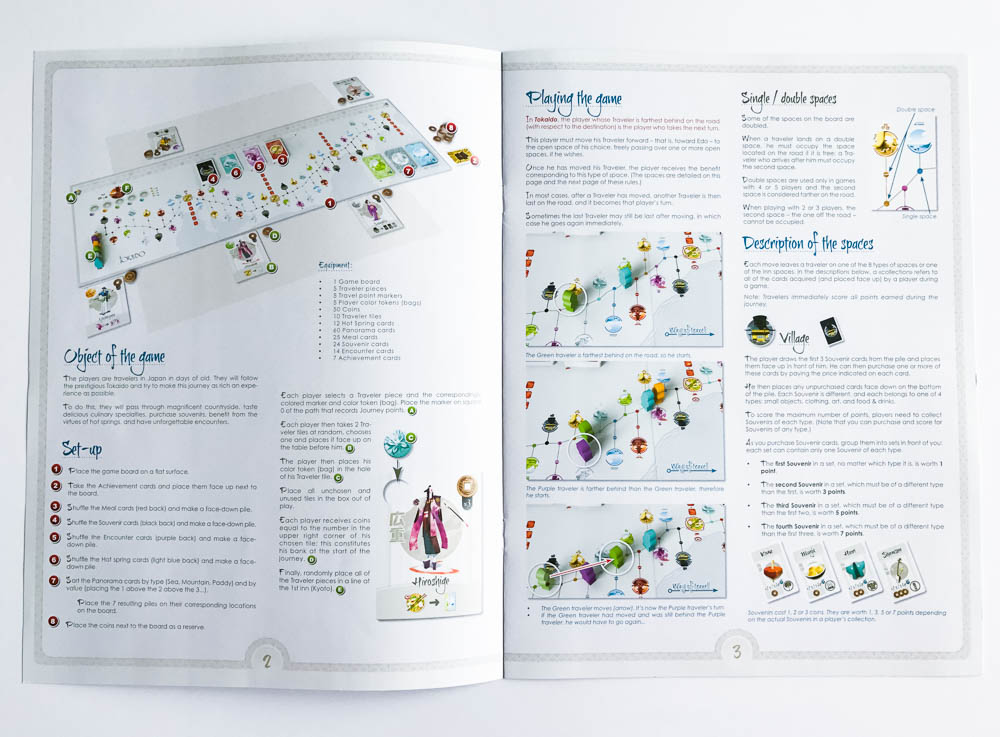 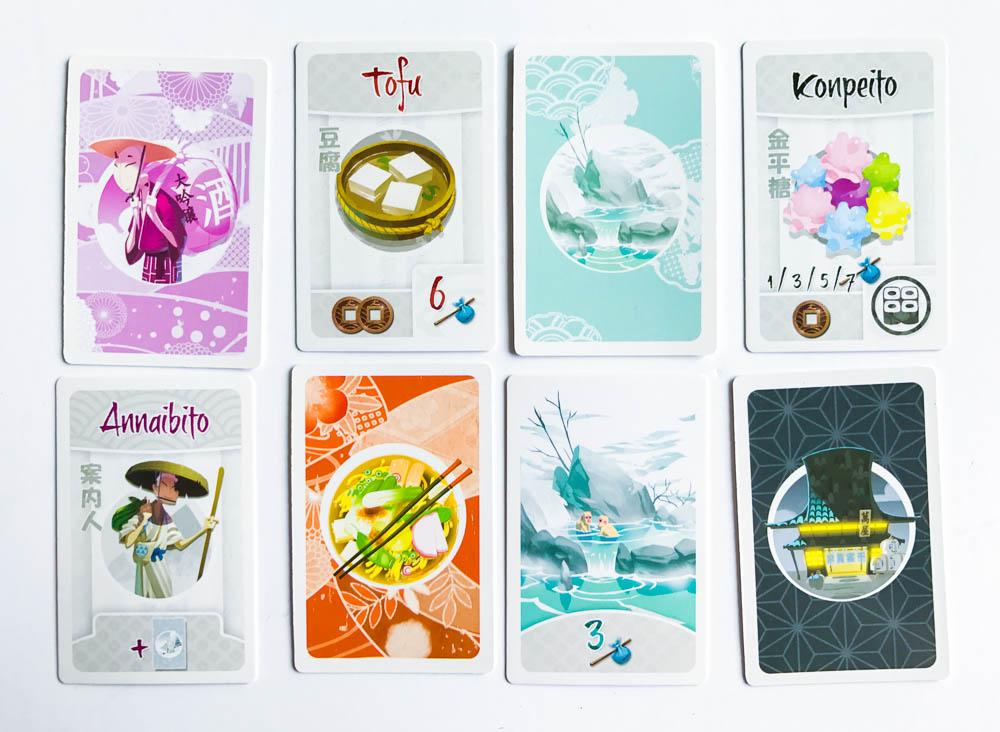 I lack the real experience of traveling to a faraway place and walking its historic trails. However, based on my understanding of the Japanese Tokaido, like an extraordinary vacation to a distant land, Tokaido replicates an ancient, tranquil excursion, exclusive to the tabletop.

Tokaido plays unlike many competitive board games. Here, instead of becoming the most glorious through bloodshed, or efficiently optimizing trade and resources, the victor is the one who leaves the table with the most fulfilling adventure. This player has met the most interesting fellow travelers, eaten the widest range of delicacies, seen the most beautiful of panoramas, and more.

In Tokaido, players will step into the shoes of one of nine or so travelers. Each traveler has variable abilities and will receive bonuses for visiting different spaces on the journey.

The journey itself is divided into five legs, each ending with a stopping point at an inn. Starting with the player furthest back in turn order, players will select a spot along the leg to stop. That player might stop at a souvenir shop to buy a shirt and snack. Each of these grants points, with the player working towards collecting a set of four. The next player might choose to stop and bathe at a hot spring, picking up two or three points. The following player chooses to visit a locale and receives a panorama card, granting a few points based on how many times he’s visited that location. 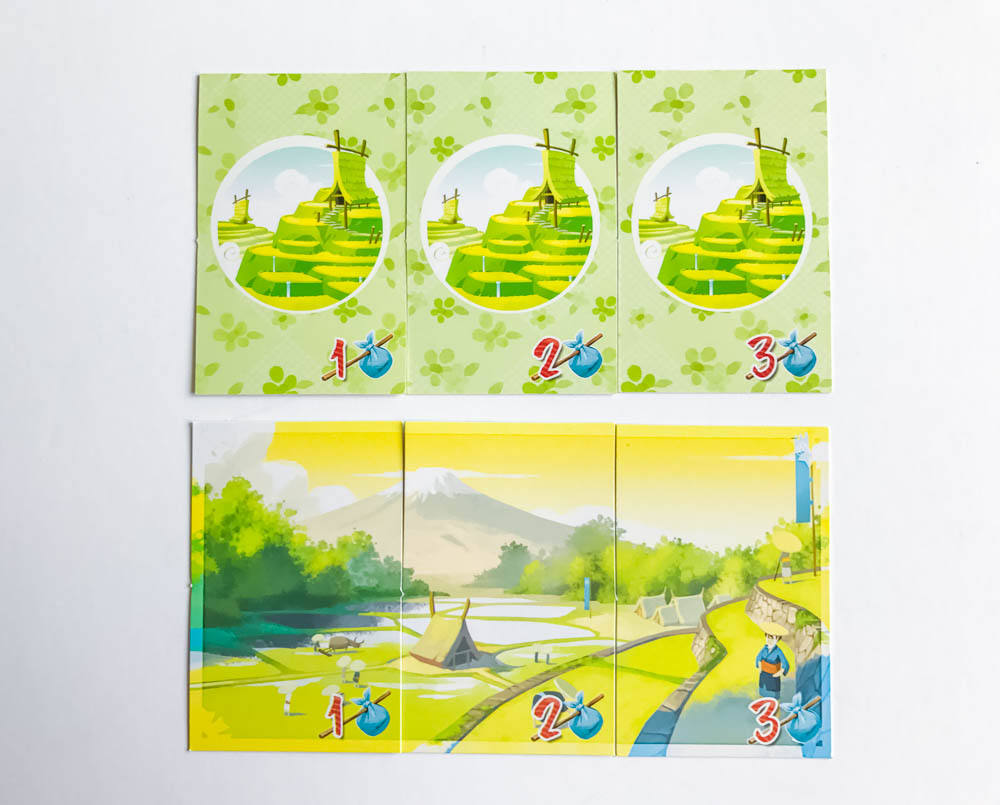 Every move in Tokaido pushes players into another experience. You might hope to be the first to visit each panorama and receive bonus points for doing so. The next time you play, you decide to meet the most travelers, while buying up all the souvenirs from shops. Tokaido allows players to define precisely what it is they hope to accomplish.

Locations on the board allow either one or two players to visit each space. Once each available location is filled, it will not be possible for another player to visit the spot again. Luckily, players will find many identical locations on future legs of the walk. One player might run ahead to block off the farm so other players cannot receive gold for food or souvenirs. While this might be a bit dastardly, that player misses out on visiting many different spaces. Depending on how far ahead they jumped, they might only get two actions, while others could have up to four or five.

Players take chances by running too far ahead of the group, but can mostly guarantee the action they hope for. In addition, the first player to arrive at the inn will choose their food first, potentially ruining another player’s chances to eat, forcing them to miss out on six victory points. 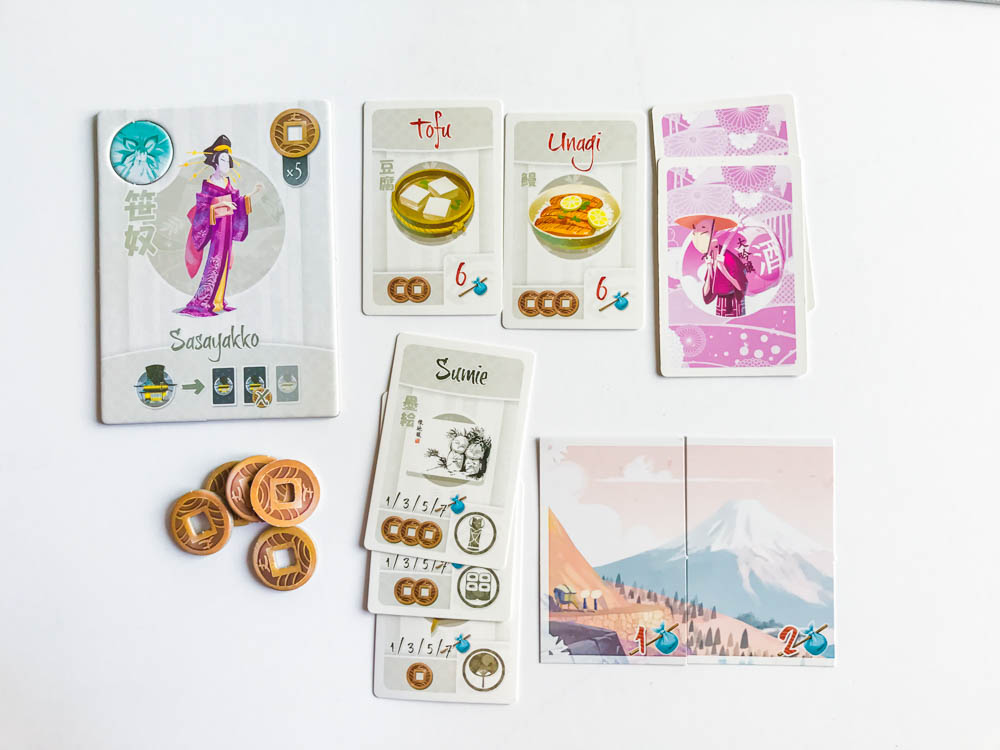 The simple mechanic of moving and choosing an action defies the norms for most popular tabletop games. At first, it’s a strange mechanism, where players misunderstand the value of each potential space. After a few games, players subtly slap each other by tactically positioning themselves in the inn, or making worse the outcome for another player by taking critical actions they needed.

Steeped in history, Tokaido ships with a wonderful rulebook. It details how to play, as well as reveals little bits of information about specific characters or cards, and how they correlate to ancient Japanese history.

In terms of presentation, Tokaido is, in short: beautiful.

Very few games distinguish themselves in such iconic fashion as Tokaido—a big white box with a splash of color. The board uses negative space to draw players into the simplicity of movement. Card art is essential to the design, charming and inviting players to fully embrace the sights and tastes of old Japanese cuisine and culture. Each player slots a lovely cardboard circle into their oversized character tableau. Players become their travelers, like the famous Tokaido painter, Hiroshige, or the old man, Hirotada. Each character carries flavor, beckoning the controller to utilize their special ability in order to most fully engross themselves on the tabletop. 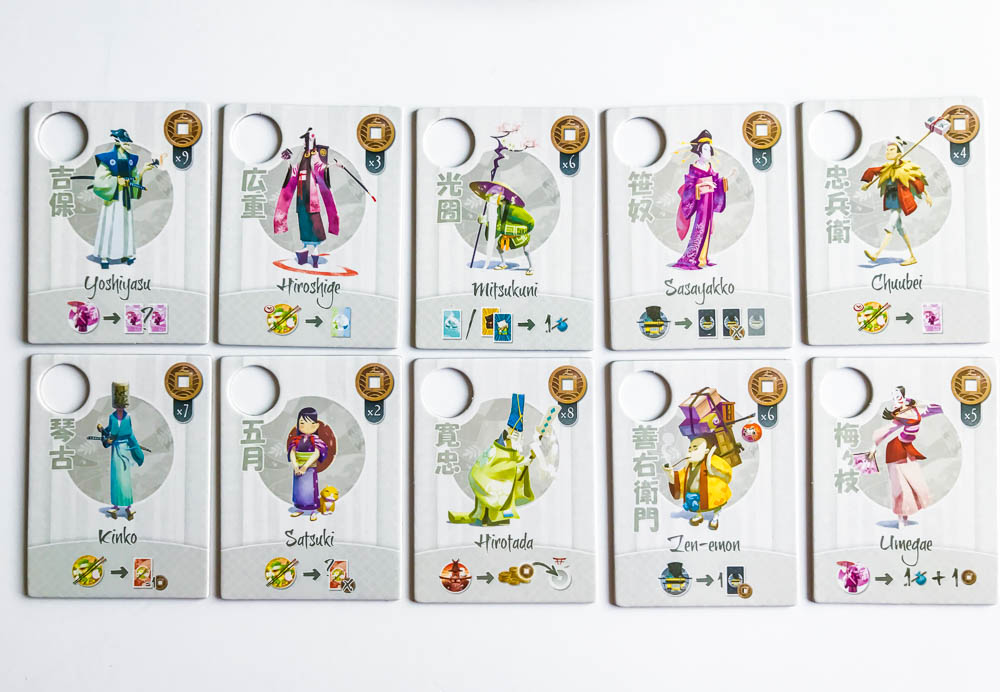 The host of characters you might choose to play as.

Since most spaces offer points, players move puny victory point chits along a track quite frequently. Instead of a simple score track around the board, FunForge opted for a track where players will bounce their marker up and down. Sure, it sounds cheesy, but each chit flows and bobs like the dynamic motion of ripples in a pond. It’s a simple graphic design choice, but moving your victory chit is satisfying, only adding extra polish to an already outstanding product.

While Tokaido is admittedly casual, FunForge has since printed two expansions to add complexity and variety: Crossroads and Matsuri. Both of these expansions sit in my game room and mock me for having not yet played them. My understanding is to add more decisions for players to make at the cost of losing some of the relaxed nature of Tokaido. Buyer beware, though I might get to review these at some point down the road.

Tokaido is nearly essential in most gaming collections. It covers all the bases with great presentation, interesting gameplay, and room for increased complexity with available expansions.

If you want to play before you buy, rest assured, this one won’t fall out of print any time soon, so you have ample time to find a friend or game store with a copy to try out. 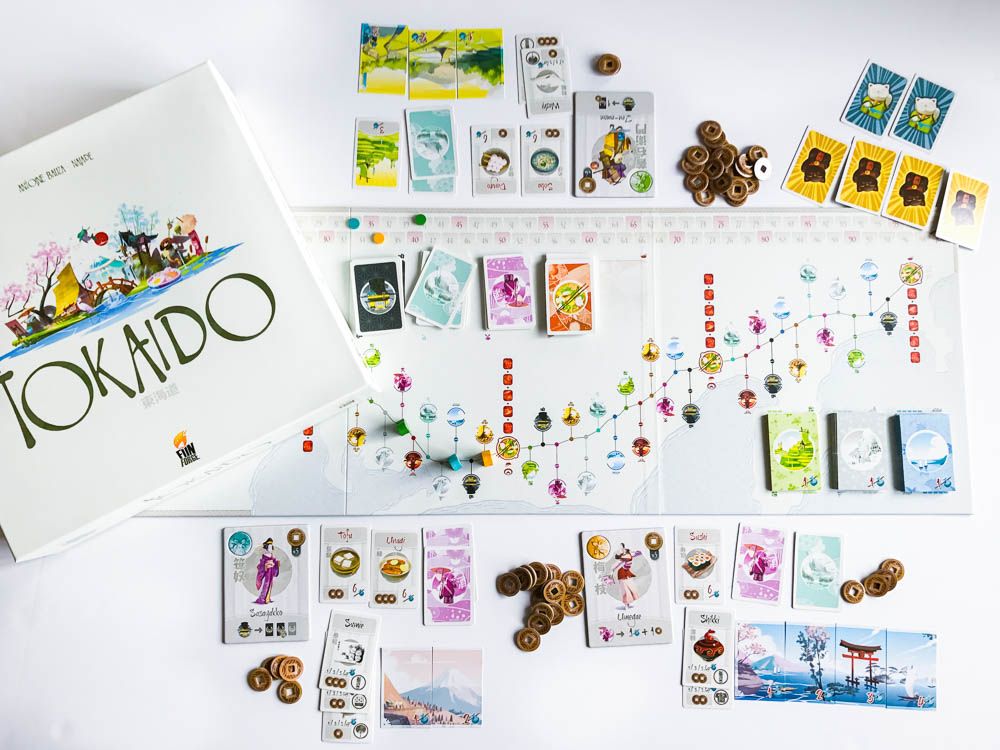 Tokaido is a beautiful game, leaving players feeling more relaxed than competitive. While extremely simple to learn and play, some may need a few practice rounds to understand gameplay and mechanics.