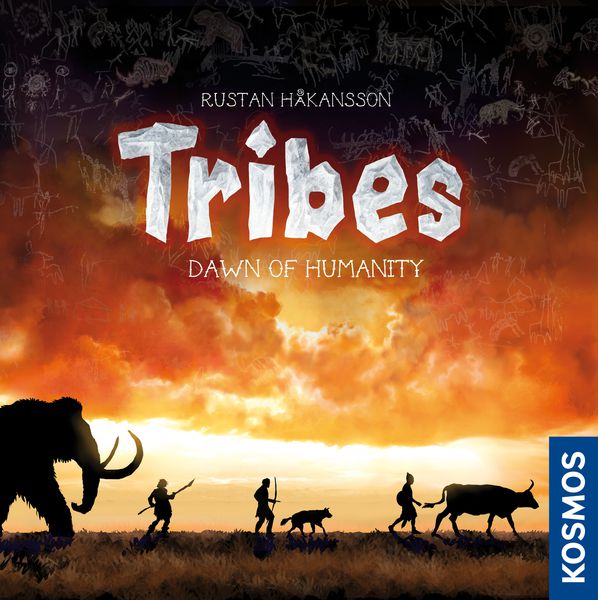 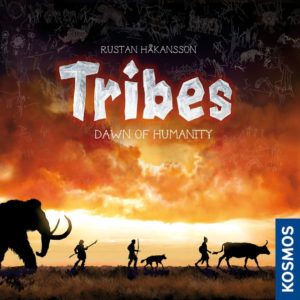 Tribes: Dawn of Humanity is a family-weight euro game of action selection. Over the course of 3 prehistoric ages, players compete to accomplish objectives quickly, but strategically. It is an enjoyable game for all ages.

When it comes to euro games, there is a very specific kind that I like – namely, games with “classic simplicity.” Usually designed by Kramer, Kiesling, Knizia, or other Germans with “K” names, these games are light on rules and heavy on fun.

Tribes: Dawn of Humanity is one of these games, despite the fact that its designer does not have a “K” name. In this game, players take turns executing actions as they develop ancient civilizations.

Each player begins with a personal tableau of 3 randomly-drawn hex tiles, representing different types of land. Each tableau also starts with a worker on a tile of the player’s choice. The main board has 3 rows of square tiles, representing innovations throughout the game’s 3 ages. On the left side of the board are tracks which dictate how “good” players are at the various actions. 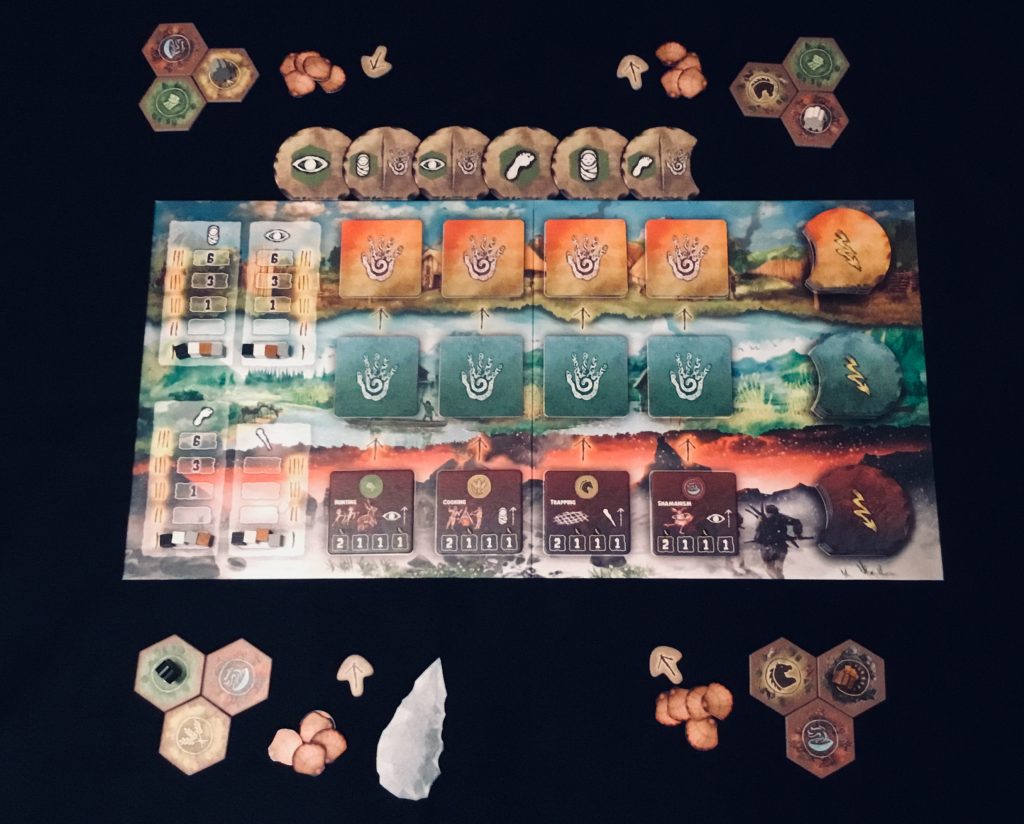 The goal of the game is to earn the most points, and this is primarily done by accomplishing objectives on the central tiles. On a player’s turn, he/she selects an action from the row of action tiles.

The leftmost action is free to take, but if he/she wishes to take a different one, he/she must place a seashell token on each tile to the left of it. For example:

Here, since the player chose the the second action in the line, he must place a seashell on the tile before it. If a player takes an action tile with seashells on it, he/she earns them for him/herself.

The chosen action is executed, and the tile is then moved to the end of the row. The possible actions include:

The number of times an action can be executed depends upon how far the player has advanced up the corresponding track on the main board. As the game progresses, players will be able to do more and more with their chosen actions.

Some action tiles offer players the chance to complete an objective, instead of using their normal ability. If a player chooses, he/she can use a tile showing the handprint icon to fulfill an objective. To do this, he/she must meet the criteria shown on a tile on the main board – this involves having 1, 2, or 3 workers on different spaces of a certain type of land. 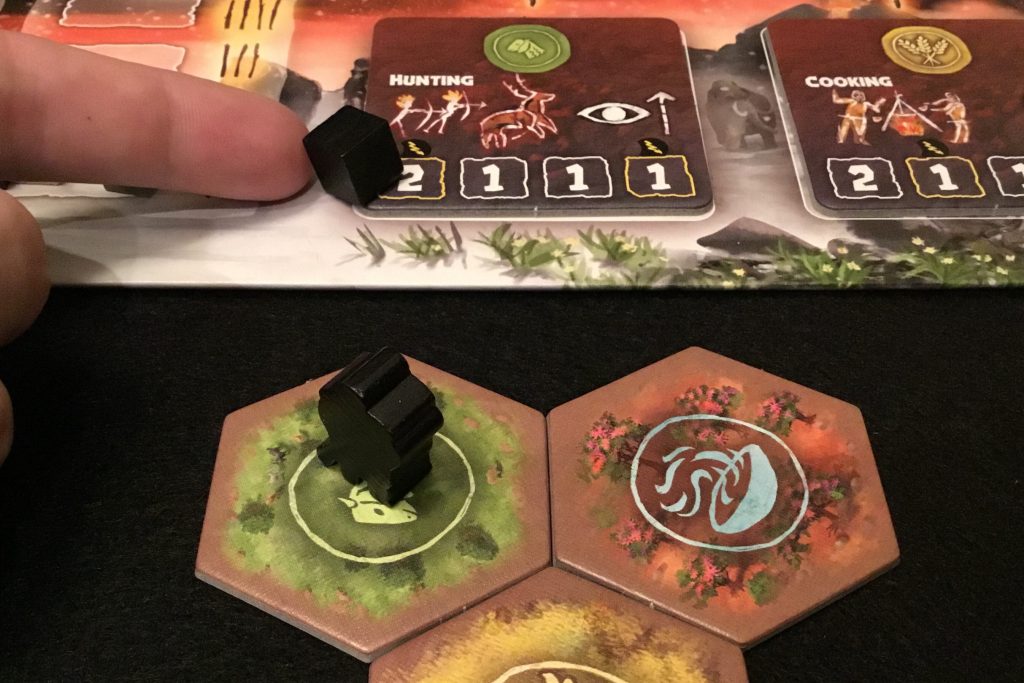 In the illustration above, the player has a worker on a green hex space. Thus, he meets the listed criteria for an Age 1 objective tile, and can place one of his cubes there to mark this (doing so also scores him points).

Notice that some objective spaces have a lightning bolt icon above them. When a cube is placed in such a space, a special action tile is drawn and added to the end of the row.

Some special actions are good, and others are bad. It’s interesting, because players will often want to pass over bad actions, but like always, they have to pay a seashell to do so. This means that bad actions can start to look good as they accumulate lots of shells. (Unlike regular action tiles, special actions are “one and done,” being discarded after use.)

When someone places a cube on an objective tile, the tile directly directly above it is revealed. Objectives in Ages 2 and 3 are worth increasingly more points, but players must resolve them in order, up the column. Everyone has an arrow token, which can be used to “cross columns,” but objectives must always be resolved in order: Age 1, Age 2, and Age 3. 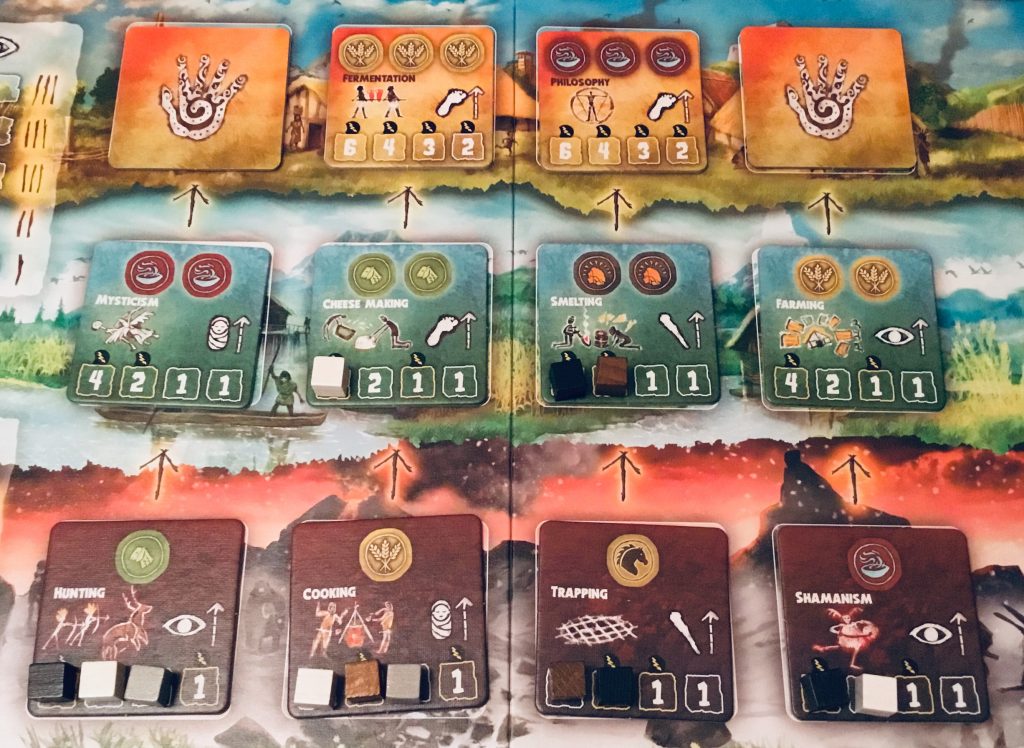 The game ends when a number of Age 3 special actions have been resolved. At this time, a few endgame bonuses are awarded, and the player with most points is the winner!

Tribes: Dawn of Humanity feels like an old-school-classic euro, just the kind I enjoy. Unlike the overcomplicated slogs that seem so prevalent today, this game is clean and straightforward. It scales well, but it really seems to shine as a 3- or 4-player experience.

The game looks nice on the table, even though it is mostly just tokens and tiles. The illustrations are attractive and they help establish the prehistoric theme. It would have been nice if the seashells had been real ones, but the cardboard bits work just fine. The detailed cavemen meeples are great, as well. 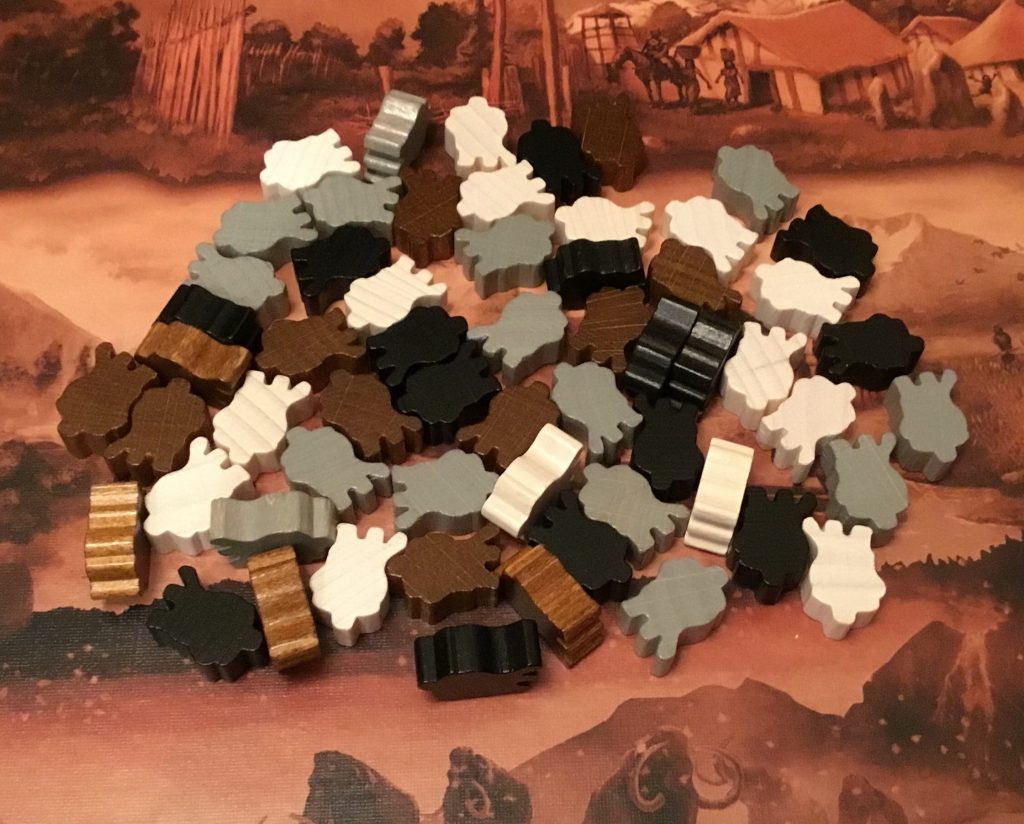 One interesting nuance to this game is the importance of collecting seashells. Much like the chips in the popular game No Thanks!, running out of shells in this game can be very, very bad. I have seen a few instances where someone had none left, so the other players were able to strategically manipulate the action tiles to ensure that this player got stuck with something unhelpful.

The strategy in Tribes is not brain-burning, but it definitely has its subtleties. The rules are clearly written, and the game itself is easy to understand. Clocking in at about 15 minutes per player, it does not overstay its welcome. Tribes: Dawn of Humanity is a good choice for a “next-step” game experience, and I recommend checking it out.

I enjoyed Tribes. Yet another strong offering from KOSMOS.