In 2017, Cat Lady became a surprise hit for AEG, and for good reason. I love a fast, interesting card game, and after that, so did AEG. They followed up Cat Lady with Point Salad from new design trio Molly Johnson, Robert Melvin, and Shawn Stankewich. Point Salad earned some industry awards, and I find it quite a good game as well. Now, the Point Salad trio is back with AEG’s third small box card drafting game: Truffle Shuffle. They can’t all be good, can they? Let’s take a look! 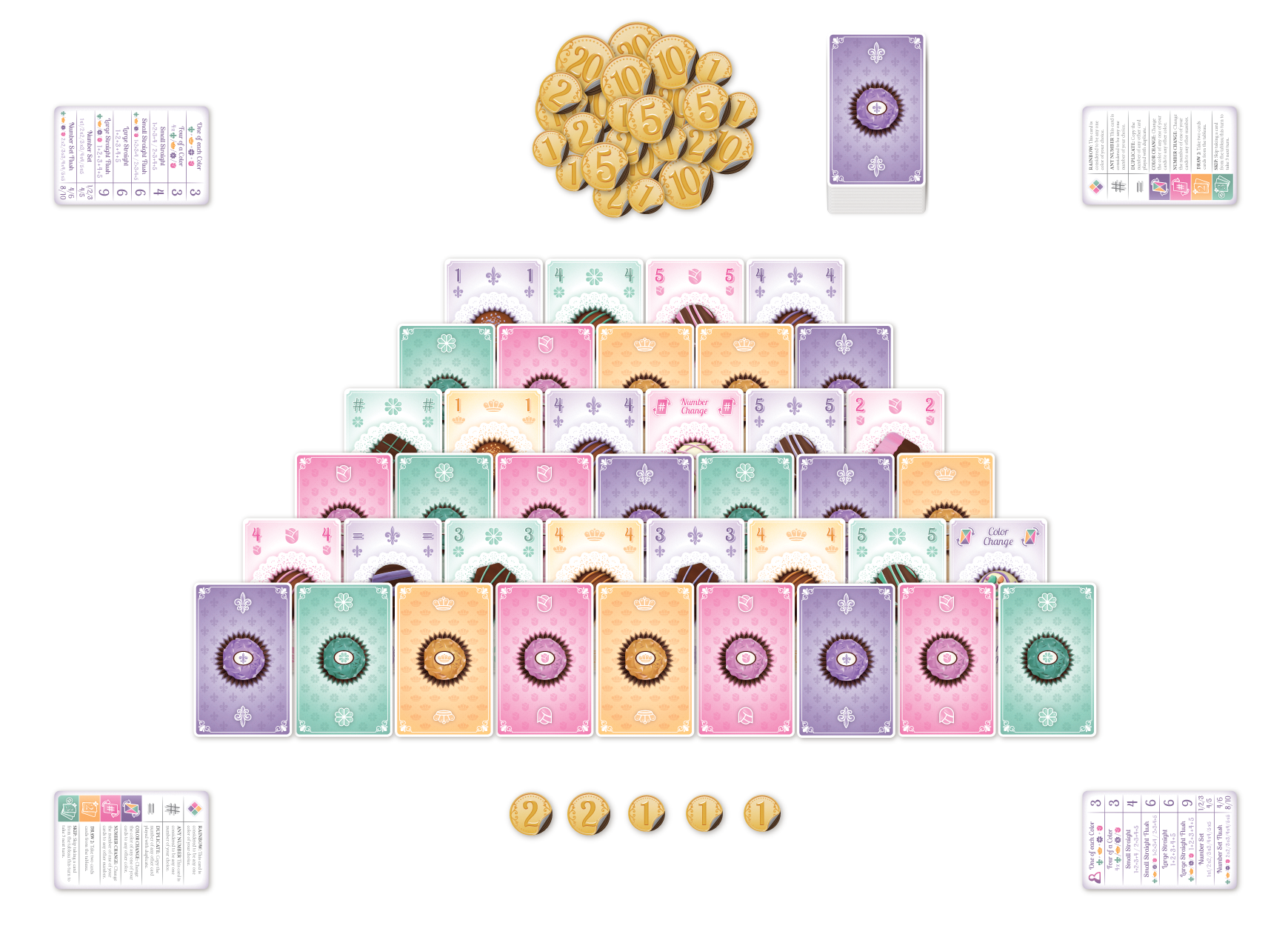 First off, let me just say that this game is gorgeous. Since the cards really only need a color and a number for the most part, rather than make fairly standard-looking cards, they went out of their way to make this game look as elegantly beautiful as possible. I honestly can’t think of a single other small box card game that looks this good.

So the cards look great, so do the tokens, and there’s a scorepad, and… player aids. Player aids are never a bad thing to have in a game, but they’re a necessity here because someone got a little carried away when designing this game. Give me a minute and we’ll get back to that.

Let’s be blunt: at its heart, this game is a ripoff of 7 Wonders: Duel. Just as Phil Walker-Harding compressed 7 Wonders into a quick family game with Sushi Go!, this trio has taken the main drafting mechanism of Duel, a pyramid of face-up and face-down cards, and made that pretty much the whole game. There are certainly some small innovations, however. Different color cards have different backs, so while these cards are never revealed face-up in the display unlike in Duel, you at least have partial information. Also, there are some interesting new cards, such as a “Take Two” card and a “Skip” card that lets you pass the turn and then take three cards (!) on the next turn. Duel requires a whole expansion to really get at ways to manipulate the drafting rhythm, while Truffle Shuffle does it smoothly with just a couple of cards.

However, for as clever as they were with the drafting system, they really botched it with the scoring. A game about collecting colors and numbers shouldn’t have fifteen different ways to play a set to score points. That’s absolutely ridiculous, and honestly makes it look like the game had no developer or editor whittling things down. Yes, they’re mostly redundant, but this could have been written out so much more simply. You won’t get a one-to-one match of scoring scale, but you could get close enough with something as simple as this, and I’m just spitballing:

Instead, there’s this giant player aid of different ways to score, and it feels like a mess. While this game can and should be accessible to elementary school kids, it was a struggle for my 6 year old to determine what exactly she wanted in her hand beyond the same colors and the same numbers. There’s a significant hand management element: knowing when to lay some cards and give up on a bigger set because the round is close to ending and you’ll have to discard, for example. Sure, adults are going to be better at those kinds of decisions, but my daughter was worse at them than she needed to be, because the game is unnecessarily obtuse. I don’t really think adults are going to have too much trouble with the scoring, but it’s still going to be a shellshock when they first look at that player aid until I explain that it’s basically the same thing listed over and over in the worst way possible.

While the scoring in this game makes me incredibly grumpy, everything else about the game is fairly clever and tightly designed, even if wholly unoriginal. And it’s gorgeous, too. It has a lot going for it and I’m happy to play it, but I also haven’t mentioned the other problem besides the scoring: AEG’s own Point Salad is just as good and Cat Lady is superior to both. How many card draft games do I need? If your answer is “all of them,” okay, then pick this one up.

Thank you to AEG for providing a review copy of Truffle Shuffle.

Truffle Shuffle is a gorgeous light card drafting game in the same vein as Point Salad and Cat Lady.