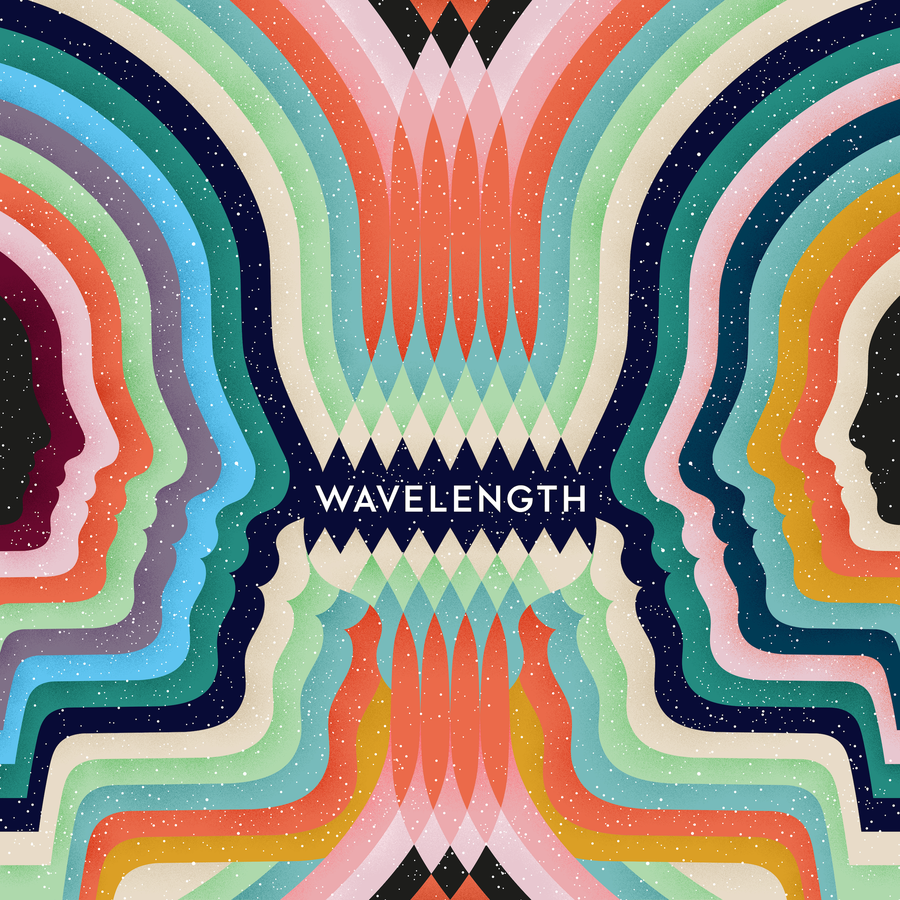 Wavelength is a new party game that feels like a spiritual sibling of TrapWords, Decrypto, and Codenames. Like those games, Wavelength is played in two teams. Each turn, one player from the active team becomes the clue-giver and tries to get their teammates to guess where a specific thing ranks on a spectrum of two extremes. It is a bizarre game, but it is hysterically fun.

Wavelength is a strange specimen, from its trippy cover art to its eye-catching toy-mechanism to its very gameplay premise. This team-vs.-team game challenges players to guess where specific things rank on abstract spectra of opposite extremes.

The goal of the game is to be the first team to reach ten points. The game uses a cool contraption with a rotating wheel, a shield to conceal it, and a dial to point to a specific spot on the spectrum. 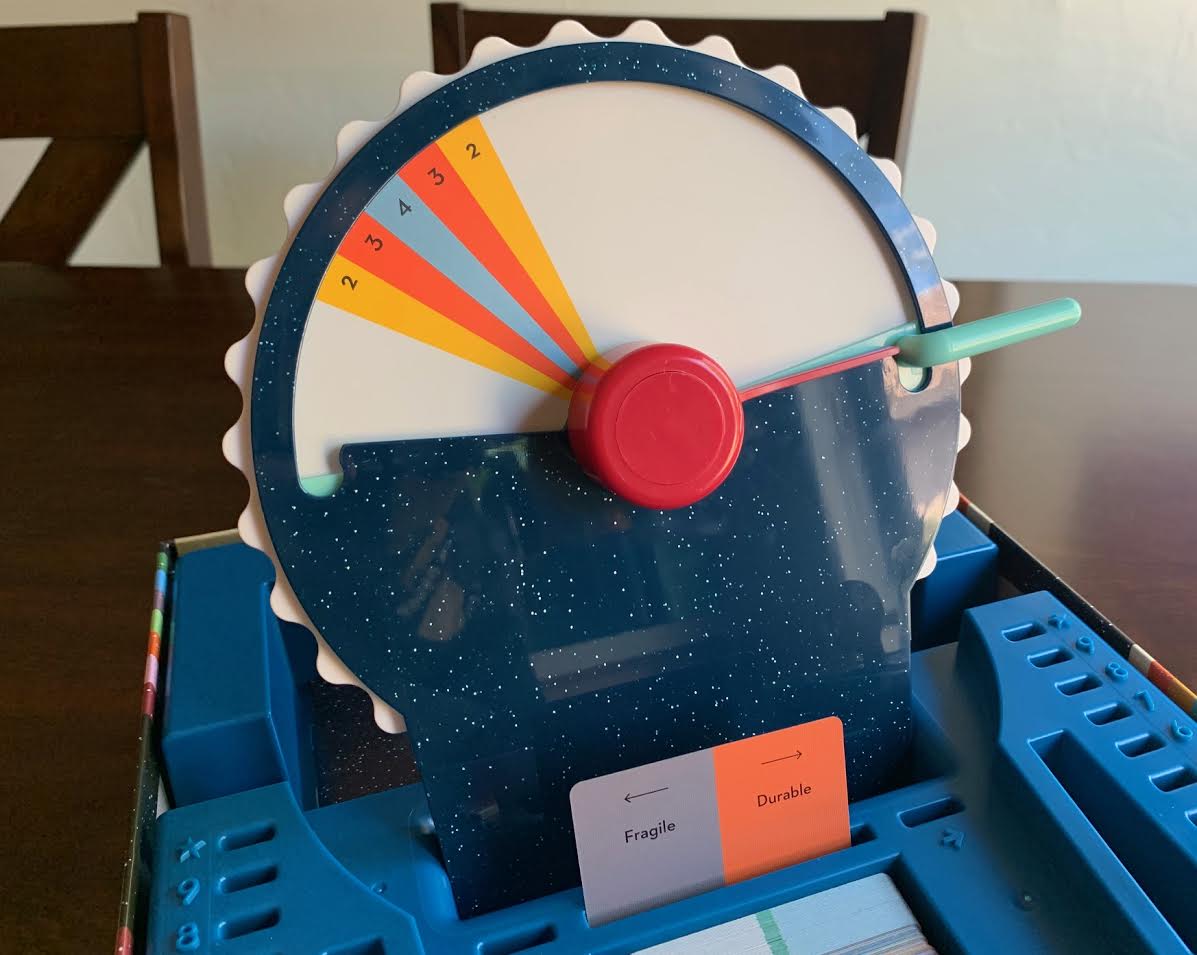 Per the text on the card, the spectrum this round is Fragile <—> Durable.

Each turn, the active team chooses a clue-giver, and that player takes the device, closes the shield, and rotates the wheel to randomize it. They also draw a card and place it in the designated slot. The card determines the “subject” of the round.

Once the wheel has been randomized, the clue-giver opens the shield so that only they can see inside. Somewhere in the window, there will be a series of pie-wedges worth two, three, or four points. The clue-giver’s goal is to get their teammates to set the dial on the spot where the pie wedges reside… without being able to see them, of course.

When the clue-giver is ready, they close the shield, say their hint out loud, and their teammates turn the dial to the spot they believe to be appropriate for the subject and clue. This sounds wonky – and it is – but here is an example: 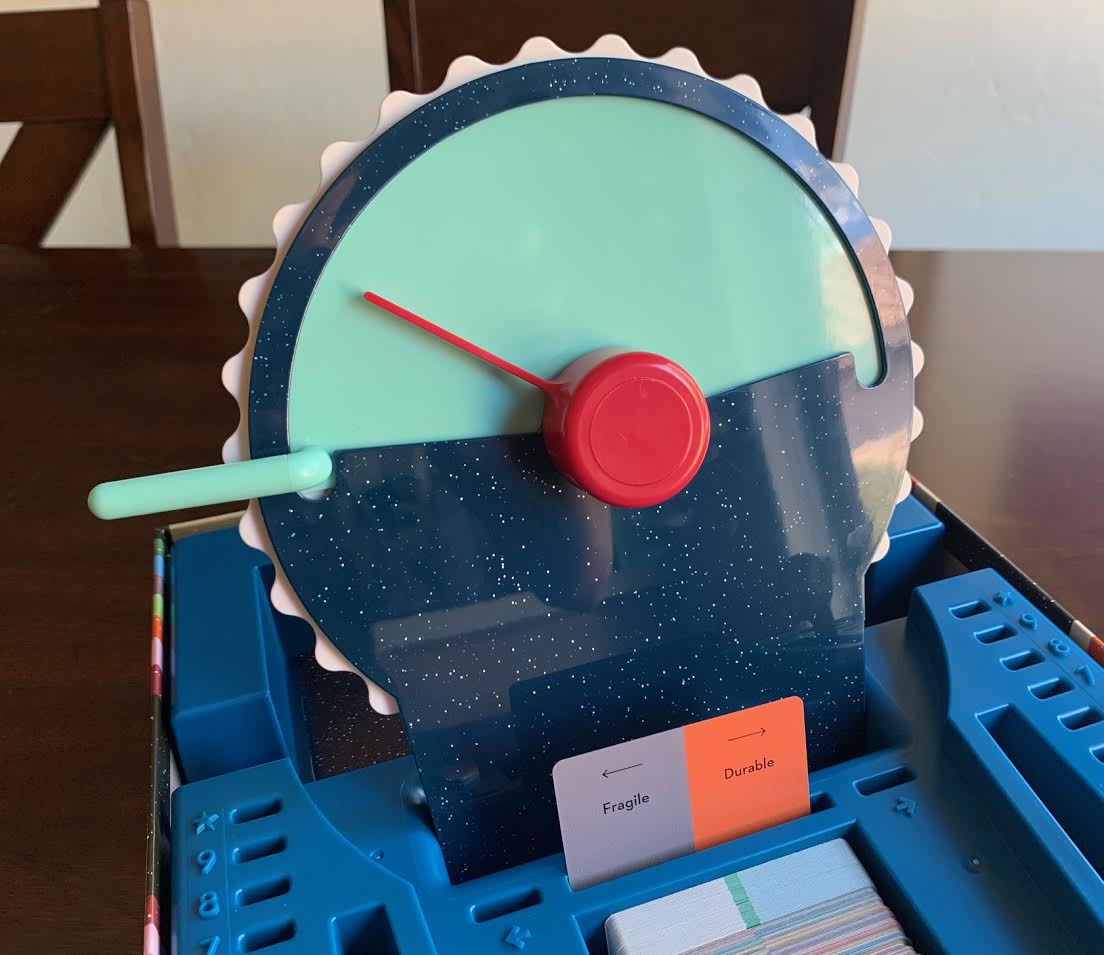 Suppose the clue was “ice sculpture.” Players would then deliberate where and how far to rotate the dial. Their conversation might go something like this:

When the players have agreed upon where to set the dial, the opposing team gets a chance to guess where the four-point pie wedge is in relation to the dial – to the left or the right of it. If they are correct, they will earn one point.

Once everyone is ready, the shield is removed to reveal the result… 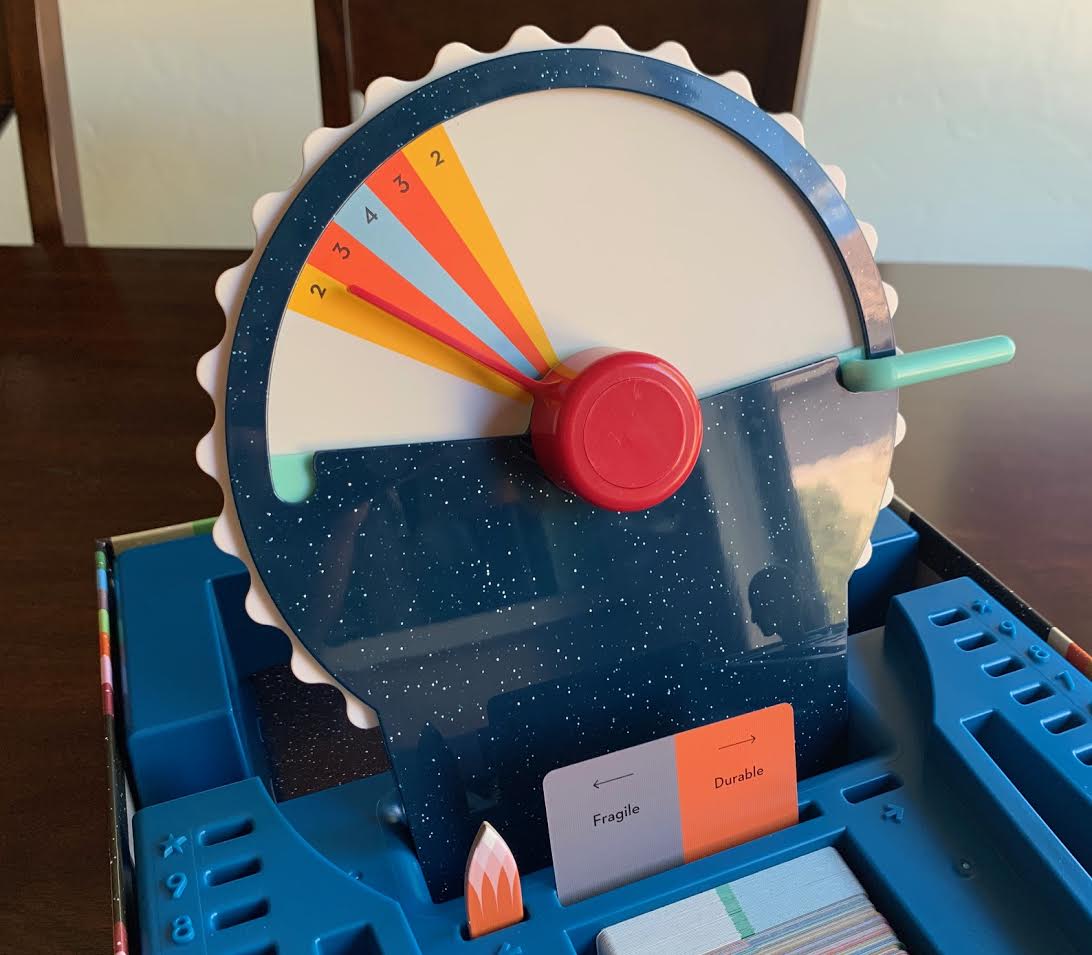 In this example, the active team earns three points, because the dial is on the “3” spot. (If it straddles two numbers like it does above, the team gets the higher number of points.) The opposing team had guessed that the “4” would be to the left of the dial, as indicated by the upright token next to the card. This was incorrect, however, so they earn nothing.

Play continues back and forth like this until a team reaches ten points; when this happens, that team wins!

Designer Wolfgang Warsch is truly a wunderkind. It seems like his games are always bizarre, addictive, and hilarious, and Wavelength is no exception. This game is weeeeird, but in the best way.

I always enjoy games that involve group psychology, but I have never played one quite like this. It’s really a fascinating experience; the notion of determining where something fits on an abstract spectrum is really compelling, and it leads to interesting dialogue at the table. Like other games in this genre, giving clues can be quite challenging, but this is part of what makes the game fun.

In addition the basic cards, the box includes a set of “advanced” cards. Some of these are quite challenging, such as “Tick <—> Tock.” In the context of this game, I’m not even sure what that means, but it would definitely allow for some creative clue-giving. The game also offers a co-op mode, which works especially well with smaller groups.

Wavelength‘s production quality is off the charts. Obviously, the wheel/dial contraption steals the show; it’s a blast to play with, and it works really well. The box insert is super-sturdy plastic, which helps to make the whole product feel high-quality.

If you enjoy games like Codenames, Decrypto, or TrapWords, you will LOVE Wavelength. Even if you don’t, though, this one is still worth a try, just because of how radically different it is from any other game out there. Wavelength gets a major recommendation from me. Don’t miss this one.

Wavelength is a fantastic party game. If you like games like Codenames, Decrypto, or TrapWords, you will LOVE this one. Highly recommended.