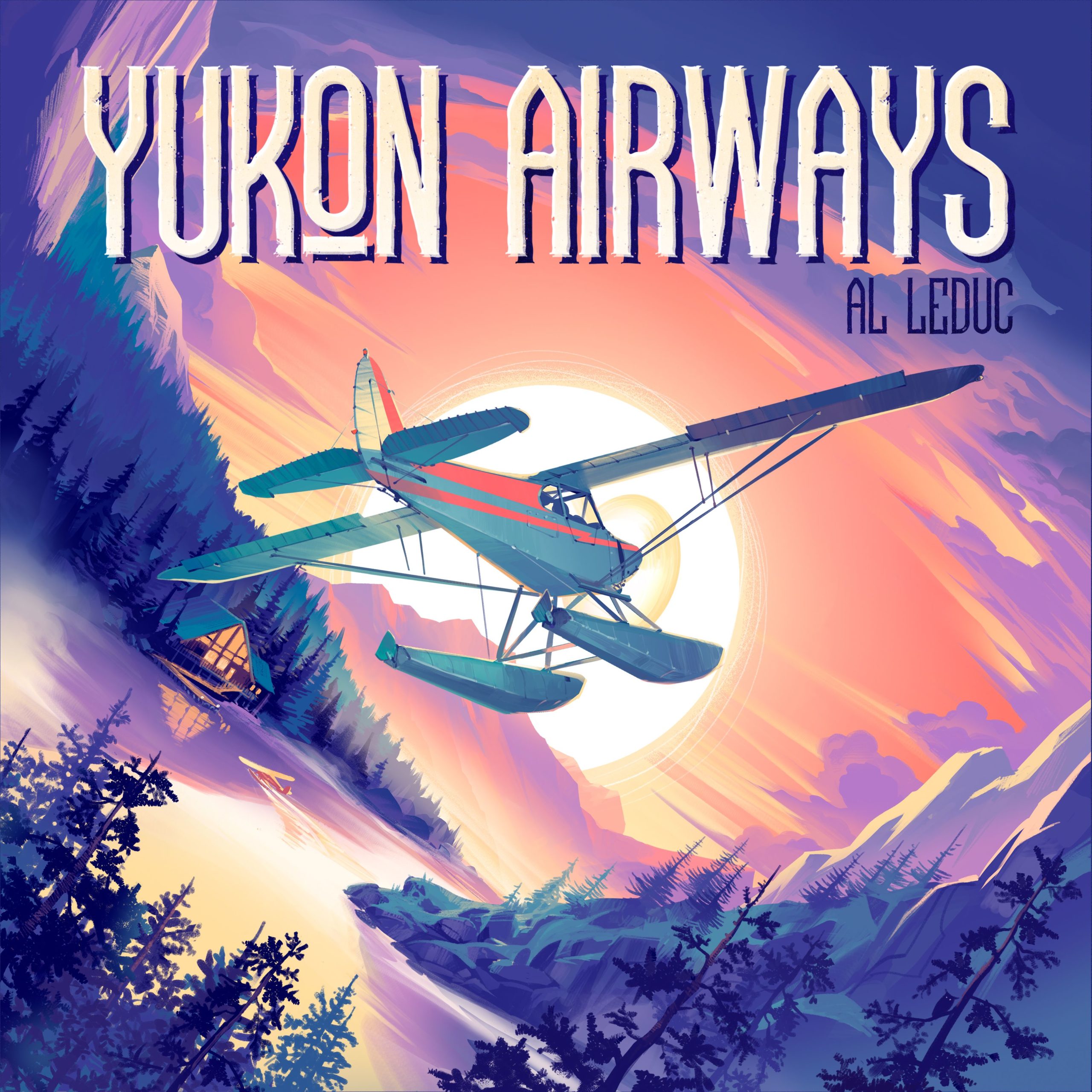 With all the board games about trading in the Mediterranean, it’s easy to forget that the world is a vast and lovely place, full of many different regions to explore. Designer Al Leduc invites us to pilot our own seaplane in the Yukon, by drafting dice, playing cards, collecting cubes, and upgrading our plane several times per day. That’s how the pros do it, right?

There’s some really cool stuff in this box, whether you start with the components or the front of the rulebook. In the rulebook, designer Al Leduc goes to great length to discuss his personal connection to the theme, and while pick-up-and-deliver is fairly common, I don’t know too many other games about this area of the world. My own family went on a wonderful family vacation fifteen years ago to Alaska, which included a jeep tour of the Yukon, so I also really enjoyed seeing places I recognized.

Meanwhile, the components for this game are very stylish and pretty. I love the color schemes, particularly the pink dice and the light blue on the board. The player boards are very thematic, though I found the dials were a bit of a pain both to assemble and use, and kept the boards from laying 100% flat. Considering the amount of stuff in the box, the $49.99 MSRP is very nice, especially when most “big” board games are selling for $60 or more these days. 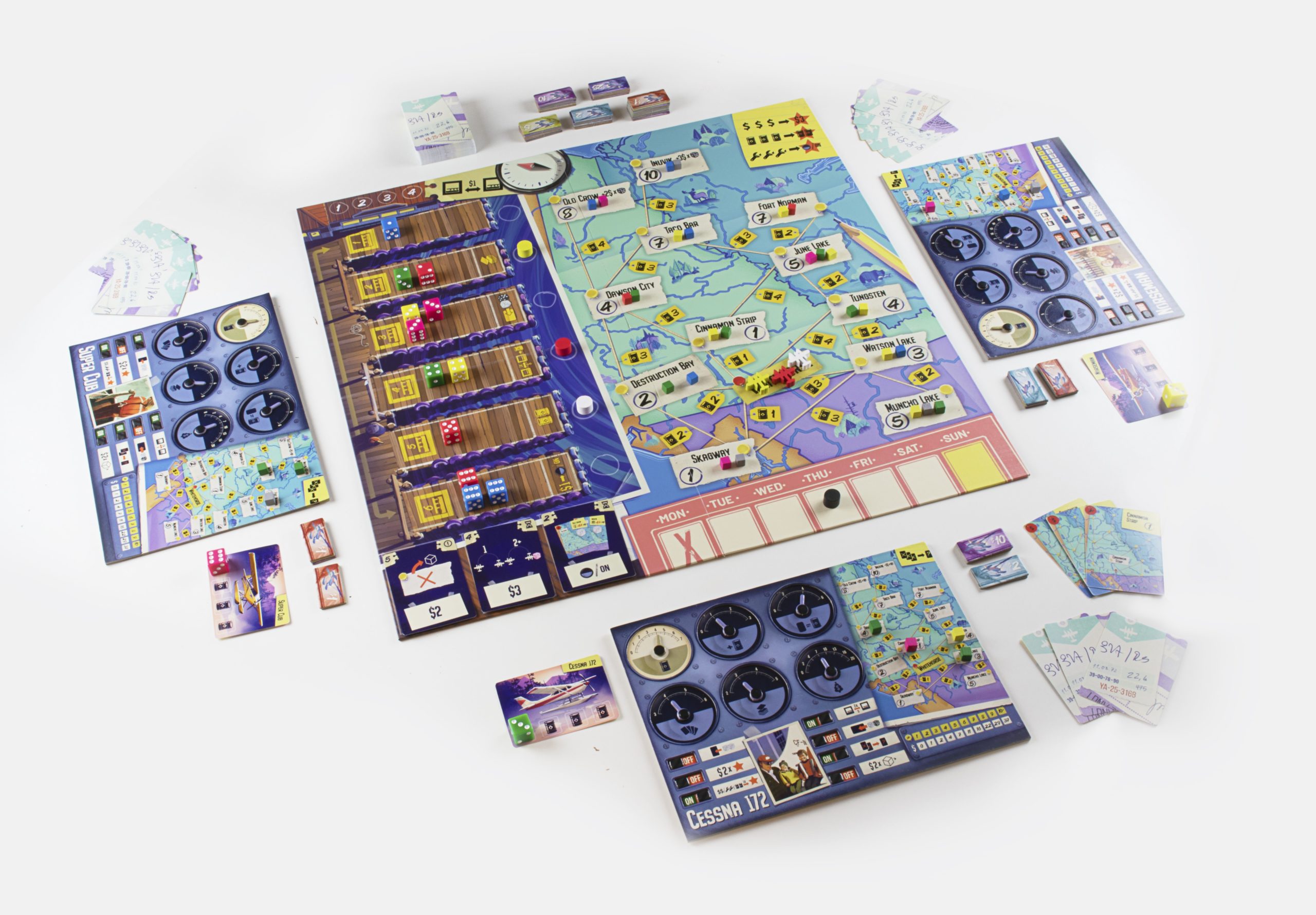 Yukon Airways is definitely its own beast, but many parts of the design are reminiscient of other games. Like The Voyages of Marco Polo, you are trying to visit as many cities as possible, and using dice (though in a different way). Like Ticket to Ride, you’re discarding certain cards to make that travel happen. Like many engine builders or strategy games in general, you are starting with limited abilities and upgrading them as you go. There’s a lot of different cogs turning at once. Fortunately, the theme actually works really well to connect the mechanisms: you are taking passengers (dice) from gates to deliver them on your own plane via destination tickets (cards) to get the goods they want (cubes). Sure, it’s still a Eurogame, but it puts more effort into the theme than many others.

Due to all the interconnected parts, turns require extensive planning. If you are someone who likes to go into the first play of a new game with an attitude of “eh, I’ll just try something and see what happens,” you’ll get crushed and probably be a little frustrated. For example, right off the bat, the game threatens to force you to discard most of your hand at the end of Day 1 if you don’t play a lot of cards or get some upgrades. I’m certainly up for going deep into the think tank during a game, but for us this game walked a fine line between delicious turn against and crippling analysis paralysis. But it was really more like: we’d figure everything out, and then remember yet another rule that we forgot, and have to think through the whole thing again.

In fact, the strangest thing about Yukon Airways is that we had such difficulty with it. We had to constantly reference the rulebook, but we also just kept forgetting to do things and having to double check ourselves. Sure, that’ll go away with repeated plays, but I didn’t find the design of the game to be “smooth” at all. It feels like way too many ideas (Dice! Cards! Cubes! Dials!) smushed together, yet I’ve seen just as much blended into other advanced strategy games that gave us far fewer issues. After a fair amount of post-game discussion we were able to suss out what’s different with this one.

In other “Kennerspiel”-level games we enjoy, there might be a variety of options for your turn, but the actual structure of a turn is fairly simple. In The Voyages of Marco Polo, you’re gonna assign some dice to a place on the board. In Castles of Burgundy, you’re going to do 1 of 4 things with your two dice. In Yukon Airways, the structure of one round of gameplay has 4 phases, and they each have 4 or 5 different parts themselves. There are a ton of small rules to remember, and it’s difficult to remember when to reference those small rules.

Some of the rules also seem flat out unnecessary. For example, towards the end of the turn, each player gets $1 per dice they assigned to cards this turn (in addition to $ for their most expensive flight, bonuses, drawing/discarding cards…). With each player assigning between 1-4 cards each turn, that’s not going to have much of a differential in the scores, especially when scores easily break $100. Why even have this rule? (While we’re at it, why even have a dial that restricts hand size?) The game could have been pared down quite a bit without losing much.

And lastly, the rules are poorly delivered. There are several ambiguously worded sentences in the rulebook. The player aids are also vague and missing far too much information: the player aid that shows the various phases is missing a phase (!!), and the 20 or so different combinations of icons shown on the player boards and the central board are listed in the rulebook, but not on any player aids. Several of them also look far too similar (e.g. the switch for two dice on one destination ticket, and the switch for taking two colors of dice from one gate).

Basically, my two complaints are that the turn structure is too complicated, and that the assistance with the game (rulebook, player aids) are subpar. Both could have been vastly improved with some more serious editing, and we’d have a real potential hit here. In the meantime, Yukon Airways is a fairly good game, maybe even a great game, but you have to wade through quite a bit to find the greatness. Here’s to hoping for a refined second edition.

Thank you to Asmodee North America for providing a review copy of Yukon Airways.

Despite the complicated turns and occasionally vague rules, Yukon Airways is a good game with a nicely integrated theme.