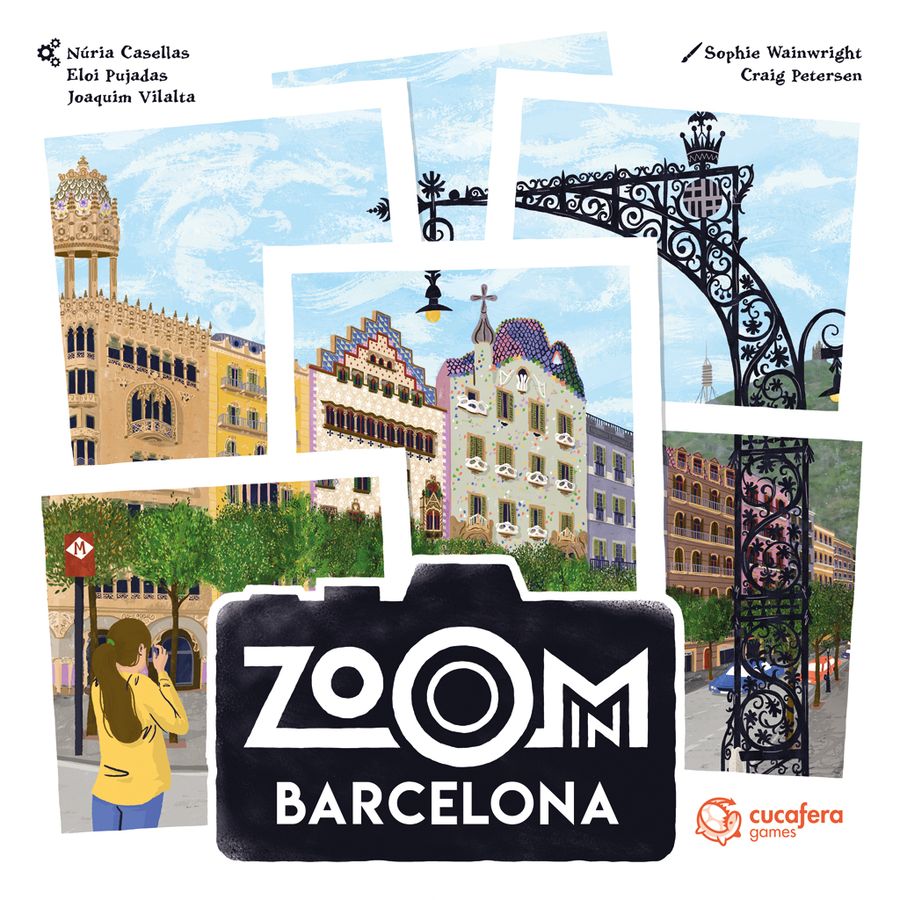 Zoom In Barcelona is a photography expedition right on your tabletop. In this game, 2-6 players travel around the city of Barcelona snapping pictures of famous landmarks and trying to earn the most points. Ready for adventure? Grab your camera and let’s go!

In Zoom In Barcelona, players are shutterbugs capturing the beautiful sights of coastal Spain. The goal of the game is to earn the most points, and players accomplish this by traveling about the city taking photos of famous landmarks and the urban skyline.

The game is played on a central board divided into colored districts and connected by travel routes. Each player begins in a designated space on the board, as shown on their player tableau.

On a player’s turn, they move and take an action. When moving, the player can either walk their pawn up to 2 spaces or use a transportation card to move farther (3-6 spaces, depending upon the card). Transportation cards are single-use—when spent, they are gone.

Depending upon where the player ends up, they may either take a photo, visit an information point, or ride the Metro.

Taking a photo is the main action. Photos can capture landmarks, city skyline buildings, natural light locations, or the dragon. (Yes, there is a dragon in this game. As it happens, the real-life city of Barcelona has dragon motifs all over its art and architecture.)

To take a landmark picture, the player must stop on a space shown on a card in the tableau. The player then collects that card.

To take a skyline building picture, the player must end on a skyline space—there is 1 in each district. The player then takes a token of that building. There are fewer tokens of each building than the number of players, so getting them quickly can be important.

When using the full game rules, players must also visit natural light locations during the game. These 4 spaces represent taking pictures at different times of day. Their specific locations are shown on cards below the board, and they must be visited in order from left to right. Natural light locations are vitally important, because they allow players to score their landmark photos at the end of the game. Each natural light space allows the player to score 2 pictures. This means that if a player visited 3 of the 4 locations during the game, they could score 6 photos at the end; any beyond these 6 would be worthless.

If a player lands on the dragon’s space, they can perform a free action, taking either a landmark token or skyline photo, advancing on the natural light track, or sweeping the tableau of landmark cards and drawing new ones. The dragon is then moved to a new dragon space.

If a player lands on an information space, they can refill their hand to 3 transportation cards. Alternatively, if they land on a Metro space, they can ride the train to any other Metro space. Both of these actions happen in place of taking a picture.

The game ends when someone takes their 8th landmark photo. At this time, players determine their scores. Each landmark card is worth a base of 3 points but may be worth up to 5 depending upon the features on the card. However, the player can only score as many landmarks as their position on the natural light track allows! Additionally, the skyline building tokens are worth points according to private objectives dealt out during setup. The player with the most points wins!

There is a lot that I like about Zoom In Barcelona. For one thing, the theme really appeals to me. I can only think of a handful of other photography games out there, and I like this one more than any of them. Playing this game feels like going on a sightseeing adventure, camera in hand. It’s light, fast, and relaxing.

The main mechanisms of this game are point-to-point movement and set collection, both of which are simple for newcomers to grasp. It also offers 2 rulesets, beginner and advanced, so folks can ease into the experience. Players must tactically consider their options each turn, balancing them with a bit of strategy (e.g. when to spend transportation cards, how to craft a route around natural light locations, etc.). Without a doubt, there is some card luck in this game, but players typically have meaningful options even when the cards are finicky.

The production of Zoom In Barcelona is vibrant and colorful. Unique illustrations on each card help to bring out the theme, making players feel like they are really visiting a new place. The box is compact—even smaller than typical Blue Orange boxes—and everything fits inside nicely. The only slight issue I found is that the red and pink player pieces have a similar hue. Not a major problem, but it could lead to some color confusion.

All in all, I enjoyed Zoom In Barcelona. I think it is among Blue Orange’s strongest strategy game offerings. It’s simple enough that younger players can understand it, but interesting enough to keep gamers engaged. If this sounds like your thing, check it out!

Zoom In Barcelona is an easygoing game that makes players feel like they are on a photo safari. Recommended for families and groups looking for laid-back gameplay and a fresh theme.