You may have heard that I like Star Realms. Like, a lot. I even wrote a buyer’s guide. But! Some people don’t like spaceships. Some people like dragons and wizards! And for those people, White Wizard Games created Hero Realms. Hero Realms shares ninety percent of its DNA with Star Realms, but includes some significant changes, including a lot more opportunities for cooperative play. Whether you’re a fan of Star Realms, deckbuilding in general, or medieval fantasy, here’s the proper order for slowly submerging yourself in a sea of Hero Realms!

The Base Game: First vs. Second Edition 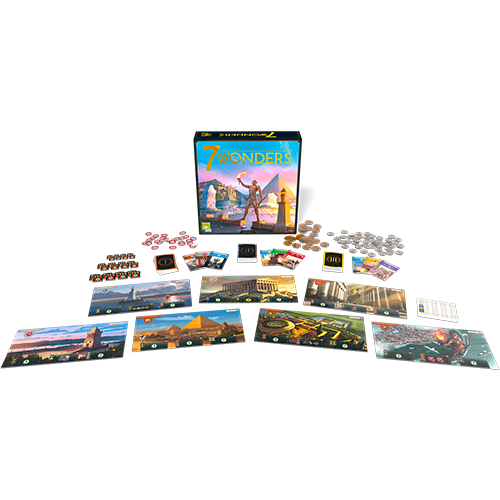 If you’re reading this, I assume you have at least a passing interest in 7 Wonders. However, 7 Wonders just got a brand new second edition, which is incompatible with the old expansions; those expansions were also reprinted with a non-trivial number of tweaks themselves. So, maybe you’re unusre which edition to get, or maybe you have the first edition and are debating the upgrade. For me, 7 Wonders is a 10/10 game, so the real question here is which edition to get.

If you own neither edition, I feel like I can say without hesitation that you should go for the new second edition. Between the refined aesthetic and gameplay tweaks, there’s a lot of improvement. While you might currently (February ’21) be able to find the original and its expansions for cheaper, that may become less true as time goes on, and you’ll lock yourself out of any future expansions. However, I still consider the original game a 10/10 game as well, and I’m not sure I can honestly recommend you put the money into upgrading if you’re happy with what you have.

Bottom Line: Go for the second edition if you haven’t plunked down the first edition already. 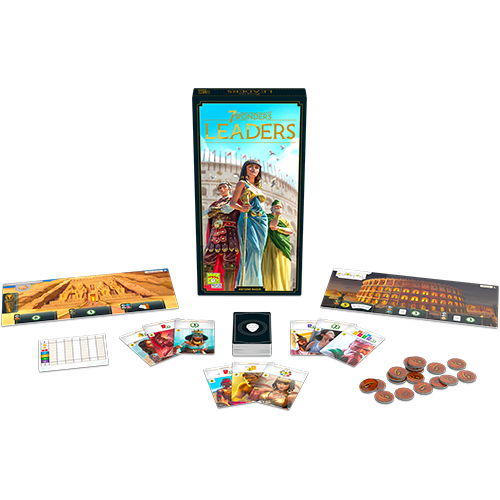 My take on 7 Wonders: Leaders is mostly the same as it was in 2011. This expansion adds Leader cards that are drafted in a “pre-game” draft, and then players can add one Leader to their tableau before each age. The problem is that you are forced to telegraph your plans: pick a Science leader before Age I, and players will hate draft the Science cards, for example. It can force you down certain paths before Age I even begins, but I prefer drafting to be much more open-ended.

However, in the past few years, I have come to value this expansion much more than before. While it might make an experienced player feel “pigeonholed,” it could also allow new players to find a focus amidst a sea of options. That same crowd will appreciate that this expansion isn’t full of extra tokens and new boards, unlike all of the other expansions. Let’s keep it a card game, please! I also really enjoy how crazy high scores can get with these strong and unique card effects. Lastly, because Leaders kind of does its own thing in its own phase, it integrates fairly easily with all other expansions.

Some notes about the second edition of the expansion: On the very bright side, the cards from the separate Leaders Anniversary Pack are now included in the package straight away. However, the 3 Guild cards from the previous edition are gone. I’m not too upset about this, as they were fairly weak guilds overall. So, financially, while the MSRP went up for the second edition, it’s likely cheaper than those two prior expansions combined.

Bottom Line: A very strong expansion, worth getting if you want more variety. 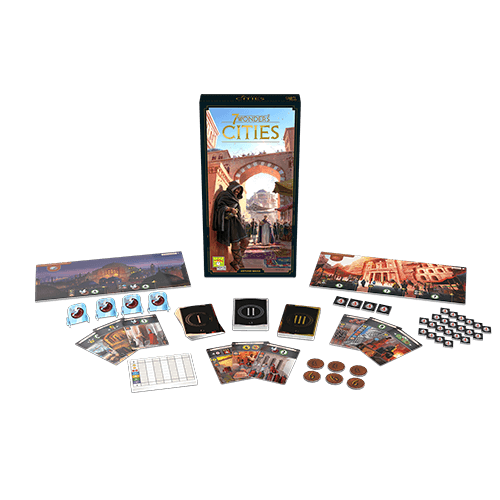 Here we are! My favorite expansion. See, the “problem” is that 7 Wonders is such a tight, perfect design, that it isn’t easy to add things to. Cities dodges that by essentially being an extension of the original design. It adds black (“black market”) cards, but 1 card per player is simply added to the hands in each Age. This makes the game marginally longer, but doesn’t disrupt any other mechanisms while adding some very unique new cards with fun “engine-builder” type abilities.

My only complaint with the expansion is that with low player counts, the “Diplomacy” effect can make it so that a player deep into a military strategy may only have one player to even fight against, heavily handicapping that player. However, since the new edition of Cities contains all of the cards from the Cities Anniversary Pack, you could simply play without the Diplomacy cards, should you so choose. But really, this expansion is an auto-include after your first few games, and our gaming group has found 7 Wonders + Leaders + Cities to be the “standard way” to play for us, as those expansions play quite nicely together.

I also think these are getting better as they go. The Ruin of Thandar had some vagueness in the rulebook; setup was a real bear; it wasn’t optimized for solo play (e.g. Ranger’s second ability was completely useless). However, The Lost Village added some cool twists and I was pretty comfortable with the system by then. For the sake of story, though, you should still play them in order.

Bottom Line: Once you’re ready, this is the must-buy expansion. 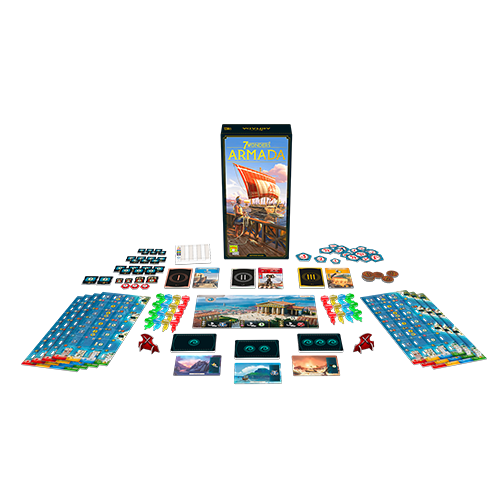 As I said above, because 7 Wonders is such a tightly knit design, expanding on it is hard. I’m especially wary of expansions that want to add a bunch of bits and pieces to a card game. Armada adds another player board for each player, with ships moving along tracks. There are additionally a new cards for the main Age decks, another new deck of cards, and a bunch of tokens. It’s kind of a lot.

However, the mechanisms in Armada do feel like they “naturally” extend 7 Wonders, and offering interesting new angles. I liked it quite a bit more than I thought I would, and I think other 7 Wonders experts will too. This is kind of like buying a sequel or an “expandalone” instead of a new game; you have a lot of the same DNA in the game so you can trust that it will be good, but it’s an entirely different experience. While Armada plays nicely with the other expansions, I kind of feel like I would rather rotate between Leaders + Cities or just Armada if I was bringing 7 Wonders to game night every week.

As for the second edition, it’s mostly all gravy: the Syracuse wonder, previously a separate promo, is now included, and naval combat is simplified for the better. For some reason, the 8th Armada board is gone so team play with eight players is no longer possible. I’m okay with that; if we have eight people at game night, we’re playing two different games in groups of 4, anyway.

Bottom Line: It’s an entirely new experience, but that’s not a bad thing.

7 Wonders: Babel (currrently out of print) 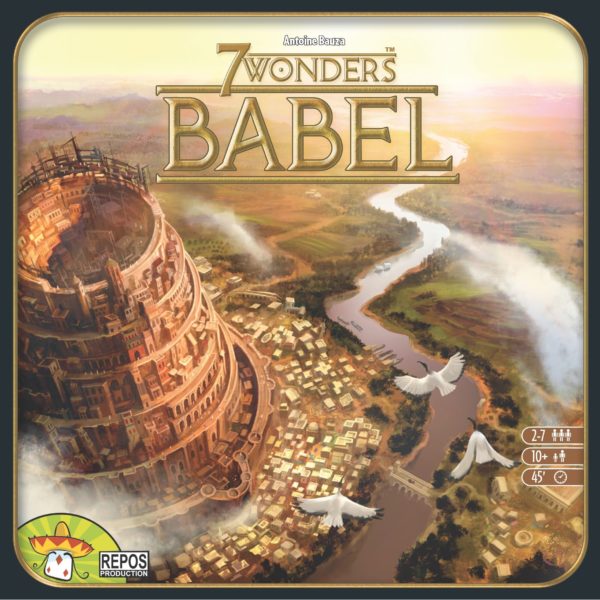 Sadly, they can’t all be good ones. 7 Wonders: Babel came with two different expansions, one large and not very good, one small and pretty good, as I stated many years ago. The main problem was that on top of all of the extra tokens and rules and table space, Babel added some particularly nasty attacks, and overall shifted 7 Wonders into a game that was too far removed from what made it appealing in the first place.

I don’t think I was wrong here, considering that there is currently no sign of Babel in the reprints for 7 Wonders Second Edition. I’ve read that part of the reason is that none of the components interacted with those in the base game or other expansions — e.g., no card decks that wouldn’t match up when mixed — but surely some symbols would look incorrect? In any case, I have to assume (lack of) sales and/or a mixed reaction is part of the reason we haven’t seen it again, either, and I’m okay with that. I’d be excited to see The Great Projects released again separately, but for now, as you can see above, we’ve got plenty of expansions to play already.

If you are going for 7 Wonders: Second Edition, you may find fewer options than you’d like here. Fortunately, the cards are the same size as before, although it is an annoyingly uncommon size (65mm x 100 mm). However, it’s becoming more common thanks to the popularity of, you guessed it, 7 Wonders. Asmodee’s own new line of sleeves from Gamegenic have sleeves in this size, but I had already full-on committed to Ultra Pro sleeves, and I am happy with them. Note that Ultra Pro now has, basically “cheapo” or “penny” sleeves in this size that come 100 to a pack (“Lite”), I would recommend you instead go with the “real deal” despite the price.

For organizers, The Broken Token had a great one for the first edition, but as of right now (February 2021), there is not an organizer for the second edition. However, Folded Space has one on the way for quite cheap, and I intend to spring for it. Of course, even without an organizer, all three current expansions fit in the box with room to spare, so maybe this isn’t necessary if you just use bags.

There’s not much else here; 7 Wonders wouldn’t really benefit from a playmat, and is already a gorgeous game without metal coins or whatever else. But you better believe my cards are sleeved!

Bottom Line: Get the sleeves of your choice; I like Ultra Pro. High hopes for the Folded Space insert.