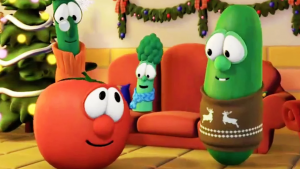 VeggieTales is coming back, and Geeks Under Grace Editor-in-Chief Lexi Tucker got a chance to interview Co-Creator Phil Vischer over email. GUG staff was given the opportunity to pitch in some burning questions they had for the man who created a show near and dear to their childhood hearts.

The first episode will be a Christmas special called The Best Christmas Gift that will premiere on TBN on October 22. It will also be distributed on DVD and Digital by Universal Pictures Home Entertainment.

GUG: Why vegetables? Seeing as children are typically averse to them, why not fruits or other types of food?

Vischer: In 1989, CGI was still really primitive. I decided if I wanted to make a show, I needed really simple characters–no arms, legs, hair, fur, or clothes. Just simple shapes with faces, basically. The first thing I thought of was a candy bar. So I made a candy bar. Then my wife noticed, and said, “Moms are going to be mad if you make their kids fall in love with candy bars.” Which was a good point. So I thought, “What’s shaped like a candy bar, but good for kids?” And the next thing that popped into my head was a cucumber. And that’s why vegetables.

GUG: Were you surprised by the popularity of the show? How did you maintain momentum after it got big?

Vischer: Well, it took two years to go anywhere, so at first I was disappointed no one seemed to care at all. Then it took off, which was equally surprising. As for momentum, I had the same tendency Walt Disney had, which was to try to make every new film bigger and better than the one before. It’s fun to keep trying to top yourself, but it can also lead to financial crisis…as Walt discovered when he narrowly dodged bankruptcy several times, and I discovered when I wasn’t quite as successful in dodging.

GUG: How difficult was it to get the characters right (appealing rather than creepy)? Did you have a say in choosing the voice actors? What made you choose the ones you did?

Vischer: Larry was the first character, and he pretty much looked the way he looks now from day one. So the character part came together easily. I cast all the voices, most of whom were me, Mike Nawrocki (co-creator), and my wife. I grabbed a couple friends from church and had them help out as well.

GUG: What is your favorite episode of the original series and why?

Vischer: Hard to say. I like Dave and the Giant Pickle (show five), because it was the first episode we were able to finish without killing ourselves. I like Lyle the Kindly Viking a lot, and also The Star of Christmas and An Easter Carol when talking together as a set.

GUG: What factors do they think eventually led to the eventual decline in the popularity of the show? When it was brought back for Netflix, who made the decision to water down the religious aspects of the show?

Vischer: The show was really at its peak of popularity up through the bankruptcy. But already it was clear DVDs were beginning to die, and so much kids TV was showing up for free on Nick and Disney cable channels that parents weren’t looking to buy individual episodes of kids shows anymore. Radical changes needed to happen after the bankruptcy to shift away from the DVD model, but the new owners weren’t interested. So they just made more DVDs, and sales kept declining. They sort of rode the DVD horse right into the grave. The Netflix show was entirely up to Dreamworks. Even the leadership at what remained of Big Idea had almost nothing to do with that show creatively. 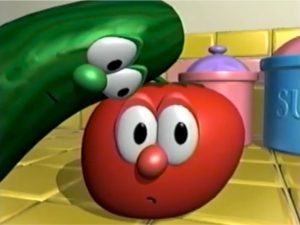 GUG: What was the biggest lesson learned during Veggie Tales’ original run? Either creatively or on the business side.

GUG: What’s going to be different with the new series? What will stay the same?

Vischer: Both NBC/Universal (who now own VeggieTales) and TBN (who is funding/producing the show) wanted to return to the feel of original veggies. When they asked if I could help do that, it was an easy answer.

GUG: What can you tell us about some of the new episodes? What are some of the Bible stories that will be covered?

Vischer: It’s been fun to cover some smaller Bible stories–stories that aren’t necessarily big enough to sustain a 45 minute film. So…the story of Ruth, Paul, and Silas in prison, Peter and John healing the crippled man, and even parables like the Prodigal Son. And then turning them all, effectively, into little musicals. That’s my favorite part.

GUG: Is there a Bible story you haven’t covered yet that you really hope to in the future?

Vischer: Not that immediately comes to mind. Samson, maybe? That would be fun.

GUG: With us being Geeks Under Grace, what pop culture influences were your favorite things to “geek out” over, and did they influence Veggie Tales? How so?

Vischer: A couple of films had a big influence on me early on. Terry Gilliam’s Time Bandits, which brought dry, British humor to a children’s film and reinforced my love for any character played by John Cleese, which led to the creation of Archibald Asparagus. Tim Burton’s The Nightmare Before Christmas…the villain, the Oogie Boogie Man, inspired Mr. Nezzer. The weasels from Who Framed Roger Rabbit inspired Mr. Lunt. Tim Burton, the Coen Brothers, and Terry Gilliam were probably my biggest influences around the time I was getting VeggieTales off the ground.

GUG: What was the process involved in writing silly songs with Larry? Which is your favorite and why?

Vischer: That was all Mike! I wrote the very first one, The Water Buffalo Song, and then asked if he could give it a try. He walked in a few days later with the Hairbrush Song, and I decided he would be writing all the Silly Songs from then on. 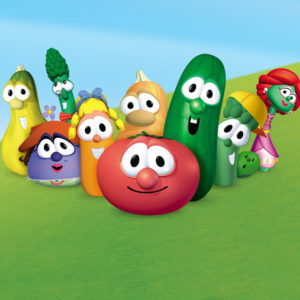 GUG: With LifeWay brick and mortar stores now a thing of the past, what are the challenges you see for growing the brand and ideas behind Veggie Tales?

Vischer: The trick for any faith filmmaker is finding a distribution platform that makes their work financially viable. You can make stuff and throw it up on YouTube for free, but if you’ve borrowed money to make your film and need to pay it back (and/or you want to eat and pay your mortgage), you have to come up with a viable business model. Disney and Nick have never wanted to do faith stuff, and now it’s looking like Netflix and Amazon aren’t terribly interested either. So…it’s a tricky business at the moment. Certain types of feature-length faith films seem to be viable theatrically, but nothing for kids, or even really for families.

GUG: Who is your favorite character and why?

Vischer: Almost all the characters have a little bit of me in them, so I can relate to all of them. It’s hard to write for a character you can’t relate to. Mr. Lunt and Archibald are probably my favorite to perform. Bob has to be the “adult” in the room, so I can never get too weird with him. But Mr. Lunt can say just about anything and get away with it. He’s fun.

Lexi Tucker wishes she had a more exciting story to tell about being saved, but she's been a Christian literally her whole life. She's a graduate of Loyola Marymount University in Los Angeles, Calif. with a bachelor's degree in English and minor in Asian Pacific Studies with a certificate in Journalism. She likes anime, manga, handheld games, cats, and boba.