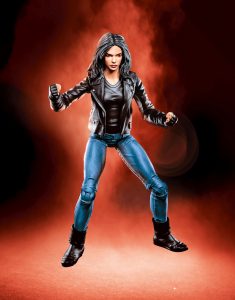 For me, probably like most of the population, the Marvel character Jessica Jones was pretty much an unknown character. If she didn’t show up in the 90s Spider-Man cartoon or went anywhere near the X-Men, then I had no idea who she was. And then Marvel partnered with Netflix and brought a whole new world to my attention. A darker side to heroes — rather, people who didn’t want to be heroes — that I had never known. I knew of DareDevil, but Marvel’s second Netflix series focused on a drunken privet eye who was just barely getting by in life; and really didn’t care, but had a great last name. She had no aspirations of dressing up and saving people. She just needed to make money so she could find her next bottle of booze (I mean, seriously, did she ever eat anything during her first season?) and pay rent. Relatable!

Except, y’know, replace booze with food and action figures and that’s me! 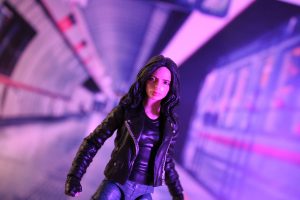 Going off of the Netflix series version of Jessica Jones, I’d say the likeness is pretty spot on! You can almost feel the no-cares-given attitude that exudes from the character.

Ever have one of those lives where nothing seems to go right? Jessica Jones’ history is actually very fascinating and depressing at the same time. 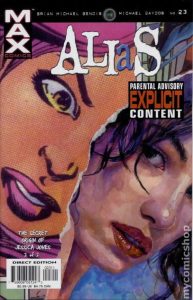 The main character in Marvel’s Alias series (no, not the J. J. Abrams show with Jennifer Garner), Jessica was once a normal girl who attended Midtown High and had a crush on Peter Parker. Either during summer vacation or spring break, her family decided to take a trip to Disney World. Somewhere along the way, Jessica and her brother got into a backseat fight — as most siblings trapped in the back seat for too long almost always tend to do — which distracted her father. During the distraction, he lost control of the family car and wrecked into a truck carrying unidentified toxic material. Jessica was thrown into a coma, but survived. When she eventually came to, she found that she had lost her entire family and was placed in a home for children. Luckily, she was adopted and taken in by a family (who, again, has a great last name) whose last name she decided to keep and returned back to school, where she gained the unfortunate nick-name “Coma Girl.” 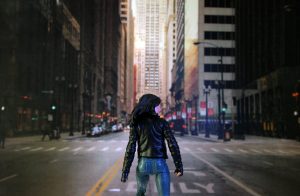 While running home from school, upset, Jessica’s superhuman powers began to manifest and accidentally began to fly and crash-landed in the bay. Soon after, she realized that she also had superhuman strength. Upon testing out her newfound abilities, she stopped a criminal and decided enter the realm of crime fighting; complete with costume and a new heroine name, Jewel. 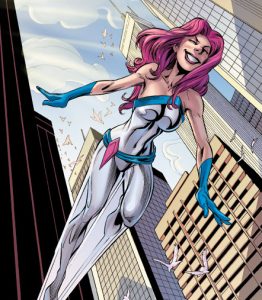 So young and care-free! You go, girl! 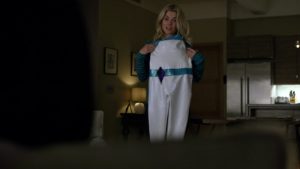 No, I will not put that on.

She remained a superhero for about four years until she crossed paths with Zebediah Killgrave, also known as the Purple Man (played by David Tennant in the Netflix show). Killgrave used his pheromone powers to take control of Jewel’s mind and made her attack the police. He was able to get free, and kept her as his mind-controlled slave. Unable to say “no,” she had to go through months of humiliation, doing things she didn’t want to do. Finally, he sent her to attack the Avengers which, obviously, didn’t turn out well. She attacked Scarlet Witch, which some how severed the Purple Man’s control of her. Unable to explain herself, she fled and was pursued by the rest of the Avengers and was rendered comatose by a blow from Vision. 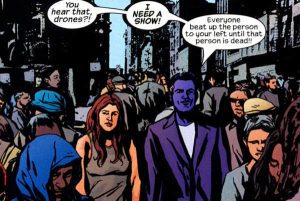 Definitely not a good guy. This is one of the tamest images I could find to show you just how evil the Purple Man is. 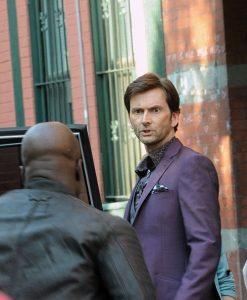 Definitely not the Doctor

Jessica was eventually able to explain what happened to her and was given a position at S.H.I.E.L.D., but felt that she was no longer meant to be a hero. Jessica Jones gave up the costumed life and her Jewel superhero identity. The Purple Man’s mistreatment left her damaged and unsure of herself. She then decided to become a private eye. 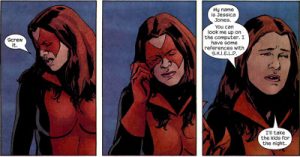 She did try to go back to the masked crusader business, but was short-lived. 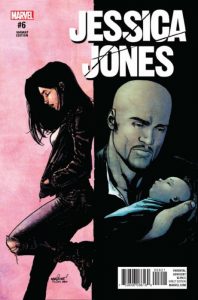 *Spoiler*
She does have a baby with Luke Cage

If you’ve ever picked up a Marvel Legends female figure, you can pretty much guess all the articulation Jessica Jones has. Her head is on a ball joint, as well as a disk hinge, but her hair keeps the head from looking up much past forward. She can, however, look all the way down. Her arms are able to go up just a little past 90 and can fully rotate 360. Single jointed elbows that bend to almost 90. A diaphragm ball joint that… eh, it gets the job done. No waist rotation. Removable jacket (but why would you?).

The hips are on ball joints and can go out almost wide enough to do the splits; can go straight out forward and not back at all due to a sculpted butt. Thigh cut can spin the leg all the way around. Double-jointed knees. Hinges at the feet that will let the feet point all the way down (tippy-toes) and can go up enough, about 45 from normal. And ankle pivots! Also boot cuffs that aren’t attached to the figure, so they slide a little bit to make room for wherever you might want to place the foot.

While posing the figure for this article, I found myself having some difficulty getting her to stand in certain stances. I usually don’t use sticky tack or wax to keep my figures standing, but I was tempted to with this one. Thanks to her thin legs and ankle pivots, she has a pretty wide stance with both feet flat on the ground. However, because of the sculpted glutes, her legs can’t go back any farther than straight. 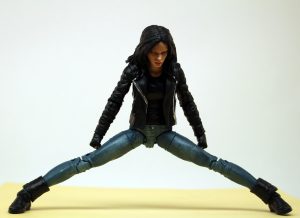 Widest stance possible with both feet (almost) flat on the floor

As much as I think this figure is pretty spot-on to the likeness of the actress and Netflix character, I do have some issues with this figure.

Firstly, which is the same issue Marvel Legends collectors always have with their female figures, but it bares repeating. No double-jointed elbows. The Netflix show is pretty story-driven, but Jessica Jones kicks butt every now and then and sometimes that requires bending elbows. 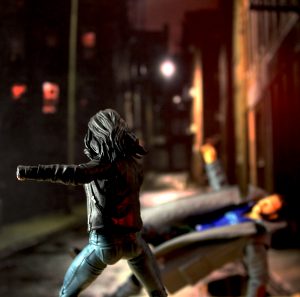 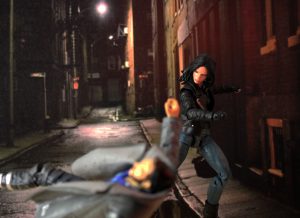 I couldn’t decide which angle was better.

There are distracting seams down the front of both legs. I’m not sure if they’re a flash issue (too much plastic in the mold to where it oozes out where the front and back come together) or if it’s something else. I don’t know why the seams wouldn’t be at the sides, which would actually make sense. She’s wearing pants with seams down the sides! Easy to hide! There’s also a curvy seam down the front of her neck. Speaking of seams and flash, the sides of her torso and hips have a long flash. But the jacket covers most of that, so it’s not that big of an issue.

The jacket looks great, and almost looks like a real miniature leather jacket. It just seems to be missing a few more paint apps, especially on the pocket zippers. The zipper handle is painted, but the teeth aren’t. 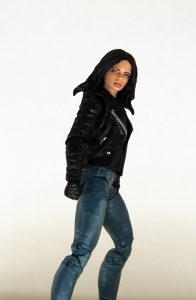 When the boot cuffs move up, you can see the pants under them. Since the blue pants have a little bit of fading printed on them to give the illusion of denim jeans, it might’ve been nice if they could’ve hit the very bottoms of the legs with some black.

On mine, the forehead either has a piece of printing missing or a layer too much of plastic. I’m actually not sure if the face printer printed just a hair lower than it should have. It looks like all her features need to be up just a little bit to hit all their parts.

Where is her scarf? 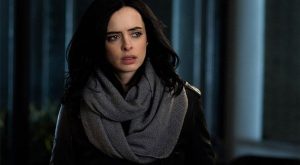 Sculpt is amazing and for the most part, all the paint is done pretty well, too! In a wave full of guns, swords, daggers, sias, batons, head swaps, and hand swaps, it’s so weird that Jessica Jones had nothing but the BAF torso. However, I can’t think of anything should could’ve had packed in, other than her camera and/or scarf. 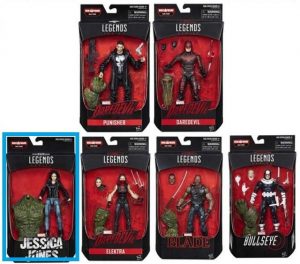 This idea is not mine, but found it worth sharing anyway.

If you’re as bothered by the lack of scarf as I am, an easy fix you can do is to grab an extra Star Wars Black Series 6” Jyn Erso. She has a gray hood-scarf that is perfect for cutting and adding to your Jessica Jones. I was able to pick up JJ for $15 and Jyn for $5, so when all is said and done, I spent the normal total amount of a Marvel Legend to finish a Marvel Legend.

For mind, I cut the scarf short in the back and the hood off with an Exacto knife. I then pulled JJ’s jacket back a bit, popped the head off (always heat the area up before doing so to avoid issues), put the scarf around the neck and between her back and jacket, then popped the head back on. With the scarf under the jacket, she mostly keeps her head’s range of mobility. I tried to put the scarf on the outside and she could barely move her head at all. 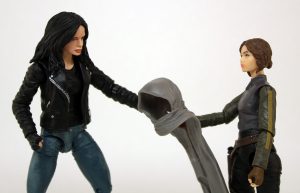 I tried to make this look natural, but I was getting tired. Also, Jyn looks like a child next to Jessica. 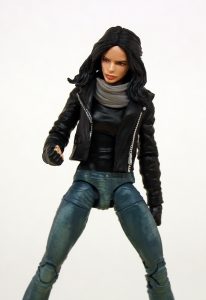 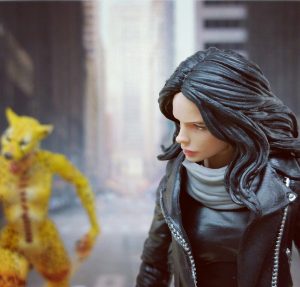 Out for a morning jog, “Cheetah Lady?” I swear, New York has the craziest people…