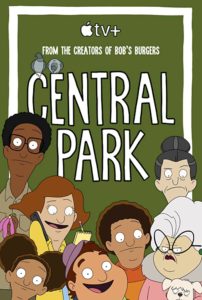 Central Park is an American animated television series distributed by Apple TV+. The series is created and executive produced by Josh Gad, Loren Bouchard, Nora Smith, and Sanjay Shah. The series was originally developed for the Fox Broadcasting Company; however, after the acquisition of Fox by the media giant The Walt Disney Company, Central Park found itself without a network. Looking for more animated projects to fill its libraries, Hulu, Netflix, and Apple TV+ all sought the distribution rights to the Bouchard cartoon comedy.

Apple won the bidding war to carry the new animation from the creator of the hugely successful Bob’s Burgers series and announced the development of the show in March of 2018. Shortly after Apple announced Gad and Smith’s involvement as executive producers, the series was green lit for a 26 episode season. Central Park premiered on Apple TV+ on May 29, 2020 with its first two episodes and concluded its season on July 24, 2020.

Upon Central Park’s premier, the series was met with outstanding critical praise. Rotten Tomatoes has the animated musical comedy at a 92% critic rating and a 75% audience score. Metacritic awards the series an 80 and a user score of 4.5. IGN gave the show an amazing score of nine out of 10. It seems this unique, quirky little animated musical comedy series run by Bouchard is just what critics and audiences have been waiting for. 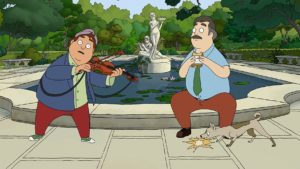 Spiritual Content: Very little to no mention of religion, God, or any other spiritual themes are shown.

Violence: There is no violence in the series.

Language/Crude Humor: Minor or mild suggestive jokes themes are littered throughout the series.

Sexual Content: Mild implication of sexual desire is suggested in the series.

Drug/Alcohol Use: No drug or alcohol use is present.

Other Negative Themes: Theme of greed and abuse of capitalism is explored.

Other Positive Themes: The bond of a family and the love they share together can overcome even the most challenging of obstacles. 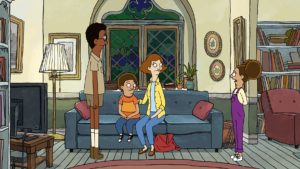 Central Park tells the story of Owen Tillerman who is the park manager of one of the most famous parks in the world: Central Park in New York City. As park manager, Owen lives in Edendale Castle in Central Park. Owen, along with his journalist wife Paige, daughter Molly, and son Cole, attempt to keep the park safe from those with ulterior motives. While Owen continues to keep the park clean, safe, and  ready for tourists and residents to enjoy, Paige discovers an underhanded scheme by Bitsy Brandenham, a greedy land developer, to build on top of the famous park for her own capital gains. Narrated by lovable park musician Birdie, the Tillerman family fights through their own family drama and issues as they stand against the abusive rich mogul. 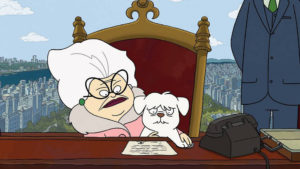 Central Park is one of the best cast animations on television to date. This little animated musical leaps off the screen and into your heart. Gad’s Birdie is the heart and soul of the series. Using his background in Broadway and film musicals, he brings a sense of humor, compassion, and genuine likability to the role which is mostly relegated to story narration and resides outside of the plot arc.

Gad is not the only cast member with a musical background. From Kristen Bell to Daveed Diggs and Leslie Odom Jr., the series is a powerhouse of musical and comedic talent. It is also excellently written. Jokes are frequent and land with a punch. The relationships the series exhibits are sweet, poignant, and will make you fall in love with every character. The series antagonist, Bitsy Brandenham, is expertly played by the legendary Stanley Tucci. Tucci’s approach to this character is over-the-top and just ridiculous enough to be threatening, yet harmless. Central Park perfectly marries the comedic family sentiment of Bob’s Burgers with a classic animated musical.

The absolute highlight of the series is its musical numbers. Every episode is packed with sequences which drive the plot of the episode forward. The numbers are clever, hysterical, heartfelt, and most important of all, catchy. The series pulls out all of the stops by acquiring critically acclaimed songwriters. Some of the composers lending their talents to the series are Cyndi Lauper, Fiona Apple, Megan Trainor, and many more legendary musicians. Comedic lyrics coupled with pop-y sounds make Central Park an animated musical like none other. The series is surprisingly entertaining and the music lifts the show to levels that were unexpected. 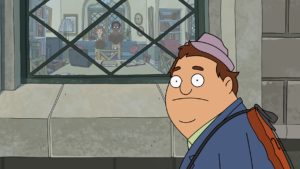 Central Park hits all the right marks for a funny animated series. What makes it stand out above the rest is the incredible music featured in the television show. Apple TV+ scored a huge win here. It’s like nothing else on television or any streaming service like it. Yes, there are many animated shows, and there may be some that feature musical numbers, but Central Park is packed with amazingly jam-worthy numbers bound to stick in your head. Its cast of wacky characters will grow on you as you become invested with each passing episode. The cast is rich, diverse, and wildly talented, and one that even live action television series pale in comparison to. Central Park is fresh, unique, and wildly addictive. It’s a series the entire family can enjoy.