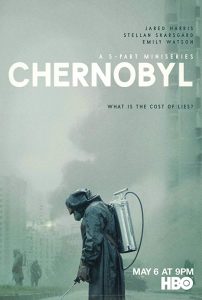 Chernobyl is an American television drama miniseries produced by HBO and Sky UK and distributed by HBO. The series was created and written by Craig Mazin and directed by Johan Renck. The show follows the true life events of the Chernobyl Nuclear Power Plant disaster in the USSR in April of 1986 and the cleanup and cover-up efforts following the disaster. The series premiered on May 6th, 2019 and concluded its five part run on June 3rd , 2019.

Craig Mazin found inspiration in the fact the tragedy is so widely known, yet he knew so little about the cause. After years of research, interviewing, and reading first-hand accounts, he found an incredible story of pride, government cover-ups, sacrifice, selfishness, and selflessness.

In July of 2017, HBO announced the order for a five episode run of the series written and executive produced by Mazin which would premiere on May 6th, 2019. Chernobyl completed its five episode run to widespread critical praise. The series has achieved a Rotten Tomatoes score of 95% and a Metacritic score of 83. It has just reached the achievement of becoming the most popular television show on the aforementioned review site Rotten Tomatoes and IMDB. With such universal acclaim, multiple nominations come award season seems inevitable. 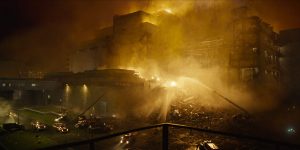 Spiritual Content: There was no organized religion in the USSR in the 1980’s, so there is little to no mention of God, religion, or spirituality in the series.
Violence: Soldiers are charged with the killing of domesticated animals by gunfire. A scene eluding to suicide can be seen.
Language/Crude Humor: There is very little foul language used throughout the series. The random F**k, B***h, A**, C**t, S**t is used scarcely.
Sexual Content: There are no romantic sex scenes in the series; however, full frontal male nudity is featured in one scene in the series.
Drug/ Alcohol Use: Although the use of alcohol and the smoking of cigarettes and cigars are peppered throughout the series, it never feels abused.
Other Negative Themes: Graphic depictions of extreme radiation injuries are featured prominently. These scenes are tastefully done in an attempt to display the weight and consequences of the disaster, but to squeamish viewers it may seem too grotesque.
Positive Themes: Though the series depicts one of the most hostile and deadly environments that ever existed on our planet — an open and exposed nuclear reactor’s core — the show follows the men and women who literally sacrificed their lives to battle the disaster and aided those who did. The exploration of human ingenuity, selflessness, and triumph is on full display.

Chernobyl examines in great detail the events in what arguably could be the worst man-made catastrophy in history. Chernobyl is well known, but the cause of the disaster has always been clouded in mystery. The show analyzes the series of events which lead to the nuclear plant disaster in April of 1986, exposing how and why it happened. The series follows Valery Legasov (Jared Harris) as he investigates the cause of the catastrophe and exposes the truth of the disaster as the USSR’s government attempts to hide the crisis from the world. The show explores in depth those people who aided, examined, investigated, worked at, fought in, and died in the disaster. 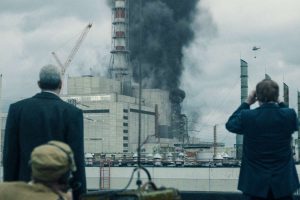 From the very first scene, Chernobyl establishes itself like no other series on HBO, other premium streaming services, or network or cable channels. The series starts with such a shocking twist it is impossible to revert your attention and turn away. Mazin’s writing may break some conventional screenplay techniques which would otherwise be detrimental to a story, but he puts on a master class of serialized writing. Although it was decided the actors would not feature Russian accents, every character feels genuinely authentic. Careful considerations were taken to flesh out every character, whether villain or hero, and written with the desire to represent and honor the person they are portraying. Every line of dialogue is expertly stitched together to make every tension-filled scene tangible. 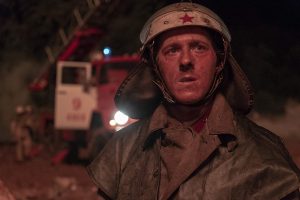 Although Johan Renck has some directorial experience, it’s nothing too notable. Along with Jakob Ihre’s few cinematography credits, they have achieved a visual style which draws you into each frame as if you are not just watching the scene, but living it. The visual style is raw, visceral, industrial, and grounded. Long shots of actions, emotional facial reactions, and painfully suspenseful scenes are heightened by the simple, bare-bones score of pulses that mimic the throbbing bass of a heartbeat. Many scenes are in fact scoreless, which increases the sense of dread as characters knowingly lead themselves to eventual death. Tension is expertly built as the cascade of disastrous events pile upon themselves.

The performances of this stellar cast are absolutely remarkable. Jared Harris’s portrayal of real-life Russian professor of nuclear physics Valery Legasov will arguably be his most acclaimed role yet. Harris captures a genuineness and humility while portraying exceptional scientific knowledge. Partnered with Stellan Skarsgard as a Russian bureaucrat and Emily Watson as a nuclear physicist, these actors share chemistry together unlike most on television today (pun intended). The entire cast, from main to supporting, breathe a deserving sense of tragic realism to their real-life counterparts. 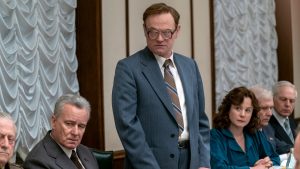 Tension is the best word to describe HBO’s mini-series Chernobyl. Although the subject matter of the series is of a nuclear disaster, by no means is this an action series. It has a tension building gradual pace which locks the viewer in as we witness the horrors of this true-life catastrophe.

HBO has released a podcast about the miniseries where the creator and writer discuss the story and production of the series. What we learn from the podcast is almost every horrific scene depicted on screen was a real-life situation. From subtle interactions with a wife and her horrifically injured husband due to radiation exposure, to the attempt to stop and cover up a potential global catastrophe caused by the nuclear blast are all true. In some cases, characters recited dialogue word for word from their real-life counterparts.

The fact the series does little to dramatize the already horrific disaster paired with the knowledge these events actually took place under the nose of the USSR’s neighboring nations and the rest of the world is what is truly hideous. Though the events of the disaster are unimaginable and horrible, finally the stories of the unsung heroes are told: The men who investigated the disaster and prevented further fallout to affect the globe ; those who dawned little protective wear to clear out radioactive debris; the firefighters who attempted to put out a nuclear fire with no understanding of what an open nuclear core would do to their bodies; and the three men who sacrificed their lives by entering a flooded radioactive basement in the dark to prevent a thermal nuclear blast which would have had global consequences. This series is a beautiful, depressing, and uplifting story which will forever change what you think of when you hear the word “Chernobyl”.

If you enjoy government coverups, true-life stories, tales of the resilience of the human spirit, investigatory and historical dramas, and bone-chilling, heart-pounding tension and suspense, then HBO's Chernobyl is right up your alley. Sit back and learn about the world's greatest industrial accident and enjoy arguably the best show on TV today.