In its 2nd week, Galavant is still going strong and ABC once again released two episodes back-to-back. Like last week, they were full of musical numbers, dry humor, and fun. Chock full of one-liners and slap-stick, both episodes are enjoyable and surprisingly clean.

Episode 3 finds Galavant, Sid, and Princess Isabella riding into Sid’s hometown of Sidneyland in order to give the horses some much needed rest. The surprises just keep coming when it becomes apparent that Sid is a local hero in what appears to be a stereotypical Jewish community, complete with over-bearing mother and plenty of Yiddish slang. 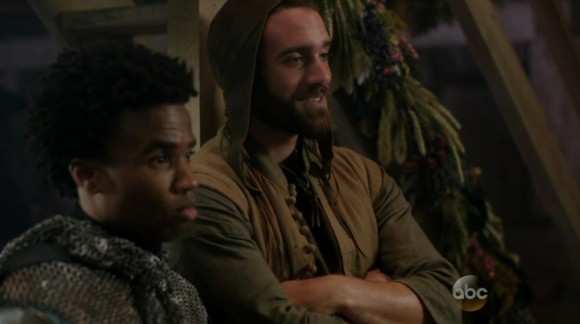 Of course, things can’t be that easy, and it is soon revealed that Sidney has told everyone he is a knight and Galavant must play the role of the faithful squire. In order to support Sid’s lies, Isabella announces that they are engaged and his parents declare that a ball is in order. Cue the musical numbers where Sid learns that he isn’t happy living a lie and Galavant is faced with what people really think of him. 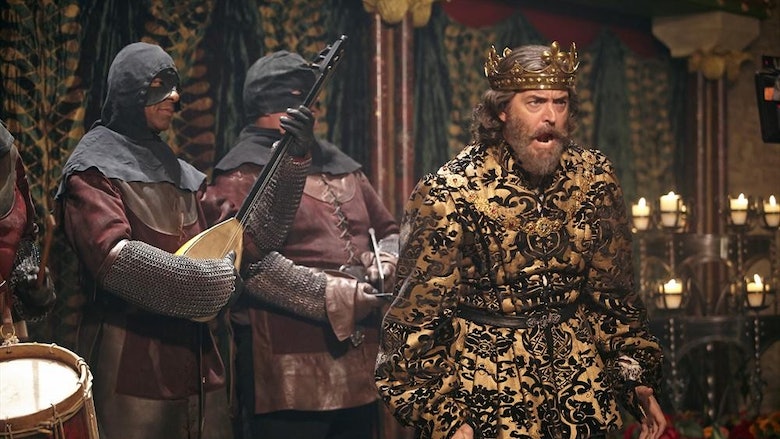 Meanwhile in Valencia, King Richard is still trying to win the affections of his wife and decides to throw a ball to cheer everyone up and have a little fun. While Madalena is busily preparing a “comic routine” with the jester, the king discovers just how hard it can be to plan a ball when you’ve burnt all the crops and executed the musicians. 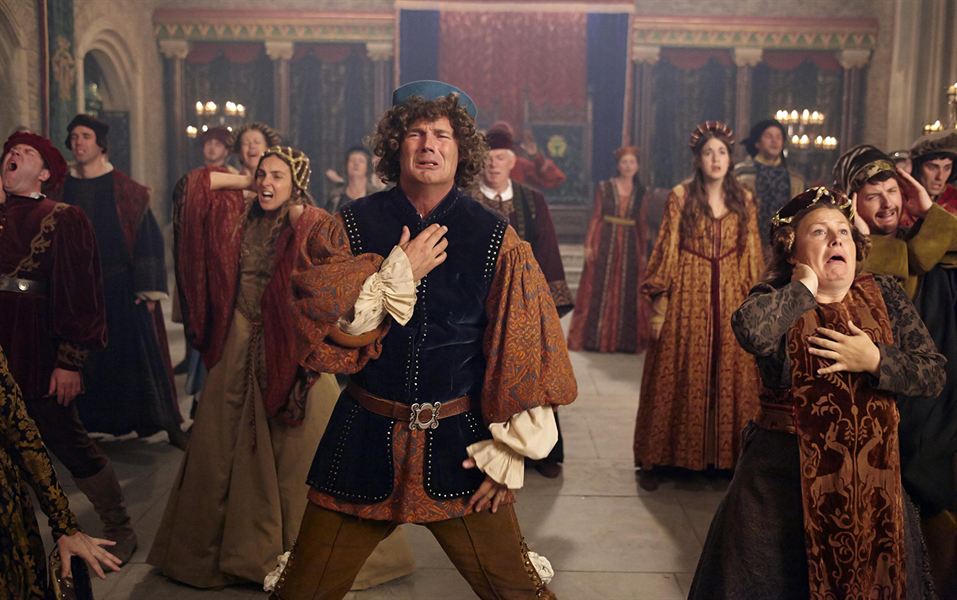 In the end, despite the musical stylings of The Executioners, the Valencians just aren’t having any fun and the king asks them for some honest opinions. It all seems to be going well until the local eunuch reveals that Madalena and the Jester are having an affair, which means The Executioners have to get back to their day jobs as, well, executioners.

While the language may offend some, “Jacka** in a Can” is by far the best song in this episode. Detailing how the squires truly feel about the knights they serve and the small ways they enact their revenge, the song is funny and catchy. Relying heavily on Jewish stereotypes, “Oy, What a Knight” is also fun and catchy, but not really that memorable in the end.

Episode 4 introduces another key element of the fantasy world: pirates! As Galavant, Sid, and Isabella travel to Valencia, they are captured by a group of pirates and taken back to their… camp? Apparently, due to some disagreements brought on by too much time together, they have managed to get their ship stuck atop a mountain and have now set up camp and taken up sustainable gardening.

After discovering Queen Madalena’s affair with the Jester, King Richard has decided that he needs to learn how to be funny if he ever wants to win Madalena’s love. Naturally, he goes to the funniest man he knows: the Jester. Approaching him in his chambers, the king informs the jester that he knows about the affair and attacks him with a sword; a rubber sword, that is.

The jester attempts to teach the king, but in the end if you’re not funny, you’re not funny. He does decide to end the affair with the queen and is hauled off to the dungeons for his trouble. Now Madalena has plenty of time to listen to the king’s jokes and appreciate the man she married!

Back at the pirate camp, Galavant and the pirates have come to an agreement: In exchange for helping to get the ship free, Galavant and his friends will receive passage to Valencia. Everyone has learned how to work together and not let minor differences come between them. But what will happen when they arrive at their destination and Isabella’s treachery is revealed?

This episode had two great songs in “Together” and “Lords of the Sea.” “Together” details some of the problems which arise as the heroes travel together and begin to get on each others’ nerves, even though they are working together. “Lords of the Sea” is a simple pirate chanty, but it’s full of humor and funny enough that I had to hit rewind and watch it again. Each song had me laughing throughout and eagerly awaiting someone to post them to YouTube so I could listen to them at my leisure. “Comedy Gold,” on the other hand, is yawn inducing and a little painful.

After the first episode, I was a little worried that this show was going to rely heavily on sexual innuendo to find its humor. I’ve been pleasantly surprised that that doesn’t seem to be the case. Yes, sex is mentioned, but this week’s episodes had so much more to them that the innuendo was pretty negligible and no longer the main point of the show.

Last week’s episodes bleeped out any cursing that was used outside of songs. This week changed that, and while the bad language is at a minimum by today’s standards, it is present, and the director didn’t go through the effort of hiding it. The one exception being Gareth’s knock-knock joke, which was simply a string of bleeps and pretty funny because of that.

Sex – Innuendo and adultery is talked about but not shown.

Between the musical numbers and the humor, episodes 3 & 4 keep the ball rolling towards this show becoming a hit!