If you’re looking for a show that features singing heroes, dancing peasants, and plenty of cheesy fun, it’s time to sit down and watch ABC’s Galavant. Following the adventures of Sir Galavant, this musical will have you smiling and singing along as it pokes fun at itself and the entire fairy tale genre.

Featuring a truly talented cast, Galavant is funny and entertaining throughout the entirety of the pilot episode, which is mostly just an introduction of characters and plot. Perhaps the most exciting members of the creative team are songwriters Alan Menken (Beauty and the Beast, The Little Mermaid) and Glenn Slater (Tangled, The Little Mermaid). With these two gentlemen at the helm, the music is sure to be great, and the creators behind this new comedy have succeeded in creating something that is both original and familiar while promising to be enjoyable for everyone.

So far, the show has only been scheduled for eight episodes, but, if the next seven are as good as the first, we can always hope for more! Sir Galavant, played by Joshua Sasse, is the realm’s most famous hero and has found his one true love in the beautiful Madalena (Mallory Jansen). When King Richard (Timothy Omundson) kidnaps her and forces her to marry him, Galavant rushes to her aid and tells the king that she cannot marry him because Madalena is in love with him and he with her. Unfortunately, Madalena has had time to consider King Richard’s wealth and informs Galavant, “I’m going to go with the fame and fortune. Seems like an easier life, you know. I’m really sorry Gal, hope we can be friends.” 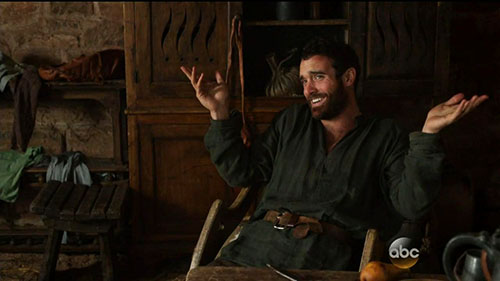 Having lost his one true love, Galavant sinks into despair and takes up drinking as his new favorite hobby. Enter the princess: Isabella Maria Lucia Elizabetta of Valencia, played by Karen David. King Richard has invaded her kingdom in search of the Jewel of Valencia, and only she has escaped. She comes to Galavant to ask him to avenge her people. Galavant, however, has given up his life of heroism and is now busily supporting a two keg per week drinking habit and mourning the loss of his poet-praised abs.

Back in Valencia, Queen Madalena’s personality seems to have taken a turn for the worse, and her marriage to King Richard doesn’t appear to be going smoothly for the king. They have invaded the peaceful kingdom in search of the Jewel of Valencia in order to satisfy Madalena’s demands. While she is busy learning how to “craft a joke” from the jester, King Richard tries to express his frustration with a song about what he would like to do to Galavant in order to win Madalena’s respect and love.

In the end, Isabella reveals that it was King Richard that invaded her kingdom. On King Richard’s orders, she tells Galavant that the queen cries every night and says that it was a mistake to marry the king. Unable to resist, Galavant is once again off to rescue his love and is walking into the trap that the king has laid for him.

While the show is fun and light-hearted, I definitely wouldn’t consider it a family show. Beginning with the opening song, there are lyrics discussing Galavant’s sexual relationship with Madalena; the images on screen don’t show any skin, but there is still little left to the imagination. While it’s not graphic, the repeated allusions to sex and adultery are also unnecessary, and, for me, do more to detract from the charm of the show than to add humor to it.

Language – B**** is the only word used and it is bleeped out. There is a lot of sexual innuendo that is pretty clear and not suitable for younger viewers.

Violence – Fighting with swords, but no killing or blood. The king sings about what he would like to do to Galavant in sometimes inappropriate detail (stabbing in genitals).

Sex/Nudity – There is a lot of discussion of sex, but no nudity. The opening song talks about Galavant and Madalena’s sex life as they are beginning to engage in the act.

If you're looking for 30 minutes of musical fun, you can't go wrong with Galavant.