A gun fight with one of Gotham‘s  infamous assassins where Jim Gordon takes two bullets is a heck of a way to start the show. Plot twists, deception, murder, and manipulation are all present in this episode, which leaves little time to cool down.

This series is rated TV-14. This particular episode has gun fights, a fatal knife attack, expletives, and cold murder of a police officer. Gotham is not a show to watch with the littler kids, and this episode is no different. 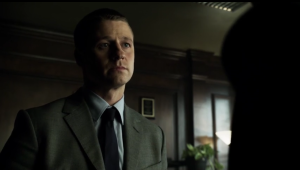 “Are you insane?” “No. …maybe a little. Feels good.” Captain Sarah Essen and Jim Gordon

“Penguin’s Umbrella” starts not long after “Spirit of the Goat” ends with Oswald Cobblepot introducing himself to the entire Gotham PD precinct. The episode opens with Fish Mooney frenetically demanding Gordon be brought to her for justice. Harvey Bullock, who the major crimes unit detectives had to hold at bay as “Spirit of the Goat” faded to black, is ready to fight Jim Gordon. The corrupt Gotham PD doesn’t know how to respond to the new detective’s refusal to fulfill Don Falcone’s orders to kill Oswald Cobblepot, and even the always placid Falcone is ready to send in his assassin, Victor Zsasz.

Jim Gordon works to mount a strike against Falcone and Mayor James, but is interrupted by a silver screen attempt at a shootout in the precinct with Zsasz. The villain and one of his hench-women both get a bullet in Gordon, and are right at the cusp of apprehending him before the major crimes unit detectives show up just in time to help Gordon escape by providing cover fire against Zsaz and his team. Ironically, the Major Crimes Unit detectives that had come to arrest Jim at the end of “Spirit of the Goat” for Cobblepot’s murder are, for a short time, his only allies.

Oswald Cobblepot encounters Fish Mooney in Sal Maroni’s restaurant after convincing Maroni that he is worth protecting as opposed to the adversarial, less powerful mob boss handing Cobblepot over to Fish Mooney and Don Falcone. Oswald manipulates a war between the more powerful Falcone and the less powerful Maroni, taking out Fish Mooney’s bedfellow, Nikolai, and Maroni’s right hand-man, Frankie. Ostensibly, this moves Cobblepot up another rung in Maroni’s organization, while at the same time eliminating the only gangster that seems to understand the Penguin’s cunning. However letting Nikolai die in the process doesn’t make sense until  the revelation that Cobblepot and Falcone have been working together since the series started.

Jim Gordon leaves the doctor that the MCU detectives secretly took him to and sets out to go after Falcone and Mayor James. Bullock stops by his place slobbering drunk, but offering to help. The two detectives arrest the mayor first and then head to the mob boss, using the former as a sort of Trojan horse to enter Falcone’s estate. However Falcone has Victor Zsasz kidnap Barbara Kean, Gordon’s Fiance, for leverage. In an almost unexplainable gesture that is explained at the end of the episode, Falcone releases them all.

Their release is explained at the end of the episode when Cobblepot approaches Falcone at his chicken coop and the two rehash an earlier conversation–a flashback to the pilot episode where Falcone lets Bullock and Gordon go but requests that Gordon kill Oswald Cobblepot. We are reminded that the Penguin makes a request of Falcone that Gordon be the one to kill him, hoping he wouldn’t, and when Falcone lets Gordon, Bullock and Kean go, it was at Cobblepot’s request as a gesture of appreciation. 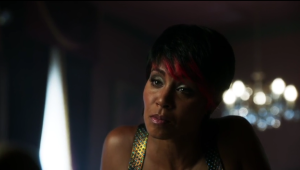 “Penguin’s Umbrella” was, with no doubt, the best one thus far. Granted it is only episode seven out of twenty two, and the arc the writers invested in was a pretty big one to do so this early on in the season. Like going “all-in” early in at a Texas Hold’em tournament, the creators put a lot into this episode, and they earned a straight flush on the river. But this episode wasn’t perfect. Why in the world would Barbara Kean go to Don Falcone to beg for Jim Gordon’s life, other than for the story to work by letting Falcone turn the tables on Gordon and Bullock? It was great to see the psycho self-carving Victor Zsasz, the fascinating assassin character from the Batman mythos but why did he use guns rather than his trademark sharp weapons? Why did one of Zsasz’s sadistic hench-women get the first successful shot at Gordon rather than Zsasz himself ? For a while I was thinking Fish Mooney’s evaluation of Don Falcone as weak and ready to be outed as an overestimation… 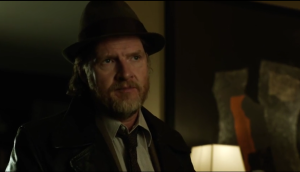 “I figure I’m doomed anyhow. I might as well join the good guys.” – Harvey Bullock

…until the plot twist of Oswald Cobblepot working with Don Falcone was revealed at the end of this episode. The gamble Oswald Cobblepot made in the beginning of the series, hoping he could sway Jim Gordon to not kill him, was going “all-in” in every sense of the word. Talk about placing a lot of faith in someone! Speaking of faith, Gordon’s “I’ve got nothing to lose” attitude in this episode might seem a little reckless, but the attitude he has isn’t much different than the one we should have as Christians. Until Don Falcone discloses the ace up his sleeve that is Barbara Kean, Gordon could care less what happens to him; he is determined to arrest the corrupt mayor and mobster. How can this apply to us? Well while Gordon didn’t know about Kean at first, and thought he had nothing to lose, we do know who wins spiritual war. Much like we the audience know that Gordon has to survive for the show to go on, we know that victory is in Christ. Therefore any tribulation we encounter should be less troublesome knowing that we can do all things through Christ (Philippians 4:13) and with God on our side who can be victorious against us(Romans 8:31) 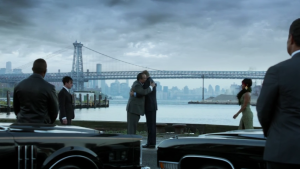 “Good luck with that. There’s nothing more dangerous than an honest man” – Sal Maroni

“Penguin’s Umbrella” had some really good action, but didn’t skimp on the writing; there were plenty of plot twists and deep character immersion as well. I loved seeing Victor Zsasz, and the actor that portrays him was adept. That picky geek within me is dismayed that the carver and liberator uses a handgun in lieu of a knife, but then that amazing shootout in Gotham PD would not have been possible, and by”amazing” I mean amazingly awful accuracy; wasn’t Gordon in the military and isn’t Zsasz destined to be a future serial assassin? While I loved the idea of the unbalanced executioner having female hench-woman, the idea that one of them put a bullet in Gordon before he could is alarming. Then again maybe this is before Victor decides to upgrade from a box knife to a proper blade and ditches the guns altogether. Any fan of Batman that recognizes him has to appreciate the very few carved tallies, showing him in his origins.

The conversation Renee Montoya has with Gordon after they leave the doctor she and Crispus Allen recruit to treat his wounds was powerful from a story standpoint. The two have been at escalating odds since the pilot episode and now they are on the same side. I believe that Crispus and Renee will prove to be capable allies in the future; we already know that neither are afraid to go against Don Falcone and the corruption within Gotham PD.

The reveal that Oswald was Falcone’s snitch the whole time was, for me at least, entirely unpredictable. Robin Lord Taylor as Oswald is insane, in the most complimentary way. On social media the actor has admitted both his pleasure in playing the part and even his shock at seeing the confluence of the Penguin and Don Falcone at the end of “Penguin’s Umbrella.”

Donal Logue as Harvey Bullock does a great job of being the funny man in this episode, personally I think he walks the tightrope between that and a darker character, coinciding with the Batman Mythos nicely. Ben McKenzie’s is really starting to find his stride as Jim Gordon, which is imperative seeing as he is the main character in the series. So far the show has been really impressive, and”Penguin’s Umbrella” was incredible. I just hope after hitting pay dirt with “Penguin’s Umbrella” the creators of Gotham don’t rest on their laurels, but keep pushing the limit and impressing the audience. I for one am anxious and excited to see what they do next! 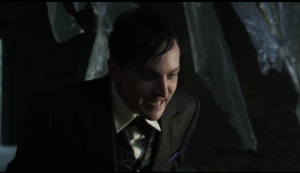 This is, quite simply, the best episode of Gotham thus far.