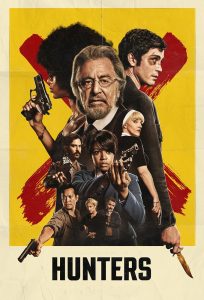 Hunters is an American television series created by David Weil and produced by Amazon Prime Video. In the spring of 2018, Amazon’s streaming service announced a ten episode series centered around a group of Nazi hunters in 1970’s America. In conjunction with Sonar Entertainment and Monkeypaw Productions, “Get Out” and “Us” Director Jordan Peele joined the production team as executive producer. In August 2018, Nikki Toscano also joined the Hunters production as executive producer and co-showrunner with the series creator and head writer David Weil. In late 2018, one of Hollywood’s brightest upcoming stars Logan Lerman (Percy Jackson’s, The Perks of Being a Wallflower) landed the lead role in the series. In January 2019, it was announced the cinematic legend Al Pacino was confirmed to co-lead the series with is first entry back into a television series since 2003’s “Angels in America.” Shorty after, the series rounded out the ensemble cast with performers of different races, ages, and stages of career with Saul Rubinek, Carol Kane, Josh Radnor, Tiffany Boone, Louis Ozawa, Kate Mulvany, Jerrika Hinton, Lena Olin, and Greg Austin. The series premiered on Amazon Prime Video on February 21, 2020 with all ten episodes available to stream.

Amazon Prime Video’s Hunters debuted to mixed reviews. Although the series is classified as “Fresh” on Rotten Tomatoes, the review site has the show at a 64% Critic rating and a 68% Audience score. Metacritic scores the series with a mediocre 55 and a user rating of 4.2. IGN awards the series an average seven out of 10 review score. With such polarizing reception, season two is anything but absolute.

Spiritual Content:  Hunters is riddled with religious themes. The Jewish faith is a prominent fixture throughout the series. From traditional Jewish weddings and funerals, to Orthodox Synagogue services and ancient Hebrew prayers, Judaism is an important staple of Hunters. Catholicism is featured slightly as a main character is a gun toting, former MI6 agent turned nun.

Violence: Hunters frequently features extreme violence as it tells the horrific stories of the victims of Nazi Germany. The series is littered with bodily dismemberment including the use of chainsaws on humans. Scenes of torture with use of a blow torch and electric jumper cables. The show also includes bomb explosions, gun shots, stabbing, strangulation, blood and gore.

Sexual Content: Hunters is filled with crude sexual content. Scenes of female on female and male on male love making are riddled throughout the series. Nudity is also frequent in the show.

Drug/ Alcohol Use:  Multiple characters frequently use cigarettes, pipes, and cigars. Alcohol consumption is seen often throughout the series. Marijuana is used, sold, and distributed occasionally.

Other Negative Themes:  Revenge is a major focus in Hunters. Although revenge might lead to some satisfaction, it’s usually short-lived.

Positive Themes: Diversity is a theme featured throughout the series. While the series exhibits a plot of white supremacists to take over the country, the muti-ethnic, multi-gender group seek to derail their plans. The contrast between groups is an allegory to the series as a whole.

Hunters follows Jonah Heidelbaum (Logan Lerman), a 19 year old Jewish boy who lives with his grandmother Ruth Heidelbaum (Jeannie Berlin) in 1977 New York City. After witnessing his grandmother’s cold blooded murder, Jonah sets out to discover the identity of the killer. During his investigation, he is arrested and bailed out of jail by Meyer Offerman (Al Pacino). Offerman, a life long friend of Ruth’s, befriends Jonah and takes him under his wing. By doing so, Jonah discovers Meyer Offerman isn’t just a wealthy old man who bailed out the grandson of a close friend, but the leader of a secret group of Nazi Hunters who investigates, identifies, and assassinates WWII criminals.

Although discovering Meyer’s tribe of Nazi killers is a surprise, learning his grandmother was a founding member of the group is an even greater shock. Now aware of his ancestral history and calling, Jonah joins this ragtag team of assassins, consisting of a husband and wife who are concentration camp survivors and weapon experts, a militant African American female counterfeiter, a Vietnam vet, a Hollywood actor who’s a master of disguise, a former MI6 agent, and Meyer as an architect and financier. Jonah lends his talents and gifts in code deciphering  in order to seek revenge for his grandmother, ancestors, and the other victims of the Third Reich.

Inspired by historical events and real life groups of Nazi hunters, Meyers and his team, along with their newest member, continue to investigate Nazis hiding in the United States. These war criminals were brought into the country by a secret U.S. organization to acquire the brightest minds of the German army and scientific community in order to seek dominance over the U.S.S.R. As Meyer and his men continue to investigate these hidden Nazis to bring them to long awaited justice, they uncover a secret plot by the Nazis where they have secretly caused some of modern history’s tragic events. By pulling the strings in the shadows, this well organized group of white supremacists seek to give birth to the Fourth Reich. Hot on the Hunters heels is a no-nonsense FBI agent who begins to find links to the trail of bodies left by the Jewish vigilantes. 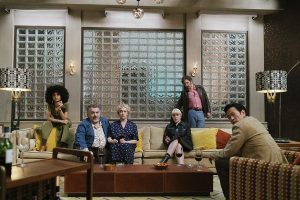 Hunters’ use of actual historical events to drive the series forward allows for a unique authentication to the show. Its depiction of Nazi Germany’s invasion of Poland is horrific and heart breaking. The stories told by Al Pacino’s Meyer Offerman and other German victims are told in all too real flashbacks. The incidents of torture and brutality on the victims of the German concentration camps are told in a beautiful, yet dreadful and heart wrenching, fashion. The series remains consistent using historical events to shape its world. The Nazi hunters come across a series of plots to manipulate society in order to dominate the world by causing a series of world changing events, such as the assassination of JFK and Robert F. Kennedy and the 1970’s New York black out. 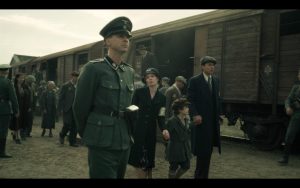 At times, Hunters veers off into a bit of campy-ness by combining tragic events with out of place comedy.  This dynamic could lead to a polarizing of appreciation. However, what would be difficult to argue is the stellar performances of the entire cast. Hunters is a masterful example of an ensemble cast done right. Every performer pulls their own weight to move the story forward. The only downside in having such a spectacular cast and is there isn’t enough time devoted to each individual, unique character. In spite of the limited time allocated to each character’s backstory to just one episode, Hunters succeeds in getting the audience invested in the characters and their outcomes.

Although Hunters is an ensemble work of fiction, Al Pacino’s performance is absolutely a major stand out. Pacino’s execution of  the leader of a group of assassins is breathtaking. He embraces the role of a father figure to Jonah and a strong and confident commander to a group of ruthless killers. Pacino brings all of his talent to the series and leaves nothing on the table. Another series stand out is the performance of Greg Austin as Travis Leich, the series’ antagonist. Austin embodies a terrifying killer by adopting a “less is more” approach to his performance. His nuanced portrayal of a Nazi fixer can send shivers down your spine. Austin’s composed demeanor and piercing stare combined with his ultra violent outbursts make his performance a must watch of 2020. 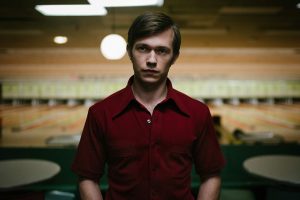 Visually, Hunters is a feast for the eyes. Its stylish pulp-centric tone is a delight to watch. Hunters is very much a period piece as it is set in 1977  New York City. The production of the show is so magnificent it almost seems the series was filmed and produced in that decade. Hunters truly is an authentic depiction of the 1970’s. Its dark tone contrasted with its comedic style allows for Hunters to be a unique induction to wealth of streaming options. Its pulp stylings will lend itself well to an audience who also appreciates Tarantino films. The majority of the series’ tone is consistent; however, the same cannot be said for its pacing. The first couple of episodes are easily consumable as are the last few episodes. However, the middle of the series drags a bit and can be a chore to get through. This is where Hunters fails. The poor pacing in the middle of the series allowed for a missed opportunity to dive deeper into the ancillary characters in order to flesh them out.

Amazon Prime Video looks to add to its streaming library a stylized espionage action series in Hunters. Hunters pulp stylization stands out from the typical action series provided by other streaming services and networks. The series highlight is its impeccable performances lead by Al Pacino. Its use of real historical events provides a sense of  realism not found in other television shows. The series’ attention to detail in its production lends it a touch of legitimacy. Although the series pacing is fairly inconsistent, the series remains enjoyable to watch. Combined with its magnificent cast, ties to actual historical events, and unique direction, Hunters keeps viewers at the edge of their seat.

Hunters combines a magnificent cast performance, ties to actual historical events, and a unique stylized direction to keep viewers at the edge of their seat.