Review: Once Upon a Time Season 4 Episode 7

Sunday night’s episode of Once Upon a Time was FULL of surprises! The Snow Queen killed one of her sisters?! Robin and Regina shared a passionate kiss?! There’s a first-time moms support group full of all of our favorite Disney princesses?!? Let’s get into this SPOILER FILLED recap.

This episode deals with sorcery and witchcraft, infidelity, drinking, and death. 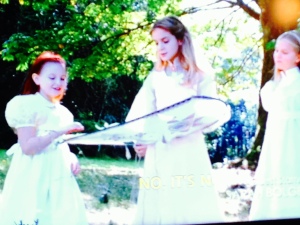 The episode begins with three young sisters playing with a kite in an open field. The girls are Ingrid (the Snow Queen) and her two sisters: Gerda and Helga. The kite crashes into a tree, and the sisters begin to argue over ribbons attached to the kite. Just then, a man wanders over claiming that the kite was his. When the sisters begin to apologize for destroying of the kite, the stranger isn’t upset, it’s something else that he was after; he attempts to kidnap the sisters! Ingrid tries to help her sisters by freezing a tree branch. The branch falls upon the stranger, but not before he yells, “you’re a monster!” The sisters compose themselves, but Ingrid is petrified that someone will find out about her powers, and what she’s done with them. The three sisters make a pact to never tell anyone about Ingrid’s powers, and to always be there for each other. They each take a ribbon as a symbol of their vow.

We flash forward to the present where we see the Snow Queen heading into the Clock Tower of Storybrooke where she’s setting up a trap. Cue: title sequence.

Regina’s in her secret vault, looking for spells to wake up Marion, Robin Hood’s wife. Robin Hood (the love of Regina’s life) enters. They squabble. They both know that the only way to wake up Marion is with true love’s kiss, but Robin is in love with Regina. As much as it pains them both, she has to push him away. 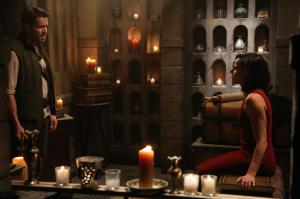 Cut to the Storybrooke police station, where Elsa and Emma search for ways to render the Snow Queen useless. Emma tells Elsa about Belle’s recent discovery while reading: a candle that magically shackles another being. It can only be used by another magically wielding user, as they must blow on the candle to light the flame and create the spell. While they practice using the candle, Elsa asks if anyone else in Emma’s family possess magical powers. When she says no, and Elsa confesses that it’s difficult when your family looks at you differently. Emma says that they don’t.

Now onto the coolest scene in the show: The First-Time Mother Support Group. Mary Margaret (Snow White) has taken Neal to spend time with the other first-time mothers and their newborns. There we see Ashley (Cinderella), and Aurora (Sleeping Beauty) with their children. Mary Margaret has asked Emma to babysit. Once Emma arrives, she visits with the mothers. Mary Margaret talks about being a first-time mother, and Emma obviously gets upset. Mary Margaret tries to apologize, but before she can, Emma’s magic starts showing; she begins unintentionally boiling the bottle. She shakes it off and reaches for baby Neal (her little brother, might I add), but Mary Margaret pulls the baby back. Before anyone can respond to how super awkward that was, Emma’s phone rings. David (Prince Charming), has found the Snow Queen’s trail, and Emma leaves to go after her. 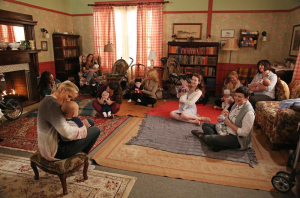 Emma and her party (Elsa, David, and Emma’s boyfriend Killian) charge inside the clock tower to the Snow Queen. Emma blows on the candle, entraps the Snow Queen, and the good guys cheer. It was almost too easy…

Flashback to Arendelle: the once-young sisters are well into adulthood, and Gerda and Helga are preparing for a ball. They insist that Indgrid prepare, but she refuses. She’s too frightened by her powers, and remains hidden from her future kingdom. The other sisters attend the ball, and Helga dances with her suitor, the Duke of Weselton! Ingrid sneaks downstairs to admire the ball, but the more she watches her sisters’ happiness, the more her jealousy is revealed through her magic. She quickly leaves.

Next we cut to the police station where Emma and Elsa are interrogating the Snow Queen. She plays coy, and Elsa gets frustrated. Emma convinces Elsa to check out the Clock Tower with David and Killian. Emma interrogates further, and while the Snow Queen isn’t fighting to get away, she isn’t cooperating either; she’s playing head games.

After the commercial break, Regina’s in her home, sulking and flipping through the Once Upon a Time story book, reading all of the “happy endings.” Henry walks in and asks his step-mother to tie his tie; Henry is working for his Grandfather, Mr. Gold (Rumpelstiltskin), in order to find out more about the story book’s author. Henry asks his mother what’s bothering her, but Regina only says she’s fine. She assures Henry that Operation Mongoose (the mission to find the author of the book) is her main focus now.

Emma is still interrogating the Snow Queen, but it’s getting her nowhere. She wants answers, but all the Snow Queen wants is to make Emma doubt herself and her family. It’s beginning to work.

Flashback to Arendelle. Gerda and Helga discover Ingrid packing her bags. She’s trying to run away, but her sisters protest. Ingrid explains that when she went to the ball she began to lose control. As she weeps, Helga tells them that she knows a powerful wizard in Misthaven (the Enchanted Forest), and he may be able to help. His name is Rumpelstiltskin.

David, Elsa, Killian, and Belle are in the Clock Tower observing the magic mirror left by the Snow Queen. Belle’s had an encounter with the Mirror before, but this isn’t the same one. What’s the deal? Then David realizes… the Snow Queen wanted to get caught. The Snow Queen casts a spell, freezing the entrance to the police station. No one’s getting in or out.

Robin Hood is shooting darts at Granny’s Diner when in walks Will Scarlet (the Knave of Hearts), one of Robin’s former Merry Men. The two drink at the bar, and Robin explains his situation. The Knave tells him that he once asked Robin’s wife why she would give up everything to live like an outlaw with him. She said that once you find the good in someone, you never give up on it. When Robin asks if it’s all worth it, Will tells him, “when you find someone that you love enough to ruin your entire life for, yeah, it’s worth it.” 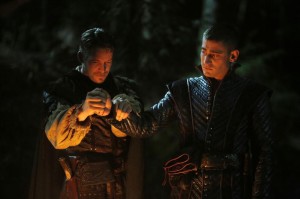 Skip to Mr. Gold’s Pawn Shop (more like Wonder Emporium). Henry asks if he can start learning about magic. Mr. Gold gives Henry a “potion” that can make old things new… and it’s furniture polish (nice joke, Mr. Gold). David, Killian, Elsa, and Belle enter. They need Mr. Gold to break through the Snow Queen’s magic. He agrees, but only for Belle. When Killian presses him on the matter, Mr. Gold tells him to mind his own business. 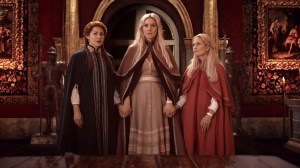 Back in Arendelle, the sisters go to Rumpelstiltskin, and ask if they can be rid of Ingrid’s powers. Well, Ingrid does; her sisters thinks that they can help her control them. Rumple offers her a pair of gloves that can help control the powers, and the urn that traps her as a fail-safe. All that he asks for in return are the ribbons, and the sisters reluctantly agree. He offers them a warning: 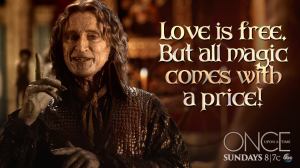 Back in Arendelle, Ingrid is alone under a pavilion when the Duke of Weselton forces himself on her. She accidentally uses her powers to push him away. He threatens her, and Helga enters. The Duke lies, blaming everything on Ingrid. Helga sees through the lies, and the Duke gets irate. Ingrid loses control once more, sending a fatal ice blast at him. But the Duke of Weselton pulls Helga in front of him (the cowardly git!). Ingrid stares at her ice-shattered sister, and faintly asks, “what have I done?”

During the present, Regina is back in her vault when Robin arrives. Before she can protest, he professes that he isn’t himself anymore; he’s in love. They share a kiss!

Mary Margaret, Killian, David, and Elsa have lost Emma; they’re worried and full of regret. They weren’t the family she needed them to be. Cut to Emma, alone in her buggy, crying and looking out over the city. The Snow Queen smiles into her mirror, looking into the past. Gerda finds Ingrid over the ice, and distraught, traps Ingrid in the urn. She goes to the Rock Troll Grand Pabbie, and he agrees to erase the memory of Ingrid and Helga from everyone in Arendelle.

The very last scene of the episode is The Snow Queen visiting Mr. Gold at his Pawn Shop. They strike a deal, the ribbons from her past in exchange for the one thing Mr. Gold needs to rid himself from the control of the dagger. He has the Sorcerer’s Apprentice’s Hat, and once she whispers in his ear the missing component, he says, “not only can I do that, but I shall do it with great pleasure.”

This episode’s storyline was excellent. The way that the creators and writers have woven all of these characters’ stories together amazes me. The special effects were top notch. The writing was great, and the drama was just enough to keep you entertained but not too much to where it felt like a teeny-bopper show. Overall this episode was fantastic. My only complaint was that not everyone got enough screen time.

If you missed the episode, you can watch it on Hulu. Once Upon a Time airs Sundays at 8/7c. Come back every week to check out my reviews! 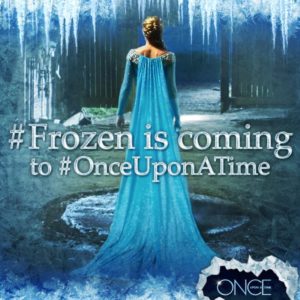 This episode had me on the edge of my seat, and the season can only get better!