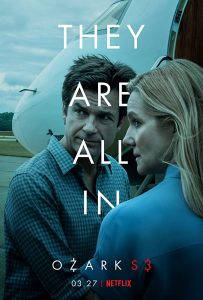 Ozark is an American Television series produced and distributed by Netflix. The series was created by Mark Williams, Bill Dubuque, and produced by Jason Bateman, who also stars in and directs multiple episodes. The series also stars veteran actress Laura Lenny and an up-and-coming performer named Julia Garner. Bateman was set to direct the entirety of the first season; however, scheduling conflicts did not allow this, which lead to Bateman setting the tone for the first two episodes. He also directed the season’s last two episodes. Ozark is set in a waterfront resort, which is loosely based on a resort marina in Missouri where the series creator Bill Dubuque worked in the 1980’s. The first season of Ozark was released on July 21, 2017. After receiving critical praise, a second season was greenlit and released on August 31, 2018. Season two saw an even greater critical reception, and the series was set to produce its third season which, premiered on Netflix on March 27, 2020.

For its first season, Ozark received positive reviews from critics. Season one got a Rotten Tomato score of 70%, with an audience score of 92%. Season two was met with an even better Rotten Tomato critic score of 76%, and an audience score of 90%. Its third and current season has reached a critical high by achieving a Rotten Tomato score of a 97% critic score with a 91% audience score. Metacritic scores the third season of the series with a 77 and IGN awards the third season with an 8 out of 10. Overall, Ozark has received praise for directing and acting. Currently, the series has received multiple Primetime Emmy Award and Golden Globe nominations. Bateman was awarded an Emmy for Outstanding Directing for a Drama Series along with Julia Garner for Outstanding Supporting Actress in a Drama Series in 2019. With its growing critical success, Ozark looks to be Netflix’s go-to crime drama for years to come. 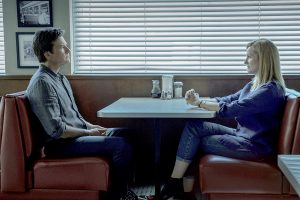 Spiritual Content: Mason Young is a young preacher who shares the word of God to the people of the Ozarks. Scripture and prayer is recited.

Violence: Ozark is full of sporadic violence. Though there might not be gore in every episode, when violence is featured, it does not hold back. Hand-to-hand combat, gun fights, gun shot wounds, stabbings, blood and gore can be witnessed. Scenes of torture occur.

Language/Crude Humor: The series is full of foul and crude language. Words such as F**k, B***h, A**, and many others are featured.

Sexual Content: One of the major settings of the series is a rundown strip club. Female nudity is frequent when scenes take place here.

Drug/ Alcohol Use: Alcohol is consumed regularly throughout the season, along with the use of cigarettes.

Other Negative Themes: The series focuses around the consequences of  living a life of crime. From the emotional turmoil of performing acts one normally would not have, to suffering the death of loved ones, the effect of such dealings can be long lasting.

Positive Themes: Although marital strife and discord pulls the husband and wife duo of Marty and Wendy apart, they seemingly find their way back to each other. Reconciliation amidst incredible circumstances is a major theme throughout the series. 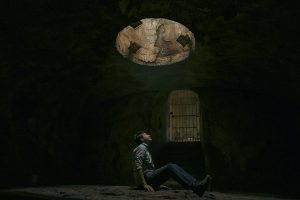 Season three of Ozark follows the Byrde family consisting of husband Martin “Marty” Byrde (Arrested Developments’s Jason Bateman), wife Wendy Byrde (The Big C’s Laura Linney) and children Charlotte and Jonah Byrde. While living in Chicago, Marty, a financial advisor, finds himself working for a Mexican drug cartel laundering money. After years of working with the cartel without an incident, an associate of Marty’s steals money from the crime organization without Byrde’s knowledge.

Once the cartel learns of the loss of money, they set out to eliminate the betrayers. Just before Marty is about to be killed, he convinces the cartel gangster to allow him to move from Chicago to the Ozarks where they would be free to continue to launder money away from the eyes of the FBI and award him the chance to repay the stolen money. After moving from Chicago and establishing residence in the small town of Ozark, Marty discovers creating a money laundering scheme in the backwoods of Missouri is not as easy as he thought it would be.

Marty and Wendy begin to buy up businesses in the town of Ozark in order to begin laundering money through these companies. Throughout their attempts to acquire influence, they encounter other criminal organizations and hometown thugs such as the Snells and Langmores. Season three continues with the Byrde’s pursuit for influence and power within the Ozarks to avoid any further conflict with the Mexican cartel. Marty and Wendy launch a casino boat on the lake of the Ozarks which will allow them to launder larger amounts of cash. The cartel is at war with another Mexican gang, which causes additional pressure on the Byrdes to supply even more laundered funds. Wendy begins to pursue further financial opportunities to increase their laundering operations, while Marty prefers to remain conservative as the FBI investigates their newly founded Casino. As conflict continues to further separate Marty and his wife, Wendy’s bipolar brother comes to town causing even more division between them. With the Byrdes on shaky ground, the cartel begins to lose its trust in the Byrde’s ability to keep up their end of their partnership. 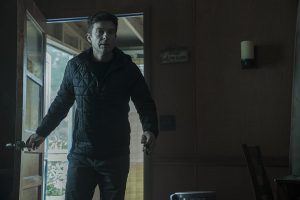 Ozark is one of the darkest series on any platform available today. Its overcast tone and overall heavy atmosphere is driven by its phenomenal directing and writing. It is refreshing to witness such a dramatic tone from a director who is mostly known for his comedy outings. Bateman successfully transports the viewer into this world of corruption, criminal activity, and family drama. He masterfully achieves a subtle yet terrifying quality by taking a “less is more” direction. Its decelerated pace allows for each scene to breathe for a magnification of intensity. Its slower tempo also allows for the occasional scene of extreme tension and violence to reach extreme emotional highs as a direct contrast to its normal stride.

The direction of the series can be attributed to its superb writing. Ozark’s writing is compelling, attention grabbing, and intense. Season three is very different from the  previous seasons, as season one and two focus on the family dynamics while trying to traverse the world of crime that was thrust upon them. Season three dives deeper into the operations of the Mexican cartel and its war against another crime syndicate. The current season follows the Byrde family now finding its way in this new world, yet diving head first into their new reality. The current season of Ozark more resembles a mob story similar to the Godfather or Sopranos. With this new change in direction, Ozark seems to find its footing. 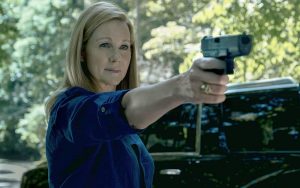 One of the major factors of Ozark’s success is its excellent performances. Not only does Bateman succeed in the series’ direction, but his execution in acting is extraordinary. Bateman has stepped further into dramatic roles as of late with roles in Ozark and HBO’s Outsider. His ability to send chills down your spine in dramas and uncontrollable laughter in comedies can lead to the argument that Bateman could be one of the most proficient actors working today.

Although Bateman’s performance is magnificent, it is overshadowed by the performances of Laura Linney and Julia Garner. Linney achieves a career high as Wendy Byrde. She embodies the persona of a crime wife. Her intensity will leave you at the edge of your seat. New York native Garner has been a series’ standout since the pilot. Garner portrays Ruth Langmore, one of Ozark’s backwoods, trailer trash families. Her spunky midwestern attitude is a perfect contrast to the Byrde’s city life style. Although the series is littered with amazing performances, the season stand out is Ton Pelphrey as Ben Davis. Pelphrey embodies the emotional turmoil of one suffering from bipolar disorder. Pelphrey’s performance reaches sporadic and energetic highs with emotional and heart breaking lows. His execution as Ben Davis is riveting and poignant. With an overabundance of top performances, Pelphrey stands above the rest.

Netflix’s Ozark is one of the streaming services’ highest achievements. With the world of streaming television growing exponentially, Netflix looks to remain on top with this gritty and dark crime drama. Partnered with a amazing writing, excellent directing, and standout performances, Ozark looks to be a major player in the television landscape. There is an ever- growing desire for more Ozark. Critics and audiences agree the show is their go-to crime drama. Season three has some pacing issues in regards to crisis fatigue. While one problem piles on another, sometimes very little room is left to catch your breath. In spite of this minor issue, season three of the series reaches its emotional peak.

Partnered with amazing writing, excellent directing, and stand out performances, Ozark looks to be a major player in the streaming landscape.