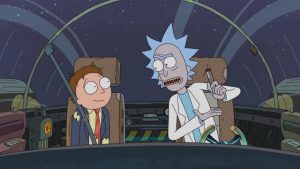 Rick and Morty is an American animated series created by Justin Roiland and Dan Harmon for Cartoon Network’s adult swim late night time slot. Inspired by an animated short created by Roiland entitled “The Real Adventures of Doc and Marty” (which in itself is based on the modern classic Back to the Future), Rick and Morty premiered on December 2, 2013 to rave reviews. The series went on to complete three critically acclaimed seasons for Cartoon Network. Rick and Morty has been nominated and won multiple awards including The Prime Time Emmy Awards, BTVA voice acting awards, The Saturn Awards, The Golden Globes, and many others. Rick and Morty’s third season (which concluded in October 2017) was awarded the title of Television’s #1 comedy series for adults 18 to 34. Naturally, with such a cult following and universal critical reception, in May 2018 Cartoon Network ordered an additional 70 episodes of this historic series. On May 15, 2019, Cartoon Network announced season four of Rick and Morty will begin airing on Adult Swim in November 2019 to many fans’ delight.

As anticipation grows for new material, Rick and Morty lends itself well to multiple rewatches. Every episode is packed with fast-paced humor, thought-provoking concepts, and punchy one-liners that can easily be missed. Upon rewatching the episodes, I have discovered hidden references, concepts, and quiet jokes that went seemingly unnoticed during my first watch. I invite you to join me in rediscovering and/or introducing you to the series as I dive into and analyze every episode while we try to patiently wait for the new season.

Spiritual Content: God was thanked by one of the characters. Another character denounces the need to give thanks to God.

Violence: Characters use gun violence to kill monsters. A character  is covered in blood after surgery. Jerry beats Daven, who transformed into a monster, to death with a crowbar. Jerry runs a number of monsters down with his car and brutally cuts them down with a sword as Beth shoots the human monster hybrids down with a shotgun.

Language/Crude Humor: The words B**ch, A** , and D**k are used through out the episode.

Sexual Content: Brad expresses his love for Morty and fondles him. Jessica asks Morty to rip her clothes off and mate with her for life. Daven asks Beth about Morty’s  privates.

Drug/Alcohol Use: Rick drinks alcohol from a flask throughout the episode.

Other Negative Themes: Abandonment. Instead of Rick resolving is errors, he decides to give up on his world.

Positive Content: Jerry and Beth’s failing relationship reconciles and becomes better in spite of the fall of humanity.

Morty walks down the hall at school and tries to ask his crush Jessica to the school “Flu” dance. After being shot down, Morty returns home and asks Jerry (his father) for advice about girls. Rick enters interrupting Morty and Jerry’s conversation, reminding them Jerry is in a failed marriage and love is just chemical reactions in the brain. Morty finds Rick in his lab and asks him to concoct a love potion in order to make Jessica fall in love with him. Rick reluctantly creates such a potion. He hands the vile of love potion to Morty and tells him anyone who he applies the potion to will love him and only him forever. Morty asks if there are any side effects, and Rick says no. Morty walks out of the lab and closes the door behind him just as Rick says “unless she has the flu.” 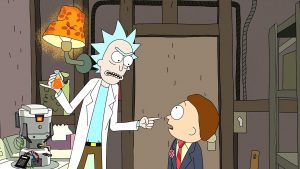 After the conversation he had about his failing marriage with Rick, Jerry asks his wife Beth if she loves him. Beth is annoyed by his neediness and questions. She explains loving him is a chore and a lot of work. Beth receives a call and is called into surgery after a tragic horse racing accident as she is a horse surgeon. Beth tells Jerry she has an emergency surgery to perform and her associate Daven is by himself. Jerry looks on suspiciously. 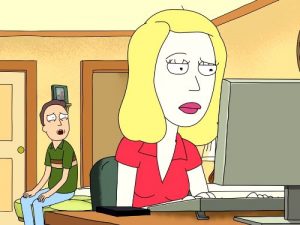 Morty walks through the dance looking for Jessica. Finally, he sees her and smears the love potion on her arm. Jessica turns to Morty and expresses her love for him and caresses him. Brad, a school jock, sees the embrace and thinks Morty is violating Jessica. Jessica scolds Brad and professes her love of Morty as some of her sputum consisting of the flu virus which has been altered by the love potion enters Brad through his mouth and begins to change his DNA. Now affected by the potion, Brad also begins to profess his undying love for Morty. Brad begins to grab Morty, which leads him to be dragged out of the school dance by faculty. As Brad screams out for Morty’s affection, he expels manipulated germs which land in the punch bowl. 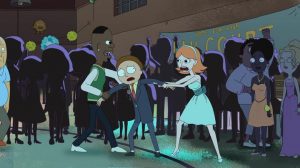 Meanwhile, Summer and Jerry are in the living room as Summer explains to her father that his lack of self-confidence is pushing Beth away. Rick enters and tells Jerry Beth probably used the excuse of a late night surgery to cover for an affair. Jerry decides to pay Beth a visit at the horse hospital. Rick asks Summer why she didn’t go to the school dance. She tells Rick she didn’t want to go because she did not want to get sick due to the fact it is flu season. Rick expresses worry.

While Morty and Jessica are dancing, more party goers are infected by the manipulated love virus and begin to chase Morty with physical desires. Rick arrives to help Morty escape in his flying car just in the nick of time. Rick explains he was unaware of Jessica’s sickness and the potion has a negative side effect if it comes into contact with the Flu virus. Rick creates an antidote which he concocted out of praying mantis DNA and spreads in over the crowd of people below who are chanting for Morty’s love. The mass of people wake up from their lustful cries. Suddenly, the entire crowd of people transforms into horrific humanoid praying mantis hybrids. 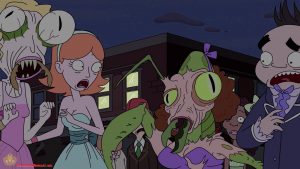 Jerry is attacked by humanoid mantis monsters while on his way to see Beth. Summer is also attacked by the mantis monsters. Rick’s antidote seems to have affected the entire world turning everyone into monsters who are in love with Morty. Jerry reaches the veterinary clinic just as Beth’s coworker turns into a mantis monster and attacks her. Jerry saves Beth by killing the monster, which reignites the passion in their marriage. Meanwhile, Rick creates a new antidote to counteract the effects of his last concoction. After releasing the new potion into the air over the crowd, it morphs the mantis monsters into hideous, slug-like, grotesque, inhuman creatures. 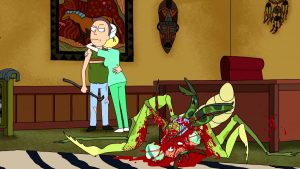 Rick and Morty relent over the catastrophic metamorphosis they caused turning the world into monsters. After blaming each other for the disaster, Rick devises a relative solution to their problem. Rick and Morty exit a dimensional portal into their home garage of an alternate dimension just after this dimension’s Rick and Morty die from an accidental explosion. Rick explains in this dimension, the genetic catastrophe they caused was resolved, turning everyone back to normal. The only difference from their dimension and this one is their alternative selves died, which will allow them to fit in seamlessly.

Rick and Morty bury the bodies of their alternative selves as Morty tries to come to grips with the loss of his world and dead alternative self.  Rick makes himself at home as if nothing has occurred, while Morty observes the alternative dimension’s surroundings and family. He is in shock in regard to the similarity. Meanwhile, in our original dimension, Jerry, Beth, and Summer are happy and Jerry and Beth’s marriage problems have been resolved despite (or because of!) the disappearance of Rick and Morty and the world full of monsters. 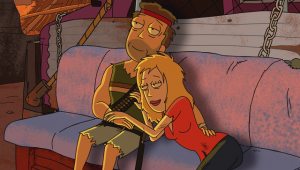 Although it starts off slow with a mundane plot, Rick Potion No.9 quickly becomes one of the greatest and arguably most impactful episodes to the entire series mythology. In this pinnacle episode, the entire structure of the Rick and Morty mythos is turned upside down. The relationships between characters are changed, the population of the world has changed, and the world we as the viewer have observed since the inception of the series has changed.

One of the most dramatic relationship changes in this episode is the dynamic between Jerry and Beth. The entirety of the series up to this point depicts a toxic, unhealthy dynamic between the two. In the beginning of the episode, Jerry is shown to be a needy, insecure man who has no job or ability to provide stability and security to his family and wife. Beth is cold, belittling, unsympathetic, and refuses to express affection toward Jerry. During the events of the episode, Jerry transforms into a confident man who can provide security to his wife by saving her from the monsters that inhabit the world. Beth, almost dying at the hands of a monster, is saved by Jerry and transforms from being unloving to a nurturing, affectionate spouse.

Rick’s abandonment and destruction of their world causes Morty to see Rick from a different perspective. Prior to the events of this episode, Morty viewed Rick as an idol who he looks up to and admires.  After the circumstances of Rick Potion No. 9, Morty sees Rick as an egotistical, self-centered, nihilistic, and detached individual. This shift in their relationship dynamic continues throughout the entirety of the series. Rick and Morty takes a major step in their mythology in this episode.  As one of the darkest episodes in this series, Rick and Morty exceeds in dark comedy on every level. The series continues to succeed in combining high concept scientific theory with deep relationship dynamics.