[amazon asin=http://www.amazon.com/Sonic-Underground-The-Series/dp/B000W04RXY/ref=sr_1_1?ie=UTF8%26qid=1414443315%26sr=8-1%26keywords=Sonic+Underground&text=Amazon]Think about Sonic for a moment. The games, the attitude, the speed, but what about his creative side? Believe it or not, Sonic did have his own band at one point. In fact, his band was the center of the third Sonic TV Series, Sonic Underground .

Wait a minute, WHAT? Sonic the Hedgehog, the amazing blue blur, singing? Really? And that the center of a TV Show? What good could come out of that? Well, a lot.

Sonic Underground took a TOTALLY different road that Sonic the Hedgehog (known as SatAM because it aired on Saturday mornings) or Adventures of Sonic the Hedgehog (AoStH). It’s probably the farthest from the Sonic video game series Sonic has ever gone.

Considering this, you’re probably thinking that Sonic Underground is a cheap attempt to cash in on the Sonic series with the “IT SAYS SONIC ON IT!!!” approach, but this would be a flawed assumption.

Sonic Underground starts off very similar to SatAM. Aleena, Queen of Mobius and mother of Sonic and his two siblings, Sonia and Manic, is warned by “The Oracle of Delphius” of Robotnik’s takeover. Aleena is told that she and her children will reunite and form the Council of Four and defeat Robotnik. She is then forced to give away her children and go into hiding. Robotnik takes over Mobius almost entirely, polluting it with a huge ship that destroys almost everything it its path (very similar to Robotnik’s ship in SatAM). Sonic is given to a middle class family. Sonia is given to an aristocrat. Manic’s original home is not revealed, as a thief stole him from the doorstep of the woman he was meant to be left with.

Robotnik’s takeover proceeds though he is not fully aware of the Hedgehog’s existence or threat, though he was told of it by the Oracle.

The Aristocrats are taxed by Robotnik, becoming the source of Robotnik’s money, while the poor are turned into robotic slaves in his empire.

Sonia lives in a rich home, so her family is not sought after. Manic lives in a sort of hideout, as he is a thief like his father, so he is not found. Sonic is forced to flee his home because of the Swat Bots who invaded and later burned down his house. Later on in life, Sonic is seen attacking Robotnik’s bases without being identified. Robotnik hires bounty hunters Sleet and Dingo to stop him. They discover that he is a hedgehog, and Robotnik remembers the prophecy he was told by the oracle. He declares war on the Resistance, which is the main plot for the rest of the series.

This volume from 2007 includes the first twenty episodes of Sonic Underground. Also included is a disk of Sonic Underground’s “greatest hits” (“Sonic Underground,” as in the band, not the show), which brings us to the music. Each episode has a song about one minute and twenty seconds long. The executive producer, Robby London, stated in an included interview that the songs were meant to be written in such a way that if they were taken out of the context of the show that they would still be considered good music, yet also remaining relevant to the events of the episodes where these specific songs are featured, such as “We Need to be Free.” He also said that there were exceptions, such as “Let’s Do It to It.” But to be quite frank, all of these songs are garbage. Sorry Sonic. I love ya man, but you can’t sing or even write for that matter. I recommend just fast forwarding through the songs. Now, let’s get off of that topic.

What about the episodes themselves? Well, like I said, the series begins like an altered version of SatAM, but it’s when the show starts to get far into the lives of random supporting characters that I skip to the next episode. One time Knuckles was brought into the show, but his voice actor didn’t fit well, and Knuckles was given an annoying personality.

On to the subject of main characters: Sonic, his brother Manic, his sister Sonia, their mother Queen Aleena, Robotnik, Sleet, and Dingo. 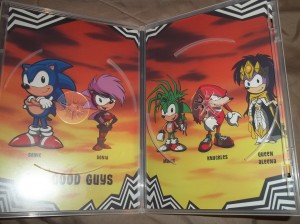 Sonic starts good in the beginning, and I can’t emphasize enough how it relates to his SatAM self. Later on, he becomes slightly childish, sometimes even rude. But he remains enjoyable throughout this volume as a whole. He’s the guitarist of Sonic Underground

Manic honestly is a quality character. He’s not annoying or arrogant, but actually interesting. He is a recovering thief, only stealing from Robotnik on most occasions. He is the band’s drummer and is also Sonic’s brother.

Sonia is pretty annoying at times. Dingo, a bad guy, has a crush on her and she hates him, so that is all there is to that relationship. Her voice is weird, especially when she cries, probably because she is a female voiced by Jaleel White, who also does the VA for Manic and Sonic. She is the keyboard player for the band and Sonic’s sister.

One thing I don’t like is that the band as a whole uses their instruments as weapons in a childish manner more than they use their individual gifts, such as Sonic’s speed, Sonia’s super spin, and Manic’s drumstick-wielding as weapons.

Queen Aleena is neither good or bad. Sonic has never really had a mother, so the swagger of a lone fighter kinda gets lost here. She makes a few appearances in the show, and narrates in the beginning of every episode. She is Sonic, Sonia and Manic’s mother. 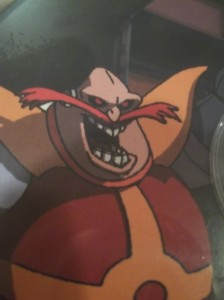 The show does do justice to Dr. Robotnik’s character. He is voiced by Gary Chalk, the same person who did Grounder in AoStH. But, he doesn’t use that same voice at all. Robotnik’s personality very much leans toward, you guessed it, SatAM. He is the dictator of Mobius and hates all things happy or fun.

Sleet is a wolf and one of two bounty hunters Robotnik hired to catch the triplet Hedgehogs. Sadly, places where Robotnik or his Swat Bot army could be, there’s Sleet and his idiot friend Dingo instead! While he could have been a good short-term character, he never really contributed anything to the show valuable enough to replace Robotnik.

Dingo is an idiot (and a dingo). He can have his form changed by a remote Sleet uses. This makes for some weird moments when Dingo is changed into a girl. He has a crush on Sonia but she hates him, so there are interactions between them that are funny or annoying.

It’s a Sonic show. Sonic Games are almost always clean. So none of the bad stuff here. The worst was the rare cleavage on one character or another. It is also curious that Queen Aleena is never seen as married, despite the fact she had triplets.

There are traces of conjuring in the show. There’s an oracle who has powers and shows the future. There are some stone statues on an island shaped like Sonic, Sonia and Manic. These are referred to as the guardians and seen as something like a god, but not too heavily.

So what are some good points in SU? Well, it’s a clean, decent show with lots of action and adventure. Classic Swat Bots and Robotnik are in almost every episode. Sonic’s obsession with Chili Dogs is still here. So to say the show is more bad than good is a lie. It’s enjoyable in most cases, and I find myself watching the first of three DVD’s the most.

As a child, I simply adored Sonic Underground. I loved the CD, would watch the show all the time, would think of my own plot ideas, and would get so excited when Queen Aleena showed up. Though I have turned more towards SatAM and Sonic X, this show still ranks higher on my list than AoStH.

That’s my review for Shout! Factory’s Volume One of Sonic Underground. Would I buy the last volume as well? Probably.

Sonic Underground is definitely an OK series. It's not as good as SatAM but not as childish as AoStH.