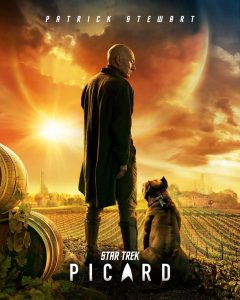 Following the tepid success of the first two seasons of Star Trek: Discovery, CBS All Access has delivered its second series based on the famous franchise created by Gene Roddenbery. Star Trek: Picard brings back one of the series’ most popular characters for the first time since Star Trek: Nemesis in 2002.

Spiritual Content: Most of the characters on the show are open atheists or nihilists.

Sexual Content: Some romantic situations, but nothing depicted; some cleavage is shown.

Drug/Alcohol Use: Most characters drink and smoke heavily; Picard owns his own winery. 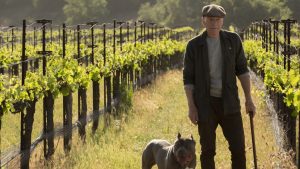 Modern Star Trek has developed a distinctive distaste among fans of the fifty-four-year-old science fiction series. Star Trek: The Original Series and Star Trek: The Next Generation were both beloved for their intelligent writing, optimistic tone, and forward-thinking themes. This was all an extension of series’ creator Gene Roddenbery’s optimistic futurism. He wanted to give people a vision of the future where issues like racism, human conflict, and poverty were things of the past. New Star Trek series like Star Trek: Discovery are rooted in a contemporary nihilism. They’re much more cynical reflections of modern day issues of resurgent nationalism, political extremism, and resentment against refugees.

Additionally, these new series are far more superficially “edgy” than previous iterations. Characters curse, commit brutal acts of violence, and openly discuss sexuality. They’ve forgone their family-friendly content in favor of appealing to teenage viewers and adults. Any viewer’s opinions on modern Star Trek are ultimately going to come down to a question of priorities. Can you abide by a series that reflects modern issues rather than offers an optimistic alternative to them? Can you overlook or embrace some of the overtly ham-handed political posturing? Can you abide by characters dropping the F-bomb in Star Trek? 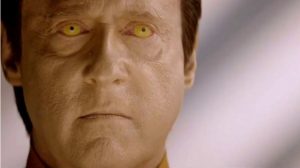 In that, the first season of Star Trek: Picard is formed on a rather proactive thematic core. In Star Trek (2009), the Romulan home world was destroyed in a massive supernova which killed billions of their species and trapped Ambassador Spock in the distant past of an alternate dimension. Following the disaster, Picard tried to rally Star Fleet to aid the Romulan people and evacuate millions of them to new worlds (similar to Star Trek VI: The Undiscovered Country). When Star Fleet refused to come to the aid of its former adversaries, Admiral Picard resigned. Fourteen years later, Picard is retired once again to his winery and is offering to give his first public interview since his retirement. When he finds out a young woman he meets may be one of Data’s estranged daughters (following his death in Star Trek: Nemesis), he gathers a crew of dissonant scientists and fighters to track one of them down and protect her from Romulan terrorists.

At its core, there’s something quite clever and fun about the series. Doing an in-canon series drawing upon grittier modern sci-fi series like Firefly and Guardians of the Galaxy is interesting. It separates the series and gives it a new identity in the franchise. This series is a great deal more scrappy than it’s contemporaries and relishes in the chance to take its characters on a joyride around the grimier edges of the Star Trek universe. Unlike previous iterations, Picard is the first series that’s primarily character focused and not based around a traditional ensemble. Jean-Luc Picard is the central character who’s motivations drive the story and events. Most of the actors from TNG show up in minor roles, but they aren’t the primary characters. 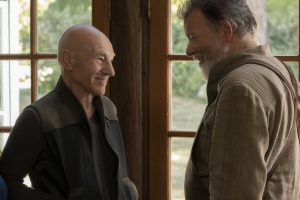 Again though, you’re going to have to roll with the punches. Star Trek: Picard doesn’t want to inspire its viewers so much as it wants to castigate the greater whole of modern society for rejecting the values of Star Trek: The Next Generation. From the interview scene in the first episode, the series wants you to reflect on how its themes reflect on the modern world. The show isn’t pulling punches. If you’re a politically aware person, it’s not hard to figure out who represents what in modern parlance. Doing a series about characters circumventing the system to find justice goes against Star Trek‘s general thesis that the system can be perfected and made to serve the prosperity of all living beings. This is a story about the system being wrong. It’s a story about the people suffering when the system doesn’t do its job or chooses to embrace selfishness and fear.

On its own terms, the first season of Picard isn’t much to write home about. It’s a bizarrely convoluted story that arbitrarily locks away plot reveals necessary to understanding the stakes of the story and drags them out until the finale. Coming from the screenwriter of Star Trek Into Darkness, none of this is surprising.

None of this actually serves to build the story in an emotionally impactful way. The story does somewhat come into focus in the two-part finale when the actual stakes of the plot boil down to a single decision one character has to make, but by then we’ve endured 10 hours of wheel spinning. By the fifth episode, I was starting to check my metaphorical watch, asking why this plot had ground to a halt for an entire throwaway episode. The answer was the story needed to set up characters and concepts it would need later, but instead of working them into the narrative, the film just creates mini-story arcs for characters who aren’t imperative for the overall narrative of the story. At least a small handful of characters could’ve been cut out of the plot entirely. 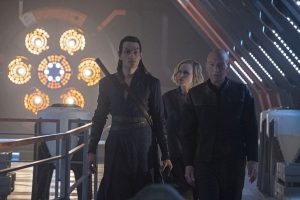 The result is a story that’s mostly just filling space. For a story that’s supposed to be about Admiral Picard’s ideological break with Star Fleet and the redemption of the federation, the show spends an awfully large amount of time villainaizing the Romulan survivors as renegade terrorists. As we find out toward the end of the season, they have a reason to be legitimately worried. If this is supposed to be a story about how fear clouds our judgment and harms our humanity, why should the Romulans running around killing people out of fear while they’re also the victims of Federation’s fear not cloud any thematic clarity?

As it stands, I knew the season wasn’t working for me when it ended with two MASSIVE character deaths. The latter was somewhat poetic, but the former was emotionless and immediately undone within five minutes, similar to Kirk’s “death” in Star Trek Into Darkness. It’s a very ambitious story with tons of ideas and characters that doesn’t fully form into something by the season finale. Even by this point, the story has lost the thematic core of its story, so its emotional stakes are pointless. Star Trek: Picard isn’t a train wreck, but it is a convoluted mess. I appreciate its trying to tell a story with deeper ideas. Patrick Stewart was a major creative voice at the development stage, and it’s clear he only came back because the story interested him. It’s a shame the season as a whole is such a mess. 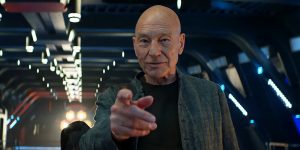 Star Trek: Picard is proving to be quite controversial among fans of Star Trek, and it's not hard to see why. It's a vast jump in tone and style from Star Trek: The Next Generation, and its gone miles out of its way to castigate its audience for their complicity in real-world political issues. Even on its own terms, it's a convoluted and messy story.