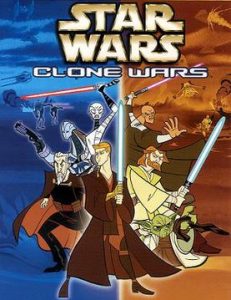 In the leadup to Star Wars Episode III: Revenge of the Sith, Lucasfilm commissioned a series of animated shorts that premiered on Cartoon Network between 2003 and 2005 which followed the events that took place between the second and third Star Wars Prequels. Lead by animation legend Genndy Tatakovsky, the series is fondly remembered by Star Wars fans as the official lead in to George Lucas’s final foray into the franchise.

Violence/Scary Images: Lots of action, gun shooting, sword fighting. Minimal onscreen carnage and no blood
Language/Crude Humor: Some gross comedy, characters eat bugs
Sexual Content: None
Drug/Alcohol Use: None
Spiritual Content: A character goes on a vision quest and sees his own future, characters are spiritually in touch with an all powerful spiritual energy
Other Negative Themes: Themes of temptation, disobedience, and inevitability
Positive Content: Themes of sacrifice, courage, and struggle 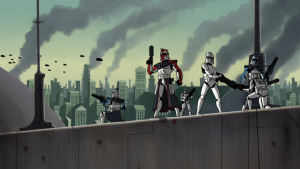 The Star Wars Prequels are weird. I’m sure that’s not too controversial of a statement, but they’re movies defined by strange eccentricities, priorities, and fetishes. On paper, they’re about the corruption of the Old Republic and how the good intentions of the people are twisted to the whims of the Dark Side and contribute to the rise of the Galactic Empire. In execution, though, they’re slow-paced political dramas that focus on minor details in bizarre ways.

The Phantom Menace dedicates an entire movie to explaining the political machinations of one relatively unimportant planet in the midst of a time when interstellar corporate entities are so powerful they’ve effectively rendered the Senate defunct as an institution. For some reason, the union of the Naboo peoples and the Gungans is vital to the overall meta-narrative of the franchise despite the fact Naboo is irrelevant after that. Attack of the Clones is a murder mystery and a conspiracy thriller that ends in the largest battle in the history of the galaxy. Revenge of the Sith skips the entirety of the Clone Wars until the very end to explore how the Chancellor twisted Anakin Skywalker into serving him and destroying the Jedi Order. 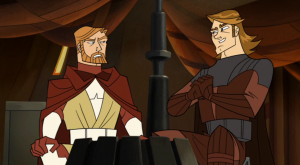 You’d think more time would be dedicated to just that journey, but the two previous movies spend enormous amounts of time filling in the blanks of every story element you can imagine. I find these eccentricities fascinating. The world setup in the Star Wars Prequels is enormous, nuanced, and brimming with potential. Despite this, these movies are not good movies. They’re the most heavily scrutinized movies in the history of cinema for good reasons. They’re loud, clunky, overly expository, and poorly executed action movies that fundamentally alienated fans of the original trilogy. That doesn’t mean other writers haven’t taken advantage of the situation to tell unique stories using this immense wealth of worldbuilding. Many great books, video games, and TV shows have been told in this period of the Star Wars universe, thanks in large part to George Lucas’ desire and ability to market Star Wars better than any franchise in history. 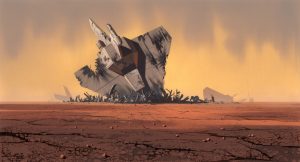 Maybe my favorite stories set in this time period are the Clone Wars cartoons produced by Cartoon Network. There have been two renditions of them. The most recent and popular one is the Dave Filoni produced 3D animated series which premiered in 2008 and is currently being revived for a seventh season on Disney+. The other is a 2D animated series of shorts produced in the leadup to the third prequel movie. Narratively they’re quite strange. They’re hobbled by the reality that these characters have a set beginning and end point between episodes two and three. This limits much of what you can do dramatically with these characters. Still, they use the space to fill in other stories and highlight interesting moments of foreshadowing in between the main Saga films.

The one I’m going to focus on today is the first of the two cartoons. Produced between 2003 and 2005 in the form of shorts, it was brought to life by animation legend Genndy Tartakovsky. He’s well known as the creator of some of Cartoon Network’s best early 2000s work like Samurai Jack and Dexter’s Laboratory, and had a hand in the creation of The Power Puff Girls. His recent works include the Hotel Transylvania Trilogy and Adult Swim’s recent miniseries Primal. If you’re familiar with these shows, then you’ll have a solid idea of what to expect going into the series. Like those shows, Clone Wars brings the same house style of minimalist and action-focused storytelling to Star Wars he brought to his original works. 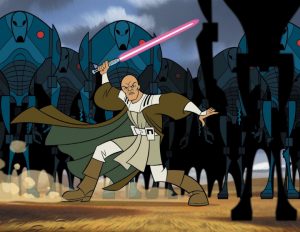 The series can effectively be cut in two, as it has for its original two-part DVD releases. The first half of the series are 3-5 minute action-focused shorts set in the immediate aftermath of the Battle of Geonosis. The second half of the series are much longer 10-12 minute shorts set in the weeks prior to the Battle of Coruscant. Narratively speaking, that’s a three year time gap. There’s a huge change in tone, pacing, and narrative between these two halves. Giving the series more time to breathe meant stories could be fleshed out and explored. As a result, the story evolves and deepens as it goes along. On its own, the overall story isn’t all that functional. These shorts were designed to be shown over the course of weeks in short bursts of action between major Cartoon Network programming as part of the lead up to Revenge of the Sith. Because of this, when played in order without a break, the pacing can be a bit unrelenting. The breathlessness between action scenes will probably turn off most viewers if you try watching them all in a row. 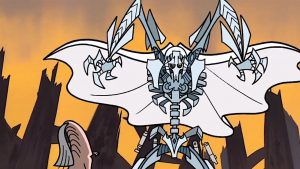 Problems aside, Clone Wars is legitimately awesome! I’m not shy about the fact I’m quite fond of the aesthetics of the Star Wars Prequels. With the major issues of poor acting and execution gone, what you’re left with is a pure distillation of the best aspects of those movies. Given Star Wars has always been an action-focused series, boiling it down into its simplest elements works. Being told in the form of an anthology series, the shorts all address different battles and characters during the time period of the Clone Wars and gives lots of minor characters a chance to shine. Mace Windu gets scenes that fully deliver on his status as one of the most powerful Jedi Masters in a way none of the movies did. Totally obscure Jedi like Shaak Ti, Luminara, and Kit Fisto get elevated in importance and fleshed out. On the side of the Separatists, the series gives us introductions to two fan favorite villains in the series: Assajj Ventress and General Grievous. Both characters make their first ever appearances here and later were expanded upon further in movies and TV shows. 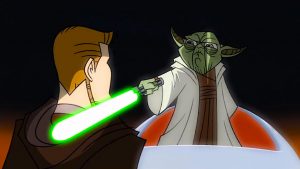 The main story that reappears constantly in the series follows Anakin Skywalker’s continual path towards the dark side as we see him elevated to the rank of Knight and tempted by the Dark Side repeatedly. His story deals with his relationship to the Jedi and how the needs of the war make it necessary to promote him to the role of a full Jedi Knight without having undergone more than two of the three trials. The third, the trial of the mirror, is the most important one and without it, the Jedi don’t know his full potential. It becomes clear later on this is a trial he certainly wouldn’t have succeeded passing given the visions he starts having late in the series which foreshadow his future as Darth Vader. This all reflects the themes of the prequels and gives context as to why the Jedi Council would continue to make bad decisions around a Jedi they all fear could be destructive. They had no choice. The machinations of Darth Sidious were enough to twist their arms and dictate that Anakin rise within the order as he’s simultaneously tempted to abandon them. 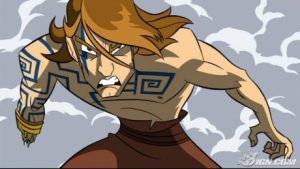 All of this is explored with the same efficient style Tartakovsky brought to all of his animation. At times, his minimalistic style can create strange continuity issues and occasionally breaks the relatively realistic physics of Star Wars, but that hardly matters. It’s clear Tartakovsky had to work within limitations in terms of budget and time, so there are cut corners. There’s a lot of recycled 3D assets being used in the show, which doesn’t pair well with the 2D animation. You’ll get sick of seeing the same ship models and droids fighting each other over and over again. The more unique assets created just for the cartoon are infinitely more interesting, and thankfully they all get good showings. This show’s strengths definitely overcome its shortcomings.

If you missed Clone Wars when it came back in its original run, it’s more than worth seeking out now. It’s been out of print now and isn’t officially recognized as part of the Disney Canon despite loosely connecting to the second Cartoon Network series The Clone Wars. If you can’t find the DVDs used anywhere, the entire series has been uploaded to YouTube in its entirety multiple times and is easy to track down. Even if you don’t like anything about the prequel trilogy, I’d recommend giving it a chance. This show does more in two hours than George Lucas was able to accomplish in an entire trilogy. 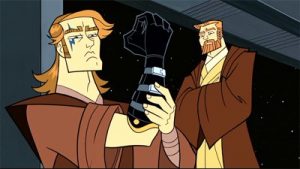 If you enjoy Star Wars and didn't catch this back in the day, definitely go back and watch this now! It's a fun couple of hours that represents some of the best-told stories in the Prequel era.