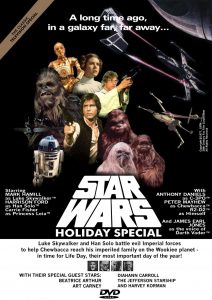 There aren’t many Christmas movies that are necessarily good movies on their own terms. Sure, there’s It’s a Wonderful Life and Miracle on 34th St., but most of them are Hallmark movies or broad comedies when you get right down to it. Sometimes however, filmmakers limbo under that low bar with malice. In the leadup to the release of The Rise of Skywalker this holiday season, I took a look at one of the most infamous holiday related films ever produced for television.

Violence/Scary Images: A character falls to his death offscreen
Language/Crude Humor: None
Sexual Content: A character is shown a projection of their desires which carries implied sexual overtones, nothing graphic or implicit
Drug/Alcohol Use: Characters drink and smoke at a cantina
Spiritual Content: Characters celebrate a vaguely spiritual holiday
Other Negative Themes: None, kid friendly
Positive Content: Themes of fighting evil 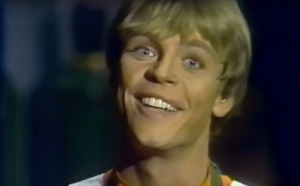 Star Wars is seen in many film circles as the transitional film that moved Hollywood from the artist-driven movies of New Hollywood in the 1970s to the Blockbuster mania of the 1980s. It was a movie that could’ve only existed in a time of intense risk taking, but its immense success taught Hollywood the way to be profitable going forward was to embrace high octane action and genre films. Thus, the New Hollywood of The Godfather and Raging Bull became the Modern Hollywood of Rambo And Terminator. Maybe it’s appropriate in some ways that the most overtly cynical and capitalistic endeavor in the Star Wars franchise at the time was the kind of cocaine-addled decision that would make Jordan Belford proud.

The year after Star Wars premiered in 1977 was a time of immense success for George Lucas. Because of the insane risk of the film from a conceptual level, Lucas had managed to squirrel away the merchandising rights to his new franchise. 20th Century Fox only held the distribution rights and only made money on rentals and ticket sales. All the toy and promotional sales profit went straight to George. He struck gold. While Director Irvin Kirshner and Fox set away to start working on their immediate sequel, Lucas set to work on building his own personal empire. 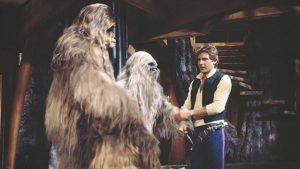 That empire unfortunately wouldn’t be without sin. On November 17, 1978, a television produced spin-off of the new movie appeared on television for one time only on CBS. It would quickly go on to become a legend of television; one nobody involved with the project would ever willingly discuss again. Lucas himself was quoted as saying, “If I had the time and a sledgehammer, I would track down every copy of that show and smash it.” It would never be seen again in any official capacity, but the legend of the mysterious Star Wars Holiday Special began to brew. As it stands, all available copies of the special are bootleg copies transferred to a handfull of VHS copies recorded from the night of the broadcast. The closest thing to a legal available copy is the version I purchased through Rifftrax which comes with commentary from the cast of Mystery Science Theater 3000. In truth, this might actually be the only watchable version. 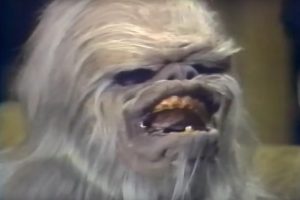 The Star Wars Holiday Special is a mess. It’s a hilariously cataclysmic mess that forgoes the appeal of the franchise’s focus on action and characters and turns it into an excruciatingly long TV special. There are no original action scenes that aren’t just recycled special effects shots from the first Star Wars movie, so all of the original content is…not that.

The “story,” if I may liberally call it such, is Han Solo trying to get Chewbacca back to his home planet of Kashyyyk in time for Life Day. We don’t know what Life Day is, but it’s apparently of great spiritual importance. The body text of the special is a series of musical numbers, comedy sketches, and cameo appearances by Star Wars characters and celebrities. 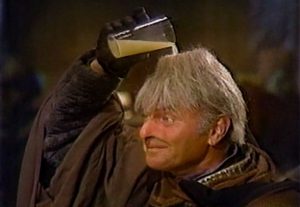 It reads entirely like the cast of SNL tried to make a Star Wars spin-off but didn’t bother to put the work in. The jokes aren’t funny. The songs aren’t entertaining. The cameos are all forced and embarrassing. Most of the actual time in the film is dedicated to watching Chewbacca’s Wookie family running around and interacting with the musical numbers. There are no subtitles for any of the Wookies, and they have dozens of minutes of uninterrupted screen time. 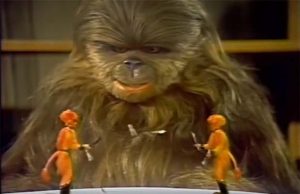 It is bizarre to watch it playout. It’s not exciting or interesting. It’s just an experience of perpetual disbelief. I already knew most of what happens in the film based off seeing numerous reviews and montages of the film on YouTube, and it’s still bizarre.

The individual segments are more tolerable than the Wookie material at least, as we get characters who speak dialog we understand, but the sketches and musical numbers have nothing to do with the actual plot. If I were being charitable, I’d say this was some kind of attempt to do a Richard Linklatter-style slice-of-life TV film, but I’m not convinced that much actual thought went into these sketches. 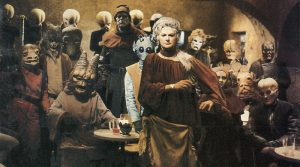 The cast of celebrities doing most of the work here reads like a veritable list of quasi-relevant late 1970’s celebrities. Beatrice Arthur, Art Carney, Diahann Carroll, and Harvey Korman all do most of the “legwork” with the comedy/musical sketches. Even the band Jefferson Starship shows up briefly. Don’t take my word that any of this means anything. I’m a dumb millennial and I’ve never watched Golden Girls or anything these people have been in. I can only tell you the names because they’re all announced at the beginning of the special. I’m sure this is nostalgic for someone… 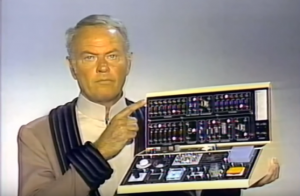 The sketches range in bizarreness from a video of Harvey Korman pretending to be a droid that teaches you how to repair a transmitter, to a scene of what can best be described as PG interstellar pornography (which entirely comprised of Diahann Carroll singing to the camera for an uncomfortably long time). There’s a cooking segment with a three armed Harvey Korman in drag and a cozy bar song set at the Mos Eisley Cantina.  If it isn’t merely cheaply made, it’s designed to reuse props from the prior movie. 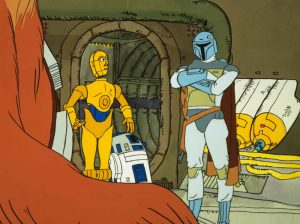 The most famous sketch is, of course, the horrifically animated cartoon where Luke Skywalker officially meets Boba Fett for the first time on an alien planet. It’s fascinating as a relic and easily the most entertaining part of the special. However, it’s awkwardly animated and barely holds up to scrutiny. Naturally, this is confusing as it’s supposedly taking place within the Star Wars universe, which means an Empire-occupied planet gets television broadcasts that show Rebel propaganda on it. This Rebel propaganda also has beyond classified information in it that is extremely pertinent to the plot of the next film. 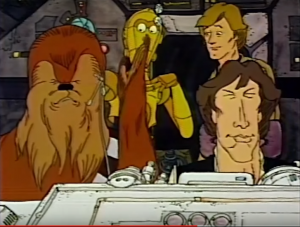 That doesn’t really matter of course. None of this is intended to fit together in any sort of logical or coherent way. It’s a real-time session of throwing things to the wall to see what sticks. The characters using a Jefferson Starship music video to distract an Imperial soldier isn’t there to forward the plot; it’s there to give us an excuse for a musical number. It’s not hard to see why everyone involved in its creation hates it.

That’s not to say this special isn’t adored in some ways by Star Wars fans. This movie famously floated around the bootleg VHS community for decades and it’s remained a transgressive ironic cult classic and a testament to bad decision making. Obviously parts of this have been widely embraced in the culture. The artwork of Chewbacca’s home planet has been reused for every other time the lore has seen fit to revisit the planet such as in Revenge of the Sith, The Force Unleashed, and Jedi Fallen Order. The first episode of The Mandalorian has two major references to the special, including a character who namedrops Life Day. The lead character Mando even uses Boba Fett’s staff from the special as his primary weapon. 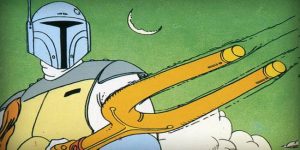 I wasn’t going into this expecting to dislike it unlike some of my peers, and I don’t dislike it now. I’ve had most of these sketches committed to memory for years prior to finally sitting down to watch the entire movie. Thanks to it briefly blowing up in popularity around 2014-2015 becuase of YouTube channels like RedLetterMedia, JonTron, and I Hate Everything, I knew exactly what I was getting into. With that foreknowledge and the added help of watching the snide Rifftrax commentary, the film was actively enjoyable in a perverse way. It’s not as funny as The Room or Birdemic, but there’s an appeal to hate-watching this for the experience. That said, I completely sympathize with anyone who gives up on this halfway through. I haven’t met many people that have seen this that don’t deeply regret the experience.

The Star Wars Holiday Special is a testimony to avarice. It's largely considered unwatchably boring by most, or an ironic time capsule of late 1970's drug-addled decision making. It's only worth seeking out online if you're a huge Star Wars fan or if you love hate-watching terrible movies.