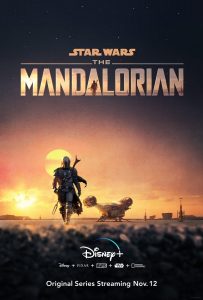 Disney+’s first original series just went live with the launch this week of their streaming service. The Mandalorian takes its viewers to the far edges of the galaxy in the aftermath of the Galactic Civil War and the defeat of the Empire. A lone bounty hunter struggling to get by is hired by a mysterious client to hunt down a being lost for fifty years in the outer rim.

Language/Crude Humor: No contemporary harsh language, some Star Wars lingo that could be interpreted as swearing

Drug/Alcohol Use: Characters drink at a bar 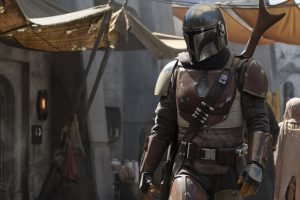 Disney+ has finally arrived, and boy is it glitchy! Stability issues aside, I’ve been looking forward to the arrival of this new streaming service for several months. While I’m not the biggest fan of Disney animated movies (I enjoy them, but they’re just not my favorite genre), I can say some of the promises for original content for the streaming service have stoked my interest. The service is launching with the entire series of The Simpsons, many of the best MCU movies, the entire Star Wars franchise, and dozens of animated movies and TV shows. Additionally, we’re set to receive several exclusive Star Wars and Marvel TV shows on the app over the next several years including Falcon and the Winter Soldier, Wandavision, and the seventh season of Star Wars: The Clone Wars among others. There’s also an exclusive live-action Lady and the Tramp movie, if that peaks your interest (?!?). This is actually kind of a brilliant service to have for kids since most everything on it is family oriented from the get go.

My most anticipated exclusives on the service have of course been its live -action Star Wars lineup. The service launched with the first episode of their highly anticipated series The Mandalorian and is going to have series based on Cassian Andor (Rogue One) and Obi-Wan Kenobi eventually. Whatever can be said about Disney’s tract of recent Star Wars movies, their television division may very well be the place where they find their most solid footing with the franchise.

The Mandalorian has had a lot of hype build up into it over the past two years since its announcement. The series has solid footing as far as talent goes. Jon Favreau (Iron Man, The Jungle Book) in the driving seat as the showrunner was a solid choice and bringing in The Clone Wars showrunner Dave Filoni was a great choice to fill out the writers’ room given his adoration amongst Star Wars fans. As the footage started slow, dripping in over the past year, it only served to boost the hype as it showed a deft attention to detail and tone in its attempts to match the aesthetics and feel of the original trilogy. Moreso than even Force Awakens and Rogue One, which both painstakingly tried to backwards engineer the feeling, this actually felt like we were walking around in the seedy, slimy underbelly of Star Wars.

I still had my concerns, though. For one, the advertising and promotional footage did nothing to convince me the lead character wasn’t going to be a total blank slate. I was afraid this was going to turn into an entire series of fan service, empty action-schlock, and deep-lore callbacks to get the hardcore Extended Universe/Legacy fans frothing.

Though it shouldn’t be too surprising, the first episode of The Mandalorian is solid. If you’ve already seen the footage and trailers, then nothing here is going to shock you. It would appear most of the promotional footage for the show came from this episode, so everything from the main characters to the major action set pieces were already revealed to us. What we didn’t see in that footage of course is the connective tissue. There’s a lot of downtime in the episode that just lets the character walk around some of the planets it introduces and lets us breath in the world. We get just enough to really imbibe this world and enjoy it without it feeling gratuitous. 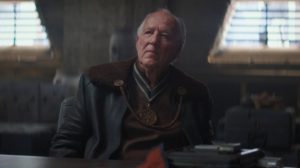 The titular Mandalorian, a thus far unnamed bounty hunter hailing from the same race of space knights as Boba Fett, does a lot more for me than I thought he would. While we only understand sparse details about his life, honor code, and line of work, the tidbits we do have are enough for a minimalist character study. The series isn’t playing him up as someone important; he’s a regular working class guild member who has bills to pay. He takes up a secret mission in the show just because his clients are cheapskates who won’t pay enough for targets. We also get a sense of his morality. He isn’t just running around murdering people on a whim. We even see him enact small acts of kindness and honor to those who help him. He’s built up in the marketing material as a “Clint Eastwood”-style morally grey gunslighter and you really see that. He’s mysterious while still having an engrossing character.

While I was doing research for this review, I learned the main character’s weapon is based on Boba Fett’s weapon from The Star Wars Holiday Special. I’m not sure if that counts as fan-service, but I approve!

It’s hard to tell exactly where the series is going. There’s a reveal at the end of the first episode that suggests the series could go in a more fan-servicy direction that ties more into the metanarrative of the other Star Wars movies. Honestly, I hope that doesn’t happen. This series should stay in its own little bubble and let the details and worldbuilding do the talking. There’s no indication something insane could happen like an appearance from Sebastian Stan as Luke Skywalker or something crazy like that. We would’ve heard about casting rumors by now if they wanted some legacy characters to make an appearance. It helps that this is entirely set in the Outer Rim, thus divorcing it from the political machanations of the New Republic and the Empire for the most part so we can just focus on this one individual story. There is still alot we don’t know about the arc of the series overall, and we won’t know for sure until the series completes its eight-episode run on December 27th. For a pilot episode, this is a solid start. If you’re frustrated with recent Star Wars movies, give this a chance! 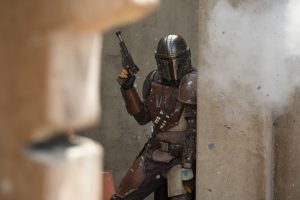 Unless you have a moral reason not to support subscribing to Disney+, I would highly recommend checking this out when you have the chance. The Mandalorian is one of the best things to come out of Lucasfilm in years and will likely become a jumping-off point for multiple Star Wars TV shows.