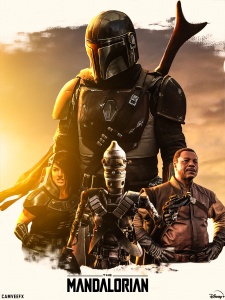 With the finale of The Mandalorian in the past week, the Star Wars fandom was given the opportunity to get some closure and reflect on the success of the most popular new story to come out of the Disney regime. The series was an instant hit upon release to Disney+ in November, and it’s since earned its status with a consistent slate of weekly episodes concluding on December 27th.

Violence/Scary Images: Characters are shot with laser blasts and die bloodlessly; a character is cut in half offscreen; a character is bitten and attacked by large animals, villages are raided, characters are injured by explosions, a character is crushed by a door offscreen, blood is briefly shown
Language/Crude Humor: Mild language, some Star Wars lingo that could be interpreted as swearing
Sexual Content: None
Drug/Alcohol Use: Characters drink at a bar
Spiritual Content: Characters reference The Force as a religion practiced by a race of extinct sorcerers
Other Negative Themes: Large body counts, killing, murder, and criminal behavior
Positive Content: Themes of honor, chivalry, and loyalty 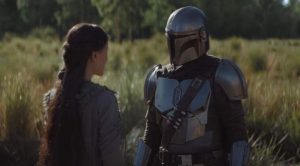 The first season of The Mandalorian has felt like an absolute godsend for the Star Wars fandom. I can’t tell you how nice it is to have the entire fanbase on board with not one but two concurrent releases in the franchise. This and the simultaneously released video game, Jedi: Fallen Order, has energized the fandom with a set of well-done action focused stories that build upon some of the best elements of the franchise while still doing their own thing.

The first season of the show has now come and gone, and it’s proven itself as one of the most engaging and fun entries in a franchise that’s struggled to overcome its own identity crisis for years. The weird part of it for me is just how familiar it feels. Going into the show’s first episode last month, it carried with it the tone and confidence of Jon Favreau’s touch. As it’s moved along, though, the true author of the series has really made his fingerprints felt for good and ill. Dave Filoni is, of course, one of the most beloved creatives working at Lucasfilms. He’s spent more than a decade cutting his teeth on beloved animated TV shows like The Clone Wars and Rebels as the supervising director. His voice is a constant behind all three of these television shows. That’s a good and bad thing.

Filoni is exceptionally good at GETTING Star Wars and the version of it he’s invented is exceptionally popular to most of the fanbase, but it’s also somewhat frustrating. He’s very good at finding unique ways to fill out the details of the universe. I can’t imagine anyone else dedicating an entire episode of ANYTHING to the Jawas and managing to make it come across as compelling and fascinating. He managed to do that with The Mandalorian’s second episode. On the reverse side, this tends to mean his work is full of wheel spinning. Episodes 2 and 4-6 of the season are a lot of fun and introduce new characters that prove vital in the finale, but on their own are filler. 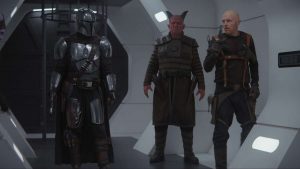 The Mandalorian is at its best when there’s a constant flow of story and consequence to the narrative as we see in episodes 1, 3, 7, and 8. That doesn’t mean a digression where Mando gets his ship fixed on Tatooine or fighting orcs on an alien planet isn’t welcome, but I would’ve liked more propulsive consequences in the larger narrative for these events. It’s lovely getting to slow down and let these characters breathe and talk. We may not get to see our main character willingly remove his helmet, but getting to watch him interact with this cast of interstellar misfits is great. Thankfully, all of these characters end up becoming vital by the end of the first season. That said, when Filoni is at his best the show is nail-biting. There were a couple of weeks where I was absolutely dying for next week’s episode to premiere already just because of how gripping the drama was. I haven’t felt that way about a television show in a while.

The story picks up from the first episode and sets up its status quo going forward by the end of Episode 3. Our lead character discovers an infant of the same species of Yoda is the target being sought by the Imperial remnant who hired him. Identifying with the orphaned child, he proceeds to take him back to the client after a brief detour to repair his ship. He’s paid handsomely for the deal, but quickly regrets handing such a vulnerable force-sensitive child over to the Empire. As we find out in flashbacks, our lead character was an orphan too. That reality has defined much of his identity as a warrior. “Mando” makes the affirmative decision to abandon his mission for the Imperial Client and steal the infant child for its protection. In the process, he unfortunately alerts every bounty hunter in the sector and sets the Empire on his tail. 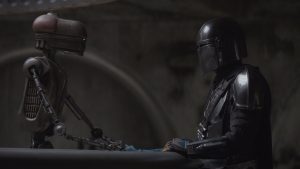 The next several episodes are where the series slows down. For the duration of the next three episodes, Mando finds himself on random planets and smuggling stations trying to find work to keep himself above water. At the same time, other bounty hunters start figuring out who he is and where the child is located. He’s forced to stay on the run and constantly keep moving from planet to planet for the child’s safety. Though less effective and story-driven, these episodes do warrant their existence by centering their plots on the season’s core foundational relationship.

It helps this show that its central relationship between the child and Mando ends up being so effective. Whatever you can say about a lead character who never takes his helmet off and the deeply cynical prospect of seeing an infant of Yoda’s species, their relationship works. Mando clearly relates to the horror of being lost and abandoned at a young age given his own history as a “foundling” having been adopted into the Mandalorian Covert. That trauma serves to infuse his entire character motivation for the season. He starts the show as a mercenary and hard-bitten man and that image gives way almost immediately when faced with the prospect of handing over a creature he identifies with to an uncertain fate. 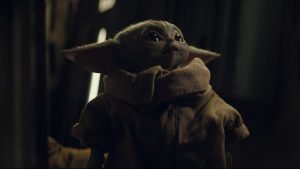 The puppet for the child, which has colloquially gained the name “Baby Yoda,” is a marvel of modern production design. Though his emotional reactions are often limited to adoration and curiosity, that’s more than enough to make watching him interact with his environment completely adorable. We ultimately don’t get to find out much about who it is or where it came from, but that’s by design. Yoda’s species in the extended universe of Star Wars were also vaguely defined. This is the fourth time we’ve seen one in the entirety of the extended lore. We don’t know their homeworld, how large their species is, or why they’re so connected to the force. That vagueness makes seeing Baby Yoda all the more magical. 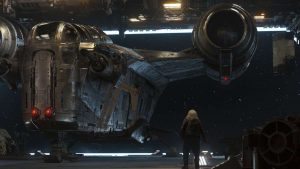 The final episodes ultimately feel both conclusive and mildly open-ended. The main threat of the season is resolved, but the questions it asked throughout the season are left wide open for a Season 2 which is currently in production. It’ll be the better part of a year until Fall 2020 when many of the questions are answered further. Thankfully the season does end on a note which offers clues as to the ongoing story. The final shot of the season contains a massive Easter egg that references Dave Filoni’s previous work on Clone Wars and Rebels, and gives some insight as to what the conflict going forward will look like.

The Mandalorian Season 1 has earned a reputation as an immaculately constructed and produced action series up through its finale. That’s not surprising, of course, given Disney is well prepared to throw everything and the kitchen sink at a production like Avengers, Star Wars, or The Lion King on the technical side if there’s a promise of a solid $1 billion gross waiting on the other side of it. It’s clear this series’ success was paramount to the success of Disney+ as a streaming platform. Regardless of your overall opinion of the Sequel Trilogy, The Mandalorian seems to have become the one thing almost everybody loves about Post-Lucas Star Wars. The promise of more adventures in the Outer Rim with Mando and Baby Yoda is exciting!

The Mandalorian is easily some of the strongest Star Wars material we've gotten since the Original Trilogy. It's been embraced so widely by the fandom because of its compelling characters and settings that draw upon the history of the franchise while interpreting it in a new way.