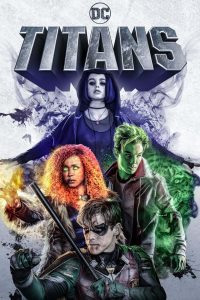 Titans is an American television series created by Akiva Goldsman, Geoff Johns, and Greg Berlanti. As one of the first original series to debut on the new streaming service, DC Universe looks to make this gritty adaptation of DC’ s Titans the flagship series of their service. The series is based on the Teen Titans comic book series published my DC Comics, which features a team of young superheroes including Robin, Raven, Starfire, and Beast Boy. A live-action series based on the Teen Titans has been in development since the Fall of 2014. With the success and cult following of both animated series Teen Titans and Teen Titans Go, a pilot was ordered by TNT, but never produced. In the Spring of  2017, DC Entertainment announced the series would be released on the new DC Comics streaming service in order to compete with the multitude of other streaming services including Netflix, Hulu, Amazon Prime, and the forthcoming Disney streaming service, Disney+. Titans premiered its pilot episode on October 12, 2018. Its eleven episode season received mixed reviews, earning an 84% on Rotten Tomatoes and a 55 on Metacritic. Titans was renewed for a second season. A spinoff series entitled Doom Patrol has also started development.

The series producers drew inspiration from the Teen Titans comics of the 1980’s, where the drama of interpersonal relationships was the focus of the story. Goldsman, Johns, and Berlanti wanted a fresh and revolutionary take on these otherwise wholesome characters. A mix of action, drama, and horror are the focus of this new incarnation of the Titans. Every character is written to lean toward an individual genre. By utilizing Raven to introduce a supernatural horror element to the show and Robin to present a gritty, real-world action element, the showrunners achieve a broad spectrum of tone throughout the series. The majority of the first season focuses on who Raven is and how the Titans will come together to protect her. The producers’ intention is to have the show be “more adult,” similar to the heaviness of the Netflix Marvels shows like Daredevil and The Punisher. “We wanted to do something different from everything else out there. We wanted to arrive at a tone that wasn’t as welcoming as some of the DC shows have been, nor as nihilistic as some of the films have been,” said Goldsman.

Spiritual Content: Raven is often possessed by a demon-like entity, which causes her to murder or cause harm to others.
Violence: The series is littered with hyper-violence. From bone-crushing hand-to-hand combat fight scenes to brutal gunfights, Titans proudly exhibits its ultra-violent world with every gory blood splatter.
Language/Crude Humor: The series prides itself as being adult. Therefore, there is extensive use of F**k, B***h, A*s, and other foul language throughout the entire season.
Sexual Content: Some sex scenes occur in the season, however, nudity is not present.
Drug/ Alcohol Use: Some scenes where beer and liquor are consumed can be seen, but they are few and far between.
Other Negative Themes: There is a blatant lack of authority as exhibited by a character murdering a host of innocent police officers.
Positive Themes: The Titans form a family-like bond as they rally around Raven to protect her from evil.

Titans follows Dick Grayson, aka Robin (Pirates of the Caribbean: Dead Men Tell No Tales and The Giver’s Brenton Thwaites), as he attempts to escape from the shadow of Batman. Now a police Detective, Grayson leaves Gotham and finds himself in Detroit in the middle of a missing persons case of one Rachel Roth, aka Raven (The Osiris Child’s Teagan Croft). Rachel is on the run from an evil group who look to use her supernatural power to bring about the end of the world. Also in pursuit of Raven is Koriand’r, aka Starfire (24:Legacy’s Anna Diop), who also has supernatural abilities and is suffering from amnesia. As Raven continues to avoid apprehension, she comes across Gar Logan, aka Beast Boy (Big Hero 6’s Ryan Potter), and is introduced to the Doom Patrol, a group of colorful characters with their own unique abilities. Grayson, along with the other superpowered individuals, comes together to protect Raven from the sinister organization who looks to use her and her ever-increasing power. 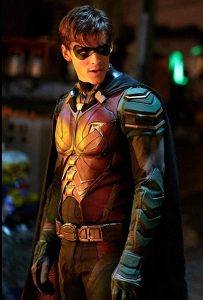 Titans is DC Entertainment’s step towards appealing to a more mature audience. The series continues DC’s exploration of the darker side of their comic book characters. Visually, Titans is appealing. With muted colors, dark environments, and passable visual effects, Titans keeps its feet on the ground and achieves a level of realism which can be difficult in modern superhero productions. As a series focused on superheroes whose source material is kids in spandex, Titans delivers on its costume design. Robin’s suit has a more tactical, practical, and lived-in look to it. The other main characters’ costumes fit with their origins well and feel appropriate. A standout of its production is its sound design. Titans’ score and music choices are reminiscent of Nolan’s Dark Knight Trilogy. Using a sweeping and heavy orchestral theme, Titans feels right at home among other live-action DC properties. Titans definitely has a more grounded and gritty tone far removed from the source material and the animation series. 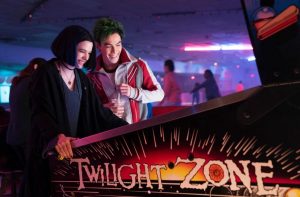 Where Titans succeeds in production and sound design, it fails at in storytelling and writing. While the story itself is fairly simple (protect the girl from the bad guys), there were too many times I felt absolutely lost. The sequence of episodes are oddly placed and the pacing is miserable. Once the pilot is over, it feels like an eternity until the team in which the series is named after finally come together. Although things are fun and entertaining when the Titans finally come together in battle, the series grinds to a screeching halt and the subsequent episodes are a chore to get through. There are flashes of brilliance in each episode; however, not enough to consider it great. Often times, interesting characters are introduced and feel as if they are important to the over-arcing story to then be practically dropped from the rest of the series and brought back at what feels to be an inappropriate time. 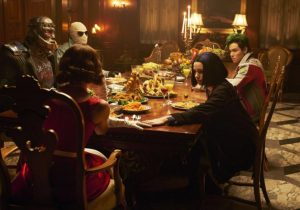 Often, characters would experience something which could lead to wonderful development or relationship building among characters only to fall flat with a thud due to poor dialogue and missed opportunities. DC’s step toward more adult content leads them to explore more adult dialogue. Though this can open up new avenues of verbal exploration, it can also lead to the use of unnecessary expletives just for the sake of expletives. Unfortunately, Titans leans toward the latter. There is nothing wrong with a few well-placed curse words if written well. However, when used to just make the dialog seem more mature, it seems too forced. Often times these lines of dialogue feel misplaced and cringeworthy. 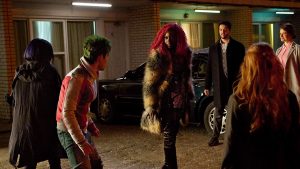 Although the majority of the cast is serviceable in their roles, the series centers around Teagan Croft (Raven), whose performance is wooden and emotionless. As a teenage girl in crisis with her identity and a lack of a true family and home, Raven sounds like she would be a standout in the series. However, the weight of the series might have been too much for the young actress. Maybe her performance can be attributed to poor writing or directing. For whatever reason, Croft’s execution is not believable and unconvincing. Although I desire to empathize with the character, Croft’s performance doesn’t help me feel for her. Notwithstanding of Croft’s performance, Brenton Thwaites (Robin) and Ryan Potter’s Beast Boy are series standouts. Thwaites’ iteration of the Boy Wonder is gritty and appealing. Although Thwaites has his fair share of cringy dialogue, he comes off as believable and authentic. The same can be said for Potter’s Beast Boy. As the series’ comic relief of sorts, Potter comes across as lovable, charming, and a series favorite. 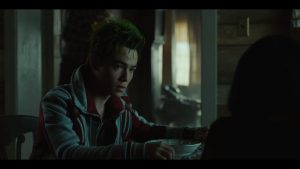 DC Universe’s Titans is definitely not the Titans most fans are familiar with. This gritty, ultra-violent adaptation can turn away loyal Titan fans or bring in new fans looking for a new hyper-violent superhero series to replace the loss of the Marvel Netflix shows. Titans is a work in progress experiment which has the potential to be something special. Titans season one as a whole feels disjointed, disorganized, confusing, and incomplete with its season finale, which is a perfect example of its disjuncture and an unsatisfying conclusion. As it stands, Titans has a lot going for it; however, it also has its fair share of problems. While a more mature interpretation of these characters can be refreshing, organic it is not. Although the story structure is a mess and the pacing chaotic and exhausting, there’s enough positivity to drive one to complete the season or maybe just morbid curiosity. If Goldsman, Berlanti, and Johns shift their focus to performance, writing, dialogue, editing, and pacing, they could have a real gem on their hands that would be a great contribution to the new streaming service. 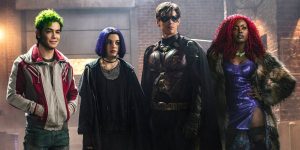 If you are looking for the next gritty, real-world superhero show in the same vein as Marvel's Daredevil and The Punisher, then DC Universe's Titans may be for you. If you are expecting the same great writing, storytelling, and character building as the afore mentioned titles, then leave your expectations at the door.