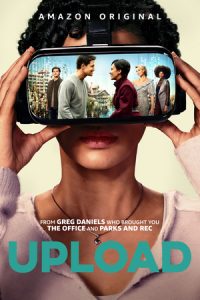 Upload is an American television comedy/sci-fi series created by Greg Daniels and produced by Amazon Prime Video. In the summer of 2018, Amazon Prime Video announced the production of a comedy series executive produced by Daniels whose credits include King of the Hill, Parks and Recreation, and the American version of The Office. The series was green lit for a ten episode run produced by Howard Klein and his television production studio 3 Art Entertainment alongside Daniels.  Casting for the series began in January. Robbie Amell (The Duff, The Tomorrows People, and The Flash) was cast as series lead with Andy Allo (Chicago Fire and Black Lightning) set to co-star. Upload premiered its full ten episode season on Prime Video on May 1, 2020.

Greg Daniels’ new comedy series was met with positive critical reception. Generally, Amazon’s new comedy series are well liked among critics and audiences. The series achieved an 86% critic rating on Rotten Tomatoes with an 88% audience score. Metacritic scores the series at 66 with an 8.0 user score and IMDb review score of 8.1 out of 10. With such an overall positive response, Amazon announced just seven days after its premiere on May 8, 2020 that the series was renewed for a sophomore season. 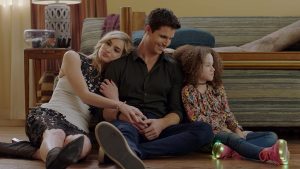 Spiritual Content: Some individuals in the world of Upload choose not to upload their consciousness to digital servers, but choose to allow their spirit to enter the natural afterlife in Heaven. The series is a testament to how humanity has abandoned the concept of God by taking their afterlife into their own hands by way of technology.

Violence: Although there is very little violence in Upload, there are some scenes that depict human decapitation, bodily dismemberment, and stabbings.

Language/Crude Humor:  The use of foul language is present, but rarely abused. A random s**t or an a** is present.

Sexual Content: Multiple characters engage in physical and remote intercourse. Female nudity can be seen in a few scenes throughout the series.

Drug/ Alcohol Use: Some alcohol consumption is present, but not abused.

Other Negative Themes: Although the two main characters Nathan and Nora develop a romantic relationship throughout the series, Nathan is engaged to another woman.

Positive Themes: Socioeconomic equality is a major theme of the series. Examining the inequality of afterlife rights between the wealthy and poor is prevalent as it is argued the afterlife is a human right which shouldn’t be bought. 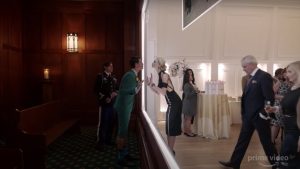 Set in the near future in the year 2033, the enigma of the afterlife has been solved by technology. In the world of Upload, before a person’s physical body dies, their consciousness is “uploaded” to a server where they would spend the rest of eternity existing in a digital virtual world. There are a multitude of companies which provide this digital afterlife, but none can compare to the amenities provided by Horizon. Horizon offers virtual consciousnesses complete with a digital avatar to spend eternity at the prestigious Lake View resort with all-you-can-eat gourmet food and luxurious activities.

The series follows a modest computer programmer named Nathan Brown. Nathan and his business partner are on the brink of developing a revolutionary code in order to provide a digital afterlife to all no matter their socioeconomic position free of charge. While on his way home from a family dinner with his fiancé Ingrid, Nathan’s self-driving car begins to malfunction. Automated vehicles have perfect driving records…until now. The car crashes into the back of a truck with Nathan inside. He is rushed to the hospital due to the injuries suffered from the crash. His fiancé is told his injuries are serious and he may loose his life. He is given the choice to either take his chances in surgery and die on the operating table, or upload his consciousness to Horizon on his affluent fiance’s account. Ingrid convinces an apprehensive Nathan to upload his consciousness to Lake View where he will wait for her until she uploads to the virtual resort to spend eternity together.

Once uploaded, Nathan is introduced to his “Angel,” a real life customer service agent named Nora employed by Horizon. Nora’s job is to guide Nathan through his new digital afterlife and provide for his needs. Soon after, Nathan and Nora begin to develop feelings for each other. Nora and Nathan soon discover evidence his accident may not have been an accident after all. Together, they begin to uncover the mystery of Nathan’s early demise. 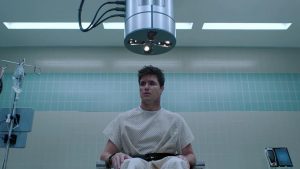 Greg Daniels’ most recent television endeavor was highly anticipated in the TV world. This is to be expected, as Daniels is the creator of arguably two of the best TV comedy series in modern history: the American version of The Office and Parks and Recreation. Luckily, his latest attempt did not disappoint. Upload is not just a comedy, but a mystery, science fiction, and social satire all rolled into one. The series achieves multiple levels of depth in a short period of time, as it is only a 10 episode season consisting of thirty minute episodes. Although the series is fairly short, it still manages to explore a multitude of themes from existentialism, to economic inequalities and dating in a digital world.

One of the major themes of the series is a commentary on how dependent humans have become on technology and how the advancement of technology creates a pathway for the abuse of capitalism. This is seen as Michael explores the resort and is prohibited from certain amenities due to micro-transactions and is bombarded with pop-up banner ads. By mixing in social commentary as depicted by two individuals having to record consent to intercourse videos and a compelling murder mystery, Upload keeps things fresh. 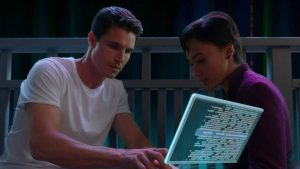 Robbie Amell’s performance as the series lead Nathan is a stand out. While at first the character comes off as unlikable and a bit of a jerk, you quickly change your assumption of the character to find him lovable and genuine. This change in affection of the character can be contributed to the amazing chemistry and developing romance with Andy Allo’s Nora. Their bond is unique in the fact that she is a living woman and Nathan is a digital consciousness. In spite of their corporeal differences, their relationship is genuine and easy to root for. We want these two characters to be together somehow, even though there are massive challenges keeping them apart. Amell’s and Allo’s chemistry is a series highlight. One unfortunate misstep the series makes is introducing a great character and abandoning her development mid-season. In spite of this mishap, the series character development is superb. 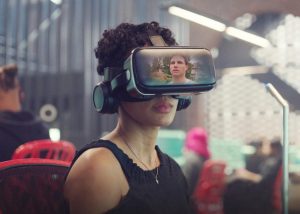 Amazon Prime Video has another hit on their hands. Prime Video has recently developed a number of superb series in order to plant their flag in the digital streaming space. Upload is no exception to the stand out productions Amazon has invested in. Upload is a fun, wacky, and oddly familiar story. By exploring capitalism in a digital age, it manages to tell a hilarious yet cautionary tale. Although Upload is a comedy at heart, its thought provoking themes of spirituality and existentialism is the true story of the series. The series shows people taking their afterlife experiences into their own hands by way of technology, thereby sacrificing a true afterlife. Although over the top at times, Upload feels grounded in technological possibilities. Technical achievements such as food printing and self-driving vehicles seem as if they are just around the corner. The world of Upload is filled with characters you’ll come to love and care about, and I can’t wait to revisit them as soon as possible.

By mixing in social commentary and technological satire with romance and a compelling murder mystery, Upload keeps things fresh.