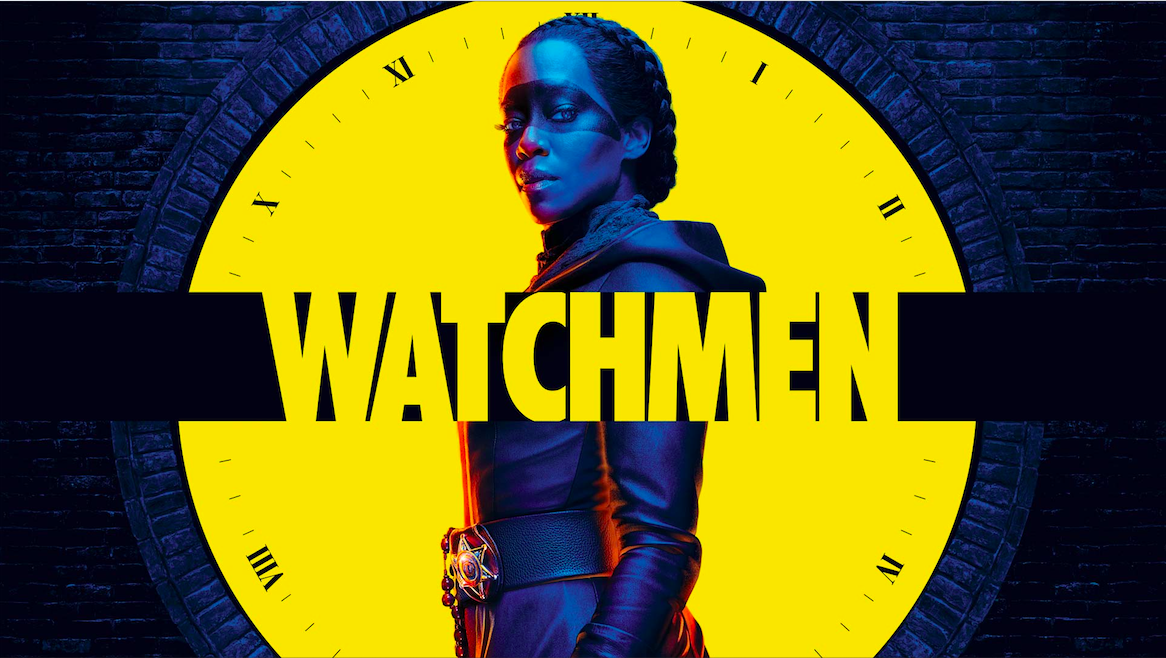 Watchmen is an American television series created and executive produced by Damon Lindelof which continues the story from the classic graphic novel “The Watchmen” published by DC Comics in 1987 and created by Alan Moore and Dave Gibbons. Lindelof serves as the show-runner and head writer for the anticipated series distributed by HBO. In November of 2015, HBO announced the development of a new series based on the groundbreaking comic. Early in its production, Zack Snyder was attached to executive produce the series for HBO. Snyder directed the divisive motion picture based on the same graphic novel of the same name which was released in 2009. Shortly after the critical and financial failure of Snyder’s Batman vs. Superman and Justice League, HBO ended their involvement with the 2009’s Watchmen director and began negotiations with Lindelof. Lindelof has had a successful relationship with HBO as executive producer for the network’s “The Leftovers” series. Lindelof has also found success as one half of the executive production team of the cult classic medium changing series, ABC television’s “LOST”. In June 2017, HBO solidified its contract with Lindelof and greenlit a nine episode season. On September 3, 2019, HBO announced its series premiere date for October 20, 2019.

HBO’s Watchmen premiered on October 20th, 2019 to overall positive reviews. By the end of its season run, the series achieved remarkable critical praise. Watchmen achieved a critic rating of 96% on Rotten Tomatoes, yet a polarizing audience score of 53%. Metacritic scores the series with an average score of 85 and a user score of 5.0. IGN awards the series with 8.5. In spite of such critical praises from well-established critics and sources, audiences seem to be divisive in its reception. Although the series is a success for the popular network, HBO has yet to announce or even hint at a season two. Lindelof has stated in regards to returning as executive producer for a second season that it would be unlikely. Although Lindelof and HBO agree the story of the Watchmen would benefit as an ongoing series, Lindelof is more interested in stories with a beginning, middle, and end as opposed to an ongoing story with no end in sight. HBO has released a three episode podcast entitled The Official Watchmen Podcast hosted by Craig Mazin. In each episode, Mazin sits with Lindelof and discusses creative choices, challenges, production, and the show’s connection to the original source material, and aims to be a companion to the series. 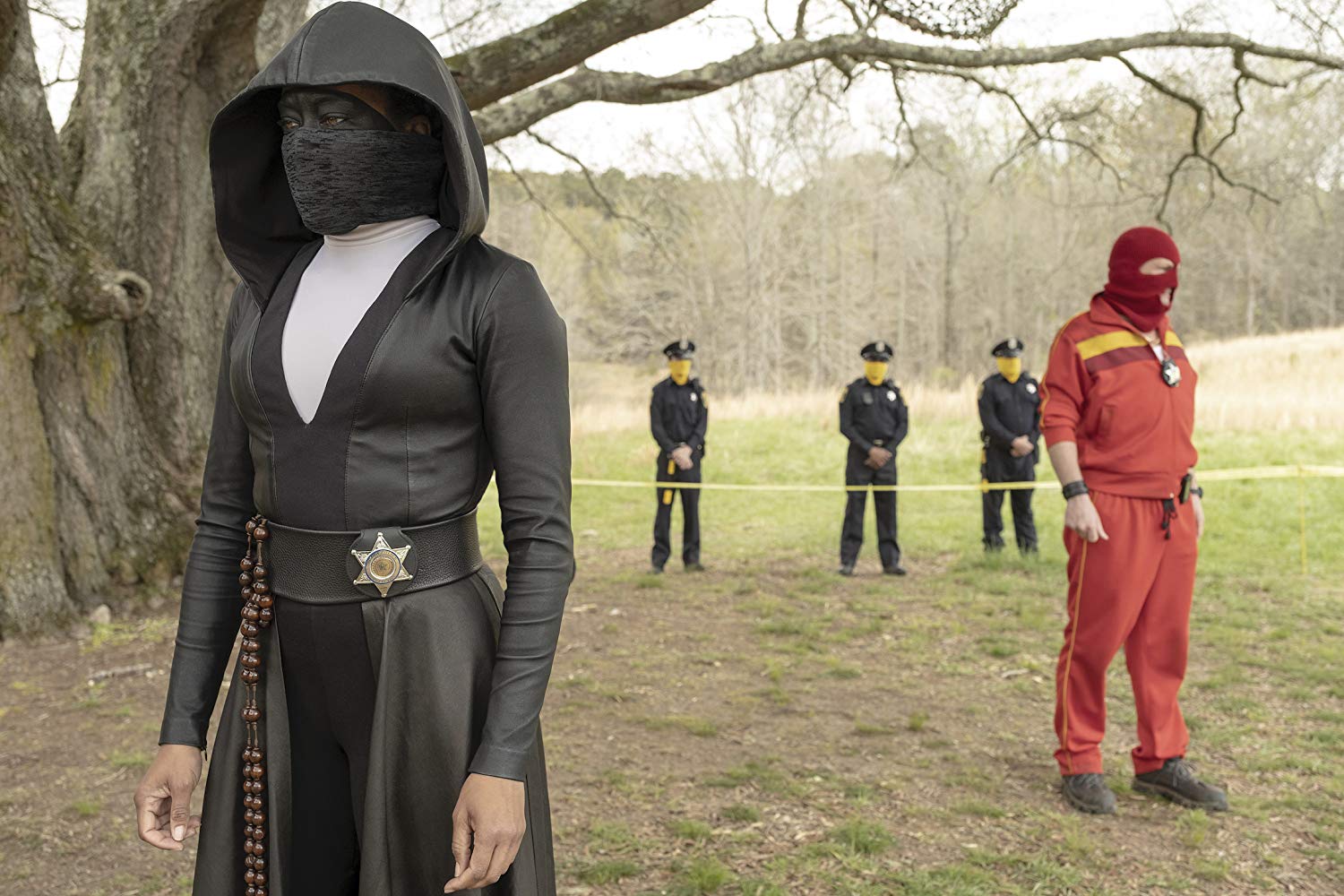 Spiritual Content: Dr. Manhattan is identified as a living god who is praised and hated for his abilities.

Violence: Watchmen is extremely violent. There are many scenes depicting gun violence and hand-to-hand combat. Disturbing scenes of hanging and executions can be seen. Blood, dismemberment, and murder are witnessed.

Language/Crude Humor: The use of foul language is featured excessively throughout the entirety of the season. Language such as F**K, B***h, A**, Bas***d, D**k, and many others can be heard. A sexual device for self pleasure can be seen.

Drug/ Alcohol Use: Some alcohol use can be seen throughout the entirety of the series, but not in excessive use.

Other Negative Themes: Racism is a prominent theme throughout the entirety of the series. Images of a white supremacist in KKK wardrobes and other racially sensitive material can be seen.

Positive Themes: Themes of family are present within the series. Nurturing relationships between loved ones related and/or adopted. Personal identity is an ongoing theme throughout the series. Being true to one’s self is addressed and encouraged. 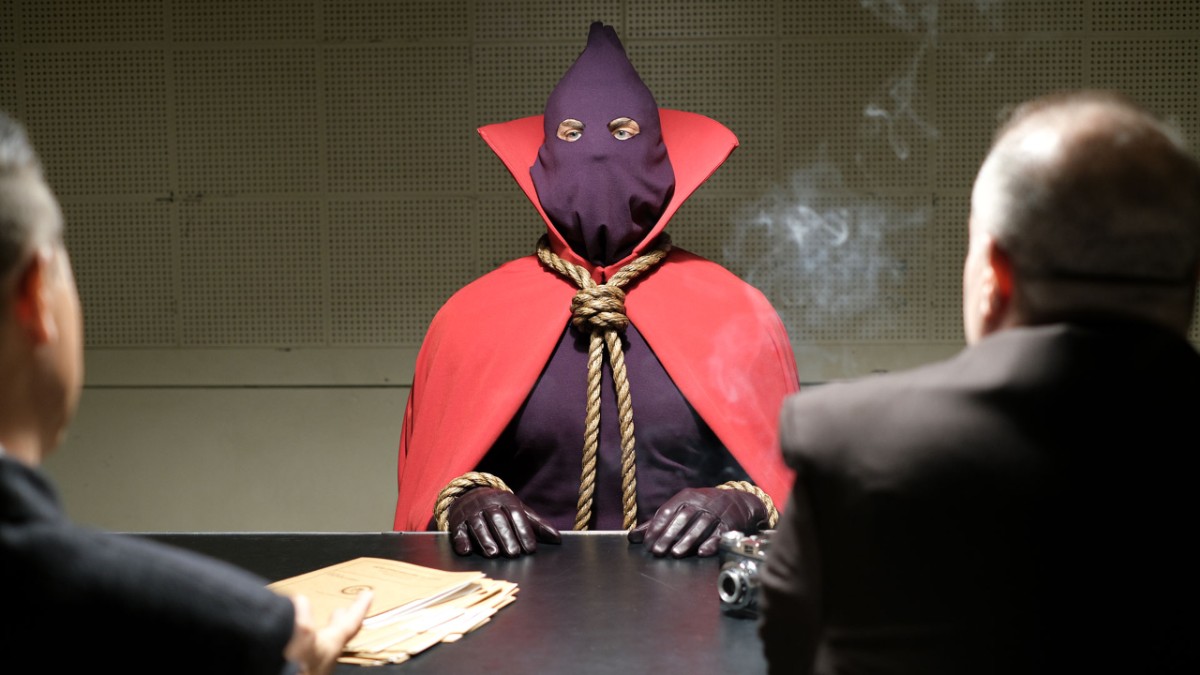 HBO’s Watchmen takes place 30 years after the events of the original graphic novel. The series centers around Tulsa, Oklahoma and its racially segregated past. A masked white supremacist group calling themselves The Seventh Kalvary rises up and declares war on African Americans and law enforcement who are also masked to hide their identity. Officers are required to wear masks for protection due to an incident in 2016 where 40 police officers of the Tulsa police department were attacked in their homes by members of The Seventh Kalvary on Christmas Eve. The event is called “The White Night”.

Meanwhile, a man whose identity is a mystery (played by the legendary Jeremy Irons) seems to be trapped in a picturesque countryside complete with a castle estate. Tension builds as the Seventh Kalvary and the police inch closer and closer to an all-out race war. With flashbacks peppered throughout the series of major events in the town, an exploration of Tulsa’s deep-rooted racist history is uncovered. 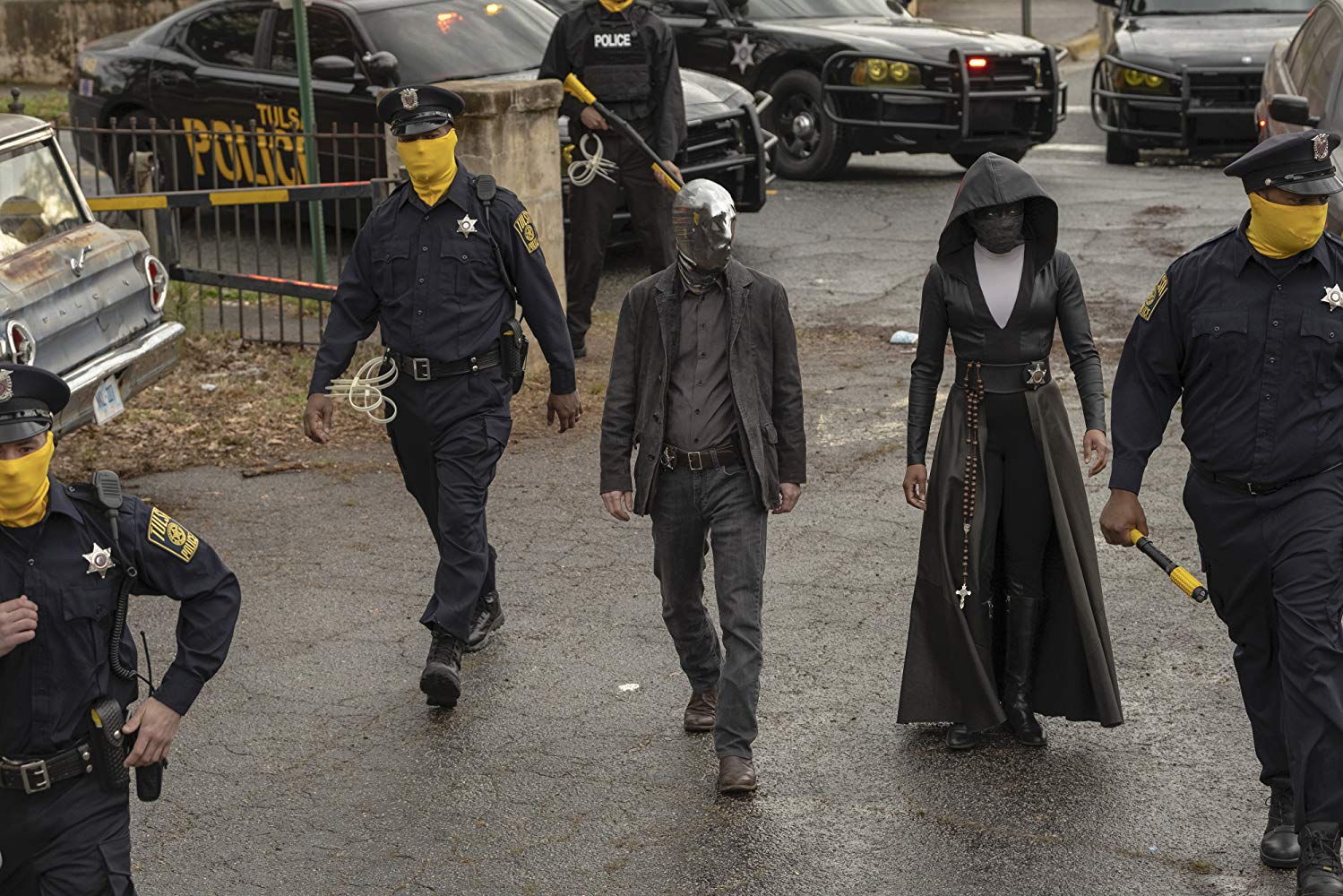 Damon Lindelof has gone on the record stating he had been interested in adapting Watchmen in some form since he read the comic as a teenager. He stated the original source material has been a large influence in his career and it shows in his HBO series. Lindelof’s Watchmen series is a love letter to the original graphic novel and pays homage to its groundbreaking story. Lindelof packs in deep, profound, and dense stories of race, identity, legacy, and hate into a tightly wound nine episode arc. It is apparent Lindelof took extreme care in the continued story of the Watchmen and where some familiar characters are as well as the status of society 30 years later after the events of the comic.

Lindelof is known for not explaining or expanding on mysteries in many of his outings as a writer; however, practically every mystery or set up is answered and paid off. Watchmen perfectly balances a call back to the original story, but Lindelof succeeds in making this Watchmen story his own. Lindelof, much like Alan Moore, creates a world not so very different from our own while utilizing events from our own history to paint a beautiful yet horrific landscape. Lindelof opens the eyes of the viewer to actual historical events that have been long buried by time. Events such as “Black Wall Street” are not known throughout our social consciousness. Utilizing the backdrop of America’s segregated history, Lindelof holds up a mirror to our current society and dares us to look at our reflection. 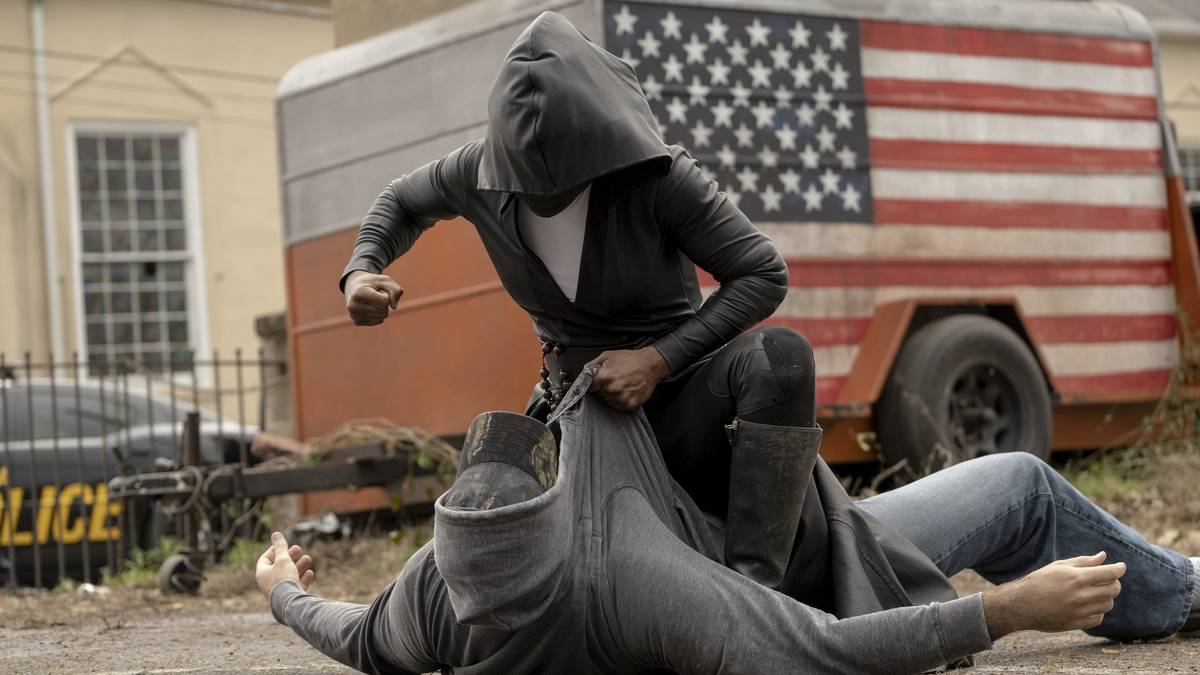 This season of Watchmen has some of the best episodes of television in the year of 2019. The first half of the season perfectly sets up the world we are about to inhabit. From the middle of the season to its finale, it is a fast-paced rollercoaster ride reveling mystery upon mystery until it crashes into its payoffs toward its finally. The Watchmen story progression is one of the finest on television today. Its character development is purposeful, intricate, fascinating, and enjoyable to watch. Although the series heavily relies on the past events of the graphic novel, where the series goes is a mystery and unpredictable. The series succeeds in keeping the viewer at the edge of their seats. What keeps the viewers’ attention is the perfect combination of its writing with its performances. Regina King coming off her Oscar win in 2019 delivers a heartfelt, emotionally raw performance as Sister night. She balances a sense of duty and conflict in this career-defining role. King’s is not the only stand out performance in series. The entire cast from Yahya Abdul-Mateen II, Tom Mison, Sara Vickers, Jeremy Irons, Andrew Howard, Louis Gossett Jr., Jean Smart, Time Blake Nelson, James Wolk, Hong Chau, Don Johnson all pull their weight in bringing life to Damon’s dense yet fulfilling story. HBO’s Watchmen is a visual and auditory feast for the senses. The direction of the series is masterful. The art direction and cinematography is a visual spectacle. The production of the sets are beautiful and jump out of the screen. The series is a technical marvel. The musical score of the series is a perfect marriage between the visual medium and its melancholy music. HBO has become the leader in production values in its series’s and Watchman is standout. Although it may not have the sprawling vistas of Game of Thrones, Watchmen successfully achieves a sense of the printed pages of the comic coming to life. 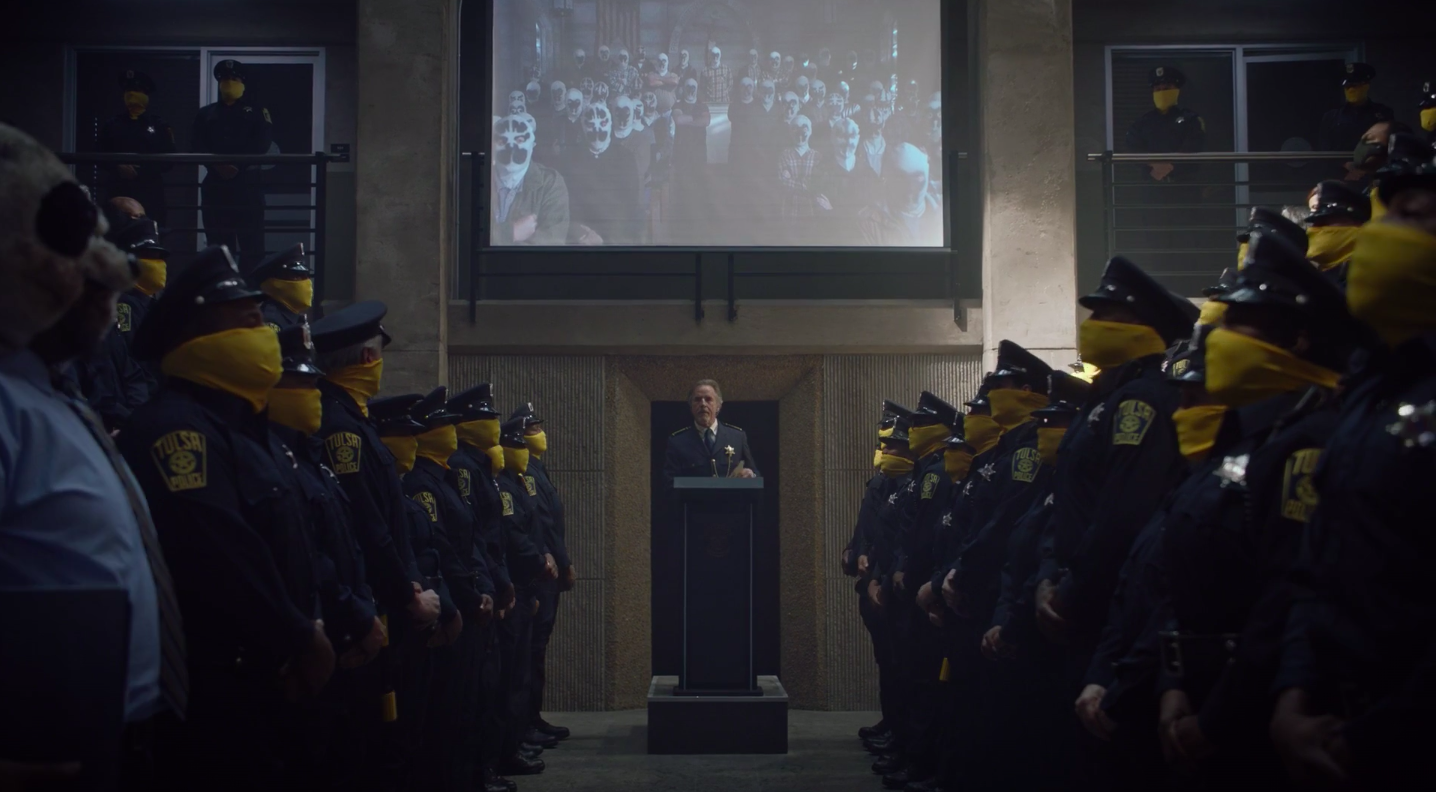 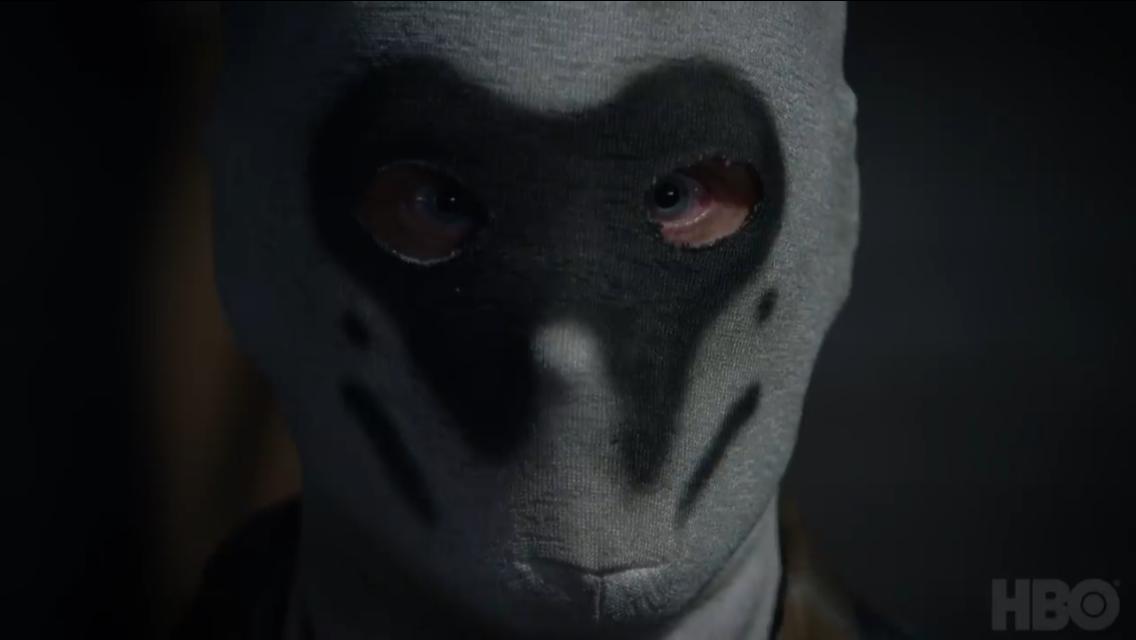 Watchmen is one of the most beloved properties in the last 30 years ever since Alan Moore penned its story to comic pages. Many have said along the years the story of the Watchmen or any live-action adaptation would be close to impossible. Snyder’s 2009 Film proved it can be done, and Lindelof’s 2019 series proved it could be perfected. HBO’s Watchmen is by far one of the best series as a whole to come out of 2019. The performances from the entire cast are remarkable. The whole ensemble cast committed to their respective roles to perfection. The show is a perfect follow up to Moore’s graphic novel. Lindelof perfectly creates an equilibrium of mystery with resolutions. Though inevitable questions arise throughout the series, payoffs are plentiful and worth the journey. HBO and Lindelof provide a stunning achievement in comic book adaptations and gifted fans and nonfans alike with a world worthy to return to for multiple rewatches and binge marathons. Many great shows stumble across the finish line; however, Watchmen not only sticks the landing, but blows the finish line to smithereens in bright blue glory. The series achieves extreme emotional highs and very low lows. Lindelof’s writing career feels like it has all been leading up to this point. Watchmen is definitely Lindelof’s highest career achievement.

Zach Snyder's 2009 film Watchmen proved a live-action Watchmen adaptation can be done, and Lindelof's 2019 Watchmen series proves it could be perfected.