Back when I was a little kid (the early 2000’s), there were two big shows that came on at our house. One was Teenage Mutant Ninja Turtles, and the other was Sonic X. 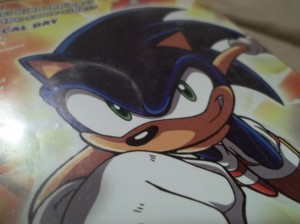 Sonic X is the fourth Sonic the Hedgehog TV Series and the only Anime series Sonic has starred in (though he was in an Anime movie).  Throughout the series many episodes were created as adaptions to previously released Sonic the Hedgehog games such as Sonic Battle, and Sonic Adventure 2. The Sonic X story arc, “Revenge of the Robot,” is an adaption of the Dreamcast hit Sonic Adventure. The title is a reference to E-102 Gamma, one of the playable characters in the game.

This story follows Sonic and friends in their quest to stop Dr. Eggman and his new creature, Chaos, while Knuckles looks for shattered pieces of the Master Emerald, often seeing visions of a girl named Tikal who attempts to protect the Chaos Emeralds form her father’s clan. Sonic, Big the Cat, Chris, Tails, Knuckles, and Professor Thorndyke are all having a discussion on how to stop Dr. Eggman and Chaos. Knuckles reveals that he saw Chaos on Angel Island when the Master Emerald was destroyed by the creature. Big can tell that his pet frog, “Froggy,” swallowed something that looked like Chaos, took the Chaos Emerald Big was holding, and ran away.

Dr. Eggman sends a horde of his E-Series Robots after the frog to collect the Chaos Emerald. E-102 Gamma steals Froggy from Chris a and takes it to Dr. Eggman. The robots board the Egg carrier, with Chris and Big behind them, and all but Gamma have captured incompetent frogs. Onboard the ship, Gamma is spared from Eggman’s punishment cast upon the other robots, as he was successful in his mission.

Sonic and Tails search for the Chaos Emeralds in order to keep them away from Chaos, who grows stronger and larger each time he is fed a Chaos Emerald. They manage to find one, but Dr. Eggman attacks them with the “Egg Hornet” (first Boss from Sonic Adventure) and Chaos. Eggman and Chaos Sonic defeats them both, but Eggman gets away with the Emeralds. Later on, Sonic and Tails attack Eggman’s “Egg Carrier” with Tails’ plane, the X-Tornado, but they fail when Dr. Eggman fires a large laser cannon. Sonic and Tails survive, though Tails is injured. During their attack a small bird (meant to be used to power one of Eggman’s robots) was freed from Eggman’s ship, falling onto Amy. She keeps the bird and names it “Lilly.” Dr. Eggman sends another robot after Amy and the bird, capturing them while Amy and Cream were shopping. Eggman imprisons them on his ship. While there, Eggman sends Gamma to retrieve the bird, but Amy somehow talks him into setting them free. Later Sonic, Tails, and Knuckles head for the Egg Carrier again, this time making it onto the ship. Amy makes it to the exterior of the ship, with Sonic and Tails appearing shortly after,but Eggman takes Lilly from Amy, giving Lilly back only after taking the Chaos Emerald out of the bird’s necklace. Eggman calls for Gamma to attack Sonic, but Amy defends the robot, telling Sonic that he set her and the bird free. Sonic instructs Tails to take Amy and Lilly away from the ship, while Chris and Big attempt to rescue Froggy. They do so, but are confronted by Eggman when they try to escape the ship. He squeezes the Emerald out of Froggy and feeds it and other Emeralds to Chaos, making him stronger. Chaos captures Chris, Big and Froggy. Sonic and Knuckles appear from inside the ship and defeat the monster. Eggman and his robots forsake the damaged Egg Carrier, and Big stupidly flies away in the X-Tornado while playing with it.

Later, Gamma searches for all the E Series robots to delete the data of Dr. Eggman as their master. His search eventually leads him to the Egg Carrier again. Amy also goes to the Egg Carrier in search of Lilly’s brother and sister. She comes to find Gamma in a death battle with Beta, much to her horror. Gamma defeats Beta, releasing one of Lilly’s siblings that powered the robot. Gamma is critically damaged, and collapses into flames, releasing Lilly’s other sibling.

Later on, Sonic sees a vision of Tikal. Afterward, he discovers Eggman and chases him into a building where Eggman attacks him with his Egg Viper (Final Boss of Sonic Adventure), with Sonic defeating him. Eggman ends up floating around when he Chaos attacks him.

Chris finds the seventh Chaos Emerald at the X-Tornado’s crash site. Chris attempts to get the Emerald to Sonic, but Chaos breaks open the ground and takes the Emerald, along with the bag containing the rest of them. This leads to the final fight between Sonic and Chaos. Chaos, now having all seven Emeralds, floods Station Square and begins destroying it and all who attack him. A orb of light comes out of him, and Tikal appears from it. She says that Chaos was awakened by someone intending to use his power for evil. Chaos then regurgitates the powerless Emeralds. All Emeralds are found and given to Sonic. Because of the power of the friendship of those who gave the Emeralds to Sonic, the Emeralds are recharged. This shocks Tikal, as she thought the Emeralds could only be powered by hate. Sonic turns into Super Sonic, defeating the monster in an intense battle. Later, as a small puddle of liquid, Chaos falls on the ground, with Chaos forming again. This time, the creature is happy. Chaos appear out of the liquid on the ground, and they play with Chaos and the others. At the end, Tikal and the Chaos disappear back to their home.

This DVD includes these 5 Episodes:

“Revenge of the Robot” 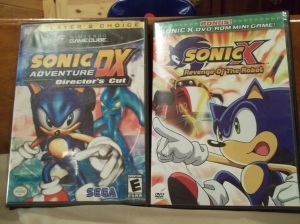 Each of these episodes come together to form the storyline of Sonic Adventure, and having played and beaten the game myself, I can say merging the plots of all six playable characters into one plot is a major accomplishment. This is done with accuracy while adding new elements that were already in Sonic X before these episodes were made. So Cream the Rabbit, Christopher Thorndyke, Professor Throndyke, and even more characters that didn’t appear in the original game are here. While Cream and Professor Thorndyke don’t do any damage to the game’s storyline, I will say that I cannot stand Christopher Thorndyke. He’s a bratty child of an actress and business tycoon. He basically messes things up, gets into danger that Sonic has to get him out of, and really did nothing valuable to the DVD to even justify his existence, much less make him a good character. Basically Chris is an accurate representation of what it would be like if I were to run around with Sonic. Eggman would catch me, I’d get into messes, and generally be an annoyance to the blue hero. But, Chris never really gets the full on 100% spotlight in this DVD like he has in others, so he’s not too much in the way. Lastly, this DVD does not include the episode “Pure Chaos,” which is the proper first episode in the Sonic Adventure adaption. Still, the plot gets explained well enough through flashbacks in the first episode included on this DVD.

Uh. You did read the title, right? SONIC. Sonic doesn’t use words little kiddies (or grown adults, for that matter) shouldn’t use. I think the only thing in here that may offend someone is that Sonic says “Holy cow” once.

Meh. At one point Amy daydreams of cooking a meal for Sonic and there is something that looks like wine bottles in the background. No biggie.

Nothing really to speak of here. Rouge the Bat makes a short appearance and Tikal’s clothing reveals her belly, but this is not meant in a sexual or seductive way.

These episodes are based on a more serious game, so there’s barely any humor alone to speak of. Once, Sonic refers to Eggman as “that fat-head.” That’s about it.

I don’t know whether you would consider this spiritual or not, but there are times where some of the characters are transported/see visions of a place with a girl who is protecting the Chaos Emeralds from her father’s clan of warriors.

Characters use lasers and missiles and many other things to attack each other. Tails gets injured when his plane crashes, though the crash is never shown. Sonic gets smacked a few times by Chaos, and Sonic defeats Chaos by spin-attacking his brain though it’s not shown in a gory way. Sonic destroys some of Eggman’s machines, Eggman tries to crush Sonic. There are explosions and robot battles– basic battle stuff. None is depicted in an unsuitable way.

So it’s safe to say that this is one of my favorite DVD’s that I own. It’s clean, enjoyable, and very long. My only complaints are the inclusion of Christopher Thorndyke and the fact that this set does not include all episodes relevant to Sonic Adventure. I will also so that the animation can get iffy. Sometimes it makes Dr. Eggman look pretty bad. But most of the time it’s good. So if you can find the DVD at a good price, go for it! Your kids may enjoy it too!

Sonic Adventure is hailed as one of the best Sonic Games, and this adaption sticks close to the game, so if you want Sonic Adventure's plot at your fingertips, check this out!