Gravity Falls is an American animated series created by Alex Hirsh and produced by Disney Television Animation. The series began on June 15, 2012 and ran until February 15, 2016. It has won numerous awards, including Teen Choice Awards, Kid’s Choice Awards, and Annie Awards. Gravity Falls ended after only two 20-episode seasons, though, as Hirsh wanted to finish the series on a high note and not let it grow stale. However, Hirsh has sug

gested in interviews that he might revisit Gravity Falls in future projects.

This article not only reviews the first episode, but also serves as an introduction to the show itself. Future installments will cover additional episodes, with the hopes of eventually reviewing the entire series. As I re-watch episodes multiple times for the sake of these reviews, I will do my best to convey the excitement and emotions of afirst-time viewer, so that readers will understand what it is that first attracted me to Gravity Falls to begin with.

Spiritual Content: Gnomes are magical creatures. The Pentagram and the Eye of Providence appear briefly. The Journal has a very Necronomicon (book of magic) feel to it. 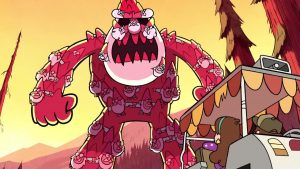 Violence: A monstrous creature chases the Pines twins. Gnomes tie up Mabel. The Pines twins beat up gnomes in various ways, to the point where one vomits. Mabel punches Dipper accidentally as she tries to hit a gnome.Grunkle Stan whacks Mabel on her hand for attempting to touch merchandise. All for comic effect.

Language/Crude Humor: Heck is the only word used. There is a Sascrotch joke, which is a Bigfoot mannequin in underwear.

Other Negative Themes: Dipper’s candid filming of Mabel and Norman. Underage Dipper driving a golf cart. The Mystery Shack itself is a tourist trap full of obvious hoaxes and frauds.

Positive Content: Listen to the advice of loved ones. 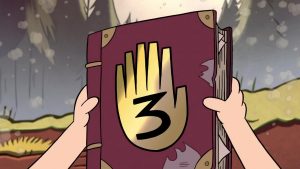 In the first episode, Tourist Trapped, the Pines twins (young teens Mabel and Dipper) spend the summer in Gravity Falls with their Great Uncle Stan (or Grunkle as the Pines kids affectionately call him). In this eerie Oregon town, the siblings work at the Mystery Shack, a tourist trap run by their Grunkle. As Dipper nails advertisements for the Shack to the trees, one of them turns out to be hollow. This leads to him finding a mysterious journal, which contains numerous records of cryptids and other anomalies in Gravity Falls.

Mabel immediately finds a boyfriend, Norman, in the new town, much to the suspicion of her brother. Dipper believes his sister’s new love interest is a zombie and he sets out to prove Norman’s undead nature. Alone in the forest, Norman reveals to Mabel that he is actually a gnome named Jeff, with his human body is formed by other gnomes. Upon rejecting the affections of the gnomes, they decide to kidnap Mabel and force her to be their Queen. 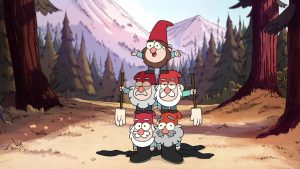 Armed with a shovel given to him by Soos (owner of the Mystery Shack), Dipper races to Mabel’s rescue in the Mystery Cart (a glorified golf cart). He finds his sister tied up by the gnomes in the woods, which refutes his zombie allegations. Dipper and Jeff argue over the freedom of Mabel, ending with Dipper shoveling the creature aside mid-rant. Dipper frees his sister, and they escape in the Mystery Cart. Much to the surprise of the Twins, the gnomes chase after them, assembled together in the form of a giant gnome monster. Controlled by Jeff, the gnome collective finally throws a tree at the Mystery Cart, causing it to crash.

Although the Twins make it back to the Mystery Shack, the gnomes corner them. Mabel then agrees to marry the Jeff, and he places the ring on her finger. She says they need to kiss before he can take her back into the woods, though. As Jeff prepares for the kiss, Mabel surprise attacks the gnome with a leaf blower and rockets him off into the air. The rest of the gnomes disperse, with no one to lead them.

Dipper and Mabel step back into the Mystery Shack, obviously disheveled. Grunkle Stan then permits them to take anything they want from the shelf. Thus, Dipper gains his signature blue pine tree hat and Mabel gains her grappling hook. As the twins go to bed, Dipper recounts the events of the day and Mabel “turns off” the bedroom light with her grappling hook. Just before the episode ends, Grunkle Stan enters a hidden door that leads downstairs, which suggest he is keeping some secrets.

The first episode sets up our four main characters. Dipper and Mabel Pines are twelve year-old twins. Dipper thinks logically and investigates anything strange, which contrasts with Mabel’s wackiness and eccentric personality. Wendy is a teenaged, part-time worker at the Mystery Shack who tends to act nonchalant. Soos is humorous while Grunkle Stan is sneaky. The shadiness of the latter in the epilogue starts the overarching story of the entire series. 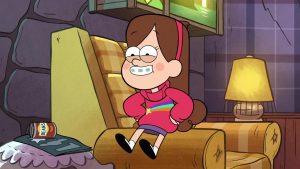 Normally, the humor in the first episodes of any series falls flat. This might be due to the writer still trying to find his or her footing, or the audience still trying to understand the nature of the world. Good jokes require a stable context. But, once Dipper discovers the mysterious book and an overarching goal for the series forms, the humor lands well. I still remember legitimately laughing at Mabel’s beans gag.

In addition to the humor, the overall writing is excellent. The directing and pacing are also well above average. The detailed settings do a great job of reflecting the mood of the story, even though it’s an animated show. The voice actors are great in their roles, especially Mabel. Alex Hirsh stands out in a positive way as Grunkle Stan simply because he plays so many roles. The quality of the writing, presentation, directing, and acting is consistent throughout the entire series. 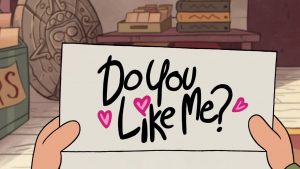 And amazingly, the story and the soundtrack get even better as the series progresses. This first episode, though, is just a pretty basic set-up of the characters and setting. It does the job of getting the viewer interested. Likewise, the soundtrack does the job. It isn’t too distracting and sets the tone for the story. This is not including the opening theme, which is very catchy and memorable. Admittedly, the action of the cold opening confused me a bit. But that was probably necessary to capture the attention of the viewer. The first episodes of any series need to quickly connect with the audience, which Gravity Falls accomplishes.

One spiritual application comes to mind as I watch the first episode: Mabel’s initial crush. In fact, her infatuation is a running theme throughout Gravity Falls. As the supposed zombie creeps closer to Mabel, she carelessly utters, “I like you…” As humorous as this line is, it does reflect how many youth get involved in dangerous situations or get into relationships with unrealistic expectations. Proverbs 22:3 says, “The prudent sees the evil and hides himself, But the naive go on, and are punished for it.” (NASB).

An engaging start to one of the better animated shows in recent years. I would recommend this show to anyone who likes unsolved mysteries and paranormal occurrences. Kids will definitely enjoy it. Even some high school students rave about the show, despite the target audience being 6 to 14 years-old. The show even adds in some humor adults will enjoy as well.

Armand J. Azamar is a freelance writer and artist from the Chicagoland area. Armed with the Word of God (and a love for superheroes, comic books and speculative fiction), he teaches at New Life Assembly Church and Kankakee Trinity Academy.